Ivory poaching is not the only problem in elephant conservation 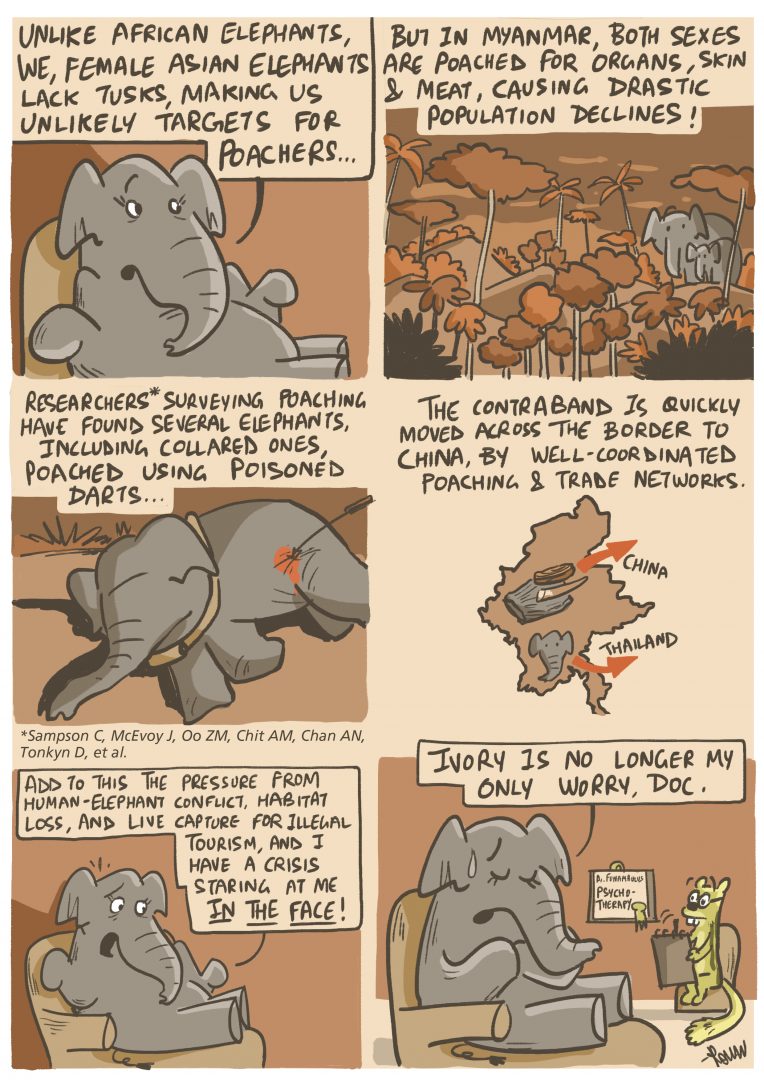 In Myanmar, an important range country, the wild elephant population has collapsed from around 10,000 in the 1940s to about 2000 today. In 2014, a community educational outreach program, Human-Elephant Peace (H.El.P), aimed at monitoring and reducing conflict with elephants, was initiated by a group of American institutions and the Myanmar Ministry of Natural Resources and Environmental Conservation. In this paper, Sampson, McEvoy and co-investigators report how they unexpectedly found out that 133 elephants had been poached between 2010 and 2016, 25 of which had been killed in 2016 alone. Mass killings of elephants in certain areas of Myanmar were also discovered.

Sampson and her colleagues surmise that poachers used common herbicides to poison elephants, using darts. They suggest that after 2-3 days, once the poison kills the elephants, the meat and skin are extracted and smuggled across the Myanmar-China border. In China, elephant skin is used in the treatment of dermal and intestinal diseases, as well as in jewellery production. Elephant feet are used as medicine converted to furniture, while the trunk and genital organs are consumed.

When Asian elephants are poached for ivory, only the males are killed and although the ratio of males to females becomes unbalanced, there are usually enough males to slow down the rate of decline. However, the current crisis in Myanmar, in which both male and female elephants are poached, for parts other than ivory, poses a comprehensive threat to the populations – the loss of both mature females and males of breeding age, combined with the slow reproductive rate and long gestation period will result in faster population declines. The authors conclude that developing legal frameworks and working with the government as well as local communities to stop poaching and trafficking is urgently required.

Tirtha Patel is a research and teaching assistant for Environmental Studies and Applied Mathematics at FLAME University in Pune, India.