India is home to some of the oldest known cities in the world but now the country is in a new phase of urbanisation. Growth is no longer limited to the former cosmopolitan metro regions but new centers of urban growth are added, with many provincial small towns growing into city stature. Cities are also ever more densely packed with more and more people moving in to search for the chance of making better livelihoods. India holds three of the world’s ten largest cities—Delhi, Mumbai and Kolkata— and three of the world’s ten fastest growing cities—Ghaziabad, Surat and Faridabad. The country’s rapidly increasing urban population, currently around 377 million people, is expected to reach 542 million by 2025 according to the UN.

In the past 20 years, the built area in India’s largest 100 cities alone has increased by almost 2.5 times or over 5000 square kilometres. The national network of highways and roads connecting these urban centres has also grown considerably, resulting in mosaic landscapes of cities, towns and farmland customised to service the needs of urban populations, inevitably transforming ecosystems and displacing wildlife species from their natural habitats. Growing urban populations and related lifestyles also typically consume more natural resources from near and far, and increase pollution. However, altered resource use by humans has consequences for ecosystem change and restoration in cities in multifaceted ways. For instance, a recovery of mangrove forests in the Navi Mumbai corridor in southeastern Mumbai along the eastern side of Thane creek since the mid-1990s may be linked to a decrease in the local dependence on fuelwood, due to a shift to compressed natural gas and electricity following urbanisation. The area has since become an important wintering ground for a large population of Lesser Flamingoes in Thane creek. However, the new proposed airport in Mumbai threatens to destroy much of the newly re-created habitat.

Different types of urban growth result in different impacts on ecosystems and biodiversity. For instance, former colonial fast-growing cities such as Pune and Bangalore have preserved green space in the city core due to large areas being held by the military and public sector companies. History and cultural preferences for specific types of landscaping and biodiversity are major factors shaping Indian urban ecosystems. In Delhi, the trees in the old city reflect a British colonial legacy, with the arrangement and choice of tree species planted differing markedly from the new gated communities at the periphery, such as Gurgaon. Similarly, in Bangalore, older parks are more wooded, while newer landscaped gardens may be dominated by neatly trimmed shrubbery, primarily appealing to the city’s wealthier residents. However, these and many other cities grow outwards, fracturing the surrounding natural areas into a fragmented mosaic. In many smaller cities like Lucknow, growth is largely in the city core through infilling, causing greater impacts on biodiversity in the center of the city, and inhibiting species movements through the urban landscape. In other areas, large and growing cities merge, such as the emerging city cluster of Pune-Mumbai.

India’s political economy is largely focused on maintaining double-digit economic growth rates, giving short shrift to the environmental consequences of such growth. Cities are now the key focal points of economic activity, as well as its environmental effects. The national capital, Delhi, is now vying with Beijing for the dubious distinction of having the worst air quality in the world, and many other Indian cities are not that far behind. As a result, cities bring new challenges for environmental conservation in a country that has been at the forefront of conservation conflicts and solutions for decades. Yet, most biodiversity conservation efforts remain focused almost exclusively on protecting wildlife in national parks and sanctuaries, ignoring the implications of the current pattern of urban growth for nature in and around cities. In addition, urban development policies and planning pay little attention to ecological consequences or consider sustainable urban growth as a key goal.

As outlined above, urban expansion presents difficult challenges for ecosystem integrity and resilience, ranging from increasing pollution of water and air, to the encroachment, degradation and transformation of woodlands, grasslands, coastal areas, wetlands and water bodies into urban concrete jungles. The few remaining green and blue spaces in many cities have been dramatically transformed into human-designed, landscaped and pesticide-intensive recreational zones. Pollution leaves habitats vulnerable to invasive species, such as the water hyacinth suffocating many sewage-contaminated urban lakes. Cities can also become nodes for the spread of invasive species, such as the exotic Lantana camara introduced to India as an ornamental garden plant, now choking forest understories throughout the country. Native bird species diversity has been shown to decline with an increase in exotic plant species in Delhi. This has disturbing implications for Bangalore, where 80% of the trees in parks are exotic.

Several challenges are exacerbated by climate change. A great deal of India’s projected urbanisation will occur along the coastlines through the growth of coastal cities and major port development. This threatens ecologically fragile coastal regions through destruction of sensitive habitats such as mangroves and sea turtle nesting beaches, and through increased demand for fish, turtle eggs and other seafood. Constructions close to the shoreline also leave cities more vulnerable to flooding and damage from natural disasters such as tsunamis, and to projected sea level rise from global warming. Further, the high population density in many Indian cities and towns creates particular challenges in an era of climate change. This is particularly true for coastal and river-bank cities such as Mumbai, Kolkata and Delhi, which face increased flooding during intense monsoons. Climate change also threatens cites in drier regions such as Bangalore, currently experiencing severe water scarcity due to irregular rainfall. Well-functioning ecosystems are critical in allowing cities to cope with climate change effects. Urban forests help reduce air pollution and decrease urban heat island effects, while urban wetlands and lakes reduce flooding, increase groundwater recharge, and stabilise soil. The most vulnerable urban residents tend to be socio-economically deprived, often living in areas such as slums, at greatest risk of flooding or landslides. Ensuring continued access to well-functioning ecosystems that provide services such as food, fodder, water and timber is critical in ensuring greater food and water security for the most vulnerable in times of climate change.

Ensuring better governance of urban ecosystems is critical. Environmental governance in India involves a complex network of people interfacing on multiple levels. Elected officials, judiciary, city municipalities and planners devise and seek to implement laws and regulations, but the involvement of community groups, corporate and public sector agencies and  NGOs is important to ensure knowledge sharing, implement regulations, and maintain people’s engagement. In this context, informal, loose coalitions of different social, economic and interest groups are increasingly influential in negotiating agreements at local to national scales. A classic example is the case of air pollution regulation in Delhi, mandated by the Supreme Court of India, followed by pressure from civil society groups. Indian media also play a key role in highlighting environmental and development issues through newspapers, television, along with the growing role of social media for dissemination by civic and activist groups. Community groups are also critical for knowledge dissemination and implementation of micro-scale sustainability initiatives that become very valuable when accumulated at a city scale, e.g., community-led efforts at wildscaping of local gardens in Pune, solid waste management in Chennai, and lake restoration and governance in Bangalore. They can significantly strengthen the governance capacity of local municipalities, who face knowledge, resource and manpower constraints that restrict their ability to provide effective urban environmental management. 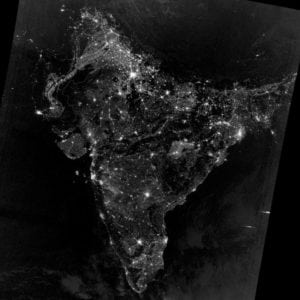 On November 12, 2012, the Visible Infrared Imaging Radiometer Suite (VIIRS) on the Suomi NPP satellite captured this nighttime view of southern Asia. The image is based on data collected by the VIIRS “day-night band,” which detects light in a range of wavelengths from green to near-infrared. The image has been brightened to make the city lights easier to distinguish.

India also has a long and rich tradition of stewardship of nature based in different cultural and religious belief systems. Even today, sacred groves are protected in many peri-urban areas and smaller towns, while massive, centuries-old sacred trees are commonly protected even in densely congested urban neighbourhoods; see the piece on Bangalore in this issue. Typically keystone species, the trees, are the basis for the native urban biodiversity and ecosystems. Furthermore, other habitats and species, for example bat roosts, macaques, langurs, and fish, are protected in certain areas. Water, wetlands and lake ecosystems are also prominent in many cultural traditions, which impose restrictions favouring sustainable management of fresh water resources and quality. Although disrupted by urbanisation, many of these practices continue to survive in Indian cities, and offer a unique path for sustainability in India’s urban future.

Maria Schewenius is a graduate from Stockholm Resilience Centre, Stockholm University and is interested in governance and management of urban social-ecological systems, maria.schewenius@su.se