Lion About in Livingstone

On the outskirts of Livingstone, Zambia, lies Damba Forest where impalas and kudus share a 700 acre enclosure with a pride of lions with radio collars. This is known as Stage 2, where the first generation of lions to be walked by ALERT’s conservation program have had a litter. These lions were walked as cubs through their habitat to familiarise them with the wildlife they would encounter upon release. In two years’ time, their litter will be the first lions released into the African wild without having any human interaction except for tranquilised medical checks. These cubs are raised solely by the pride that lives in the 707 acre enclosure that is regularly stocked with live game for the lions to hone their natural hunting instincts in order to survive.

The drop is due to the Asian black market and people’s belief that parts of exotic animals have medicinal benefits.

Daryl is based at the Thorntree River Lodge about 10 km outside of Livingstone, in the Mosi Oa Tunya National Park, where the program hosts its volunteers. He has extensive knowledge of African wildlife, having worked as a guide for over ten years in Kenya’s Maasai Mara Park. He is in charge of overseeing ALERT’s project, making sure it runs smoothly so that the release of the programme’s lions is a successful accomplishment.

“What about the lions that have been walked and hand-raised?” I ask Cara Watts, lion manager of the project, as we sit in the Land Rover with two volunteers and an intern, watching the pride in Stage 2, Zulu, the dominant male, shrugging our presence off.

“Lions possess the natural instinct to hunt and kill” she whispers.

“Our lions are walked through the Mosi Oa Tunya National Park,” Daryl explains the benefits of walking the cubs until they are 18 months old. “Here they come in contact with wildlife such as buffalo, elephants, giraffes and impalas. When the lions are about 15 months old they’ll even hunt while we walk them. To them, we are simply part of the pride that raises them.”

The current cubs that are being walked will be the last. Within a year they will be retired and moved to Stage 2 where the focus of the project will be to raise the necessary funds to build an electrified 9 kilometre double-fence Stage 3.

ALERT’s project is not just about the lions. It also focuses on giving back to the community by providing gainful employment which gives a sense of ownership and community and teaching in the local schools.

“Education is a very important part of this programme,” says Dr Jackie Abell, ALERT’s research manager. “The volunteers are given an education pack which they learn and then teach the local kids in the school. Some of the kids have no idea what kind of animals they have here. And even though it’s currently school holidays, these kids come in on their own time and of their own free will because they are keen to learn. We’re changing their attitude about conservation.”

“It’s grown a lot,” says Jeremy Tiger, a Canadian who had volunteered with the program when it was a year old after it began in 2008. He was walking Zulu when Zulu was just 14 months old. This time, he’s returned with his partner, Alanna Swarup. 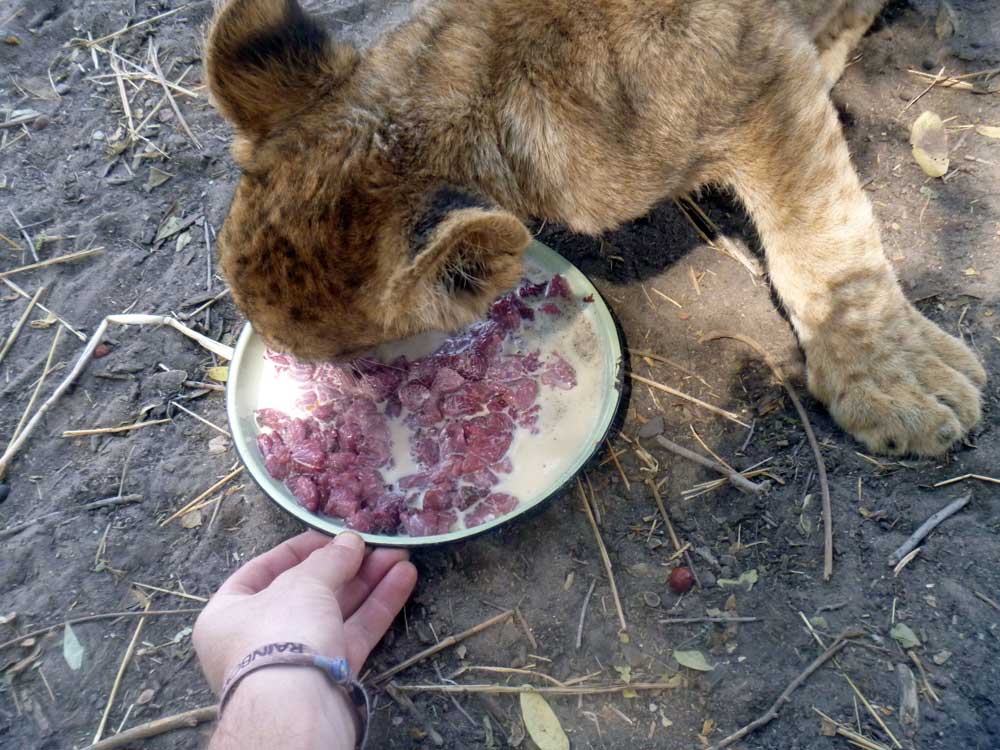 “He didn’t have to convince me,” she says. “He was always talking about it and we had some holiday time coming up so we decided we’d come here and help with the lions. I love that it’s hands on,”Simon OChen she says, adding “Even chopping up the donkey meat.”

The four stages to release lions into the wild are:

Lions as young as six weeks are taken on walks to build their confidence and allow their natural hunting instincts to develop.

Set in a 700 acre enclosure with plenty of game to hunt, the lions learn to develop a natural pride social system.

The lions are released into a larger eco-system (80 km2) in the Damba National Forest where they will learn to compete with other predators such as hyenas. The lions will give birth to cubs raised in a completely wild environment with no human contact – effectively making them wild lions.

After maturing at the age of five, the cubs born in Stage 3 will be released into the African wilderness of Damba National Forest with all the skills and human avoidance behaviours of any wild-born cub.

Simon OChen is a guitar-playing, nomadic, bartering (don’t like money) adventure travel writer hitching around the world by land and sea only. During his travels, he joins conservation groups in exchange for articles about their organisations, thenomadicdiaries@gmail.com.