The view from the top of a 5000 metre ridgeline is nothing short of breathtaking. The outstretched valley below glitters like speckles of snow on the floor, and the emerald river meanders its way through rocks. In these high mountains, stories of the ghosts of mountains past become more visceral. Snow leopards slowly stalk the mountain for their ungulate prey, with impeccable camouflage and grace. One is truly inspired by the romance of being in, and working in, the mountains. 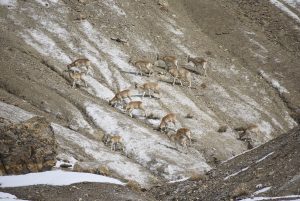 A mixed-herd of Ladakh Urail (Ovis orientalis vignei), one of the few species referred to as the mountain monarchs and a key to the trans-Himalayan ecosystem. They influence vegetation structure, plant species composition and nutrient cycling, while also being determinants of predators (including the rare snow leopard’s) population density.

Romanticism aside, mountains are the water towers of the world. They impact the lives of millions of people below. They are home to communities that graze livestock and cultivate the land. Studying and conserving high mountain species is an important first step in ensuring the conservation of our own communities.

Researchers from Nature Conservation Foundation’s High Altitude Program have been working across Ladakh and Spiti, in the Trans-Himalayas of North India for over 2 decades. A lot of the research has tried to understand status of and threats to ungulates – wild sheep and goats- and the enigmatic snow leopard, living in these mountains. Ungulates are particularly important as they are key determinants of predator populations (including snow leopards) and help in maintaining vegetation structure and nutrient cycling. Knowledge from the research subsequently forms a basis for community engagement. This facilitates interventions such as community-governed grazing free reserves, that help conserve ungulates and in turn their predators. 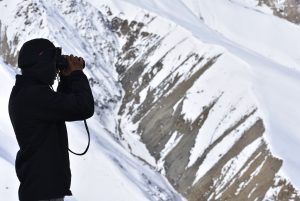 Pictured here is 26-year-old Rigzen Dorjay from Saspochey village, Ladakh, that has been working towards monitoring and conservation mountain ungulates in his native Ladakh for nearly 5 years now.

Nevertheless, working in these mountains has its share of challenges.

Although beautiful, the desolate beauty of the high altitudes holds some hard earned lessons you have no means to learn outside of a mountainous landscape. The skill required to walk through knee deep snow, balancing precariously as one ascends a frozen river, having to recalculate footing multiple times to ensure non-occurrence of fatal slips. There is also an immense test of patience to spot a snow leopard with your own eyes, undeterred by knowing that a clear view only comes after several weeks (not days!) of scanning the slopes and being constantly battered by frigid winds. It takes persistence, courage and above all belief in oneself, for it is only belief that will help you cross a very difficult ridgeline. While there are often days with no sighting of even the tracks of your study species, being able to spot a well- camouflaged herd in the mountains still becomes a sort of an addiction.

Field sites take days of driving to get to. Teams have been stuck for over 15 days in a village, to which either side was cut-off to cars by landslides and avalanches. Supplies are hard to come by. In a landscape where you have barely enough oxygen to breathe, fresh vegetables are a luxury. Most field sites are so remote that one often camps for several days. In the colder months (which sometimes include summers), this often means that when dawn breaks, you may find yourself waking in a sleeping bag lined with a layer of ice. The oil used for cooking dinner turns as hard as a brick, and you might as well forget your morning brushing routine, for the toothpaste that you would like to use is frozen as well. 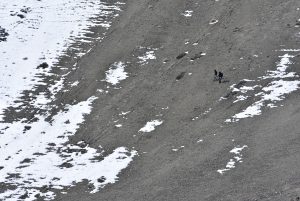 As mountain ungulates in the trans-himalayas are found in extremely low densities, it is important to be vigilant while finding them. Often tracks made by their hooves and their dropping on mountain slopes are indicators of their presence.

Nonetheless, if you find some courage to thaw your seemingly paralyzed fingers and toes, you will soon realize that doing good conservation sciences in the mountains isn’t merely about trekking its slopes. No matter what your purpose may be, whether it is estimating the population of snow leopards and their prey, or understanding disease transmission between livestock and wild ungulates, one must ensure that the data they collect is robust. This means that in addition to the cold, the altitude, and the rugged terrain, robust application of appropriate methods remains. A key to ensuring this is working as a team, especially one that involves locals. Through this we keep each other’s spirits high, learn from failures and use experience to tweak existing methods. This ensures applicability of methods in these harsh landscapes; knowledge from which, is one of several tools used to conserve the mountains and its denizens.

Manini Bansal is a Visual Communication Designer and Photographer. She works with Dakshin Foundation as their designer and is the Art editor and Managing editor for Current Conservation.