Some say putting a wood to good use is the best way to control it. Can this novel strategy result in a win-win for multiple interest groups?

Management decisions do not conform to a ‘one size !ts all’, and a suite of different strategies-including exploitation of the invasive at some stage of its invasion -rather than a single strategy, could be regarded as an approach to minimizing the net costs. Optimising management strategies for invasive species requires evaluating the full range of costs and bene!ts of alternative control options. #e following questions can be considered: a) what are the threshold levels of invasion that war-rant management (when benefits due to investments in control exceed the damage costs) and, as a corollary, b) at what threshold (or when), should management effort be considered to have failed (i.e., when are benefits due to control actually less than the damage costs)?

We expect the ecological impact of an invasive species to be low at an early stage soon after introduction but before it has spread widely (the ‘lag phase’). The impacts of the invasive species are likely to increase during the subsequent exponential growth (‘logistic’) and stabilisation (‘equilibrium’) phases (see figure). In the early stages of invasion, eradication is generally preferred, both because the marginal costs are low and because the potential benefits are large. Ironically, often no management effort is initiated at this stage, either because the ecological costs are small or because they are not yet perceived. As both the abundance and the impacts of the invasion increase, management investments start being made. Most management, though expensive, tends to be deployed during this phase. In the last, stable phase, management interventions are not only very expensive but tend also to be the least successful. 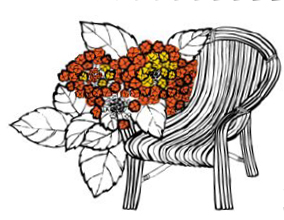 From a management perspective, the increasing ecological cost of invasive species should be weighed against any benefits that may accrue. In the range of options available for management, one can allow for the entire spectrum from complete eradication to adaptive management (wherein the species can actually be gainfully used; http: //tncweeds.ucdavis.htm). Today, a number of species are notorious for being invasive across the world, and notable among them are Eichhornia, Prosopis, and Opuntia. Control tor management of these invasive species, especially in tropical human-dominated landscapes, with traditionally poor economies, has been nearly absent or woefully unsuccessful. Over time, though, at least some of these invasive species have blended into the local ecosystems and become integrated into the livelihoods of people for two reasons.

First, invasive species tend to be abundant and freely available for harvest. Second, invasive species can offer a suitable, if not a perfect, substitute for existing resources that are scarce or expensive. Abundance and substitutability result in the low opportunity cost of collection and utilisation.

If you cannot break it, at least bend it

The invasion and the current spread of lantana across the world represents a typical case of a successful invasive species. Management options for lantana are few, expensive, and possibly futile. One potential management strategy, therefore, would be the utilisation of lantana. Could this lead to adaptive management of lantana in a manner that would reduce the net cost of the species by partially offsetting both control and damage costs? We present a case study of a recent initiative that encouraged the use of lantana among marginalised communities in southern India. A number of forest dwelling communities in India depend almost exclusively on forest resources for their livelihood. On such a community, the Soligas were hereditarily dependent on bamboo and cane resources. In recent years indiscriminate extraction has severely depleted the natural stocks of cane and bamboo and has directly threatened their principal source of livelihood. An appropriate substitute for the declining wild bam-boo and rattan resources could make a substantial di$er-ence to the Soligas. 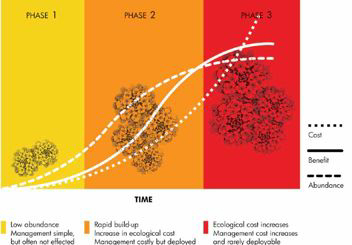 We explored the possibility of using the locally abundant invasive species, lantana, as a substitute for bamboo and canes to maintain or even enhance the livelihoods of these communities, while alleviating the stress on beleaguered populations of bamboo and canes. Kannan and colleagues promoted the use of lantana as a substitute for bamboo and canes and designed appropriate lantana products for rural and urban markets. Over 350 men and women were trained in the use of lantana at several field sites in South India. More than 50 different products, from baskets to furniture, were developed. The average number of person-days of employment in lantana craft increased from about 30 in 2004 to more than 80 in 2006. Over the same period, the mean annual per capita income from lantana increased from US$ 17.90 to US$ 63.93, a significant jump.

Viewed in the context of managing invasive species, this initiative offers an unconventional approach to minimising the net cost: the use of lantana could allow for the regeneration and recruitment of native species and mitigate other ecosystem damages such as pollinator loss; the harvest of lantana could provide a window of opportunity for the regeneration of at least some native plants; and the extraction of the weed might help in reducing the incidence of forest fires, which otherwise are fanned by lantana and also offer greater accessibility for both animals as well as people. Of course, these mitigating effects would depend on the scale and the ways in which lantana is eventually used.

From exclusion to inclusion

Any action (including promoting the use of the invasive) that can reduce the ecological cost of the invasive is a potentially useful strategy. A shift in our view of managing invasive species, from one of exclusion to that of inclusion may be pragmatic, particularly in tropical human-dominate landscapes where low income and the abundance of the invasive species constrain effective control, while the lack of rural options encourages utilisation. For example, Geesing and colleagues defend the use of Prosopis thus, “Notwithstanding the unquestionable ecological changes produced by Prosopis invasion, where the species has been introduced it is necessary to make the best of a situation that is hardly reversible.”

R Uma Shaanker is at the Department of Crop Physiology, and School of Ecology and Conservation, University of Agricultural Sciences, Bangalore,
India. Mail at umashaanker@gmail.com

Gladwin Joseph, NA Aravind, and R Kannan are at Ashoka Trust for Research in Ecology and the Environment, Bangalore, India.

KN Ganeshaiah is at the Department of Forestry and EnvironmentalSciences, and School of Ecology and Conservation, University of Agricultural
Sciences, Bangalore, India.