Over the past ten years, a series of very large marine protected areas (> 100,000 km²) have been declared around the world, many of them the ‘world’s largest’, at least for a brief period. There are currently 21 large MPAs, with several more under development. What motivates this ‘race’ to establish more, ever-larger MPAs? There are several conventional answers to this question. First, MPAs are widely agreed to be an effective conservation tool. An MPA is any clearly defined marine space that is managed for conservation purposes. MPAs include: marine reserves or ‘no-take’ areas, where no extractive resource use is permitted; zoned MPAs, where different types of use are permitted in different areas; and multiple-use MPAs, where extractive resource use is permitted but managed throughout the MPA. No-take areas in particular are known to have significant benefits for both biodiversity conservation and fisheries management, and many large MPAs are no-take (e.g. Papahānaumokuākea, where only non-commercial uses by native Hawaiians are permitted, and the Phoenix Islands Protected Area, which was closed to all commercial fishing at the end of 2014). Second, there is pressure to reach international marine conservation targets. As of 2014, 3.4% of the world’s oceans have been enclosed in MPAs. The Parties to the Convention on Biological Diversity have a goal of protecting 10% of coastal and marine areas by 2020, while the IUCN declared a more ambitious target of 30% of the world’s oceans as no-take at the 6th World Parks Congress in 2014. Third, there is undoubtedly a need to ‘scale up’ conservation in response to the current oceans crisis – a crisis that includes declining fish stocks, marine biodiversity loss, ocean acidification, and loss of habitats (e.g. coral reefs), among other challenges. However, there are many additional political, economic, and social factors that must be considered if this movement to ‘scale up’ marine conservation is to be understood. 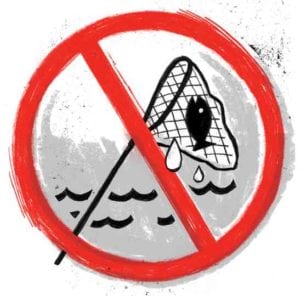 For some observers, large MPAs are an obvious and appropriate tool for helping to address the oceans crisis. They are responsible for much of the recent increase in global MPA coverage, playing a critical role in moving toward conservation targets. They protect open ocean and deep sea habitats, migratory species, and can encompass entire ecosystems. Because they are often located in remote areas, far from human population centers, they are sometimes perceived as politically easier and less expensive to establish than coastal MPAs. In short, each new announcement of a large MPA is heralded as a conservation victory. Is this declaration of victory premature?

If these very large MPAs are to be successful in the long term, then we suggest there is a need to better understand their human dimensions. Experience with smaller, coastal MPAs has demonstrated that failing to account for human interests and impacts can undermine conservation goals. Coastal areas have diverse and easily recognised human uses (e.g. fisheries, tourism) and values (e.g. economic, cultural), which have been well documented. In contrast, there has been a tendency to conceptualise large MPAs as marine wilderness, where humans and their interests are absent. This is a false and dangerous idea—we must think of all oceans as peopled seascapes and all conservation projects as human projects. Human dimensions of large MPAs may be different and less visible, but are no less important to consider than for coastal MPAs. For example, uninhabited islands in the Marianas Trench Marine National Monument, a large MPA in the Pacific, have important cultural value for indigenous residents of Guam and the Commonwealth of the Northern Marianas Islands. Unfortunately, the human dimensions of large MPAs are poorly understood. If large MPAs are to deliver their intended conservation benefits, then there is a need for research on their human dimensions – governance, politics, and social and economic outcomes. 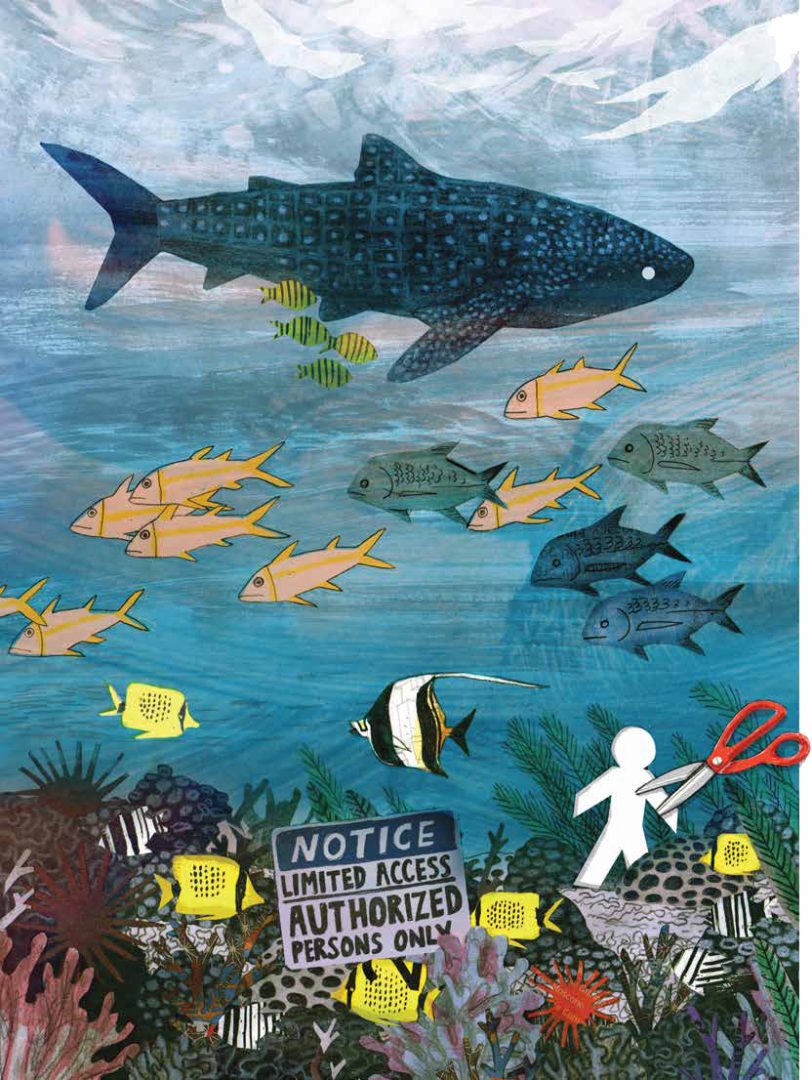 Governance is more than government, encompassing all stakeholders and processes that contribute to decision-making and outcomes for a given system. MPA governance is complex, incorporating inter-related social and ecological systems. Research on coastal and inshore MPAs has demonstrated that effective MPAs must have clear resource use rules, monitoring 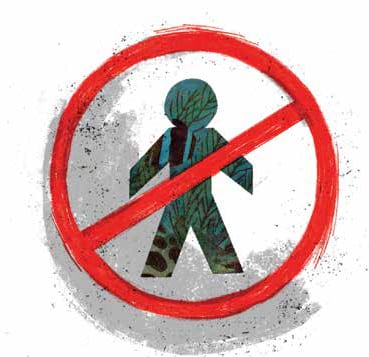 First, there is concern about how such large areas can be effectively monitored and their rules en – forced. In coastal areas, resource users often play a key role in monitoring and enforcement. This is neither feasible nor relevant for offshore areas, where resources and their users are different (e.g. industrial tuna fisheries vs small-scale fisheries). ‘Technological fixes’ are being increasingly promoted for large MPAs, with many civil society groups cooperating in the development and pro – motion of technical tools of surveillance (e.g. using satellites for monitoring). Whether such tools can be effectively connected to enforcement mechanisms, and how they will be viewed (and supported or opposed) by resource users, remains to be seen. 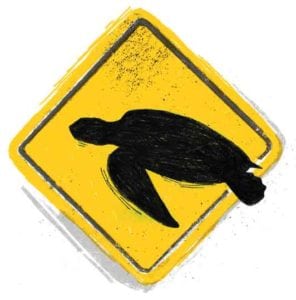 Second, many large MPAs have been established through top-down political processes, in a manner that has been found to be ineffective and conflict inducing in coastal MPAs. With similar conflicts emerging in some large MPAs, the danger of ignoring human interests for large MPAs is apparent. However, participatory and consultative processes are difficult for very large, remote areas with widely dispersed stakeholders – who should be included and how?

Third, large MPAs have the potential to affect (and be affected by) other national and international policies and agreements in a way that coastal MPAs do not. These institutional interactions must be considered. For example, a proposed large MPA in Palau would ban fishing in 80% of the Exclusive Economic Zone (EEZ) and prohibit purse seine fishing throughout the entire EEZ. Such policies would have impacts on industrial tuna fishing, with the potential to shift fishing effort elsewhere (to other countries) and to interact with regional fishing agreements. The manner in which governance of large MPAs intersects with international trade and resource agreements must be considered.

Large MPAs are declared by governments, and are therefore a function of formal politics. However, they are also embroiled in informal politics – the power-laden interactions of all actors involved in the governance system. Coastal and inshore MPAs are often a source of conflict, as diverse actors 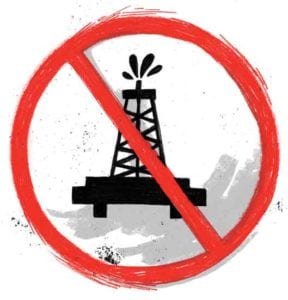 seek to protect and advance their interests (e.g. maintain fishing access vs. limit extractive use). While political interests, motivations, and processes may differ for large MPAs, they will likely be just as significant for conservation outcomes.

While the increase in large MPAs can be partially understood as a response to global conservation targets, other geopolitical processes are also important to consider. For example, small island states that declare large MPAs make themselves more visible and relevant on a global stage, often attracting conservation funding and reinforcing their sovereignty. Non-governmental organisations (NGOs) and philanthropic foundations, which are promoting and supporting these large MPAs (including research, consultation processes, financing, and enforcement), are asserting their interests and visions through these projects. In some cases, indigenous communities are using large MPAs to assert their claims and challenge state sovereignty, while in other cases large MPAs serve to reinforce colonial relations. For example, the British Indian Ocean Territory Marine Protected Area, established around the Chagos Islands by the UK government in 2010, has been criticized for undermining the claims and rights of the already displaced Chagos people. A recent decision by the United Nations permanent court of arbitration ruled that the UK acted illegally in establishing the reserve. If large MPAs are established without attention to the rights and interests of all stakeholders, they risk exacerbating conflict and building resentment rather than support for conservation. 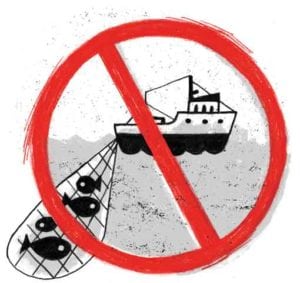 Outcomes include all impacts – social, economic, political, cultural, as well as ecological – of large MPAs. Coastal and inshore MPAs can have both positive impacts (benefits) and negative impacts (costs). Benefits for people include things like increased food security and revenue from tourism, while costs include lost income from reduced fishing, social conflict, and unequal distribution of costs and benefits among different social groups. Because large MPAs tend to be offshore, away from human communities, their costs and benefits will differ. However, it is still necessary to identify and understand these impacts (whether current or potential impacts), in order to make informed decisions about large MPAs.

Impacts of large MPAs may include the costs of administration and management, changes in revenue for actual or potential industries (e.g. fishing, seabed mining, tourism), financial arrangements with multilateral institutions or NGOs, and the protection or undermining of cultural values and traditional practices. Negative impacts should be mitigated or addressed, while clarifying positive impacts can justify the establishment of the large MPA and help to build support for marine conservation. It is important that projected impacts are realistic, based on evidence and research, in order to set realistic expectations. In the long term, unfulfilled promises are likely to undermine support for large MPAs.

Decades of research on coastal and inshore MPAs has illustrated that human dimensions must be accounted for if MPAs are to be effective. Given the recent and ongoing development of large MPAs, there is a timely opportunity to conduct policy-relevant social science research to inform their advancement.

While social science research cannot prevent conflict or guarantee the fulfillment of promises, it can contribute to the clarification of expectations, processes, impacts, and possibilities. We must think of all ocean spaces as ‘peopled seas.’ 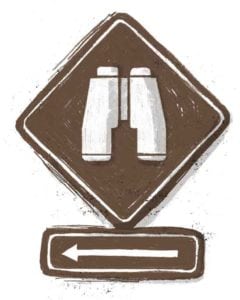 Noella Gray is Assistant Professor at the University of Guelph, Canada. Her research examines the politics of marine conservation and governance, from local to global scales, grayn@ uoguelph.ca.

Rebecca Gruby is Assistant Professor in the Department of Human Dimensions of Natural Resources at Colorado State University.

Lisa Campbell is Professor in the Nicholas School of the Environment, Duke University.

Leslie Acton is a doctoral student at the Nicholas School of Environment, Duke University.