Mass slaughter of an ancient mariner 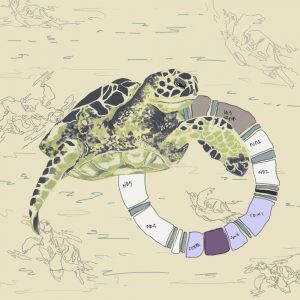 Reports of a mass slaughter of sea turtles in Malaysia in 2014 were received with dismay. Scattered across the island of Pulau Tiga in the Balabac Strait of Malaysia, 53 carcasses of immature and adult green sea turtles had been found at different stages of decomposition. The discovery suggested that poachers were illegally taking turtles from the wild at different times and leaving them on the island, possibly until they could be collected by a larger boat. Two turtle carcasses had tags, and the inscribed information showed the animals had previously been tagged by biologists studying nesting turtles in the Turtle Islands of Malaysia and the Philippines. But had the turtles been captured while they were at Pulau Tiga or more distant waters? And where did the other turtles originate from? Determining the source of the turtles would help understand the number of turtle populations that might be affected by such illegal poaching. Therefore, Malaysian researcher Dr. Juanita Joseph and her collaborators used wildlife forensics to compare genetic samples from the turtles found at Pulau Tiga with a database containing DNA sequences collected from turtles in the Pacific and Indian Oceans. The turtles found at Pulau Tiga matched the genetic composition of turtles feeding in Brunei Bay of Borneo island, and this could possibly have been the population targeted by the poachers. But turtles are migratory – breeding and hatching at one location while spending the majority of their lives feeding in another. Genetic results indicated that the turtles had hatched from beaches throughout the Sulu and Celebes Seas, Malay Peninsula, and South China Sea before taking up residence in Brunei Bay or somewhere with a similar genetic mix of turtles.

So the researchers found that illegal poaching of turtles in Malaysia, such as those found at Pulau Tiga, could affect green turtle populations in different locations across Southeast Asia. Dr. Joseph and her co-authors are not certain that the recently established Tun Mustapha Park around Pulau
Tiga will be an effective conservation measure as there is little information available about how sea turtles utilise these protected waters. Since green turtles are a slow-maturing species and the loss of breeding females is a serious conservation threat, they conclude that further studies of sea turtle
movements are needed for effective management. In addition, regional collaboration and enforcement of existing measures of protection are also required.