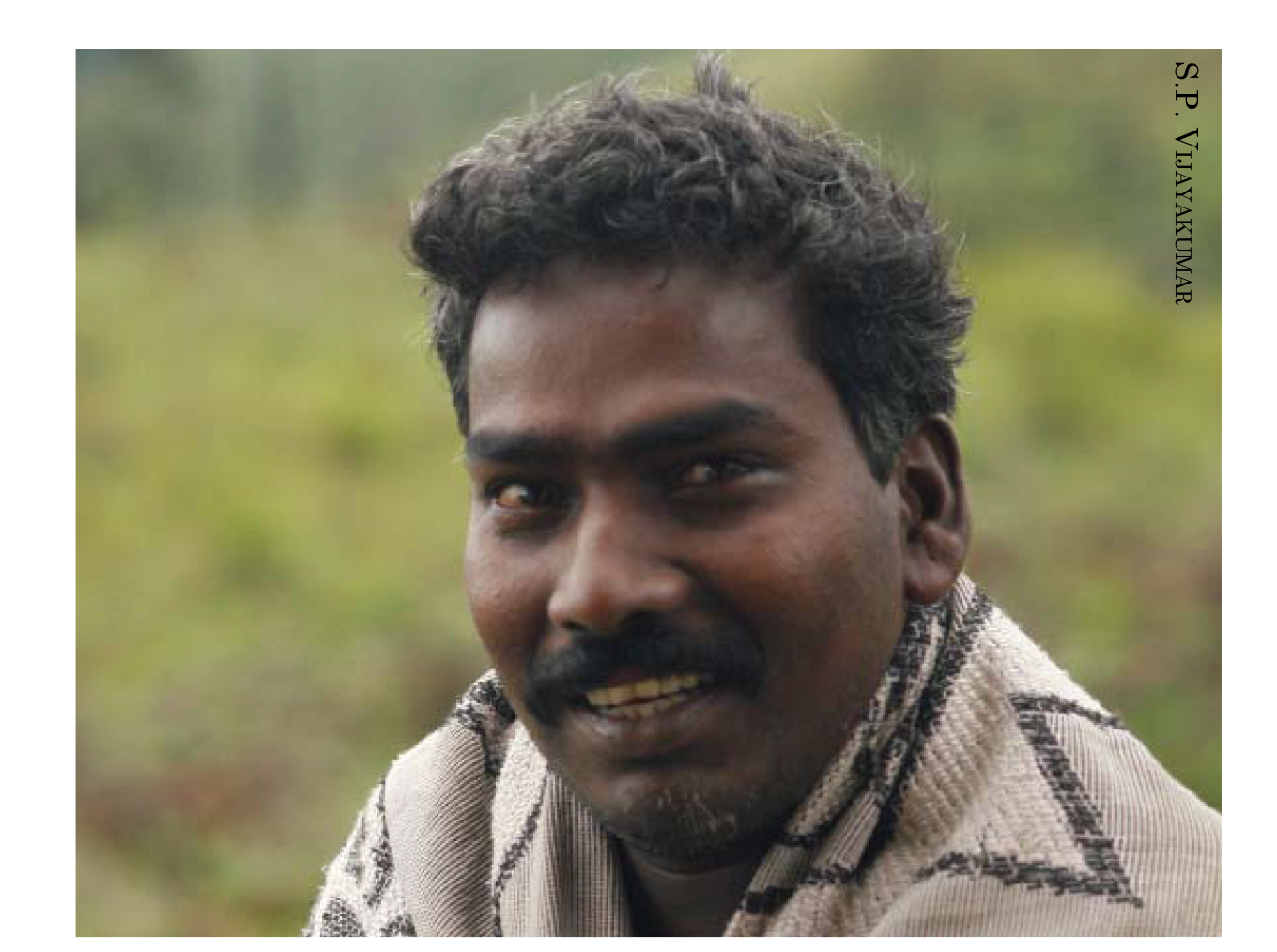 It was pitch dark and unusually silent except for the distant cricket calls deep in the forest. There were three of us, including Mayavan. Chaitra and I were surveying for frogs in a Myristica swamp located in the lowland region of the southern Western Ghats. It was the first time I was venturing into this habitat in search of these frogs, especially the tiny tree frogs of the genus Philautus. The mission was to inventory the species and record their calls. Surprisingly we did not hear a single call and as I scanned the area for calls, my halogen headlamp showed an alert Mayavan searching the area around us with his own flashlight: not for frogs but for something else, somewhat larger. We had been warned by the forest watchers about the movement of pachyderms in the neighbourhood. But our curiosity couldn’t stop us from venturing into these forests. More than anything, it’s Mayavan’s presence that gave me the confidence to pursue this crazy game of frog hunting in elephant country. As I asked myself why the frogs were silent, I felt something soft on my shoulder! As my headlight turned in the direction Mayavan’s light was pointing, a few seconds passed, and there it was! A single eye glint amidst the thicket not very far from us, and though we couldn’t judge the distance in the dark, it was not far. We all froze for a few seconds, and a disturbing silence followed while we waited for Mayavan’s signal.

Within seconds, we were running through the trail laden with thorny vines… a high jump over a fallen tree…and the final 100 metres rush to our vehicle. Mayavan was the last, and he looked a little crestfallen. I asked him what happened? Scared? He replied in his humorous tone that he had lost one of his slippers. We all burst into laughter. That’s Mayavan – Phantom – a guy who can get you out of the trouble and at the same time ease the moment with his humour.

Over the last two years, every field trip has shown me a new, more interesting aspect of Mayavan. A few field trips for frog catching and call recording made him an expert in locating frogs by their calls. It just took him two days to get a hang of it and find new ways to locate them. At times, he surpasses me in the number of individuals he locates by calls. Slowly he has ventured into the world of specimen processing. I feel guilty sometimes when my late night work keeps him sleepless. But, his enthusiasm and patience gives me the much-needed energy in the field to push my own limits. With Phantom around, my life in the field becomes more than just routine data collection. With his humour, his enthusiasm to understand and learn, his patience, his rich experience, and those sharp watchful senses, it is no wonder that he has remained a “silent partner” on many research sagas like mine.

Driving back from the field in our gypsy, Mayavan was lying in the back and staring through the skylight in the canvas top, and I heard a refrain of ‘yes no yes yes yes no no’. After a while, I became intrigued and asked him what he was doing. He responded that he was estimating the canopy cover on the way back to the field station. Just that day, he had accompanied a researcher and watched him do canopy counts through a scope. As I discovered over a 3 year period, Mayavan had an exceptional ability to pick up our research techniques and adapt them with little or no instruction.

Mayavan first started working with me when I was conducting fieldwork for my doctoral thesis at Upper Bhavani in the Nilgiris. Unlike many other field assistants, he was neither a tribal nor a local. No body of knowledge had been passed down through the generations. Everything he had learned, he had learned on his own, mostly after he dropped out of school after high school. His father was a driver with the Electricity Board, and he had lived with him in the area and started wandering around out of curiosity. When I met him, the only person who knew this region better than Mayavan was Kasi, an old poacher turned field assistant.

Mukurthi is a lovely sanctuary on the western edge of the Upper Nilgiris plateau with rolling grasslands and postcard pretty sholas nestling in the valleys. Few researchers had worked in the area, as many parts of the sanctuary were inaccessible and somehow did not have the glamour of the lower elevation elephant-dominated forests such as Mudumalai and Anamalais, or the evergreen forests of Kalakkad.

My own work there was on small mammals, mainly rodents. We carted over 200 sherman traps from shola to shola, setting them up in 1 hectare and 0.5 hectare grids, and monitoring them each morning. We trapped for over 35000 trap nights, in the sholas, grasslands and a range of plantations in the Upper Nilgiris. Mayavan and I became experts in handling the rodents – sliding our hands into the traps, nestling the rats in our palms and then slipping off the connecting rod that would open the trap, leaving the rat in our hand. Wrougton’s rat, the whitebellied form of the common rat, and our most frequent visitor, is an aggressive customer, and needs to be handled with care. A little slip and you were guaranteed a nasty bite. Mayavan was much fonder of the mice, which he would handle like pets, while he positively hated the shrews, which were the most aggressive and smelly. In fact, he was pretty good at smelling the trap and predicting which species had been caught.

After I left, Mayavan helped a series of researchers with their research and Doctorates in the Upper Nilgiris. He worked with Nixon and Bhupathy of SACON on a herpetolog y project and with Uma on the Nilgiri pipits. Today he works at the Centre for Ecological Sciences with my PhD students. He is a fair expert on herps, particularly frogs. He continues to be the premier field assistant for rodents, and is occassionally called on to assist with trapping studies. More than anything else, it is his quick grasp of field methods, his curiousity for the science and his deep commitment to boththe project and the researchers, that make him so valuable.

Kartik Shanker (kshanker@ces.iisc.ernet. in) is Assistant Professor at the Centre for Ecological Sciences, Indian Institute of Science, Bangalore, India, & a Trustee of Dakshin Foundation, Bangalore, India.

S.P. Vijayakumar (vj@ces.iisc.ernet.in) is a PhD student at the Centre for Ecological Sciences, Indian Institute of Science, Bangalore, India.