As I stepped out of the car onto the fertile soil of Chikhodra village in Anand district of Gujarat, I was explaining to my team how field work is all about improvisation. My coresearcher in this project was a 25-year old woman named Manya Singh, a trained ecologist and terrified of reptiles. We had come together to understand the implementation of the National Agroforestry Policy 2014 in Gujarat. Our third team member was a recent graduate of Agriculture Science, named Praful, who was proficient in the local language. We were going to interview farmers to understand what trees they planted on their farms and their experience with the practice. Manya suggested that we sneak in a quick smoke first. “Aditi, could you be a doll and get me a Marlboro from that store over there? I’ll get the survey sheets in order till then,” requested Manya. 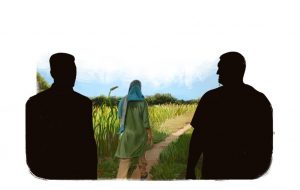 The store, however, was thronged by men who were already staring at us, which made me terribly uncomfortable. You’d think as a woman living in India I’d be used to these stares.
But no one ever gets comfortable with objectification, no matter what they tell you. So I reached out to Praful, “Praful, could you be a doll and get Manya a Marlboro from that store
over there?”

Praful had other concerns. “Of course, I can go. But the bigger question is, why would Manya smoke a Marlboro when there are tobacco farms all around us?”

“You’re right, we are in Anand! It has a dedicated Bidi Tobacco Research Centre built way back in 1947!”

“Of course, that’s the first thing you do after your country gets independence!”

While the non-smokers of the team intensely discussed tobacco history, Manya had gotten the survey sheets in order, gone to the store to get her cigarettes, smoked one, spoken with a couple of men there, figured out the village demography with leads to which farmers we should talk to. I admired her gumption, patriarchy be damned.

As we crossed paddy fields and plantation farms, I couldn’t help observing that a steady supply of water from Gujarat’s Narmada canal-system made all plantations possible in Chikhodra for now. Anand district had an efficient canal system, making irrigation possible for successful tree farming, unlike many of other places in Gujarat, which did not even have drinking water.

The three of us were walking along one of these canals in a single file as it was a thin walking space between the canal’s wall and the adjoining palm plantation. I was walking in front explaining how water-intensive palm plantations might not be a good idea with the climate crisis staring us in the face, how this is in direct conflict with the objective of the National Agroforestry Policy.

Suddenly Manya let out a short high-pitched squeal. It was an annoying mixture of a bark and a moo. Scores of rose-ringed parakeets perched on a nearby palm tree instantly flew off, scared by this human siren. I turned around to see her face turn several shades of green resembling the paddy fields we had just crossed. After three whole minutes of trying to find her voice and two more in making sense of it, she finally blurted, “There’s a snake in the water.”

Brilliant, I thought, and turned on my mobile camera, rushing to the spot. Manya seemed horrified by this and began exclaiming, “Aditi, are you crazy? Did you not hear me? There’s a snake in the canal and it was huge and it was moving like Kraken! ” 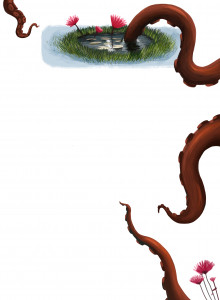 “In Pirates of the Caribbean!”

“Kraken, the sea-monster who arises at the world’s end in the Johnny Depp movie!” I wanted to feed her to whosoever this Kraken person was right then, but I had signed
ethical social research regulations. So, with all my patience, I politely asked, “Manya, the snake! Who was the snake? Was it a banded water snake? With bands or it? Or was it plain grey like the plain-bellied water snake?”

“It was like Kraken, huge and wiggly! I’m out of here.”

“You do realise there can be a family of snakes here right? All the best wandering off alone!”

The look on her face as she imagined a family of “Krakens” was the best moment of my day. Thanks to Manya’s loud drama, we found ourselves surrounded by several men from nearby farms. We quickly explained to them our purpose in their village. One particular man introduced himself as the son of the Sarpanch [an elected leader of a taluka/village] and offered his suggestion, “You can finish all of your surveys right here with us, we will help you.”

I thanked him and explained that we wanted to speak to women farmers as well. They laughed among themselves while we looked at them with a straight face not getting the joke. The Sarpanch’s son tried again, “Madam, I’ll help you get all the data, there is no need for you to waste your time walking all over the village. My house is nearby, we can all sit there and talk. My wife makes excellent tea!”

A simple study on trees was going to be a lot more than just trees. We could have sat there and discussed the Sarpanch’s son’s understanding of gender roles and how the work that India’s women do on farms often goes unnoticed.

But Manya slyly said, “Thank you so much, Sir! We would love to go to your house. Thank you for making our work easy, we would’ve been lost without you!”

And then she quickly winked and whispered into my ear, “Let’s go to his house, there’s bound to be women there, we’ll talk to the lady of the house and the women who work for her. We’ll get all perspectives under one roof!”

Field work was all about improvisation.

Aditi Patil is a Political Economy Analyst-Illegal Wildlife Trade at Wildlife Conservation Society. She often wonders if she was born into the wrong species.

Ankit Kapoor is an Illustrator and Animator who graduated from Srishti School of Art, Design and Technology and currently freelances out of Delhi/ Chandigarh.