MIND THE MOOSE: Tales of Conflict from the Land of the Midnight Sun 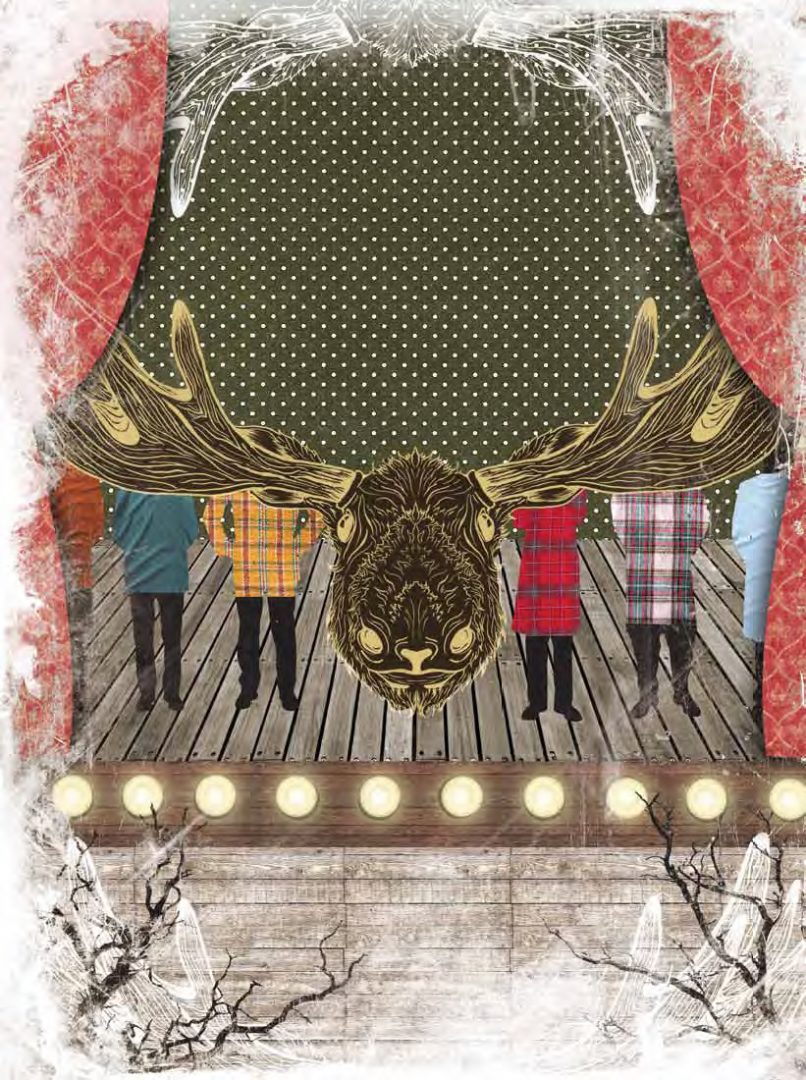 A hundred years ago, humans almost exterminated all large mammals in Norway. Government protection has since ensured the overwhelming return of species, only to result in a newer problem: CONFLICT.

Norway lies over 7,000 km to the north and west of India. There can be few greater contrasts than flying from Norway where we are sitting and writing to Bangalore for example where the editor of this special issue is looking at the clock wondering when it is going to arrive as the deadline ticks closer! Currently, there is a meter of snow outside the window and the trees are covered in white. The internet says that Bangalore is now at 28C and sunny.

Flying over Norway presents an impression of a landscape consisting entirely of endless forest and wild rugged mountains—in fact, less than 5% of the land area is given over to agriculture. A brief glance at the vital statistics of Norway will inform any reader that we have one of the world’s highest standards of living, one of the cleanest environments and the lowest population density of Europe (only 15 people per square kilometer, compared to India’s 360!). Surely this is a place where people and wildlife can live together without conflict? Surely there is enough space her for everybody to get along?

If we turn back the clock just 75 or 100 years then Norway was a land almost lacking in large wildlife. The large ungulates (moose, roe deer, red deer, wild reindeer) had been over-hunted to the very edge of local extinction. The large carnivores (brown bears, wolves, Eurasian lynx and wolverines) along with many birds of prey like the golden eagle were likewise pushed to the edge, and in the case of the wolf were actually totally exterminated, in government-sponsored campaigns where all methods were used, including poison. The forest was very heavily harvested and people were scratching out a living in just about every corner of the land. At these latitudes with their low productivity, you need a lot of space to survive—and the few Norwegians had just about filled up their country—with little space for the wildlife that had lived here since the ice age ended.

Writing this in 2011 much has changed. The large ungulates are certainly back—with combined numbers of close to a million individuals. One or two species are found just about everywhere in Norway. The birds of prey have made a dramatic recovery and even the large carnivores have rebounded. Lynx and wolverine can be found across much of the country, bears are making a return on several fronts, and even wolves have returned, recolonising from Finland. The reason for the recovery of this wildlife is largely through improved legislation. The bounties and extermination campaigns have passed into the history books, poison and harmful pesticides were banned, and hunting is regulated with tight enforcement of quotas.

While many are happy with this dramatic recovery of wildlife, many are not! Norway suffers under many conflicts, just like virtually everywhere else, and several of these are increasing. Just like in India, the range of conflicts between wildlife and humans is wide and complex.

Let’s start with the “simple” ones. According to last year’s statistics 7,300 wild ungulates (4,200 roe deer, 2,200 moose and 700 red deer) were involved in collisions with motor vehicles and trains. Hitting a moose when travelling at 80 kmph is about the same as hitting a cow! Such collisions are associated with a huge economic cost with damage to the vehicles, and frequent injuries and sometimes death for the passengers. In response large amounts of money are spent on fencing highways along particularly exposed stretches and clearing the forest along the roadside to increase visibility. Despite these measures, ungulate

– vehicle collisions can occur just about anywhere at any time

– and are a constant source of risk for anybody travelling. However, most people simply relegate this to part of the background “normal” risk that surrounds us every day and don’t think twice about it.

The wild ungulates are also involved in a range of other conflicts—mainly with forest owners, but also with farmers. Norwegian forests are extensive, covering about 40% of the country, and are managed for timber production. Through a system of clear-cutting and replanting/regeneration, the entire forest is given over to what is one of the world’s most mechanized and intensive forestry systems. From the point of view of timber production at least it may even be sustainable (but if we consider a lot of the forest’s biodiversity a different view would emerge). This forestry system has also benefited the wild ungulates, creating a mosaic of early successional stages with abundant food. However, moose, roe deer and red deer also cause substantial damage to timber production through their browsing and bark stripping of trees. Moose for example will happily use young pine trees as a major source of winter food. Forest owners (and most forest is in private ownership in Norway) therefore regard moose especially as a major source of lost revenue. Farmers are also exposed to a certain degree of crop damage by deer. However, the loss they experience is countered by the fact that hunting rights for wild ungulates are attached to landownership. This means that the landowner experiencing the damage to his trees or crops can offset some of this loss up against the sale of hunting permits or the ability to take part in the culturally important hunting season and shoot a moose to fill his freezer with meat for the winter. In 2009 the hunting bag consisted of 36,000 moose, 37,000 red deer, 31,000 roe deer and 7,300 wild reindeer. Although not perfectly balanced this system has led to an internalization of the costs and benefits that reduces the ungulate—forestry conflict to a discussion about what levels the ungulate populations should be managed at to limit their damage—as no one seriously questions their right to exist in the Norwegian forests.

The same cannot be said for the large carnivores! Their return during the last 20-30 years has created a huge number of challenges for the well-established system of wildlife management which developed around the wild ungulates. The first challenge consists of their depredation on domestic sheep. During decades without large carnivores a system of husbandry evolved where sheep were released into the forests and mountains in spring with only minimal supervision, before being collected again in the autumn. When large carnivores encounter these sheep the result is predictable. Compensation is currently paid for over 30,000 sheep per year. Although there is much uncertainty around the correct numbers because fewer than 5% of those compensated are actually verified, research has confirmed that the compensation payments are largely within the appropriate range. There are many potential mitigation measures that could be used, but all of these require a transition from free-ranging grazing to a more controlled form of husbandry, and so far the industry has shown a very limited will to change, preferring to accept compensation payments and lobby for a reduction in large carnivore numbers.

Another livestock conflict is associated with the domestic reindeer that are herded by an indigenous people, the Sami, throughout central and northern Norway. In most of these areas, their reindeer represent the only wild ungulate prey of appropriate size for lynx and wolverines to prey on. The result is a very high conflict, originating from the many reindeer that are killed, but fueled even further by the challenge of documenting these losses and the resulting difficulty in setting appropriate compensation levels. This conflict also pits competing conventions against each other as the Sami‘s rights are protected by a range of international agreements on the rights of indigenous people and ethnic minorities and the carnivores are protected by many biodiversity agreements. There are few suitable mitigation measures for reindeer, and the most used action is to regulate the size of the carnivore populations.

Lastly, a large conflict has arisen between hunters who fear that large carnivores, especially lynx and wolves, will become competitors for their shared prey—roe deer and moose respectively. The reality of this competition varies greatly from region to region but may be significant. An additional aspect is that wolves often kill their prized hunting dogs.

On top of these conflicts that have a material or economic basis are a whole range of social, cultural and political conflicts. Although issues like economic loss and fear for personal safety are often cited, a large part of the background lies with a fundamental disagreement between rural people and those living in cities, and between rural community leaders and more central authorities, about who should make decisions and about the fundamental right of large carnivores to exist in our modern landscapes. Despite our entire landscape consisting of forest and mountains it is not viewed as a wilderness, rather it is viewed as a culturally developed production landscape that produces timber, grazing and hunting opportunities. Many segments of the rural communities are simply not able to imagine a place for large carnivores in these landscapes.

To those familiar with India’s efforts to conserve tigers, leopards, and elephants in their crowded landscapes it may seem ridiculous that Norwegians claim that “there is not enough room” for a few wolves or lynx in their landscape—but the situation is very serious. Our parliament regularly discusses large carnivore management and in the face of the existing conflicts they have imposed severe constraints on the acceptable number of large carnivores that are allowed to live in Norway. Anything above these limits is shot – and these goals are just a fraction of what the habitat could potentially carry. The power of the rural hunting and agricultural lobbies has so far succeeded in winning over the opinion of the majority of the public who support large carnivore conservation.

The one experience that shocked most was a few days ago when, in the middle of a discussion with our Indian partners about conflicts with leopards, tigers and elephants where people regularly are killed, we were asked if we could get involved in a local discussion here in the city of Trondheim about a conflict between roe deer and some sub-urban dwellers. The issue, which was presented as a “major” human-wildlife conflict, was that roe deer were nibbling some of the flowers that people were planting in their gardens in summer—and they were demanding that the animals be shot.

This underlines the bottom line in human-wildlife conflicts. Although there is a fundamental core to the conflicts which is related to economic and material issues, the most important factors lie with the way that we perceive these conflicts, which in turn relate to the way we perceive our own place as humans in the wider world of nature. When comparing the Norwegian and Indian situations there is a startling difference. Norway has plenty of habitat, a very well established wildlife management system that can manage wildlife in a range of human-dominated landscapes, and an enormous platform of both research and experience based knowledge to draw on. What is often lacking is a willingness to tolerate wildness and to make personal sacrifices to allow nature some space to live alongside us. In India we see many problems with a legislative and management system that is more designed for a protected area approach than for being operational in human-dominated landscapes, and in general a lack of supporting research from these landscapes. But what India does show is an incredible tolerance for wildlife, even when it causes conflicts that go far beyond the level of being an “inconvenience”. We clearly have a lot to learn from each other!

John Linnell is a senior researcher at the Norwegian Institute for Nature Research in Trondheim, Norway. John.Linnell@nina.no