Monitoring Tigers in the Sundarbans

Tracking changes in wild tiger numbers is essential for evaluating the impact of conservation strategies and for identifying emerging threats. Unfortunately, tigers are notoriously elusive, particularly so in the Sundarbans of Bangladesh and India; a globally important tiger landscape and the largest mangrove forest in the world. The Sundarbans is made up of a maze of thickly vegetated islands interspersed with tidal waterways that presents a unique set of challenges for counting tigers. Camera trapping has been used in other areas to estimate tiger abundance, but such efforts in the Sundarbans have been hampered by the lack of recognizable tiger travel routes, without which capture rate is too low to make sound conclusions. However, tigers crossing creeks in the Sundarbans leave distinct tracks on the muddy banks which can be used to infer relative abundance with a suitable sampling strategy and reasonable set of assumptions. Furthermore, the fact that the track sets are made in a uniform medium and are degraded by the same tidal process, effectively limits the potential effects of variation in detectability across the study area. 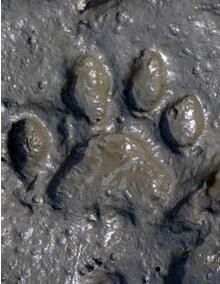 To get an index of tiger abundance, we designed a survey that recorded the number of tiger track sets/km of creek surveyed for each of 65 sample units covering the 6,000 km2 of the Bangladesh Sundarbans. Over two months of field work, three teams surveyed 1,201 km of khals, recording 1,338 tiger track sets. Tiger tracks sets were noticeably sparser in the north-east, where the forest borders village areas, compared to the south and west. The next step is to investigate if this apparent disparity in relative tiger abundance across the landscape is related to ecological factors or human activity. If low tiger abundance is a response to human activity, such as prey poaching for example, there may be considerable scope to increase the tiger population in the future through improved management of the problem areas. Work is underway to estimate prey numbers and human use across the area to provide further insight into the potential causes of variation in tiger abundance.

We calculated that we could detect approximately 20% or more future change in the tiger population if we repeated the same survey every two years. This fits with the current management protocol that will consider management intervention (such as additional forest patrolling) if the tiger population drops by 30% or more over two years. The survey does not differentiate between changes from natural processes and anthropogenic pressures, but reacting to substantial declines is a sound precautionary approach to ensure continued population persistence.

The first survey was carried out in early 2007 and at the time of writing the 2009 survey was underway. Since the last survey, the Bangladesh Sundarbans was hit by cyclone Sidr, which damaged vegetation cover in the east and killed thousands of local villagers living next to the forest. The cyclone could likewise have negatively impacted prey and tiger numbers in that area. Cyclones are a regular occurrence along the Bay of Bengal coastline and, although not frequently as devastating as Sidr, must be considered as a contributing factor to tiger and prey levels. 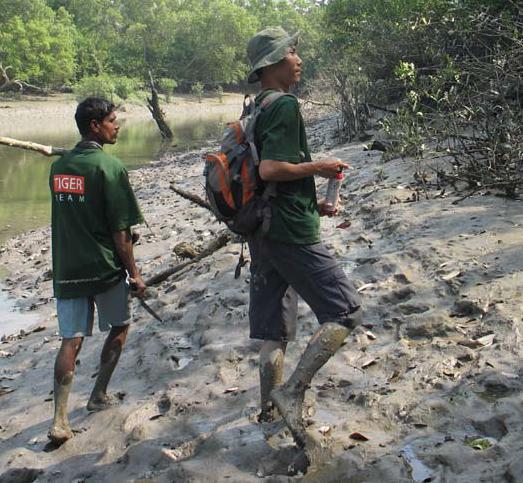 The track survey will be a key component of a monitoring programme being developed to measure success in tiger conservation in the Bangladesh Sundarbans. This is part of an overall conservation programme for Bangladesh, being developed in line with a recently finalised Bangladesh Tiger Action Plan developed by the Forest Department (FD) . The next challenge is to integrate the survey into the FD forest management protocol and plan activities to mitigate potential future declines. We are also in talks with the Wildlife Institute of India to discuss opportunities for developing a transboundary monitoring and conservation approach for both sides of the Sundarbans.

Monitoring changes in tiger populations individuals left in the wild), there across tiger conservation landscapes are few tiger areas that track change is essential for understanding threats in tiger populations on a landscape and focusing management response. level, whether it be in terms of relative However, with the dire predicament of abundance or absolute numbers. The tiger conservation worldwide (<4000 Russian Far East (whose monitoring approach influenced our study in Bangladesh) and some sites in India, are the only other areas where tiger population change is measured on a landscape scale. If changes in other tiger populations are not monitored closely, then wildlife managers will not be able to detect or react to declines in time to save the population in question.

However, although important, monitoring should not overshadow the need for improved protection for tiger forests. Working out how to measure tiger populations takes time, and if we do not act now to combat the multitude of threats they face, then we run the risk of loosing tigers faster than we can count them.

Adam Barlow (adam.barlow@zsl.org) is project manager for the Zoological Society of London and Wildlife Trust of Bangladesh’s Bangladesh Tiger Programme.