The remote and poorly accessible Kedarnath, Badarinath and other ancient shrines located high up in the Garhwal Himalaya are some of Hinduism’s holiest pilgrimage sites. Religious tourism offers some employment opportunities for people living in the region – as porters, horsemen, and workers in the small restaurants and hotels that spring up seasonally to accommodate a large number of pilgrims. The climbers and tourists who visit the region for its spectacular panoramic views of the peaks such as Kamet, Chaukhamba, Bandar Poonch and Nanda Devi have also been a source of income for the local people in the Garhwal and Kumaon regions. Gyan Singh belonged to Ransi, a small village in the Rudraprayag District of Garhwal. He was a shepherd most of his life and had, as a result, an in-depth knowledge of the valleys and wildlife in the region. Although his patch of land and livestock provided him with a source of livelihood, he supplemented his income as a porter based at Gaurikund, the hamlet at the beginning of the Kedarnath trail. During summer, when the trail to the temple was snow-free, the large numbers of devotees visiting the shrine were willing to pay considerable amounts of money to men who carried them or their luggage. Wooden palanquins borne by porters are still a popular mode of transport for pilgrims unable to trek in the tough mountain terrain. 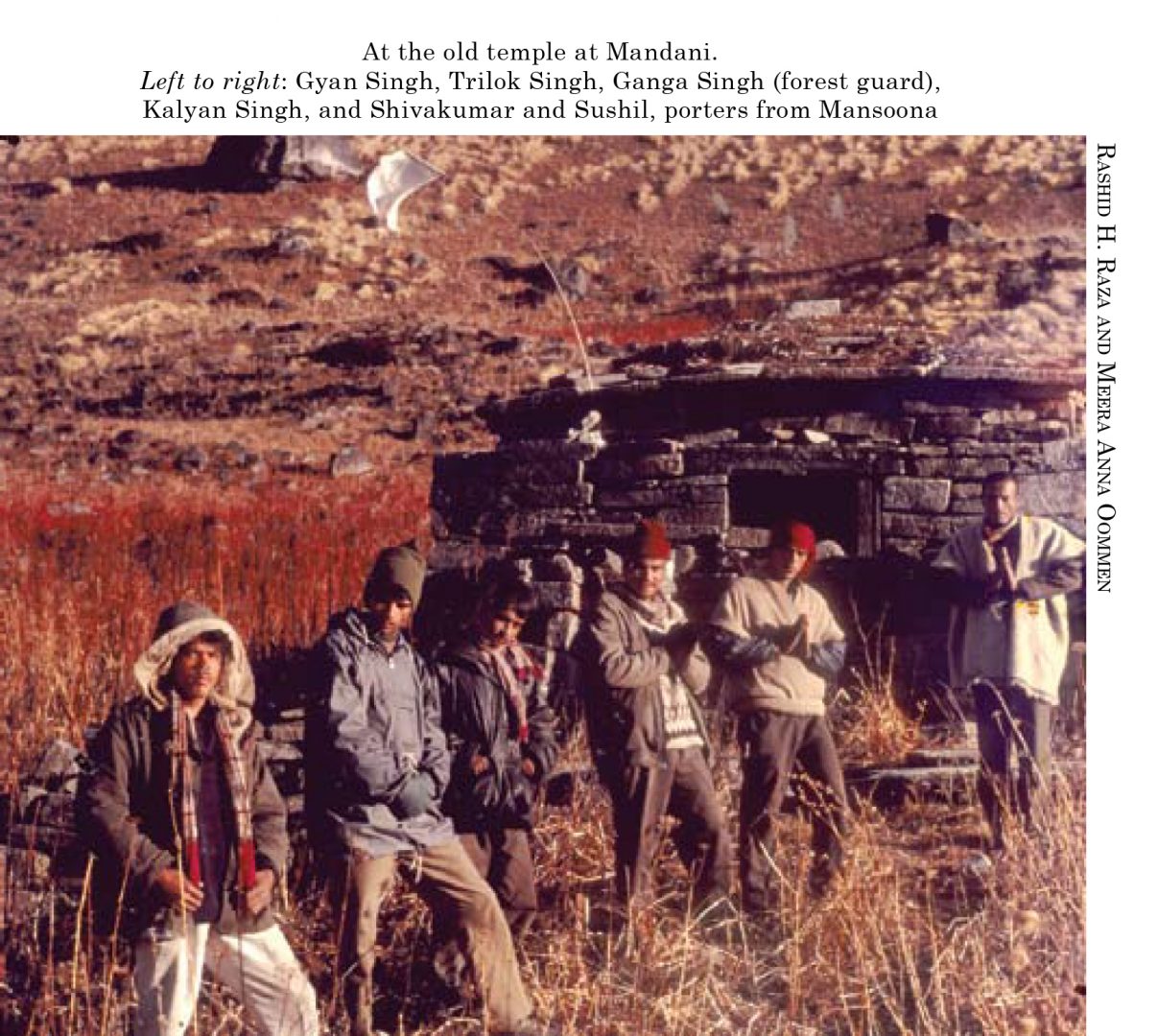 Our association with Gyan Singh started in 1996 when we began our field surveys with the Wildlife Institute of India in Kedarnath Musk Deer Sanctuary. Our project aimed to identify potential areas for conserving biological diversity in the Western Himalaya and the trans-Himalaya. Kedarnath, on account of its wide variety of habitat types, remoteness and large elevational extent was an ideal site for detailed explorations on species diversity patterns which formed the focus of the study. After one of our initial surveys to the area surrounding the Madhyamaheshwar temple, we camped at the inspection bungalow at Akhtauli near Ransi. Although there were a number of porters who were familiar with the temple trails, our search for men who knew the surrounding wildlife sanctuary and who were willing to risk a trek out to the higher valleys in late autumn and unpredictable weather had few takes from villages near the road ahead. Finally, with the help of a forest guard (Ganga Singh) and field assistant Kalyan Singh Bisht (an article about his brother Vikram Singh Bisht by Suresh Kumar, appears in this issue) we were introduced to Gyan Singh and Trilok Singh from Ransi. This team guided us in our surveys through the valleys of Dhauli, Mandani and Kham. Thus began a close association which lasted over five years.

In spite of his taciturn nature and a curious disability (a part of one foot was chewed off during a tussle with a Himalayan black bear which raided his shed, and the other was affected by filariasis), Gyan Singh became the backbone of all field surveys. Stoic and unflappable, his knowledge of trails, campsites, and odeyars (large rock overhangs where one could take shelter or tents could be pitched) was phenomenal as was his adeptness at spotting wildlife, predicting the weather and finding running water when everything around was frozen or dry. However, what truly set him apart from the younger men was his uncanny ability to casually chart out courses where no paths existed and in places where he had never been before.

He also knew most of the shepherds who camped in the region, and this often helped us in establishing better associations with them. 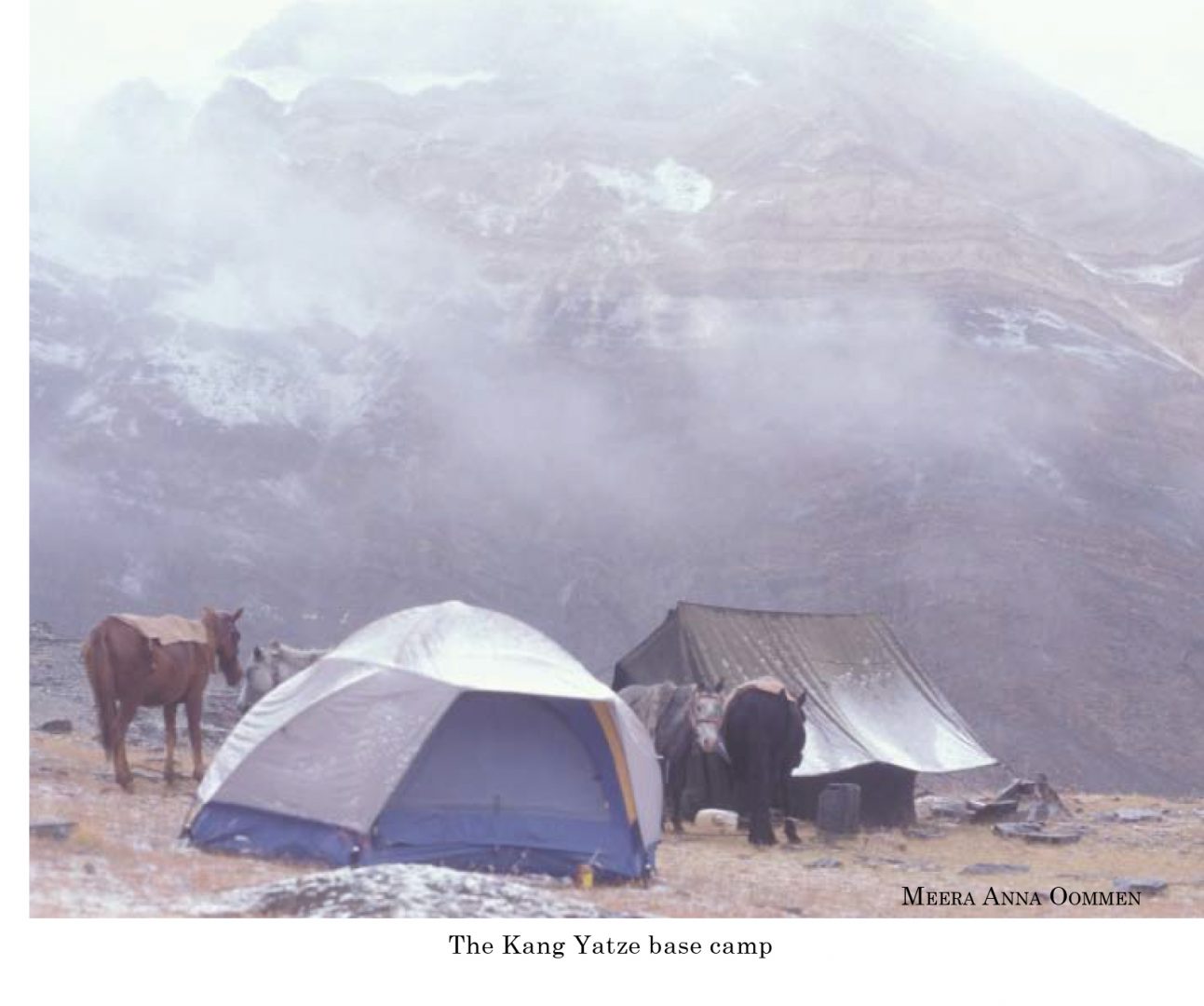 What he did not like was the drudgery and monotony of laying vegetation plots and during the time we spent counting plants, he would make himself useful by looking for indirect evidence of wildlife within the plots or collecting edible ferns. While sampling in the alpine meadows he was particularly prone to abandon work and disappear looking for chaura (Angelica sp.) which is a prized flavouring agent. This shortcoming we were willing to forgive since the dinner he prepared would be sumptuous. At the same time, his long years as a shepherd meant that his knowledge of the vernacular names and local uses of plants was considerable and on several occasions, he was responsible for resolving issues related to species identification. His self-confessed fondness for wild meat (he curbed his appetites during this period) was also instrumental in our sightings of the endangered chir pheasant (Catreus wallichi) as well as in various wildlife sightings ranging from leopards and musk deer to lammergeiers and numerous rare birds. To make up for his own illiteracy and lack of enthusiasm for data collection, he introduced us to two young men from his village – Umed Singh and Birender Singh. These two quick learners, along with Kalyan Singh, helped us establish and maintain over five hundred vegetation and bird plots and numerous quadrats along the considerable sampling gradient which ranged from over 1200 metres in the subtropical zone to alpine meadows and scrub which occurred above 4000 metres. Since bird diversity was to be sampled during different seasons, this meant marking and maintaining the plots at regular intervals to enable revisits.

While the field surveys involved walking from dawn to dusk on most days and the sampling entailed very hard work in the plots on a similar schedule, the added responsibility of cooking, carrying provisions, shifting and establishing camp frequently meant that on most days there was hardly a break for the men. Additional responsibilities included striking bargains for old sheep with neighbouring shepherds when provisions ran low, returning runaway Bhutia dogs (Tibetan mastiffs accompanying local shepherds) to their rightful owners, building makeshift bridges across torrential streams and rescuing researchers who fell in (we later found that the undisturbed slopes that we were seeking for sampling remained undisturbed for a reason) and nursing others from periodic bouts of high altitude sickness and giardiasis. On the odd occasion when sampling was concluded early or we had an off day at the base camp, cricket was the preferred form of sport and entertainment. The team also included our driver Jagdish who was good at the game and took it upon himself to train the rest. However, all this was contingent on the availability of level ground and often we resorted to idleness which was most enjoyable. While the younger men were quick to pick up the game, Gyan Singh struggled to keep up and found it difficult to bowl even once without falling down at the end of his run-up. However, his ability to keep wickets and his late-blooming batting skills earned him some points and he was christened Ian Healy (after the Queensland cricketer) by Jagdish and some of the children from nearby cattle camps.

For a team of individuals who started work unaccustomed to data collection or long spells away from their families, they showed remarkable commitment and enthusiasm and it was soon clear that they were motivated by much more than the modest salaries they received. In fact, most of these men could get by without regular employment as they owned land and livestock. By the end of the project period, Umed Singh could correctly identify most woody plant species in the study area by both local as well as Latin names, while Birender could visually estimate the girths of trees to the nearest 10 cm or so. As the project neared completion, we explored options to establish a long-term monitoring research programme that would also provide a source of employment to the team, but the costs were prohibitive and as students our options to raise money were limited. Umed Singh went on to work on a similar project with Rashid Raza in Askot Wildlife Sanctuary while Gyan Singh and Birender Singh stayed back in their village at Ransi. Kalyan Singh, who was the youngest member of the team married a girl from a village near Ransi and fulfilled his long-held dream of starting a provision shop in Ghat, his remote and inaccessible village in Chamoli District.

To conclude, we share the same sentiment as the other contributors to this special section. While most of us have been happy to acknowledge the contributions of individuals and certain communities, we feel it is time to develop formal institutional norms for developing long-term partnerships that benefit both researchers and field assistants. In addition to basic commitments such as steady incomes and insurance, it is also important to provide recognition on institutional websites and conservation related publications. Field assistants and informers also play a critical role as vital links between their own communities and researchers, often creating opportunities for furthering mutually beneficial partnerships.

Meera Anna Oommen (along with Rashid H. Raza) worked with the Wildlife Institute of India on a project that aimed to identify potential areas for conservation of biodiversity in the Indian Himalaya. The field surveys for this project were conducted in the Ladakh region of Jammu and Kashmir and the Garhwal Himalaya in Uttaranchal. Gyan Singh, Umed Singh, Birender Singh and Kalyan Singh were members of the team in Kedarnath Musk Deer Sanctuary in Uttaranchal where extensive field studies were conducted. 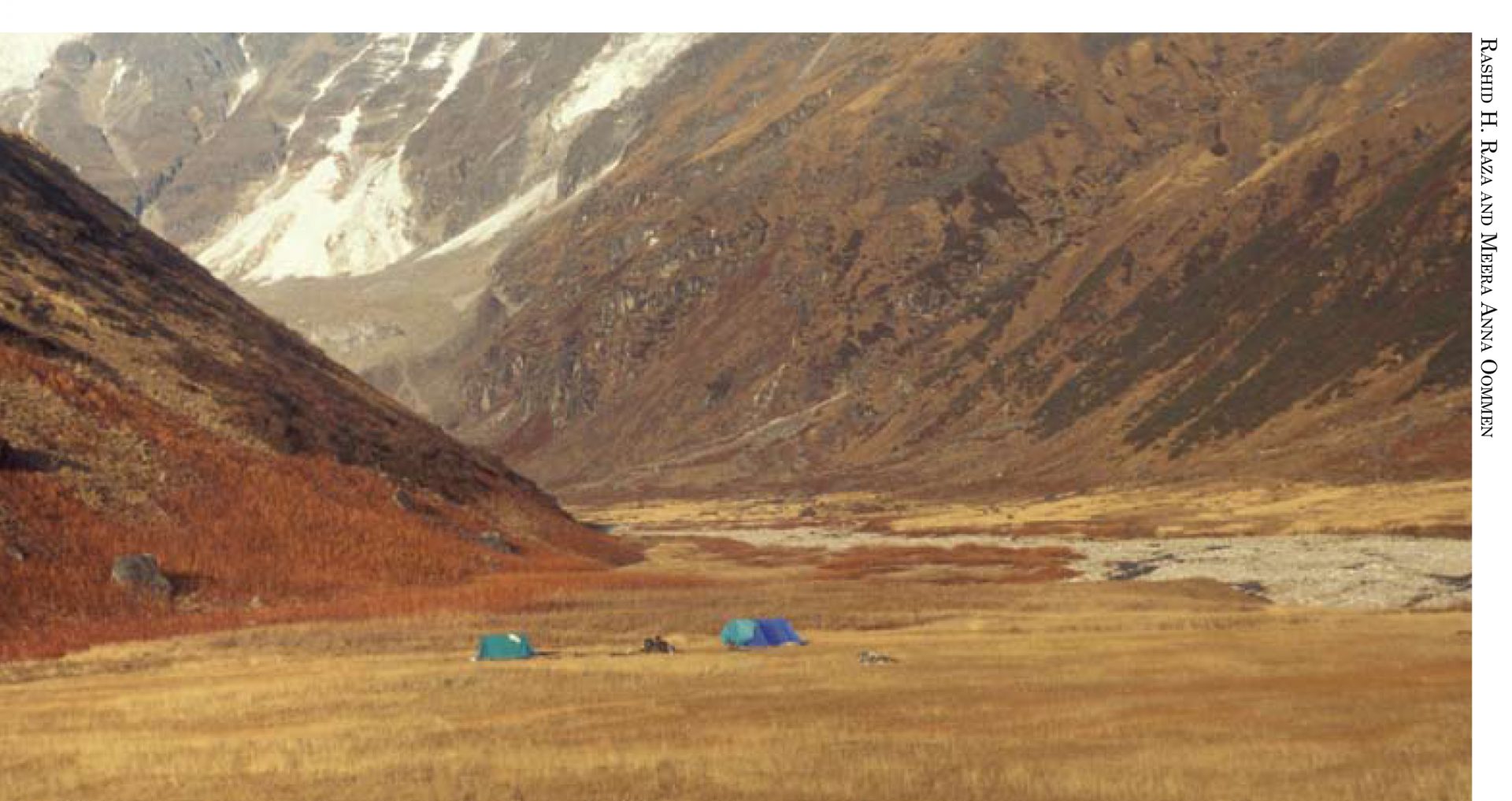