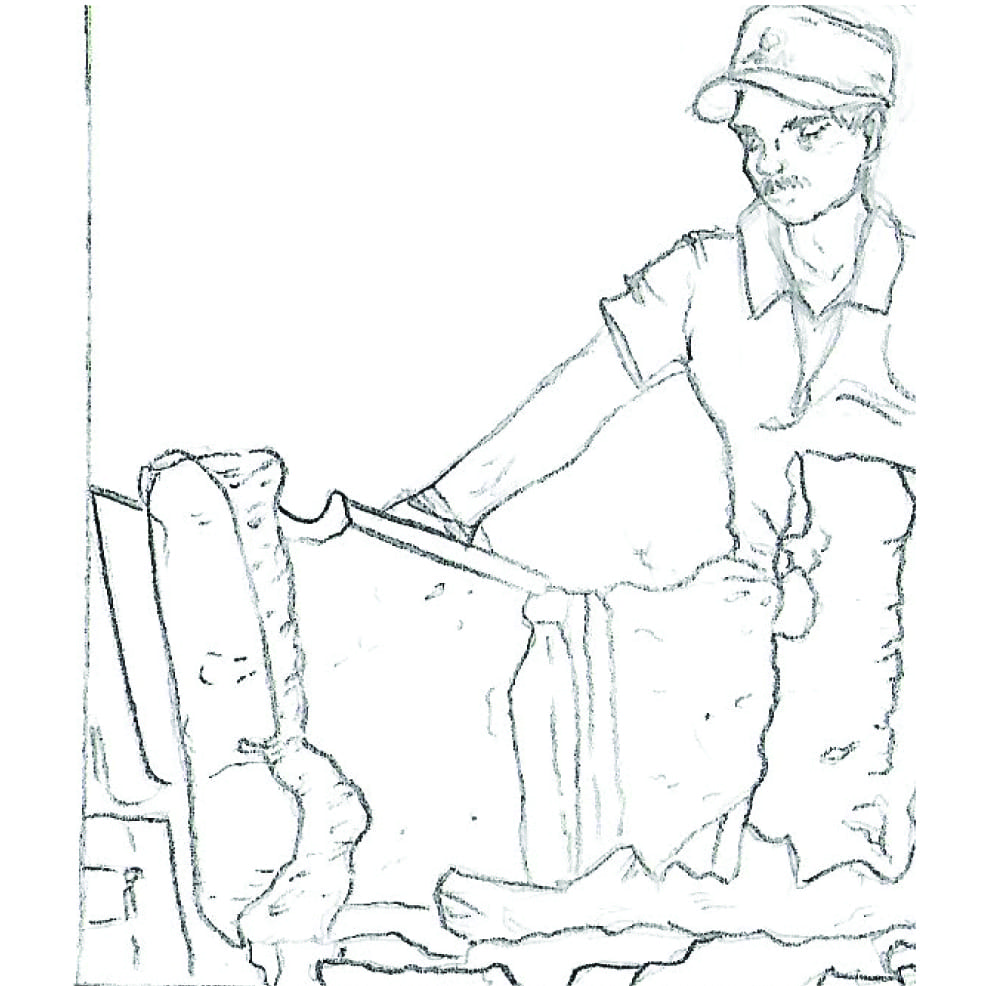 Since liberalization in the 1990s, India’s rapidly growing economy is seeing significant increases in production and consumption. This quick shift, combined with India’s widespread lack of waste and sanitation infrastructure, has led to unprecedented challenges in waste management. People are consuming packaged foods, bottled water and drinks, and digital technology in larger numbers than before. Some of this waste is recycled and proves to be an important livelihood source for several communities. Some of it decays within communities. In response to changes in the waste stream, solid waste management systems (SWM) are evolving to better match the national environmental policy and SWM rules put forth in 2016. These rules provide guidelines for separating and disposing of waste in environmentally responsible ways, but SWM varies greatly across different contexts. Change in the Nilgiris’ SWM system is slow and imperfect, creating negative health consequences for workers, residents and their environments, and exacerbating existing inequalities in the Nilgiris.

Our project focused on the SWM system in practice in selected villages in the Hubbuthalai Panchayat and in the small city of Coonoor, in the Nilgiris District. We followed the movement of waste from Point A where it is discarded to Point B where it decomposes or is turned into something new. We sought to understand the waste system and to understand the gaps in the waste management system, and why they exist. We built on preliminary work completed in 2015 and 2016 by student groups at the Nilgiris Field Learning Center (NFLC). This area is urbanizing rapidly and is populated by Sri Lankan repatriates, a thriving group of Badagas, small populations of Tamil speaking Adivasi, Scheduled Caste (SC) and other Hindu communities, as well as Muslims and a small number of people from North India. SWM and recycling in the Nilgiris serve as a case study for understanding the role inequality plays in the health and livelihoods of people who have to make decisions about waste. 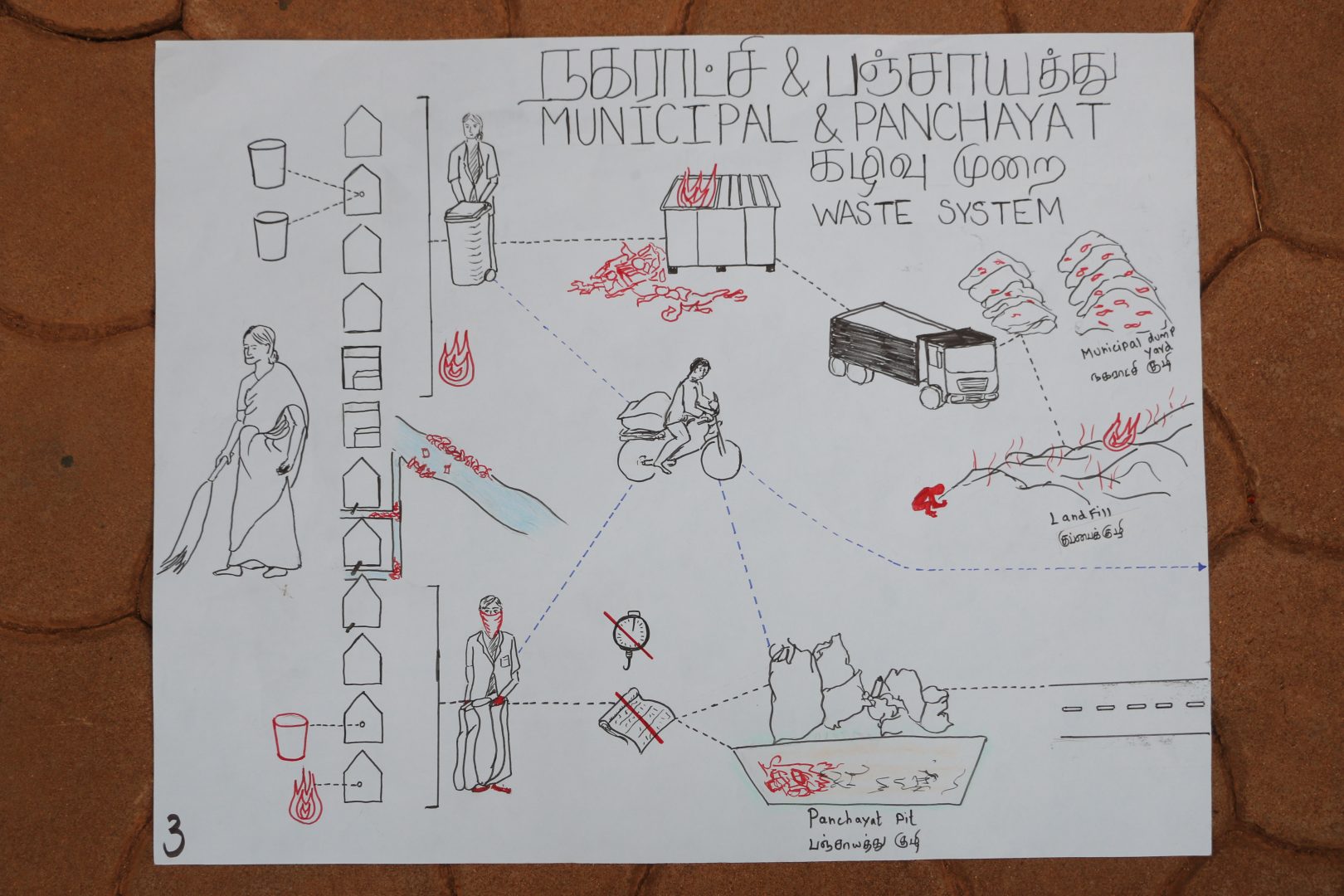 We studied these questions using mixed research methods. We conducted surveys and examined drainage infrastructure inventories in peri-urban Hubbuthalai Panchayat to update inventories first mapped in 2015, as well as to further understand individual residents’ relationships to waste production and their responses to earlier SWM interventions. We also conducted open-ended interviews with all major stakeholders in the waste management system, including sanitation workers. We then surveyed recycling shops in the Coonoor Area, and connected re-processers—who break down recyclable materials for manufacturing—in bigger cities. Lastly, we mapped and documented types and comparative amounts of untreated sewage and solid waste dumped in the Coonoor River within the city boundaries. 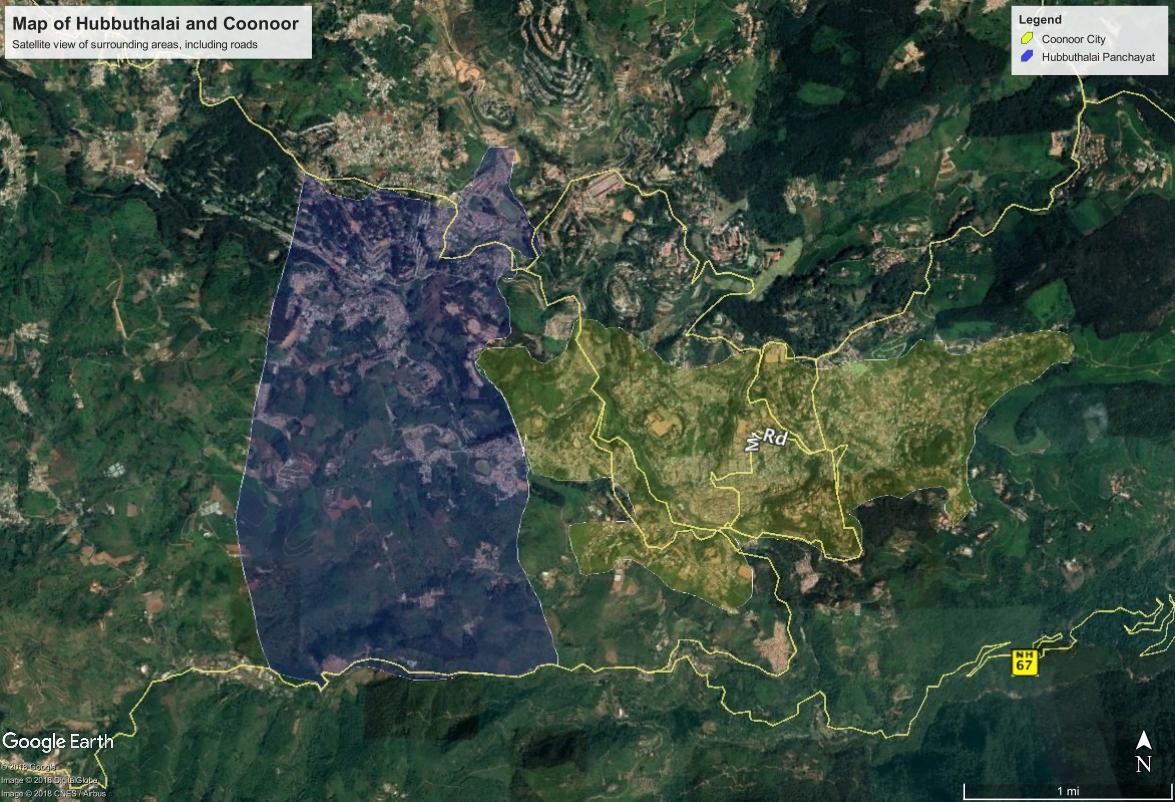 Consequences of SWM in the Nilgiris

At our case sites waste comes from a range of places: households, markets, factories, hospitals, commercial establishments, tourist spots, and other institutions—all of which the local government recognizes as “waste generators”. The city of Coonoor, bordering Hubbuthalai, has a population of about 45,000 and produces 9-10 tons of waste daily including food waste, plastic wrappers, plastic vessels, papers, cardboard, cotton or plastic bags, packaging, clothes, and small quantities of metal or electronic waste. As residential and commercial establishments expand, they produce more daily waste in increasing amounts. While there are SWM systems in place in the Panchayat and the Municipality, the pristine SWM system described by government officials and wealthy citizens is far from the reality experienced by both densely packed urban and isolated rural residents who live near rivers and wetlands strewn with plastics, food waste, and fecal matter. 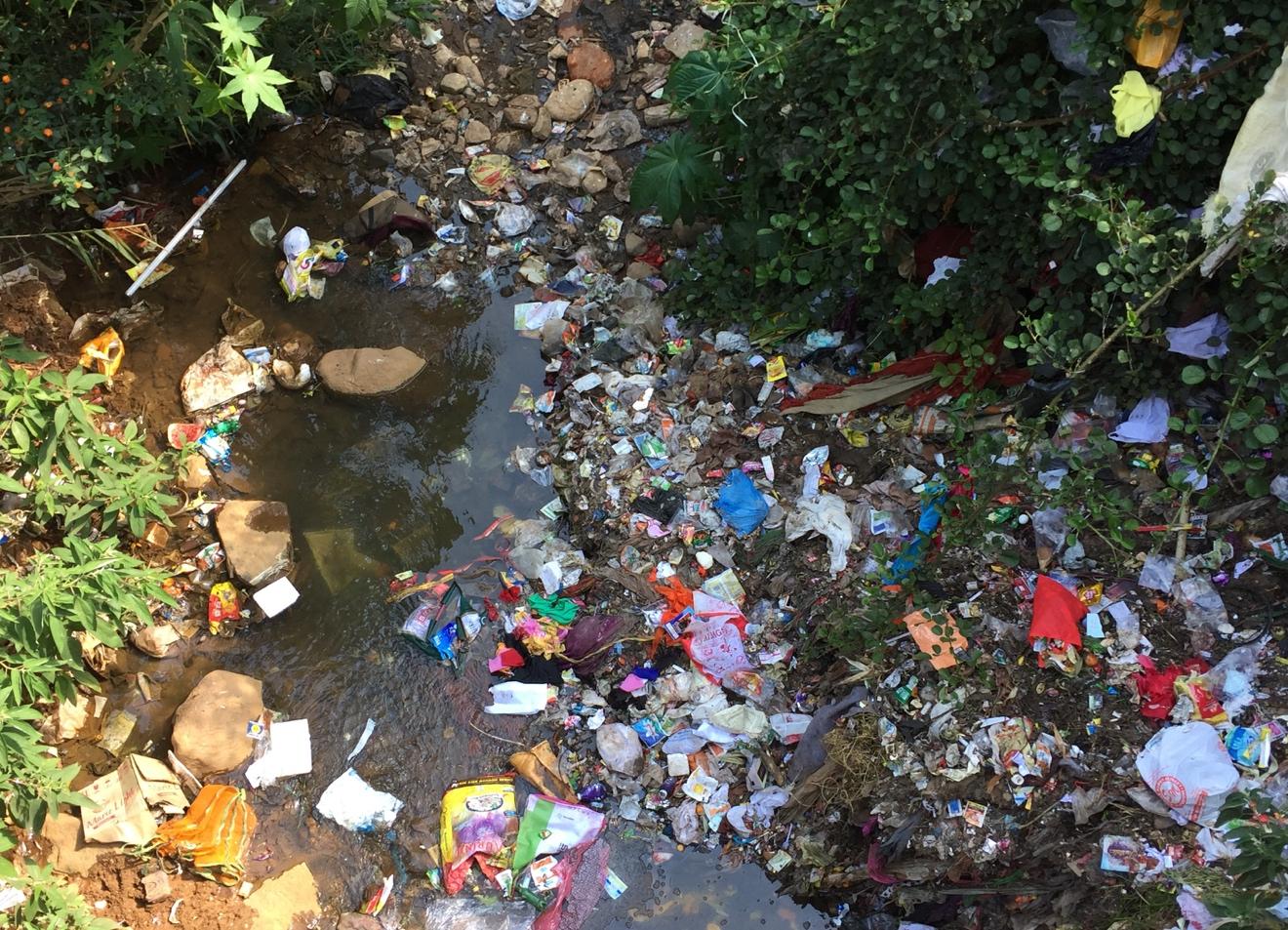 The river and air are contaminated by people burning waste behind their homes, using waste as fuel for cooking, or simply dumping waste in the drains next to their houses, on roadsides, and in water bodies. Unofficially dumped waste does not get picked up. Waste brought to a common government designated dumpsite is burned or eventually deposited in an unofficial dump site. Panchayat instructions shared with us by officials indicate that waste should be handed off to collectors—women who are employed with the task of managing waste.

The Panchayat employs Thoimai Mai Kavalars, or Neat Keepers, for 100 days each year under the National Rural Employment Guarantee Act (NREGA). The job requires that Thoi Mai Kavlars collect waste from at least 10 houses each day. A Thoi Mai Kavlar will start her day between 7 and 8:30 AM. Although she receives gloves, a facemask, and a smock, facemasks are not worn and gloves tear so easily that they are rarely used. A Thoi Mai Kavlar is supposed to collect waste that has already been segregated, but usually, she will spend time sorting the buckets of mixed waste discarded by households. After getting a significant quantity of waste, she will carry or drag the four sacks back to the Panchayat pits, which were often situated in a wetland or near a stream in our case villages. NREGA is meant to address rural underemployment and provide jobs, but the actual practices of collection and segregation are riddled with problems, including work safety issues, and the daily wages of INR 205/day have been inconsistently paid-out since demonetization in 2016. 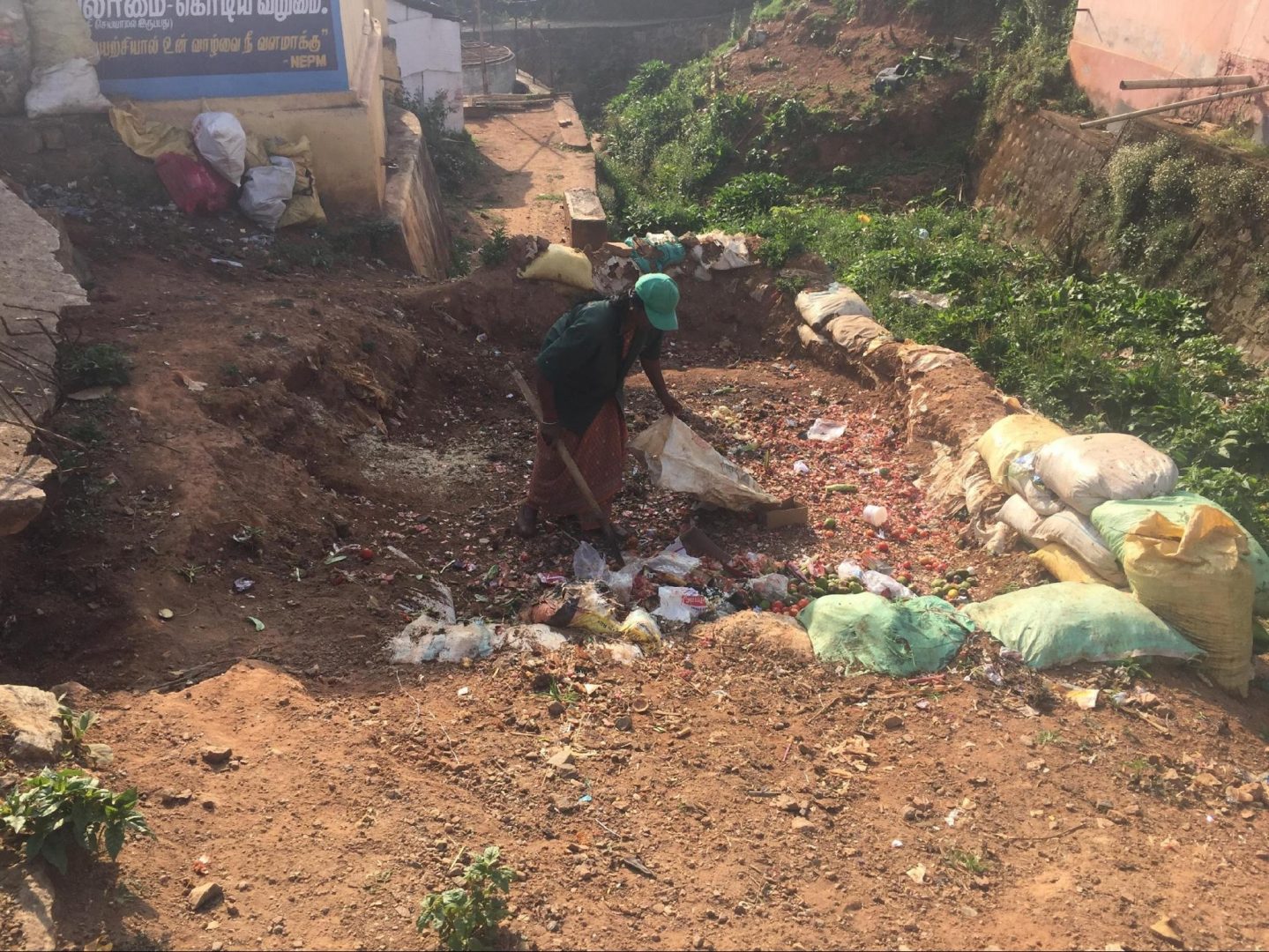 The Coonoor Municipality SWM system is supposed to operate in pathway similar to that of the Panchayat. But here, the SWM system is a public-private partnership. Half the wards use private contractors, employing fewer sanitary workers than the publicly managed areas, even though these wards include the main city centers and a larger workload. Eventually, the Municipality plans to outsource collection completely. Coonoor’s sanitary workers collect waste from households and bring it to municipality-owned bins. The city’s sanitary workers do not segregate the waste they collect and many households bring mixed waste to the bins independently. Unrecognized households and industries also produce waste that is not counted in the official 9-10 tons/day. The waste workers (employed by the private contractors and the municipality), are all women who are poorer residents and/or belong to Scheduled Castes (SC), spoke about being exposed to illness from the waste. Waste workers’ employment is precarious—it is partially regulated, but they do not receive health and sanitation protections or proper compensation.

At the next stage, waste is either decomposed or reprocessed. In the Panchayat, organic waste in the pits is covered with cow dung and wood ash to become manure and later sold. The city uses lorries to bring waste from the bins to a two-acre compost yard, where the organic waste decomposes. Inorganic waste, that often combusts, goes to an open landfill at the top of a hill outside of the city’s boundaries. The city has outsourced the decomposition process, too. Officially, Hubbuthalai Panchayat sends its plastic to other panchayats in the Nilgiris, to mix into tar that is used for road-building. But, unofficially, all the waste collectors bring recyclable waste for sale to the recycling shops in the Coonoor Market and keep the sale proceeds. These shops also send people out into villages and neighborhoods on a regular basis to buy recyclables. The differences between the waste management in the city and the rural areas are summarized below.

Livelihoods from Waste: The Recycling Network in Tamil Nadu

Recyclable materials from the Nilgiris are aggregated and sent around and out of the region—as part of a complex network. Waste generators sort out those materials that can be sold, including old vessels, newspapers, cardboard boxes, leather, old clothes, sacks, tins, and plastics. Collectors, usually men, will purchase recyclable materials from the households and Panchayats, or collect them from roadsides. Additionally, formal sanitary workers usually hold recyclable waste aside to supplement their income. Then, recycling collectors transport materials to the recycling shops in the Coonoor Market Place or in Ottupattarai. At this stage prices are generally quite low.

Once these shops collect between 1 and 5 tonnes, they will rent a large lorry to bring the materials—separated by type and materials (plastics, metals, paper, etc.) —to the next stage of aggregation. Most of the aggregators at this stage are located in Mettupalayam, a town of about 65,000 about 30 kilometers away from Coonoor in the foothills of the Western Ghats.  Many of the men who own these shops and the workers who do the sorting are “Shets” (a term used for both local Muslims and for outsiders from North India). Despite the sharp pieces of metals, the broken bottles and the strong summer heat, few are concerned with safety during the sorting and aggregating process in open yards.

Both specialist and generalist aggregators sell their items based on type and quality. Loads of plastics, papers or metals move to the next stage of bottle companies, paper mills, foundries or material shredders in various cities within the Tamil Nadu state and travel across state borders in separate trucks. The usage of heavy machinery at this stage of reprocessing in units is high, compared to lower aggregators in the recycling chain.  However, we observed a similar lack of regard to safety both by workers and employers.

Recycling networks thus link small towns in the Nilgiris District to larger towns and cities across the state. Recycling is completely in the private arena. It is a cash economy largely operating in the informal sector, where regulation is slight. Despite this extensive and widespread network, policy makers in the Nilgiris are trying to address recycling issues with incomplete solutions. The Coonoor Municipality wants to purchase its own plastic melting machine because plastics pollute the river so heavily. But little thought seems to be given to the scale of plastic collection necessary to drive the process, the infrastructure requirements for effective waste processing, or the negative impacts this policy will have on the poorer, excluded populations of waste collectors or further along the network of Muslim and Shet recycling workers and owners.

The pathway of waste to the pit, the landfill, or the re-processor holds significant consequences for the people who work with waste and live nearby. In this study, we hoped to understand these consequences on people and the environment better, and set the stage for stronger SWM in the Nilgiris. The practical implications of our work are several and include needed improvements in precarious labor conditions of waste workers, the necessity for policy to consider unofficial dumping of waste, waste burning practices and the impacts of waste contamination on water streams that are fundamental for thriving forests and wildlife in the Nilgiris.  Our work demonstrates that the problem of ecological conservations is tied closely to the provision of effective basic services such as solid waste management.

We would like to thank our mentors Neema Kudva, T. Balachander, Gokul Halan and the faculty and staff of the Nilgiris Field Learning Center, the Keystone Foundation, and our translator for enriching our experiences and making our research possible.

Gowtham lives in the Sigur plateau, Nilgiri Biosphere Reserve. He is a graduate of the NFLC class of 2017 and has a degree in civil engineering. Currently he is employed in the construction sector and works in the city of Coimbatore. Email: kf@keystone-foundation.org