Of lobsters, larvae, trials and tribulations 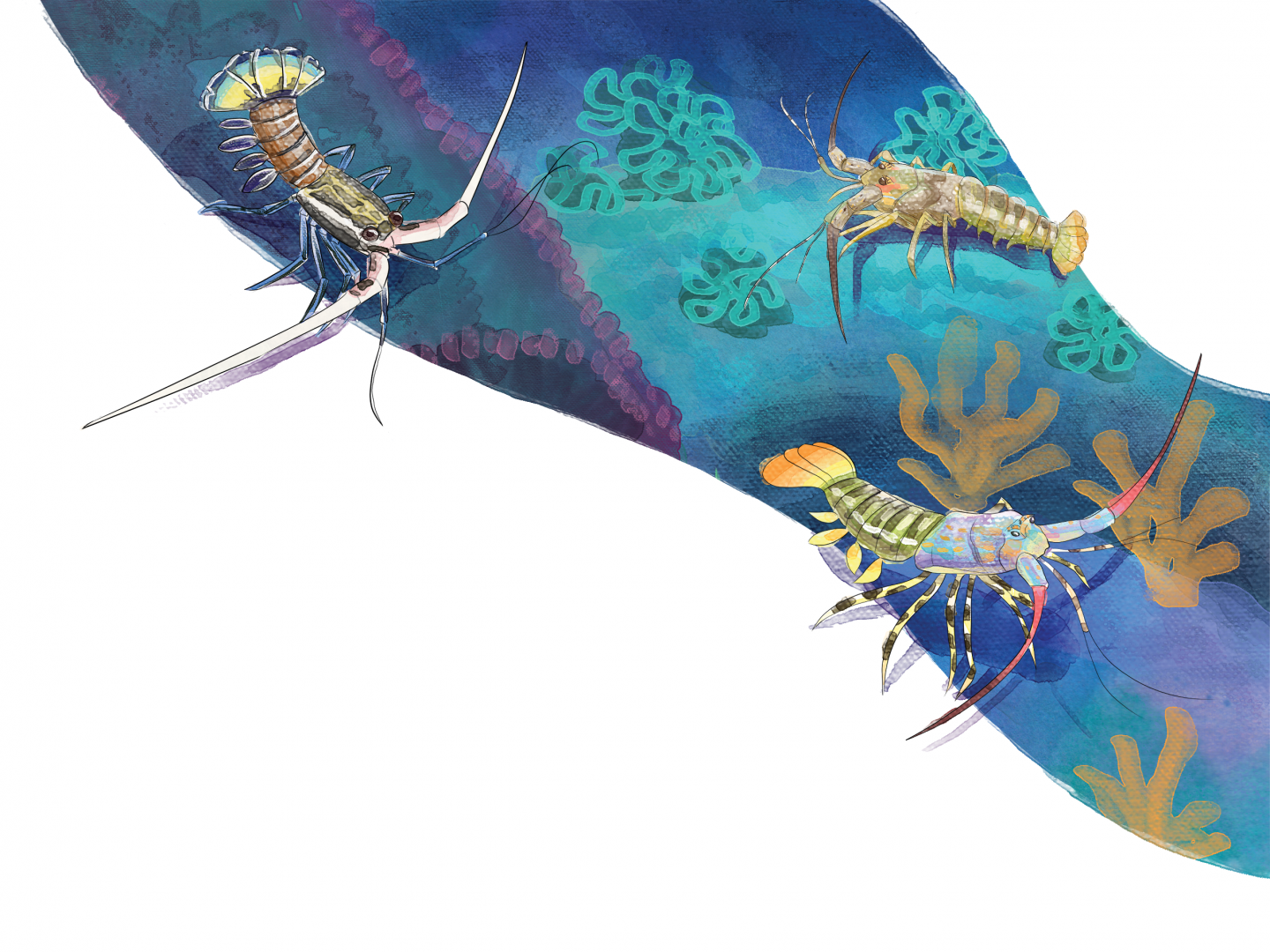 Isn’t it odd how certain creatures elicit delight while others of similar form generate disgust? To me this distinction in feelings is all too real when I compare my reaction to seeing a spiny lobster to that of a cockroach. Both animals are very similar in form and function – long sensory antennae, body consisting of head, thorax and abdomen, numerous hairy legs; both opportunistic omnivores. But the cockroach has scared me off my favourite oceanic islands and the most majestic tallships, while the lobster on the other hand prods my scientific curiosity. I studied the reproductive ecology of American lobsters for my master’s at the University of Maine, USA and my affinity for these crustaceans has followed me to the tropical islands of the Indian Ocean. Tropical spiny lobsters are bizarre but beautiful, with complex life histories and population dynamics that can take many human life times to uncover.

The common names of spiny lobsters like the painted (Panulirus versicolor), ornate (P. ornatus) or scalloped (P. homarus) demonstrate their visual appeal. Tropical shallow-water spiny lobsters are intricately patterned and display a wider range of colors than an artist’s palette. The carapace that protects the cephalothorax and the base of the antennae and feet are all covered in forward pointed spines, making it tricky to capture them unless you have evolved to prey on them or are a trained lobster biologist or fisher. Their exquisite colours are often lost when the lobster is cooked; the heat turns the exoskeleton into a bright red. Thus the beauty is best observed on dives or at fish landing sites and stores. Lobsters have evolved to be creatures of the night and only step out of their holes and crevices after dusk after their visual predators like triggerfish have gone to bed. During the day, the gregarious adults hang in groups of 2 or more, often hiding in coral crevices and under ledges. The juveniles tend to be more solitary occupying small coral holes. But they all sit with their faces pointed outwards, their antennae gently swaying in the tropical waters that are full of smells, sounds and vibrations. The sway of lobster antennae is very similar to the sway of cockroach antennae both of which I have gotten very good at detecting, albeit for different reasons and outcomes.

In the Andaman Islands, where I am currently based, there are at least 6 species of spicy lobster and 1 species of slipper lobster. With exponentially expanding seafood export industries, understanding the ecology of our island lobsters hasbecome more vital  than ever before. Like most benthic marine life – lobsters have a biphasic life cycle: adults remain on the bottom (‘the benthos’), while their larvae travel the seas in search of food and meaning. Pelagic dispersal of benthic marine organisms can be advantageous as it opens up opportunities to find better habitat, increase genetic exchange and avoid benthic predators. Such dispersal can also be beneficial to fisheries by replenishing depleted stocks. Luckily the Andaman Islands have a network of protected areas that include marine parks and tribal reserves but the overlap of protection and species sources and sinks is yet to be determined.

Spiny lobsters take 7-11 years to attain sexual maturity, fertilization is external and fertilized eggs are carried by females for 3-6 months. Hatched spiny lobster larvae undergo a series of moults, drifting in currents for 12 – 15 months, before finding suitable benthic habitats to settle onto. The larvae themselves are very bizarre looking. The early larvae metamorphose into an alien like creature called the phyllosoma – and this name literally translates into ‘leaf body’. The phyllosoma’s cephalothorax is disc shaped and enlarged, kind of  looks like the millennium falcon – gliding through the water column at the mercy of currents and consumers. Phyllosomas can be large – upto 4cm in length – and are often observed hitching rides on jellyfish. These space crafts moult into the final larval stage –   the puerulus that starts resembling the adult. Once the puerulus reaches ‘competency’ i.e. the ability to detect the benthos and an affinity to occupy it, it will ‘settle’ to the bottom. These steps sound simple, biological, but are at the mercy of the wind, currents, pH, temperature, predators and even plankton nets!

Currently we are on month 8 of a yearlong study to profile the near shore plankton of the Andaman Islands. Our plankton net has mercilessly caught two lobster phyllosomas, both on new moon nights but months apart, and we are hoping more might be stored in our unanalysed weekly samples. This study aims to profile daily, lunar and seasonal patterns in meroplankton diversity and abundance. Meroplankton are that part of the zooplankton community that only spend part of their life cycle in the plankton, so these are usually larvae of benthic creatures. So far we have gotten a wide variety of fish, crab, cnidarian, shrimp, polychaete and molluscan larvae and the list continues to grow. In addition to meroplankton we are also studying changes in the dominant holoplankton community: the grazers (copepods), the filter feeders (appendicularians and planktonic snails) and the ambush predators (the arrow  worms). One arrow  worm  was  also caught  in the act of swallowing a fish larvae! While holoplankton can be processed efficiently with digital scanners and silhouette photo identification; the rarer meroplankton require visual searching by trained individuals. The sheer diversity of the tropics and severe knowledge gaps make our work difficult but not impossible. Funded by the Department of Biotechnology, this is part of a larger project at Dakshin Foundation that aims to develop inexpensive ways in which to profile nearshore planktonic communities. While zooplankton are too large, the project is demonstrating the value of inexpensive microscopes called foldscopes in studying phytoplankton communities – wherein techniques can be designed for long-term monitoring of coastal resources by citizen-scientists, local schools or colleges. Our work is opening up a pandoras box worth of answerable questions related to the holy grail of marine sciences – supply-side ecology; some of which can be applied to study the fisheries ecology of Andaman’s high value lobster and grouper seafood industries.

Mahima Jaini is the Marine Research Officer at the Andaman Nicobar Environment Team (ANET). ANET is a research and education center, located in India’s Andaman Is– lands, co-managed by the Madras Crocodile Bank Trust (MCBT) and Dakshin Foundation.

Keya Lall studied design at the Srishti Institute of Art, Design and Technology, but her love for art and illustration has existed far longer. She finds a lot her inspiration from creatures both fantastical and real.