One Last Dance: The Fate of Manipur’s Dancing Deer

Manipur’s dancing deer, the sangai, has one last stronghold – Keibul Lamjao National Park (KLNP), the world’s only floating protected area. But even this floating paradise is at risk. Lauded as the state animal of Manipur, the sangai (Cervus eldi eldi) occupies a mere 15-20 sq. km. of floating marshland known as “phumdi” on the southern edge of Loktak Lake, a naturally occurring wetland and RAMSAR site in this north- eastern state. Phumdi is the most important characteristic of its habitat. This floating vegetation is created by  the amassing of organic debris and biomass with soil, varying from a few centimeters to a few meters in thickness. While most of it is under the water’s surface, it floats delicately, creating a unique floating island ecosystem on Loktak Lake.

The sangai goes by many names; the dancing deer and the brow-antlered deer are two of the most commonly used appellations. The former is derived from its dainty gait that has inspired the movements of the equally graceful Manipuri classical dance style. The latter name is derived from the deer’s unique antlers, with the front protruding beam appearing to come out of the deer’s brow or forehead. Primarily associated with a wetland habitat, this deer feeds twice a day on aquatic plant species, grasses, herbs, and shoots.

Culturally, the sangai is venerated in Manipur. Popular folk legends associate the sangai with the bridge between the human soul and nature. To kill a sangai is to symbolically destroy the delicate binding between humans and nature; thus, this dancing deer is the way that Manipuri tribes express their love for nature. The sangai is also one of the rarest animals in the world and a great source of pride for the people of this state – its name can be found on signages, in restaurant names, in tourism appeals, and in newspapers.

The dancing deer was thought to be  hunted to extinction during the British Raj, but in 1951, it was rediscovered by British tea planter and famous naturalist Edward Pritchard  Gee. His report on the deer, which described in detail its unique antlers and specific habitat, was published in the journal of the Bombay Natural History Society (BNHS) in December 1960. After the Wildlife Protection Act (1972) was passed, M.K. Ranjitsinh, who contributed to the creation of the Act, carried out an aerial survey for the sangai in 1975. His survey found 14 deer in the area now notified as KLNP.

Despite legal protection, KLNP faces many challenges. Phumdis cover 70 percent of Loktak Lake, but only 23 sq. km. of this floating vegetation, found within the national park, is thick enough (at least 1 m thick) to bear the weight of sangai. Additionally, the lake itself faces shallowing waters. Nearly 30 rivers feed into Loktak Lake, and the sediment inflow is high year-round. The only outflow from the lake is at the Ithai Barrage, which releases water but not sediment, contributing to various ecological crises in this wetland ecosystem. The barrage was constructed with the aim of running hydropower projects in the southern end of Loktak Lake. After its construction, the water level was maintained at a consistent 769.12 m above sea level, creating stress in the lake due to conditions of permanent flooding. 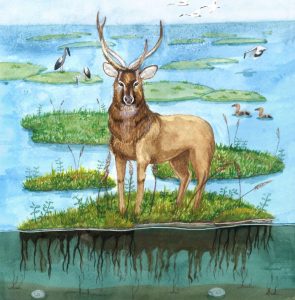 Moreover, the barrage prevents fish species from swimming upstream during the spawning season. Another major impact is the prevention of the natural removal of old phumdis, which once flowed out of the lake into the Manipur River but are now stopped by the barrage. Water pollution also contributes to the degradation of the lake ecosystem. The influx of detergents, agricultural fertilizers, and wastes from the inflowing rivers has created various algal blooms that deplete the oxygen levels in the water and reduce the biodiversity of the lake. Human activities including fish farming, fishing, agriculture, and poaching have added to the stresses upon the lake. The presence of the invasive plant species water hyacinth (Eichhornia crassipes) has increased the biomass on the lake surface, contributing to localized eutrophication. Without careful environmental management and community support, Loktak Lake is expected to become a dead zone.

If the sangai’s habitat faces such diverse onslaughts, what protection can Manipur offer its state animal?  The sangai is wholly dependent upon the preservation of KLNP. As the quality of Loktak Lake and the national park continue to decline, the survival of the sangai in this isolated pocket of the world becomes more doubtful. Add to that the loss of genetic variety, inbreeding depression, and disease outbreaks, and the sangai’s last dance seems to be rapidly approaching.

While the deer’s population has increased slightly over the past decade due to increased protection, its survival is still tenuous. The fate of an entire species rests on the responsible management of their wetland ecosystem. A recent proposal by various stakeholders has suggested Pumlen Pat and the adjoining Thongam Mondum Reserve Forest as possible sites for the reintroduction of the sangai due to similarities with KLNP. Reintroduction in other sites could buffer the species to some degree.

Is the sangai doomed to its last dance or can we ensure its persistence in the ever-changing human- nature interface of India’s Northeast? 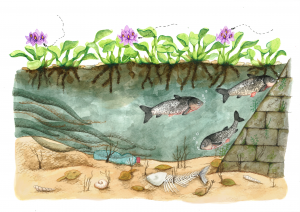 Priya Ranganathan is a Research Associate at the Ashoka Trust for Research in Ecology and the Environment, Bangalore, where she works on wetland ecohydrology and conservation. She has a M.Sc. in Ecosystem Science and Conservation from Duke University and when not at the office, can be found dancing, writing, or drinking cups of steaming hot chai.

Labonie Roy is a self taught illustrator and nature lover, who collaborates with environment and conservation based organisations. In her spare time, she loves to cook, repurpose her old clothes and experiment with zero-waste DIYs.