Books from the attic| Matthew Godfrey| 6.2

Despite its age, this book on sea turtle conservation remains relevant today 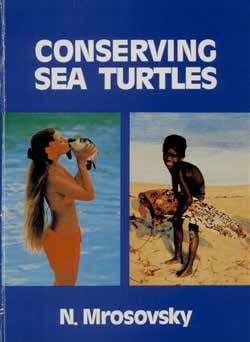 In 1983, the British Herpetological Society published and printed 1000 copies of a small blue paperback book. The author, Nicholas Mrosovsky, said he wrote this book to analyse various procedures and problems associated with sea turtle research and conservation, and thus facilitate more discussion and eventual improvement in techniques and measures. Prior to this, he already had a reputation as an excellent researcher, publishing seminal work on thermal biology, seafinding behaviour and hatchling sex ratios of sea turtles. He was also the founding editor of the Marine Turtle Newsletter, which was a vehicle to facilitate dialogue and exchange of all points of view on sea turtle conservation. This book, however, established him as someone who wanted to ask difficult questions and create a forum for debate. Even the photos on the book’s cover appear designed to stimulate discussion: on the left is someone kissing a live green turtle; on the right is a small child holding a flipper from a butchered leatherback. The book’s publication stimulated several long reviews in various journals; some were supportive, others less so. Currently, although this book is still occasionally cited in published papers, it appears to be somewhat forgotten, and was not mentioned in Peter C.H. Pritchard’s historical review of sea turtle monographs in his introduction in the recently published book, Sea Turtles of the Eastern Pacific (J.A. Seminoff and B.P. Wallace, eds., University of Arizona Press, Tuscon). This being the 30th anniversary of its publication, it is prudent to reflect on the relevance of this book to current sea turtle conservation.

My first reading of this book was in 1993, and I was greatly influenced by many of its arguments and positions. Reading it now, I find that many of the issues remain highly relevant today. For instance, Chapter 3, entitled “The Tagging Reflex,” reveals that many researchers and conservationists were applying flipper tags to sea turtles without considering why they were doing it or how to interpret the tag return data. The same thing is happening today, although it now includes satellite tags, critter-cams and other types of telemetric gadgets. Although there is great potential value of mark-recapture and telemetry data from sea turtles, Mrosovsky clearly articulates the importance of setting up testable research questions before embarking on a tagging project. Chapters 10 and 11 deal with the issue of whether sea turtle species deserve to be considered highly in danger of going extinct. This remains an important question in the sea turtle community (and beyond)—recently an entire issue of the journal Endangered Species Research was devoted to the relevance of placing species, including sea turtles, on the IUCN Red List, the global authority of species in danger of going extinct. One of Mrosovsky’ main points is that a defendable scientific approach towards assessing risk would greatly improve the way species are categorized as being threatened with extinction. Chapter 8, on farming of sea turtles, remains topical, particularly with the recent debate over husbandry conditions at the turtle farm in the Cayman Islands. Again, one of Mrosovsky’s main points is that analysis based on biological data would greatly enhance discussion and provide room for setting up testable hypotheses and benchmarks.

Of course, given its age, there are some subjects that are no longer “burning issues.” For instance, few today would argue that the black turtle, Chelonia agassizi, warrants official recognition as the eighth species of sea turtle. Similarly, the chapter on head-starting (captive rearing for the first few years of life before release back into the wild) of Kemp’s ridleys is mostly moot, as the program ended in 1993. Yet at the time, these issues engendered debate within the sea turtle community. Rather than take sides, Mrosovsky suggested that the best approach would be to study each problem empirically, and develop testable hypotheses that would serve to resolve the debate. This is exactly what happened in the early 1990s when new molecular biology techniques were applied to green turtles and showed that there was no eighth species of sea turtle. Still, these chapters are of interest, as they provide the historical context of sea turtle conservation.

Upon my latest reading, I found Chapter 14 as riveting today as it was the first time I read it. This chapter addresses the sustainable harvest of sea turtle eggs. Unlike the other issues discussed in the book, such as tagging and tag loss, and hatchling sex ratios, which have generated a fair amount of research and publications by different researchers since the publication of this book, there has been limited research in the area of consumptive use of sea turtles, and policy seems unchanged since 1983. For example, the IUCN Marine Turtle Specialist Group has avoided addressing the topic in two important documents: its Global Strategy for marine turtles and its manual of research and management techniques. Yet, consumptive use of sea turtles continues in various places around the world and has been a major source of debate at international meetings on animal trade (e.g. CITES). Like many of the subjects of this book, sustainable use of sea turtles is contentious, but Mrosovsky argues that the debate would be much improved if scientific data were brought to bear. However, in this case, the lack of widespread debate or discussion impedes progress on this issue.

This was the first small book of three that Nicholas Mrosovsky has written and they all feature constructive commentaries and critiques of various issues in sea turtle conservation. This first book in particular personifies the author’s reputation in the past few decades, in that he has rarely shied away from asking challenging questions concerning thorny issues, either at meetings or during online discussions or even during field-site visits. While some may not agree with his ideas, few could say that they have not been influenced by him or his writings. This book in particular remains highly informative and potentially influential— potentially because it is long out of print, so new readers will have to rely on colleagues who may be willing to loan out this book. It is highly worth making the effort to find a copy and regardless of whether you agree with its contents, this book will be sure to make you think.