Pink birds in the red

The majority of the world’s flamingos are of conservation concern; can they be protected? 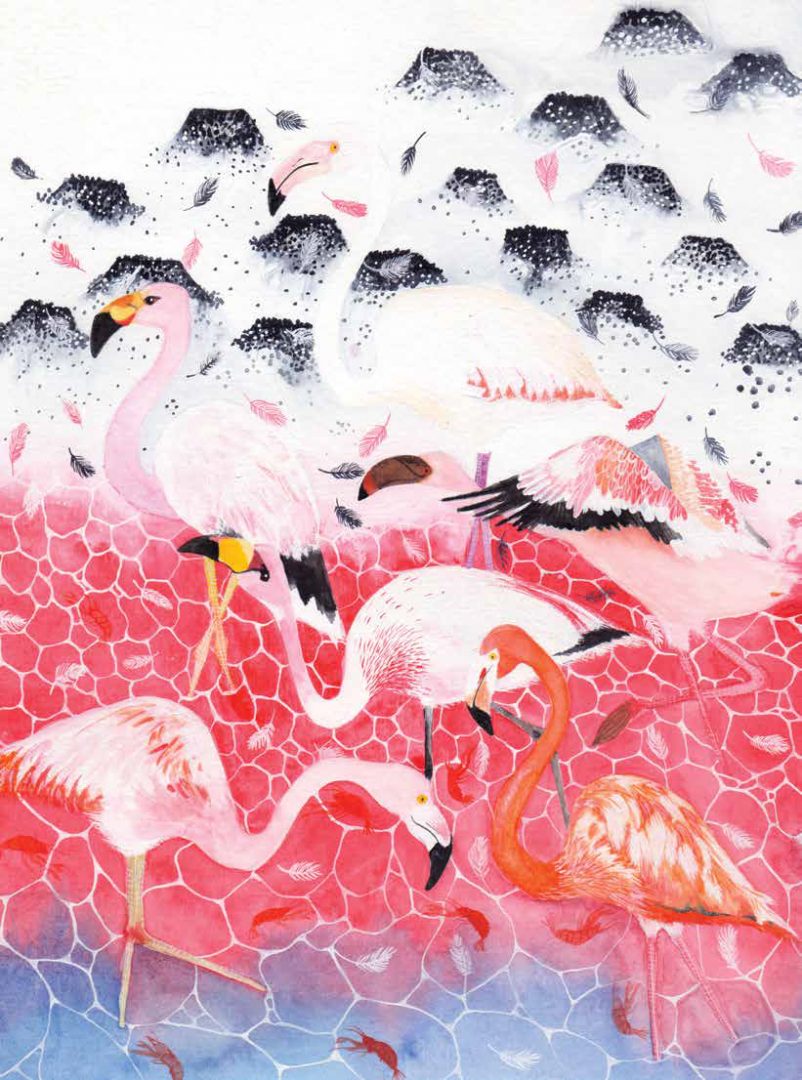 Flamingos have been described as both the most charismatic of all bird species and one of the most recognisable. While some might argue with the former claim, few would challenge the latter. Thanks to their bright, cheerful plumage, hefty, crooked bill and spindly legs—one often held aloft in that iconic balanced position—flamingos can easily be identified by people around the world.

All extant flamingos require habitats characterised by a single common feature: shallow saline pools. These can be fed by underwater springs, ocean waves, rivers, and—perhaps most importantly— rain. Water in flamingo habitats is often saltier than the sea and may contain compounds that are toxic to many species if consumed in large doses. This seemingly inhospitable habitat is perfect for brine shrimp, small molluscs, diatoms and cyanobacteria—all potential prey items for flamingos. Because so few animals can tolerate extremely salty environments or figure out how to collect the tiny particles of food available there, flamingos have been able to exploit this niche virtually uncontested.

It can be difficult to census flamingos because they tend to live in such remote, impenetrable wetlands. To make matters worse, the birds have a habit of relocating frequently and unexpectedly, which means that researchers may show up to known flamingo haunts only to discover they have just been vacated in favour of grounds that are tens or even hundreds of kilometres away. Available data indicate that global population sizes vary widely from one species to the next; the least abundant species is the Andean, with only 34,000 individuals, while the most common is the lesser, with as many as 3.2 million birds.

These numbers, however, belie the complexity of flamingos’ conservation situations. All three South American species are threatened by anthropogenic disturbance and habitat destruction; while Andeans are considered ‘vulnerable’, punas (100,000 individuals) and Chileans (200,000 individuals) are listed as ‘near threatened’. This is also the status of lesser flamingos, 90% of which breed at a single site that is threatened by industrial developers. Only the American (330,000) and greater (680,000) flamingos are listed as being of ‘least conservation concern’.

It’s not entirely surprising that so many flamingo species should be under threat; the pink birds have a long history of unpleasant interactions with humans. Phoenician traders are reported to have transported flamingos to Cornwall, UK, where the birds were passed off as phoenixes and traded for tin. Flamingos were kept in captivity by the Egyptians and some groups of Native Americans, and flamingo meat was enjoyed by people of several cultures—though perhaps most of all by the Romans, who have recorded for posterity recipes for properly preparing flamingo tongues for delectation. Even today, the birds are sport-hunted or poached across their range. The illegal slaughter of dozens of adult birds caused an uproar in India in early 2012 because it occurred when hundreds of preeminent ornithologists and birdwatchers were visiting Gujarat for the Global Bird Watcher’s Conference.

Flamingos are also known to be negatively impacted by nearly all forms of human traffic, including planes, boats, and all-terrain vehicles. Both the noise and visual disturbance caused by these vehicles disrupts feeding and breeding efforts and may even lead to habitat abandonment. Ironically, much of this traffic is associated with ecotourism activities that are supposed to generate funds for protecting the birds over the long term.

Even more worrying is the fact that flamingo habitat is under nearly constant threat from human activities such as mining, farming and urban expansion.These activities can reduce the quality of feeding and breeding sites by altering water pH, introducing invasive species that out-compete flamingos for food, removing water (for use in irrigation or to facilitate easier access to minerals), and introducing dangerous structures such as power lines, with which flamingos can become entangled while flying. In the Mediterranean, where native greater flamingos often come into contact with escaped lesser, Chilean, and American flamingos, researchers worry about the potential detrimental genetic and behavioural effects of mixed-species breeding attempts.

One of the most contentious issues is the proposed construction of roads through irreplaceable flamingo habitat. This has been one of the biggest threats to lesser flamingos at Tanzania’s Lake Natron—the single most important breeding ground in the world for lesser flamingos. As detrimental as the road itself could be, even worse is the accompanying plan to open a soda extraction plant that could alter water levels at the lake, thereby potentially reducing the quality and quantity of food available to the birds. Over the years, several proposed developments have also threatened to degrade habitat near the ‘flamingo city’ in India’s Rann of Kutch. Biologists fear that construction in this area will alter water flow and reduce the accessibility of vital flamingo food resources.

Another worry is climate change, which could render favourite habitats unsuitable for feeding or breeding by either drying them up or flooding them to the point that they no longer have the pH required to sustain flamingos’ primary prey. Changing water conditions might also encourage blooms of toxic algal species or the spread of harmful bacteria—issues that have already been implicated in the deaths of large numbers of water birds in Africa. Flamingos are incredibly sensitive to subtle variations in their microhabitat and may decide to forego breeding if they perceive that environmental conditions are not optimal for nesting. While some flamingo populations have readily adapted to anthropogenic environments, this is not generally true. This suggests that the birds would not be likely to utilize man-made alternatives introduced as replacements for degraded natural areas.

Worldwide, conservationists have already initiated several efforts to get the threatened birds out of harm’s way. Important habitats for the South American species have been given official protected status, and activists are hard at work to achieve a similar goal at Lake Natron and other African lesser flamingo haunts. Anti-poaching laws have been introduced in some regions and guards have been hired to protect flamingo colonies throughout the breeding season. Perhaps most importantly, researchers have been working on surveying more flamingo habitats—particularly in South America. These intensive efforts are vital for finding out how many birds remain, whether populations are stable or fluctuating, and which flamingo habitats most need to be protected. 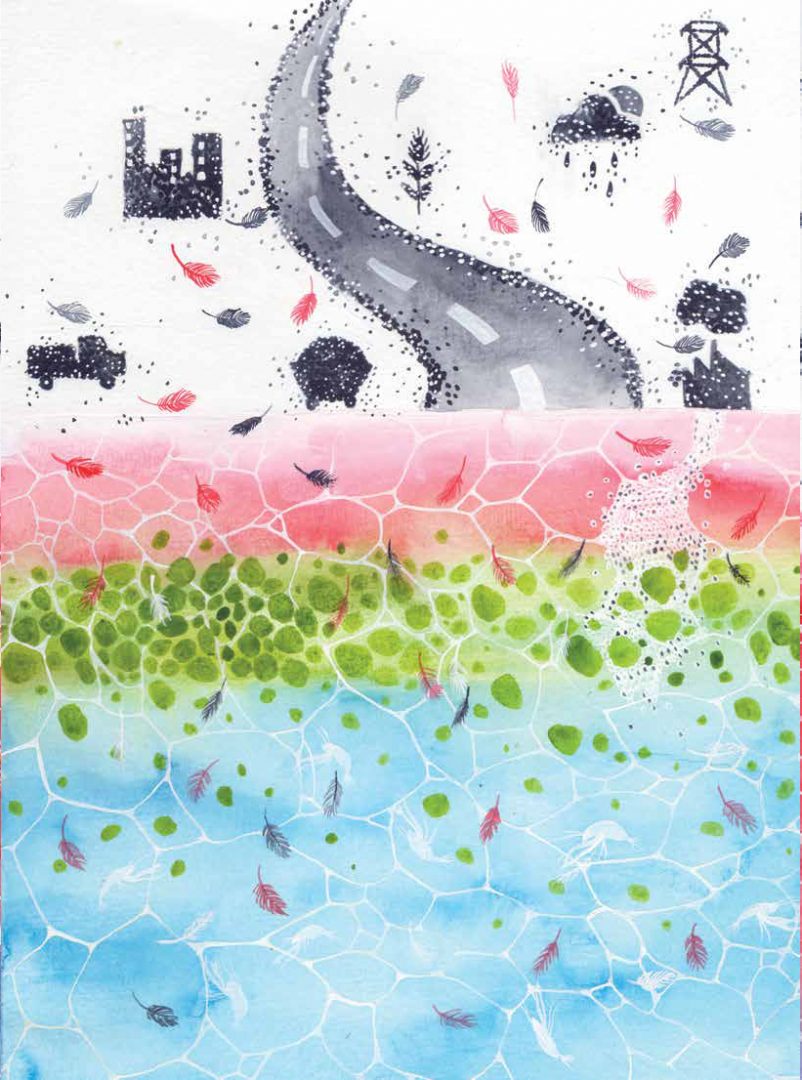 However, flamingo conservation efforts do not just involve wild birds and field researchers, but also captive birds and aviculturists. Over the years, observations of flamingos at zoos and parks have provided a wealth of information on the birds’ natural histories—particularly for the three South American species, which are difficult to locate and study in the wild. Another benefit of captive flamingo populations is that they are a huge draw to visitors whose admission fees are often funnelled directly into conservation efforts. Outside of zoos, the majority of visitors are unlikely to have an opportunity to see flamingos in the wild. As a result, captive facilities are a vital tool in the campaign to raise awareness of, and support for these threatened birds.

Although it has taken many years, aviculturists have finally worked out how to keep flamingos happy and healthy enough to breed in captivity. This has been a boon to conservation efforts for two main reasons. First, sustainable captive populations reduce, or even remove, the need to import wild-caught birds—a process that is always associated with the risk of injury and death to the birds, during both trapping and shipping. Second, maintenance of a large and healthy global population of captive birds acts as an insurance policy against any catastrophes that happen in the wild. Captive flamingos may some day be an important source of genetic diversity required for re-invigorating wild stocks, or, if captive breeding programs reach their full potential, they could even be used to produce birds that can be released into natural flamingo habitats. 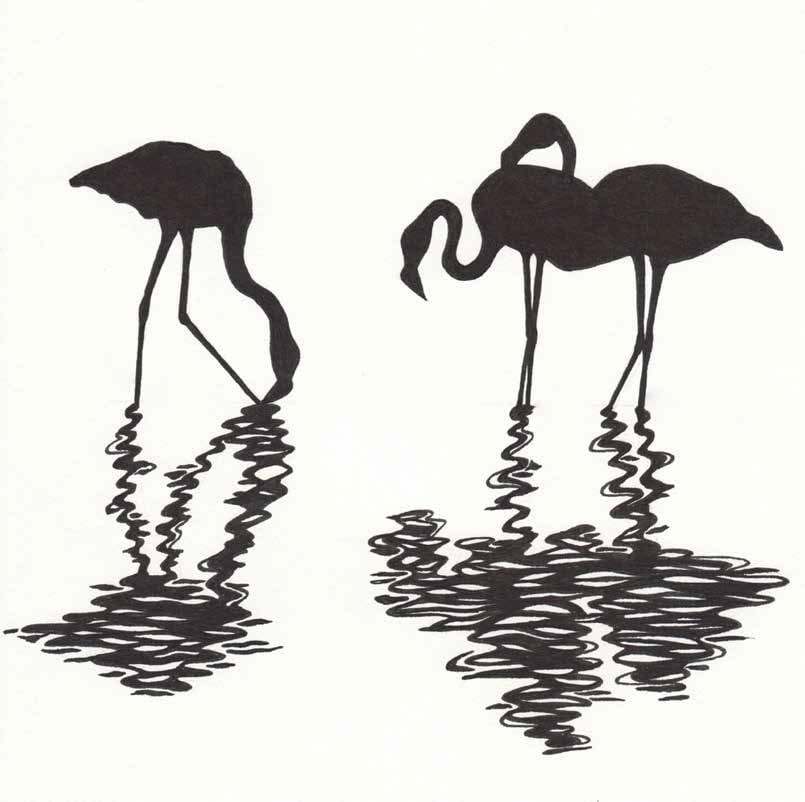 Recently, there has been increasing interest in keeping captive flamingos happy as well as healthy. Perhaps unsurprisingly given the fact that where there is one flamingo, there is usually another, an integral part of happiness is a satisfactory social life. Observations of ‘friendships’ and ‘coalitions’ within flocks can help managers decide, among other things, what the optimal flock size is, how much space birds need before they start getting on each other’s nerves, and which sex ratios are optimal for promoting breeding behaviour. By being aware of which birds prefer to flock together, aviculturists can also avoid separating ‘friends’ when moving birds between enclosures or giving animals away to other facilities. Studies of sociality in flamingos could also provide insights into group dynamics of other species—including humans.

Regardless of whether we’re watching flamingos in order to learn something about ourselves or just to admire their beauty, it is hard not to be impressed. Although they may look delicate and slight, these deceptively hearty birds manage to survive in some of the harshest habitats on earth, and have been doing so for millions of years. We can only hope that efforts to protect flamingos and their habitats will keep these living fossils around to brighten many more days over the generations to come.

Caitlin Kight is an editor, writer and educator affiliated with the University of Exeter’s Penryn Campus, caitlin.r.kight@gmail.com, http://www. caitlinkight.com