Introduction to the Red Panda

In March 2019, I was in eastern Nepal’s Bhojpur district for conservation work about red pandas. Suddenly, I found myself in the Bhalukhula Community Forest, an area our guide explained had never had foreign visitors before. I was struck by the vast differences from the Colorado forest I am used to. The Bhalukhula Community Forest never burns, it is old dense growth and the forest floor is covered in moist decaying leaf litter. The trails are only used by locals crossing into other districts and not overrun for recreation. The only forest protection in place is those enforced by local community members.

With the guidance of a local cattle herder and the community forest president, we trekked through the area in search of evidence of red pandas. The forest was so dense with bamboo and trees in some areas that we couldn’t fit through and needed to retrace our steps. We climbed rock walls, crossed waters, and slid down steep slopes. The woods were quiet, the lack of human presence ominous. It was hard for even our experienced guides to wade through the terrain, but despite this, everywhere we hiked, there was a local variety of cattle – called chauri. Evidence of the impact of cattle disturbance on the red panda habitat was startling and unexpected. This experience I connected with red pandas – that the world needs to know more about these amazing creatures and what we can do to protect them.

After returning from Nepal, I became increasingly determined to share the plight of this unique animal with the world and raise support for its conservation. Understanding their natural and evolutionary history is essential to protecting them in the wild. The red panda (Ailurus fulgens) from the order Carnivora is an endangered arboreal mammalian species with a curious and debated evolutionary history. It lives in high elevations range of 1500 – 4000 meters, is a size similar to a housecat, and has distinct red-colored fur with a long, ringed tail. The red panda is currently found in temperate forests of China, Nepal, Bhutan,India, and Myanmar. Throughout its range, it is primarily threatened by habitat loss, fragmentation, poaching, and illegal pet trade. Red pandas are an indicator species, with their declining populations foreshadowing larger ecological issues in their forests and the growing problematic effects of climate change.

Like the giant panda, bamboo is the main food source of the red panda even though it is classified as a carnivore. In fact, the controversy surrounding the taxonomic lineage of the red panda has lasted for nearly two centuries. Only recently has molecular research and new fossil evidence revealed that this unique and elusive species is a living fossil, whose close relatives – Simocyon batalleri – are only known from the fossil record.

Who is the red panda?

Historically, the red panda has been grouped with many other families or clades in the order Carnivora, such as Ursidae, Pinnipedia, Mustelidae, and Procyonidae. It was once grouped in a family with only the giant panda, who now is long established to be in the Ursidae, or bear family. The red panda currently lies in its own family, Ailuridae, due to its unique traits, diet, and its relationships to the other carnivore families who remained undetermined and debated for so long. We now know that Ailuridae split off from its ancestors into its own family after Ursidae and Pinnipedia (seals, sea lions and walruses) and has long been in a category of its own.

In recent years, researchers have gained a better understanding about the evolution of the red panda due to fossils that have been found from the Miocene Period. These relatives had primitive carnivore dentition that did not yet show evidence of the herbivore tendencies red pandas have today.

Simocyon batalleri is an example of one of these ancestors and has been studied and categorized as an Ailurid because of the similar adaption of the carpal bone and skeletal features which showed a propensity for climbing over other forms of locomotion. The Simocyon batalleri skeletal adaptations evolved for climbing and an overall arboreal lifestyle because it was important for its survival. It was a small carnivore that needed to adapt to compete and retreat from the larger carnivores of its time. This need to climb also contributed to the adaptation seen in the radial sesamoid. The radial sesamoid evolved as a false thumb for the purposes gripping vegetation which improved climbing. In the red panda we see today, this adaptation functions for both improved climbing as well as for a secondary purpose, gripping its primary food source bamboo.

The modern red panda belongs to the subfamily Ailurinae, which previously had a geographic distribution that was spread throughout Europe, Asia and North America. This indicates that the ancestors of the red panda were once found in the United States. Ailurinae’s biogeography was greatly affected by a changing climate and the growth of temperate forests in the Miocene and Pliocene, causing migrations that resulted in widespread populations. The current range of the modern red panda is small, highly fragmented areas in western Asia.

How the red panda adapts and evolves 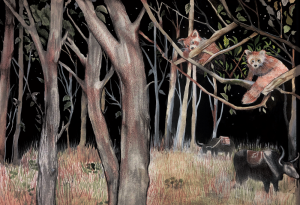 It wasn’t until I visited Nepal that I witnessed just how well the red pandas’ red fur helps them camouflage. In the forest there were many trees with the patches of red moss growing on branches, while their dark colored undersides and legs keep them hidden from predators looking below. The guides informed us that even to their trained eye it is difficult to spot these elusive animals.

It is a species with unique adaptations making it well suited for its arboreal lifestyle and specialized diet, traced from those ancestors dating back millions of years. The red panda has additional adaptations that have evolved to help it better survive in its high altitude home range. Furred paw pads allow for better gripping of logs and trees, aiding its arboreal lifestyle, as well as ensuring the paws stay warm in the cold climate. A long, bushy tail helps with balance, locomotion, and can wrap around its body to keep itself warm. Their striking red color was originally a mystery to me.

The red panda has several muscular and skeletal adaptations that also assist with climbing. One of these adaptations, a flexible joint connection between the tibia and fibula bones, allowing the fibula to rotate on its axis enables their ankles to rotate so that they can climb down trees head first. Red pandas are one of only a few animals in the world that can climb down trees head first and this helps protect them from being vulnerable to predators.

Due partly to its bamboo diet, the red panda evolved an unusual adaptation of the radial sesamoid, which is enlarged to act like an opposable thumb to grab and hold bamboo. This is an adaptation it has in common with the giant panda (Ailuropoda melanoleuca), and is an example of convergent evolution.

In the Bhojpur district, many of the local people I spoke with did not know what red pandas were at all, let alone that there are two subspecies. Some locals referred to the red pandas as tiger babies and were frightened of them. In the Bhalukhula Community Forest, the local people believed in the folklore that when red pandas touched any metal object made of brass would glow, adding to the mystical perceptions of the red panda in Eastern Nepal. 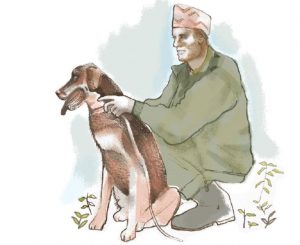 Tails for the future

Red pandas face many looming threats. Mainly due to their elusive nature, one of the issues contributing to these threats is a lack of research and data on their biology, populations, and ranges. Red pandas have evolved to fit narrow ecological niches that must be maintained for their survival. These niches require temperate forests with dense bamboo cover, fir trees, and fallen logs, coupled with specific elevations, temperatures, slope, and proximity to water. Currently, their habitat is disappearing and fragmented, and populations occur in small densities mainly because of human development and livestock herding impacts. Although many protected areas have been established in order to support their conservation, it has been estimated that more than 77 percent of red pandas live outside of these protected areas. Red pandas are also being threatened by parasites, and diseases spread from domesticated animals like livestock and dogs, in particular canine distemper, a high incidence of infant death in the wild may be attributed to their susceptibility to these novel parasites and diseases. Poaching using snare traps are also a great threat to their continued survival, particularly in Nepal and India.

In recent years, illegal trade – both for red pandas as pets and for their parts – has become an increasing threat for these adorable animals, but little is known about where the captured red pandas are going. The appeal of the red panda is no secret to anyone who has seen them in zoos or online, but they do not make good pets for numerous reasons. Red pandas have an incredibly shy nature and require a specialized and expensive diet, mainly fresh bamboo constantly throughout the day. Red pandas defecate many times a day due to their diet, and not usually in the same place. They prefer to be up high in trees; how many people can realistically provide this in their homes?

The red panda’s conservation needs to be supported by programs that work towards gaining more knowledge of these amazing creatures through coordinated field work in their remaining habitat ranges. It is also important that the countries and communities in proximity to red panda habitats work together towards their conservation, in order to effectively enforce laws protecting wildlife from being trafficked. Restoring habitats is another important effort that needs to be made to repair damage caused by livestock and deforestation.

Educating and working with communities on sustainable livestock management and timber use is another way to bolster red panda conservation. There needs to be collaboration between countries to develop and expand protected areas and corridors. Amazing work is being done and programs have been created, in particular by the Red Panda Network, but more needs to be done if the species is to be saved. They have created community based conservation programs like the Forest Guardians, where local community members are trained to monitor the red panda habitat in their area and provide education on the red panda. They also focus heavily on lessening the impact the local people have on the forest while respecting the needs of the community members’ livelihoods. This is done through providing improved cooking stoves, teaching sustainable herding and livestock management, and education on the dangers of free-roaming dogs. Community-based conservation is just one approach that can shift perceptions and create local investment in the conservation of a species.

The red panda is a remarkable and mysterious species whose evolution and historical biogeography still has significant gaps and continues to be debated. Only time and new fossil evidence will uncover the important information needed to better understand the red panda’s place in the order Carnivora and its historic geographical distribution. The threats facing the red panda are many but there are conservation efforts being made that need support. Spreading awareness of this incredible animal will help ensure their long-term survival. How can the world afford to lose such an amazing and unique species?

Sonia Holmstrom who recently received her graduate degree from the University of Miami, Ohio, is an animal keeper in Alaska, and is a Red Panda Conservation Liaison for the Katie Adamson Conservation Fund.

Tanuja Ramani is an artist/illustrator exploring themes related to the interplay between our collective human behaviour as cultures and societies, and the natural world. She creates artwork for books, magazines, products, and packaging, as well as a collection of art prints and illustrated products.