Quest to find an elusive snail 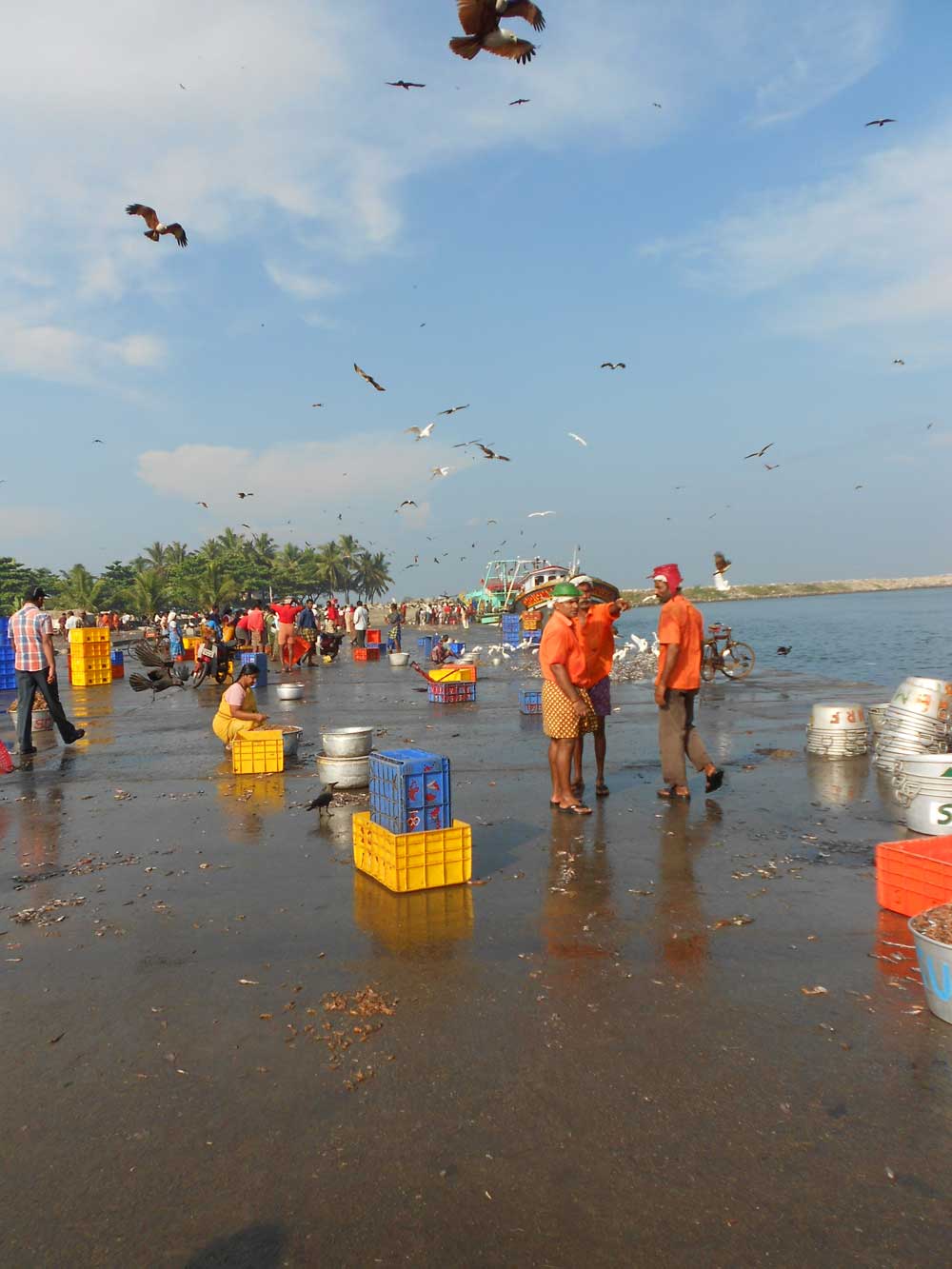 A morning at Shaktikulam harbour

I will remember the smell of fishing harbours for a long time to come.

It threatens to overwhelm at first. Then, it jostles for competition with other sensory assaults: shouts of fishermen auctioning their fish and people declaring their bids; loud colours of saris, lungis and fishing trawlers; the cries of fishermen on their boats passing crates of fish to each other and the ‘thud!’ as the crate lands on the floor of the harbour, hundreds of people busily doing things. My thoughts are interrupted, suddenly- a group of fishermen obscure my view and hastily tell me to move out of the way as they haul a large yellow-fin tuna away from their boats. The floor of the harbour is wet, parts of it speckled with fishscales that glimmer dimly. The wetness clings to my sandals.

I am with Bharti DK, a PhD student of the Indian Institute of Science and Sajan John, a researcher with nuggets of wisdom about everything under the sun and the sea. Bharti’s quest to find an elusive, unassuming marine animal has brought us to the fishing harbours of Kerala. She wants to find out how this animal disperses and how such dispersal might shape its populations.

Bharti holds a shell in her hand, a conical shell with spirals and a delicate minaret. It is the former home to a snail called Conus, one of the species that she is interested in. Conus is usually found ten metres into the sea and sometimes caught as by-catch by the fishermen. “Have you seen this shell?” we ask the fishermen.

Some of them peer curiously at us from their boats and ask us what we are there for.

They point us in the direction of heaps of fish and other marine life they are not interested in. There are people sorting these heaps. Fish that can be sold go in one pile, the rest go in another. A few of these people enthusiastically look for Conus, throwing us any shell that vaguely resembles it. For a short while, our quest becomes their quest. I am easily distracted. Above us, the sky is a blur. There are crows, brahminy kites and egrets circling the boats. Every now and again, one of them swoops and steals a fish from the boats. Sometimes a fight breaks out between the birds as they pilfer each other’s catch.

We prod the heaps of marine refuse with a stick, looking for Conus. Some of the heaps still writhe with life. Hermit crabs stumble out in a daze. Sajan points out some beautiful creatures called sand dollars. They are flat and round and fit in the palm of my hand. I look closer and notice patterns of petals etched on them. I quickly pocket them to add to the growing hoard of nature’s treasures in my room, little knowing that the pretty creatures would gently fill my bag with a putrid odour and metamorphose into a brown, unrecognisable slush. 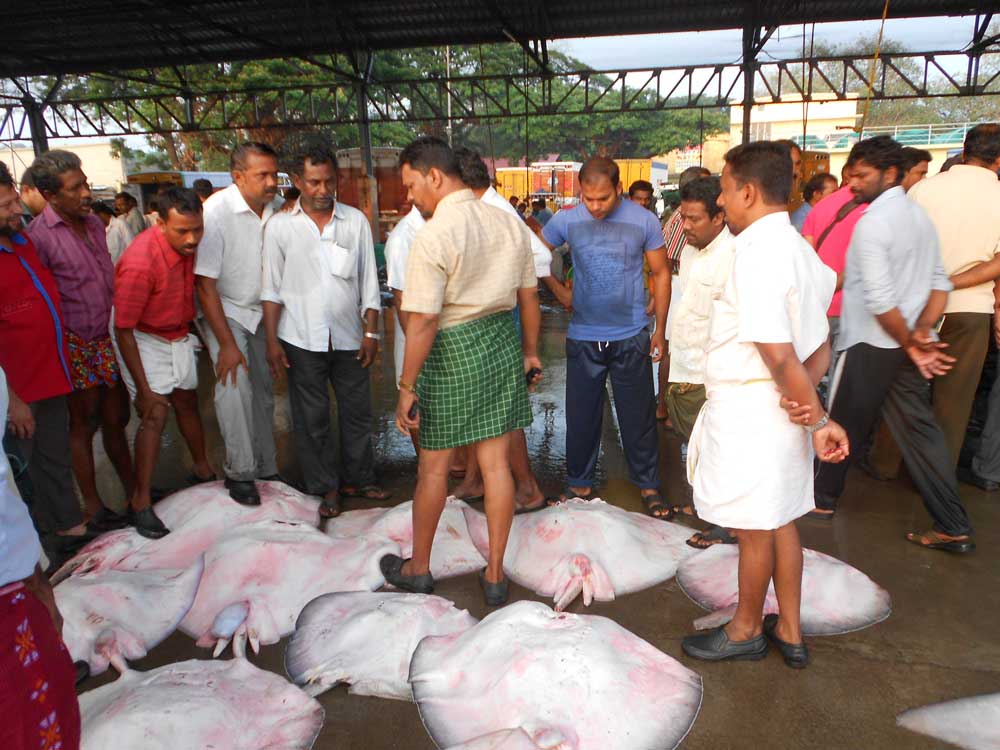 An auction of rays in progress

In one of the harbours, a big, burly fisherman followed by an entourage of his colleagues, towers over us and asks us what we want. Sajan explains at length. The fisherman disappears into his cabin and comes out holding a shell. It is a species of Conus called Textile Cone which looks like porcelain etched with fine zigzag lines. However, like most other shells we found, its inhabitant is absent.

Back in her laboratory in Bangalore, Bharti will extract DNA from Conus snails from different locations. From its DNA, she will be able to understand the genetics of each population, and find out how related populations are to each other. Some Conus species travel long distances as larva, while others are sedentary. Bharti wants to find out why this is so, what it is about each species that determines how far its young travel. She will use the genetic relatedness of populations to estimate how far a species’ larva travels. The logic is simple : the further the larvae travel, the more will be the genetic relatedness of separated populations.

The fishermen sometimes ask us to come aboard their boats where fish are still being sorted. Picking our way across boats, we see fishermen lolling on their sides, tired from their sojourn at sea. Some of these boats have spent many days at sea, going as far as Pakistan. Not bothering to get up or shift from their reclining positions, the fishermen ask us what we want, and pass around the Conus shell that we show them. Often they make us run in circles: fishermen of the smaller fishing boats tell us to go to trawlers; the men of the trawlers send us back to the small fishing boats. 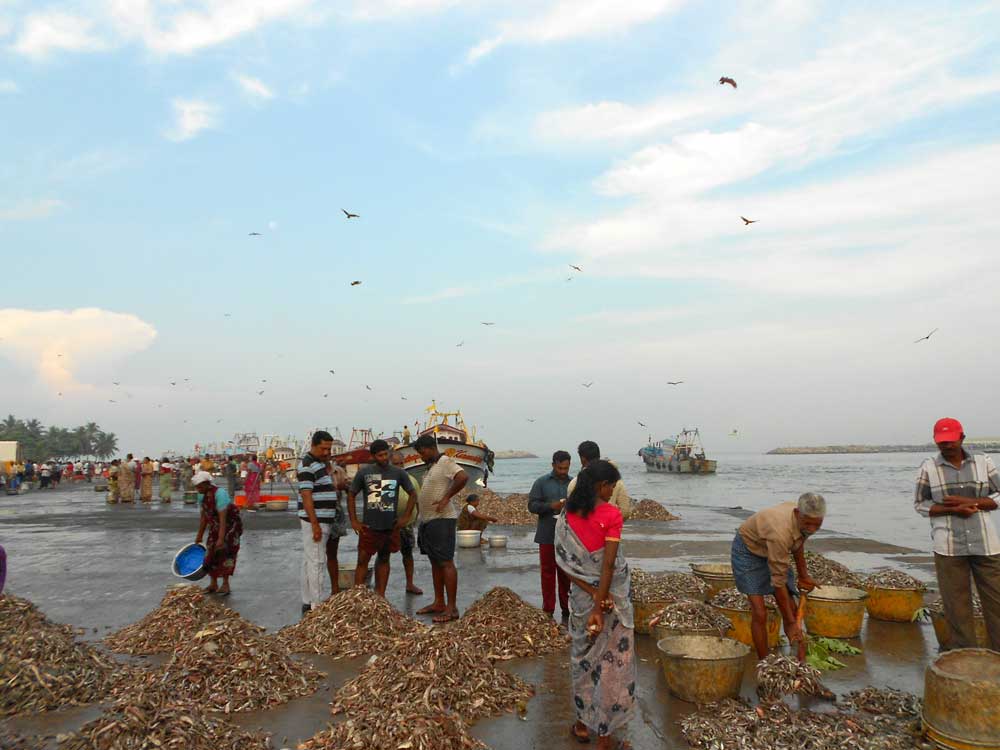 This has been the general routine in the six fishing harbours we have gone to from Thiruvanathapuram to Kozhikode. Each time we near the harbour our driver announces, “The smell has come!” We don our hats, roll up our pants and let ourselves be enveloped by the bustling masses of people.

The harbours are intriguing with all their activity, but it is sad that my first introduction to many beautiful creatures of the sea is when they are lying lifeless on the harbour floor. Here are marlins with their enormous, jagged fins which look like they jumped straight out of someone’s imagination; here lie eagle rays with little heart-shaped depressions on their bellies; sharks that look sinister even in death; pearly-white, translucent squid oozing out their black ink; plump yellow-fin tunas—their tiny yellow fins contrasting sharply with the grey of their bodies. 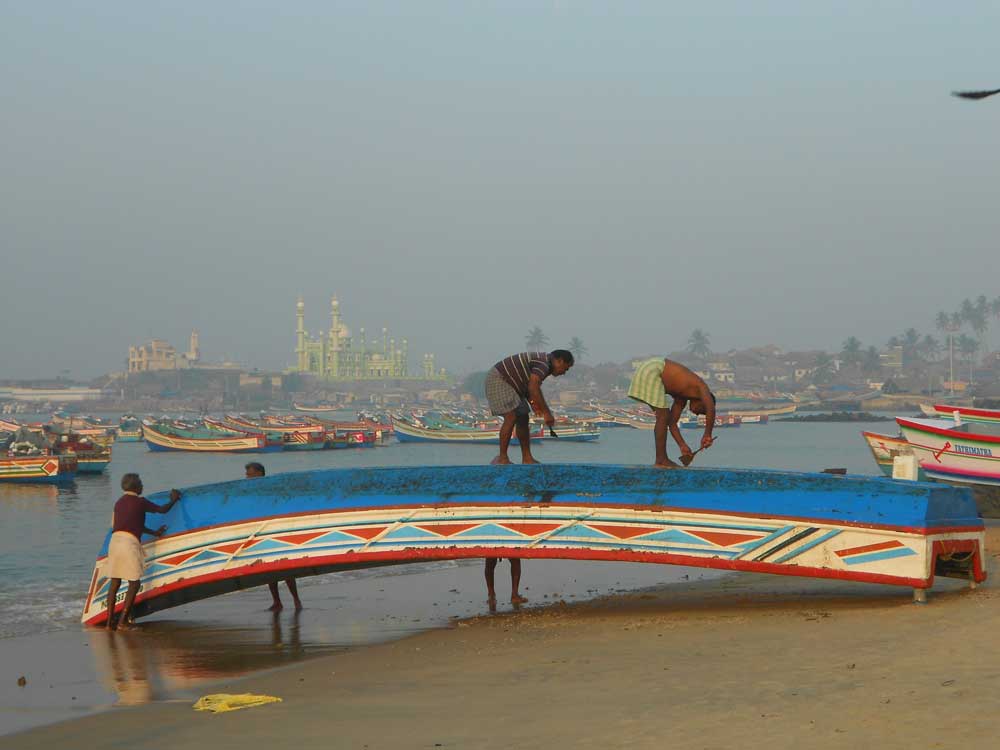 Fishermen scraping barnacles off their boats

Before the fishermen return in their technicolor boats when the sun’s rays are still only an hour old, the harbour is in a lull. Then, in a few hours, the activity in the harbour touches fever-pitch and then lapses again into a sleepy restfulness. People from big hotels, exporters and fishmongers arrive at the scene and wait for the arrival of the fishing boats. Some of them form little knots and watch the sea. A few fishermen sit by their boats and mend their fishing nets as the sun rises over the harbour. Once the boats dock, a flurry of activity ensues. Boats are cleaned; barnacles scraped off; smaller fish sorted out; bigger fish bodily dragged out of boats, pulled through a mass of humanity and then auctioned. As soon as a new load of fish is brought to the harbour, a crowd of people surround it and an auction starts without preamble. Once done, the crowd dissolves and forms at another site.

We stand out amidst the throng. The fishermen allow us to interrupt them to ask them about the shell.

“Have you seen this shell?” We ask over and over again. “Do you know where we can find it?”

After this frenzy of activity the pulse of the harbour slows. Fishermen laze in their boats, tell each other about the day’s happenings and catch a few snatches of sleep. Some gather for a game of cards in the shade of the harbour.

As we come away from the harbour, I am reminded of the fishing markets in Asterix comics, always bustling with activity and incident. We learn towards the end of our quest, that there is a separate fishing season just for Conus and other ornamental shells, and we had come at the wrong time. That may be another chapter in Bharti’s quest. As for me, I am content with the opportunity this quest allowed me, to peek into the lives of fishermen, entwined as they are with those of the fish in the ocean.

Anisha Jayadevan is doing her MSc in Wildlife Biology and Conservation at the National Centre for Biological Sciences, Bangalore, deliriousdandelion@gmail.com.