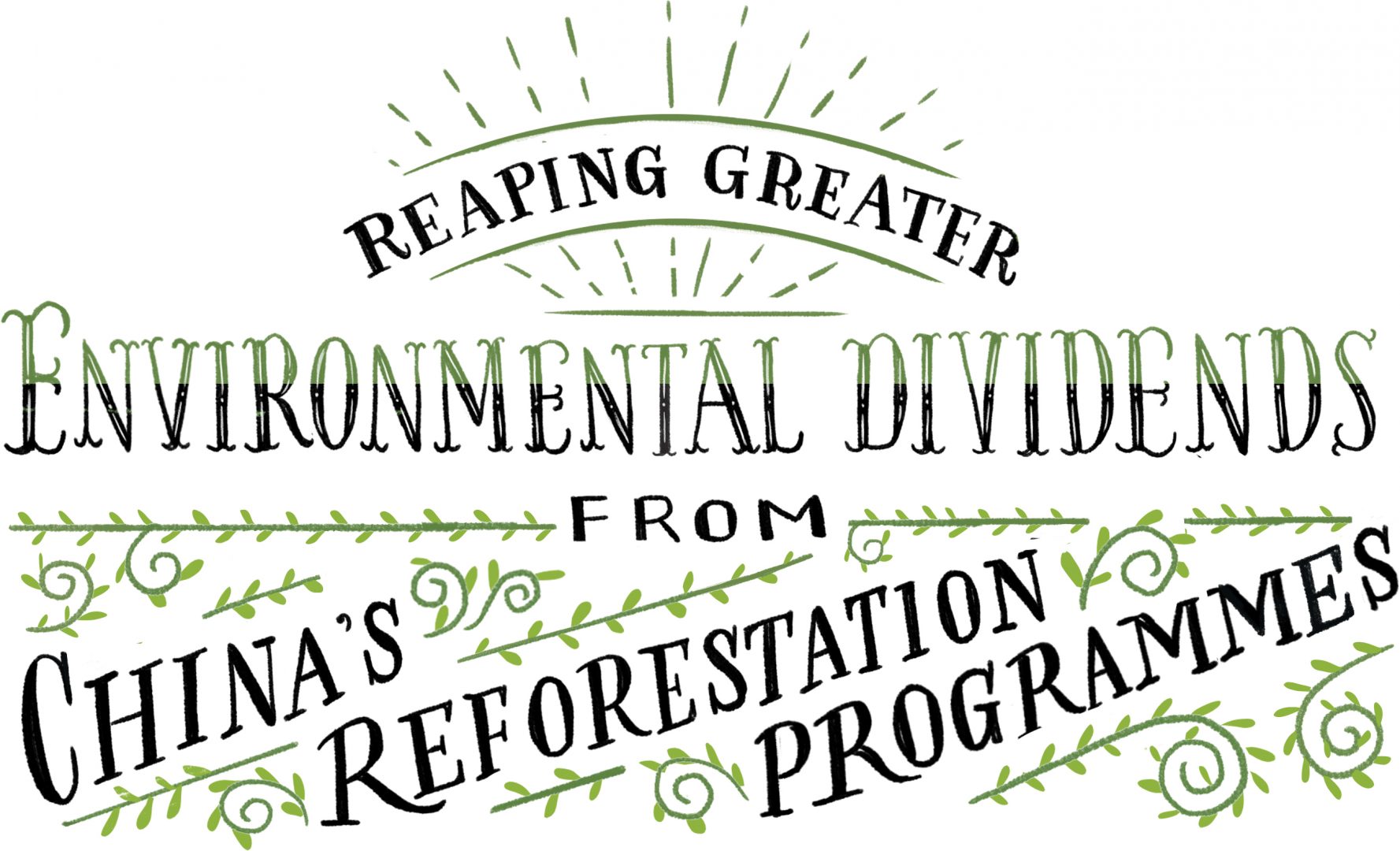 Echoing a similar story the world over, native forests in China have historically suffered severe losses linked to the expansion of agriculture and production forestry. As the ultimate source of agricultural land in much of China, native forests gradually dwindled over thousands of years, before the shock of the Great Leap Forward at the end of the 1950’s when remaining native forests were extensively cleared to harvest fuel wood and expand agriculture. Industrial logging of native forests was completely unregulated in China until the mid-1970’s and continued well into the late 1990’s (Richardson 1990). In the meantime, large-scale deforestation for plantations and particularly rubber plantations in tropical southern China, further exacerbated the destruction of native forests.
Recognising the deleterious environmental consequences of forest loss, the Chinese government has long embraced reforestation as a mitigation strategy. Since as early as the late 1950’s, reforestation has been extensively implemented using manual planting and aerial seeding. However, it was not until the massive floods across the country in 1998 – widely attributed to unchecked deforestation – that systematic nationwide reforestation programs were put in place. The Natural Forest Protection Program (NFPP) and the Grain-for-Green Program (GFGP) are not only the largest in China, but are also among the world’s biggest and most extensively funded.
The NFPP, in effect in 18 of mainland China’s 31 provinces since 1998, was a direct response to the 1998 floods. Aimed at protecting native forests and safeguarding against floods, it employs a combination of logging bans, natural regeneration and the establishment of plantations for alternative timber supply. The GFGP aims to curb soil erosion by providing incentives for households to retire and reforest croplands on slopes prone to erosion, thus replacing “grain” production with “green” forest cover. It was trialled in three provinces in 1999 and rolled out to 23 more provinces in 2000. Both programmes are currently ongoing and expected to last until at least 2020. Notably, both have a clear emphasis on the key ecosystem services provided by forest ecosystems.
This recent boost of state sponsorship for reforestation coincided with profound changes in rural China. Mass emigration to urban areas reduced the availability of rural labour, while remittance from urban or other non-farm jobs accounted for an increasing proportion of rural income. The demographic and economic changes across rural China are palpable, and among them is the increasing tendency of rural households to shift land use away from crop production, or any kind of production altogether. Tree stands or forests, requiring far less labour to manage than food crops, have come to be an appealing land use option. Recent reforestation in China has thus taken place under a highly favourable socio-economic context.
The combination of strong state sponsorship and conducive socio-economic context has afforded China’s recent reforestation efforts sizeable success, at least as measured by the land area reforested. State Forestry Administration (SFA) reports that 84 million hectares of land in China were reforested* between 1999-2013—an area slightly larger than Sweden and Japan combined. Independent remote-sensing studies show that China’s forest cover increased from 2000 to 2013, mostly in regions under reforestation programs. * 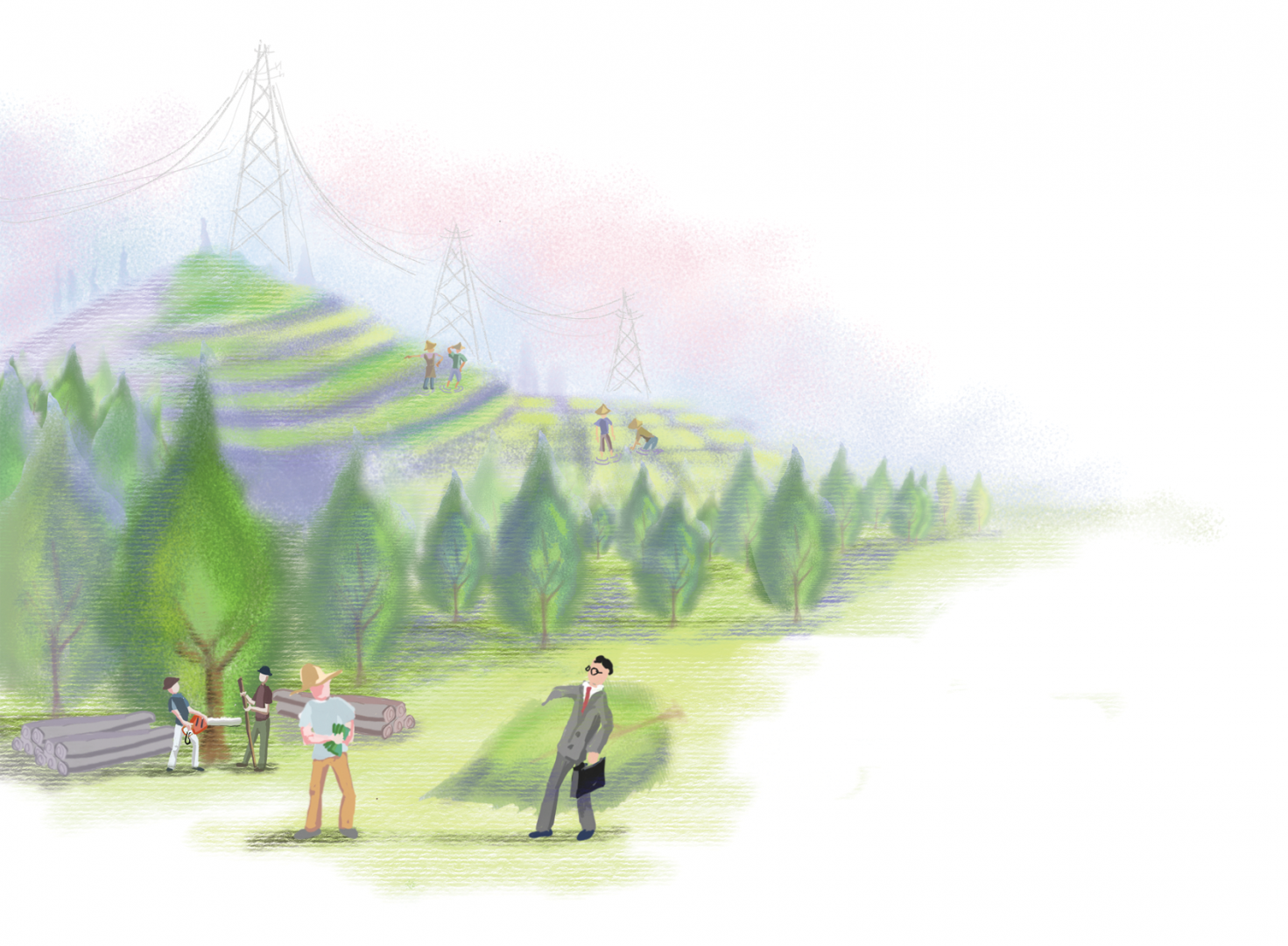 Despite China’s forest cover increase, it is important to note that these “new forests” seem to mostly comprise very few tree species on the stand level, and thus do little to restore China’s beleaguered native forests. As an extensive literature review shows, individual stands of the “new forests” re-established under the GFGP mostly comprise fewer than five tree species. Worse still, with the term “forest” encompassing a wide range of tree stand types, the emphasis on simple “forest cover” as the measure of reforestation success may effectively have displaced the remaining native forests by favouring production-oriented plantations (the term “plantation” in this article refers to tree stands comprising a small number of tree species). This latter concern was corroborated by a recent study in tropical Hainan Province: in the era of reforestation, Hainan’s native forest cover continued to decline despite an overall increase in total forest cover.
Why do these issues matter? The short answer is that native forests and plantations have major differences in the ecological functions they perform and ecosystem services they provide. Among these functions and services, perhaps none illustrates the differences more plainly than biodiversity: across the world’s ecosystems, native forests harbour far more species and sustain higher abundances of these species than plantations, almost without exception. More biodiverse and ecologically robust native forests also offer perhaps the best chance for the resilience and adaptation of forest ecosystems under climate change. For example, native forests are likely to be indispensable “stepping stones” or outright future habitats for forest-dependent species as they shift distribution ranges in response to climate change. For reforestation to restore not native forests but plantations thus foregoes the attainable environmental benefits – derived from ecological functions and services – that native forests have over and above plantations.
Ultimately, the environmental argument behind virtually all reforestation programs should be about the environmental benefits provided by forests, not forest cover per se. The design and evaluation of reforestation programs therefore must go beyond the simple metric of forest cover to directly measure the environmental benefits delivered by the “new forests”. Furthermore, it is imperative to make native forests the reference ecosystem against which the environmental benefits of these “new forests” are compared. With this vision in mind, knowledge on three issues is needed to understand the environmental implications of reforestation, and how it can be guided to deliver better environmental outcomes. First, how much forest of different types has been re-established and what land cover did it replace? Second, how do the ecological functions and services of these forest types compare with those of the land cover they replaced and with native forests? Third, what drives the choice of different forest types under reforestation? Central to these inquiries is the distinction of different types of forests involved in reforestation, in terms of plant (mostly tree) species composition.
Over the past four years, my colleagues and I asked this very set of questions with a focus on a region in Southwest China that has undergone substantial reforestation under the NFPP and GFGP. The area of roughly 16,000-km2 lies within Sichuan, the province best known for harbouring ~75% of the extant wild population of the giant panda (Ailuropoda melanoleuca). It was historically forested but suffered extensive deforestation throughout its >2,000 years of human settlement. SFA statistics for the region suggest that, between 2000 and 2015, the NFPP and GFGP have curbed forest loss and contributed to substantial reforestation, but anecdotal evidence also suggests considerable loss of native forests in the region.
The approach our team used was a combination of satellite imagery analysis of land cover and fieldwork that included ecological surveys and household interviews. We analysed satellite images to understand how the region’s land cover changed between 2000 and 2015, in particular distinguishing among forest types in terms of tree species composition. This analysis, however, cannot assess the land cover change specifically attributable to NFPP or GFGP. We conducted ecological surveys focusing on birds and bees to understand the consequences of such land cover change for biodiversity, the aspect of ecological functions and services that arguably best reflects the ecological distinction between native forests and plantations, yet has been severely neglected in studies thus far on reforestation in China (Hua et al. 2016). Finally, we conducted interviews of rural households to understand the reasons behind their choice of forest types under the GFGP, the single most influential reforestation scheme for this region over the study period.

In a nutshell, our findings are as follows:
• All types of forests combined, the region’s forest cover increased by 32%. However, this increase was entirely accounted for by the conversion of croplands to plantations, particularly monocultures, while native forests suffered a net loss. Interviews of rural households also revealed that the GFGP in the region has overwhelmingly resulted in monoculture and mixed plantations. In other words, in the study region, reforestation has displaced native forests including those that could have regenerated on land freed up from agriculture.
• Plantation-style reforestation on croplands resulted in modest gains (via mixed plantations) and losses (via monocultures) of bird diversity and major losses of bee diversity. No plantations, however, restored biodiversity to levels approximating native forests. Thus, the region’s reforestation has led to mixed results for biodiversity, and has considerable potential for biodiversity gains if it were to restore native forests rather than plantations.
• Households’ choices of forest types under the GFGP were most strongly driven by two factors: their pursuit of higher profits from forestry production, and the encouragement of local governments to establish certain forest types.
Households also tended to follow the forest type choices of their neighbours, reflecting the influence of social norms in the region’s reforestation dynamics. 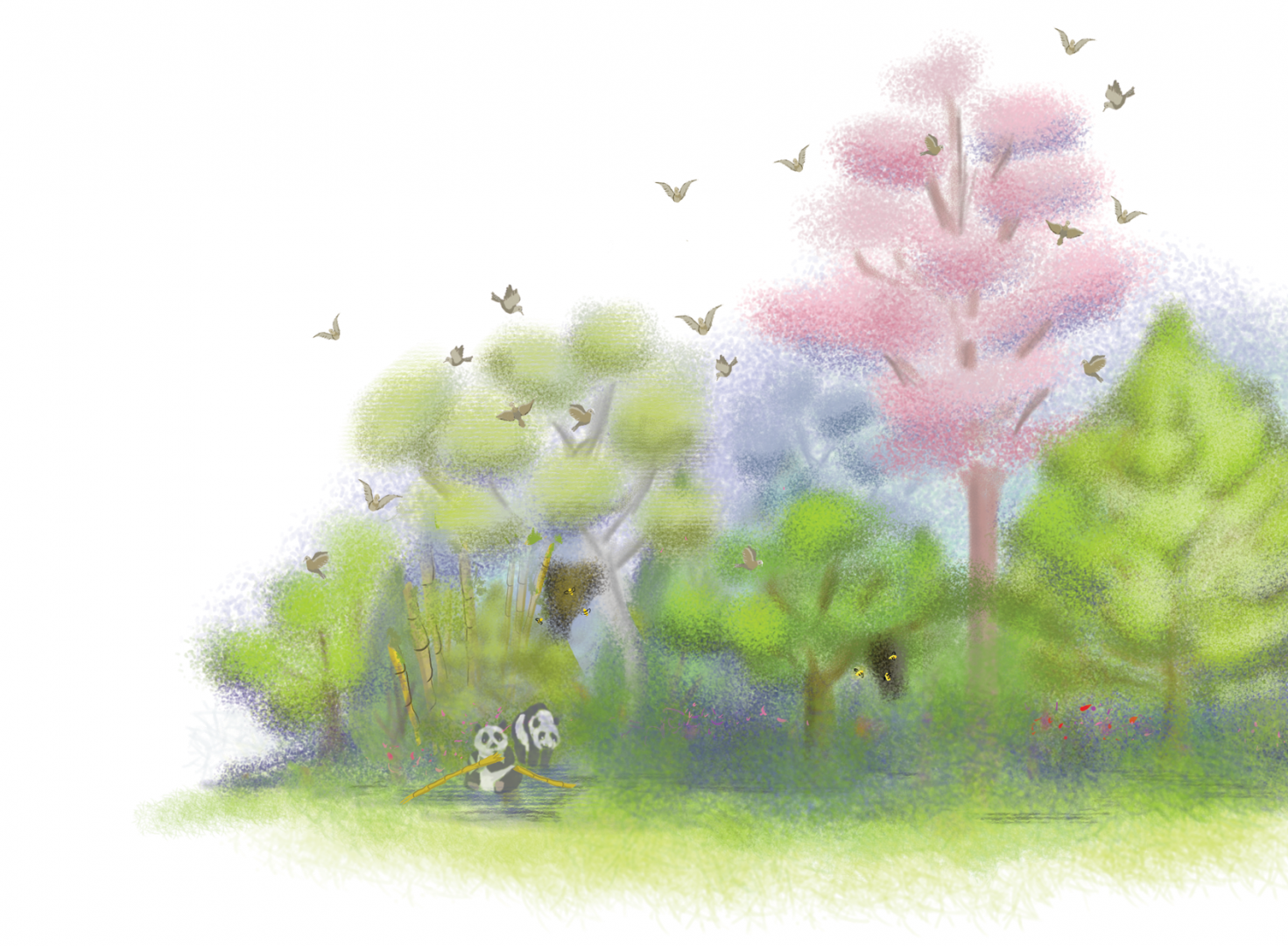 These findings provide a number of policy insights on the design and implementation of reforestation programs for better environmental gains in the region. For one thing, with its strong influence on the outcome of the region’s reforestation, government policies and reforestation programs in particular should pay serious attention to safeguarding existing native forests and facilitating native forest restoration. They should discontinue providing perverse incentives for plantations to displace native forests. Additionally, non-policy factors operating on the household level, notably households’ strong emphasis on profitability and their desire to conform to social norms in reforestation decision-making, should be harnessed to facilitate better reforestation outcomes. The former factor highlights the necessity and potential utility of proper, socially-equitable compensation for foregone opportunity costs to obtain the support of households. The latter indicates scope for facilitating behavioural changes through avenues such as social marketing.
It is important to note two boundaries to the above policy recommendations. First, they apply to places and situations where native forests warrant restoration. Because the production of timber and non-timber products is among forests’ key functions and services, production plantations are often legitimate, oftentimes necessary, components of the forest landscape for any geographical region of interest see Paquette and Messier 2010 for a review on this topic. This is particularly so when plantations’ high production efficiencies enable native forests to be “spared” for conservation, and, in turn, yield better overall outcomes for both production and environmental goals. Science-informed planning should inform where to allocate land, and how much space to set aside, for native forests versus plantations. Second, the above policy recommendations may no longer apply when the geographical scope of consideration expands to regions outside of our focal region. As a poignant example, there are wide concerns and indications that the NFPP, by banning logging and considerably reducing domestic timber production in China, most likely fuelled deforestation in other countries from which China imported timber, including a number of tropical countries with arguably higher biodiversity and other environmental stakes. Knowledge of the true environmental implications of a reforestation programme or an environmental intervention at large, and how it should be steered for best environmental outcomes, therefore, would remain incomplete until these “leakage” effects are accounted for. How to assess such leakage effects is a research frontier in environmental sciences that is more urgent than ever, as countries and regions become increasingly interconnected through a vast trade network. 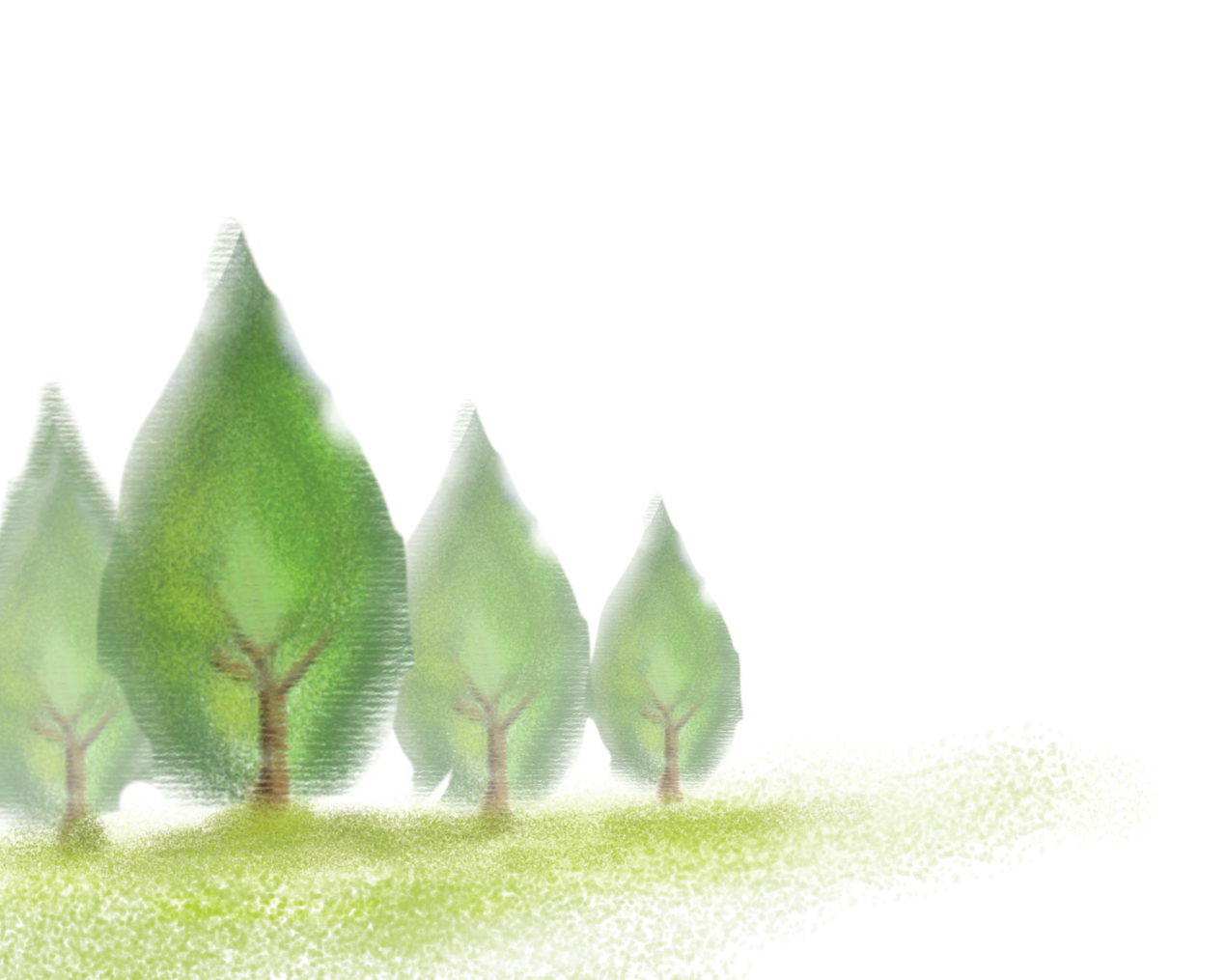 Worldwide, reforestation is assuming an increasingly important role in meeting the environmental and livelihood challenges of forest loss and climate change, and is rapidly garnering sizeable political will and financial investment. Experiences and lessons that China has gained with regard to the design and implementation of reforestation can provide relevant insights for other countries as they undertake reforestation efforts and grapple with similar challenges – and opportunities – associated with the recovery of their native forests.

Dr. Fangyuan Hua is a conservation ecologist with a research focus on understanding and conserving forest biodiversity. She is currently a Newton International Fellow of the British Royal Society, based at the University of Cambridge.
Megha Vishwanath freelances as an illustrator with a special interest in comics, children’s books and conservation. Until recently, she has been consulting in technology for Bangalore based non profits in public education. www.moonlitnook.com