Revealing the world of the tiger 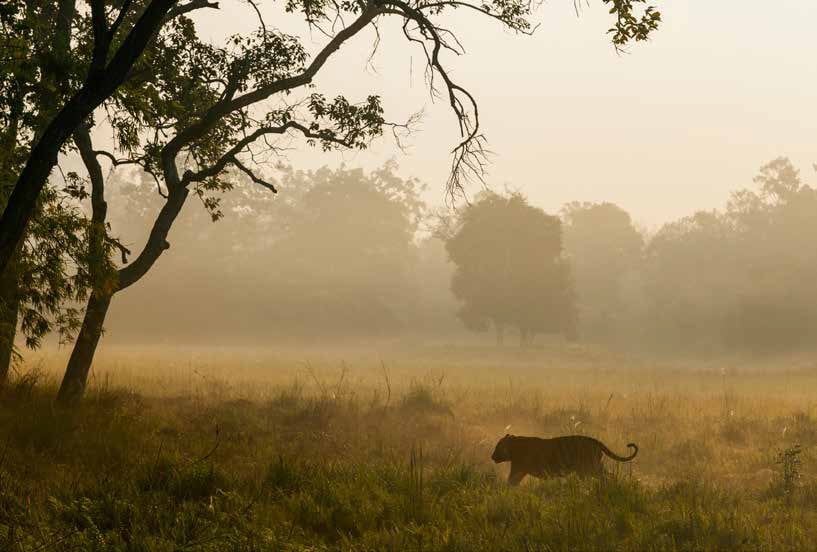 “Panthera tigris, the largest of the world’s cats, is the heart and soul of Asia’s jungles. It’s the dominant predator in both the valley and every ecosystem it inhabits, stealthy, walking silent and unseen, like a shadow, but possessing fearsome teeth and claws and a roar that resounds for miles. It’s no wonder tigers have long been feared and worshipped across their range. For millennia, they’ve stood as iconic symbols of power and courage, woven into culture, religion, folklore, and ritual.” 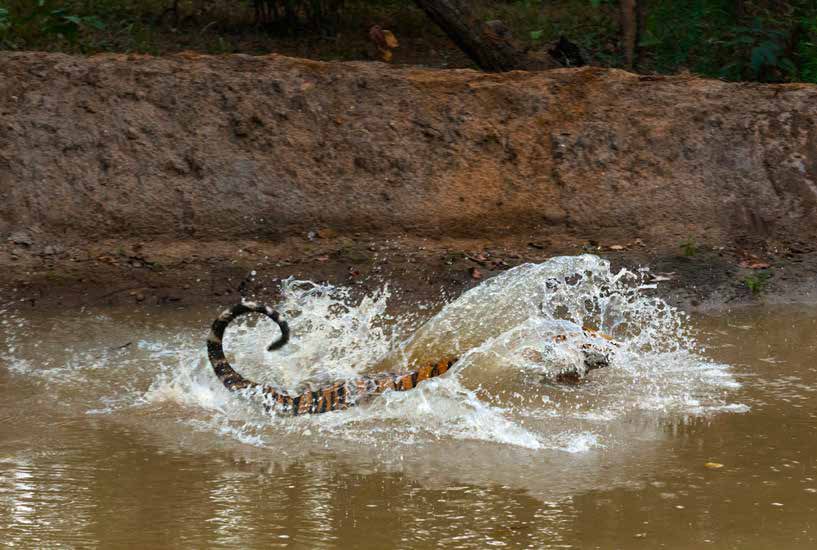 “One of the two male cubs finally lifted his head, yawned, and ambled off into a meadow. His siblings stretched and followed. The female circled around, crouched behind some underbrush, and then sprang on her brother. One cat tore off, another racing behind, running along a berm above the pond. They dove in, water f lying, chasing, rearing up on their hind legs, sparring. Back in the clearing, their brother leaped at them from a tree. They frolicked and pounced and played like couple-hundred-pound kittens for an hour and a half, then disappeared into a bamboo grove.” 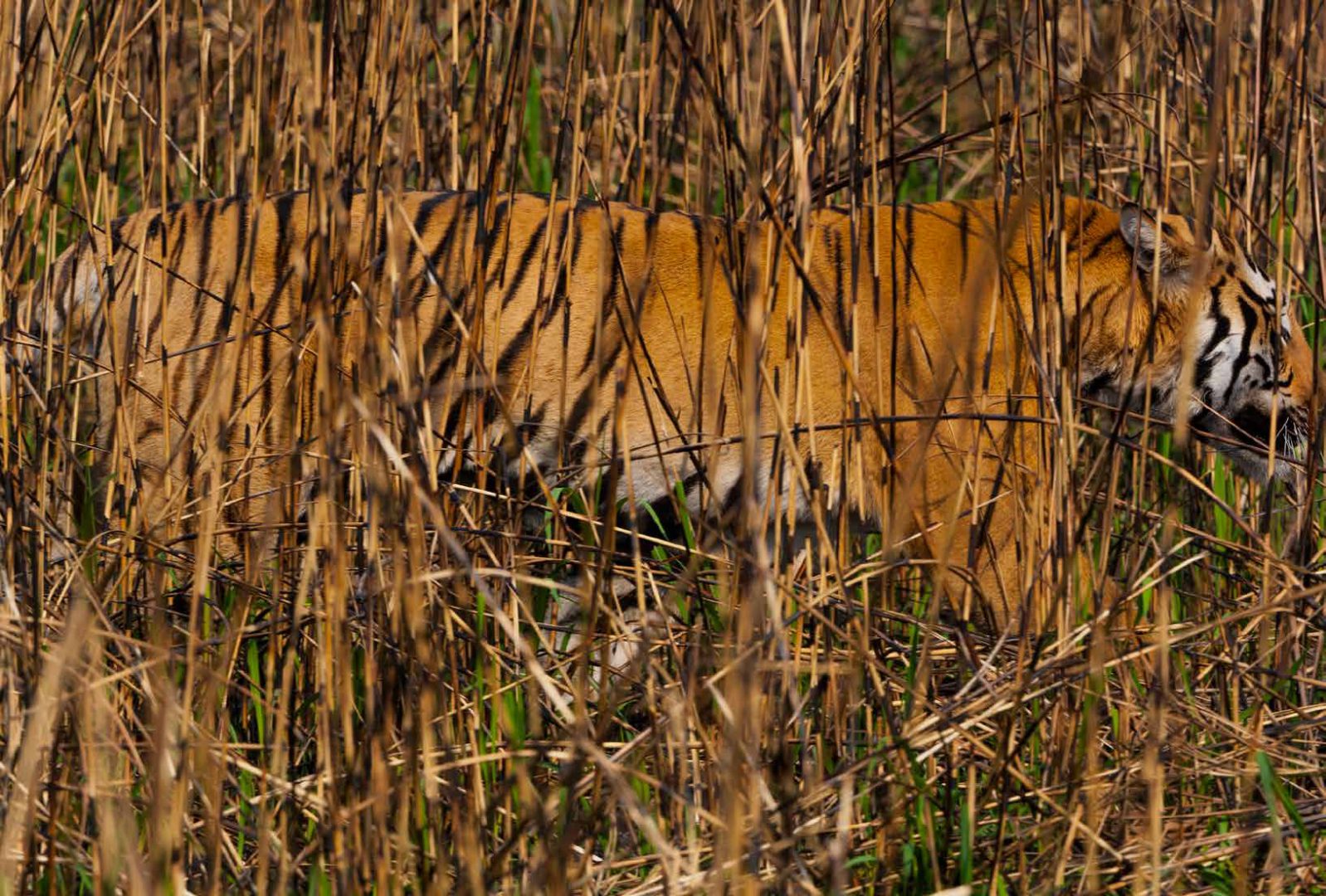 …Konwar rounded a bend, stopped short, and killed the engine. He whispered, ‘bagh,’ Assamese for tiger. A big male lay in the road sleeping. Just beyond, 28 elephants munched away in a field of shiny, palm-leafed rattan. Three times, when the cat slipped into the grass, the herd quickly formed a protective circle around the calves, his target. The matriarch charged, trumpeting, and he returned to the road, napping until his next halfhearted attempt. It was my first real opportunity to watch a tiger up close, to really see the intricate markings on his face, his mammoth paws, his golden eyes, the reddish amber sheen of his coat, slashed by random stripes. Two hours later, he gave up. As he walked away, I photographed him, those stripes melting into the landscape, perfectly camouflaged in the elephant grass. 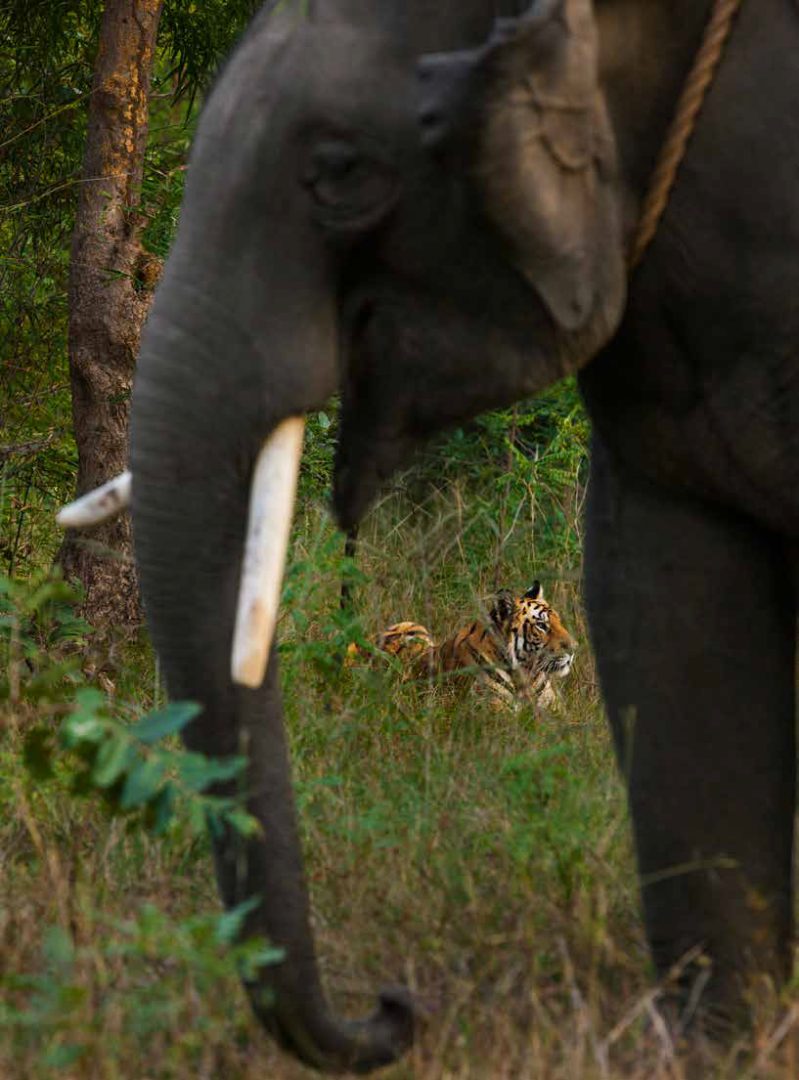 “Only about 3,200 wild tigers survive, and of those, less than a third are breeding females. They’re gone from 93 percent of their historic range; that range shrank by almost half during the first decade of this century. Tigers hang on in just 13 countries in scraps of habitat sandwiched amid an exploding human population. In 2010, they were declared extinct in Cambodia. (In contrast, at least 4,000 captive tigers are privately owned in the United States alone, living in people’s backyards, lost to the wild and often living miserable, caged lives.)” 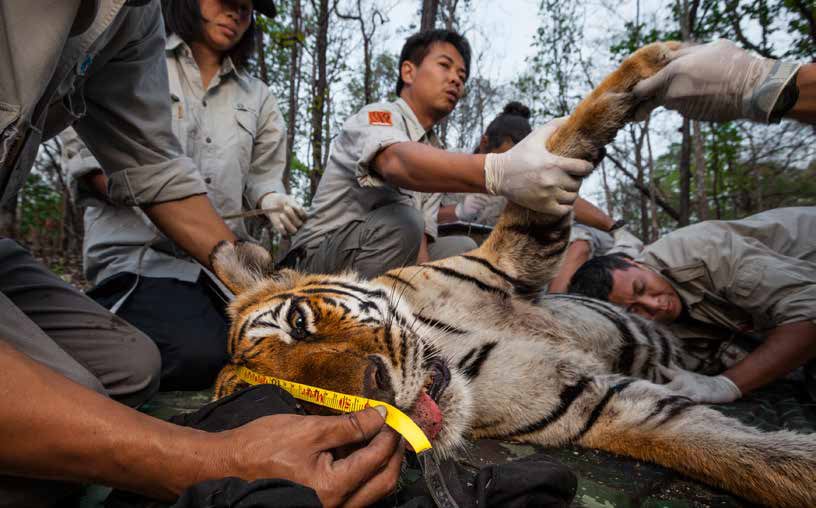 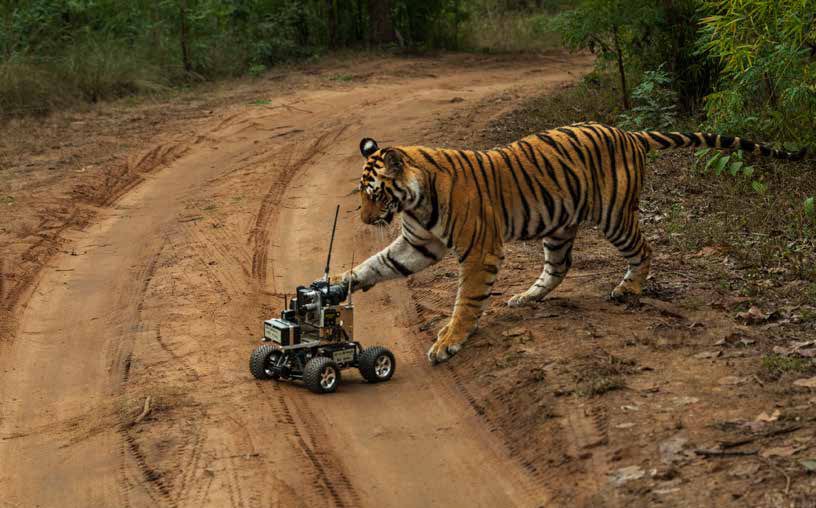 “Rigging up a camera trap takes hours. I place a camera and three flashes inside waterproof cases and then secure them to trees or posts that we pound into the ground. Here, we tried to position them where they wouldn’t be kicked by rhinos or where elephants wouldn’t rip them apart with their trunks. Then we wired it all to a TrailMaster transmitter and receiver and camouflaged the equipment with foliage. Any movement that broke the transmitter’s infrared beam fired the camera and the flashes. Tigers are difficult to find in that landscape, but we found signs everywhere. We saw long scrapes on the ground and deep scratches etched into trees. Some areas were thick with their musky scent. These calling cards help the solitary cats find a mate, advertise their presence, and mark territory. It’s a way to avoid surprise encounters that could prove fatal. Their markings also pointed out prime spots for me to set up remote cameras: trails, rocks, caves, or trees that I hoped the cats would return to. Sometimes they did.”

The photographs and excerpts are from the book “Tigers Forever” by Steve Winter, a photojournalist at the National Geographic Magazine and Sharon Guynup, a freelance journalist, sharonguynup@me.com.