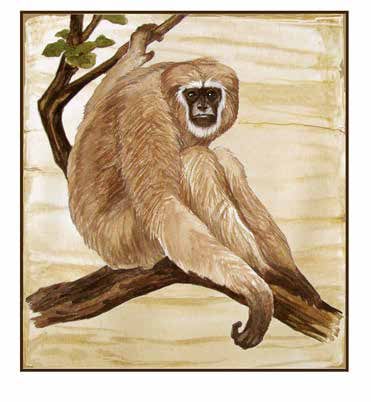 Robert Armitage Sterndale was a British naturalist, statesman and Fellow of the Zoological Society of London. He moved to India at the age of seventeen to work for the East India Company. His administrative duties aside, Sterndale took a keen interest in natural history, geography and other scientific studies. He was an avid naturalist and writer, and published a number of books based on his experiences and observations of wildlife in India. His writings include Natural History of the Mammalia of India and Ceylon, Seonee, or Camp Life on the Satpura Range and Denizens of the Jungles, the last a series of sketches illustrating wild animals, their forms, behaviour and natural attitude.

Sterndale was a close observer of animal behaviour and made detailed notes on captive animals such as chevrotains, gibbons and cheetahs often kept at his home. He observed for instance that gibbons were largely docile and capable of great attachment in captivity and that young cheetahs were not as consistent in chases as adults. Such information was often taken seriously leading to several Indian Princes capturing adult cheetahs to tame for hunts. Sterndale’s writings also influenced several naturalists and writers in India at that time. For instance his work, Seonee, or Camp Life on the Satpura Range published in 1877 set in the Seonee district of Madhya Pradesh, was the inspiration for Rudyard Kipling’s Jungle Book. Seonee documents the wildlife of the Satpura Range and describes Sterndale’s adventures and experiences with the wildlife and the local inhabitants of the landscape. He also provided a topographical and historical sketch of the Seonee district, which helped Kipling create the setting for the Jungle Book in a place Kipling had never seen.

Deepthi Chimalakonda is a research assistant at the Ecological Modelling and Economics Lab, National University of Singapore, Singapore, diptibharadwaj.l@gmail.com.