Sacred trees in the urban landscape of Bangalore, India 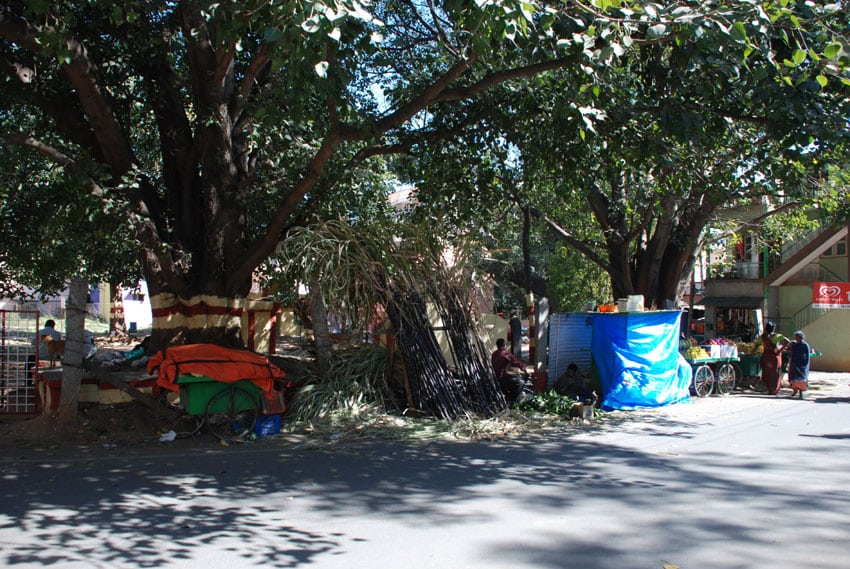 Sacred ecosystems across India are immensely valued and protected resources. Deeply etched in the cultural and spiritual realm of the society, sacred sites have been found to contribute to biodiversity conservation and generation of ecosystem services. In the urban context, such cultural protection of biodiversity has been less acknowledged and recognised. This is in spite of the fact that urban green spaces are under strong pressure while still representing important values for the physical as well as psychological well-being of urban residents.

In cities like Bangalore in southern India, sacred sites act as pockets of greenery in a highly fragmented urban landscape. Bangalore is a rapidly growing metropolitan area which was once famed as ‘Garden city,’ characterised by its charming tree-lined avenues and bounty of parks. Although trees and green spaces in Bangalore are protected under the Karnataka Preservation of Trees Act (1976), the city has witnessed indiscriminate felling of trees in recent years, to accommodate large scale infrastructure development projects. Yet, sacred ecosystems/sites in the city, so far, seem to show great resistance to the pressures of urbanisation and have survived such rampant incidents of urban deforestation. While passing through the city, one witnesses many instances of sacred trees protruding into well paved streets. It may seem odd to a passerby to see a tree or group of trees intruding into the streets. However, these are simply examples of avenues that have been widened to accommodate more traffic and in the process, lost most of their tree cover except the sacred ones. 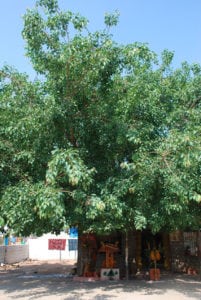 An Ashwath Katte with sacred symbols and idols of gods

Sacred trees in Bangalore provide excellent examples of culturally protected ecosystems. In Bangalore, sacred ecosystems can be comprised of trees within a temple site, a heritage site referred to as Ashwath Katte or even randomly occurring single trees or group of trees. Temple sites may have sacred tree species as described in holy texts, and ornamental species and fruiting trees that are used in ceremonies. The Ashwath Katte is an area with a slightly raised platform, generally with sacred fig (Ficus religiosa) and neem tree (Azadirachta indica) planted together under which one often finds idols of serpent gods. Other sacred species, specifically the Ficus species, may also be found in a Katte. Single sacred trees or a group of sacred trees may be growing on streets, within parks, commercial areas or residential areas that are worshipped by the locals and generally adorned with holy symbols. Sacred figs, neem, coconut trees (Cocos nucifera), banyan (Ficus benghalensis), Indian blackberry (Syzygium cumini), Banni (Prosopis cineraria) and Bael (Aegle marmelos) are a few common sacred tree species found in Bangalore. There are also examples of culturally protected trees at Christian, Muslim and Buddhist sites of worship, for example the tree cover on burial sites and mango trees (Mangifera indica).

The old city centre of Bangalore—Pete—tells a fascinating story that portrays the resistance capacity of sacred ecosystems. Established in the 16th century, it is an intrinsic part of the historic and cultural identity of the city with a mud fort and mote around it. Pete remains an important commercial centre since when it was first built, which is interlaid with residential layouts. With the city having grown enormously over the centuries, in the present day, Pete comes across as an extremely congested area, still home to many city residents. It has undergone many changes over the centuries due to various political turmoils, including social, economic and geographic changes. In a sample survey conducted to map the tree cover in Pete, we found that the remnants of tree cover in the sampled plot were mainly sacred. The scattered sacred trees were predominantly sacred figs (Ficus religiosa), that form tiny islands of greenery in the highly built up environment. 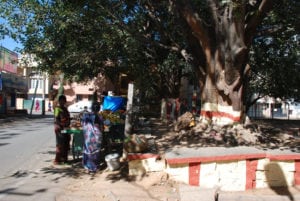 Slum dwellers selling vegetables and fruits under the canopy of an Ashwath Katte comprised of Ficus religiosa and Ficus benghalensis.

Sacred figs are tall trees with huge trunk areas and large canopies. While saplings of other species do not survive the pressures of urbanisation with the landscape being highly managed, sacred figs are commonly noticed growing in crevices of buildings, abandoned land, etc. The saplings of sacred figs are successful in establishing themselves in disturbed places and are one of the few spontaneously growing species in the citiscape. They are native to the region with many medicinal properties and are actively used in traditional medicine. By and large, fig trees are known to be biodiversity hotspots that nurture the urban wildlife including insects, birds and mammals such as squirrels, bats and monkeys.

In slum settlements of Bangalore, sacred figs came across as hotspots of social activities, in addition to being worshipped. Slum dwellers were often seen to be gathering and conversing under the canopy of sacred figs and even carrying out livelihood activities such selling flowers, fruits and vegetables. The multifunctional nature of sacred sites in slums was further evident when Ashwath Kattes were used as play grounds by children. Tree canopies provide much needed shade from the harsh solar radiations in Bangalore. In slums, due to severe space constraints, most trees encountered were small or medium sized. The large sized trees with huge canopies were predominantly sacred belonging mainly to the Ficus genera, providing an excellent platform for social activities.

The sacred fig is believed to represent fertility and rightly so, considering the large amount of fruits it produces which are much sought after by urban wildlife. In fact, the Ashwath Katte represents the marriage between the sacred fig and the neem tree. There are various beliefs on the significance of marrying the two trees. One such belief is that the male god resides in the sacred fig and the female in the neem—symbolising fertility, therefore, the marriage between the two. During Hindu wedding ceremonies in certain South Indian communities, the bride worships the two trees and circumambulates the Ashwath Katte with the belief that she becomes as fertile as the sacred fig to bear offspring. 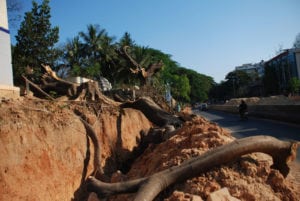 Many trees along K.R. Road in Bangalore were axed to make way for an underpass construction and wider road.

Similar to the sacred fig, most other sacred tree species are native to the region and used in traditional medicine. The neem, Banni and Bael are medium sized trees with small or medium sized canopies. In popular culture, the leaves of the neem tree are often used to adorn doors on festivals. During Ugadi, the New Year’s Day in Karnataka and some other southern Indian states, neem leaves (bitter to taste) are consumed with jaggery (sweet to taste) to welcome the New Year wholeheartedly—accepting both bitter-sweet experiences that it may bring along. The healing properties of neem are widely recognised by people. In Bangalore, many residents are often seen consuming neem leaves early in the morning as part of daily health upkeep. In and around a few parks of Bangalore, juice vendors are frequently spotted in the morning, selling various herbal drinks, including fresh neem juice. The banyan tree, on the other hand, is a huge-trunked tree with dense canopy and areal roots. It is the national tree of India and often considered a heritage tree. Within the Bangalore urban district, is one such 400 year old individual called the Big Banyan Tree—a heritage tree that also attracts tourists. Children are commonly seen playing with the areal roots of banyan trees across the city. In general, sacred trees are intertwined with the social, cultural and economic elements of the society.

The most impressive features associated with sacred sites in Bangalore are those of care and continuity. Devotees and other residents of the locality were often seen to be nurturing and protecting sacred trees. These trends are not limited to species described in sacred texts, but include trees worshipped due to personal beliefs. Further, upon death of a sacred tree, a sapling belonging to the same species is planted and nurtured in the site. 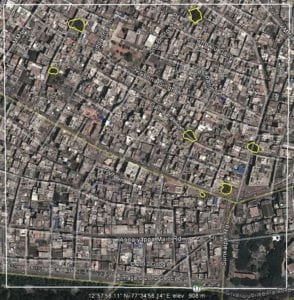 Google Earth image of the Pete area of Bangalore that shows the canopies of sacred trees, demarcated in yellow.

Such practices may not be striking enough to the outside observer, but, when seen in relationship to the rapid loss of trees in Bangalore and the planting patterns of the city authorities, their real significance appears. Although the city authorities engage in greening projects, the choice of species planted are of a different kind. The city authorities have a preference towards ornamental and exotic species with small canopies including the Indian mast tree (Polyalthia longifolia) and the royal palm (Roystonea regia) that fail to perform the important social and ecological roles of native and large canopied trees. Furthermore, the saplings planted by the municipality often lack proper care and may not grow into sturdy trees, in contrast to culturally important species that are actively nurtured by local residents.

Active citizens and environmental groups have often come together to protest against the large scale deforestation of Bangalore. While protests have been successful in some locations, yet, the denudation of the city’s tree cover continues. Urban development seems to be the primary agenda of the city authorities. However, sacred trees, heritage trees and other culturally protected trees have so far portrayed resistance against the pressures of urbanisation. Cultural ecosystems across the world are some of the best protected areas, securing biodiversity values as well as spiritual and other cultural values for humans. To secure pockets of nature in rapidly developing cities, there is great potential in better recognition of the values and practices by urban residents that protect and nurture trees and other ecosystems. There are lessons to be learned for how to design parks and green spaces that engage people in their protection and management, as well as for maintaining a green infrastructure of trees, parks, and other green spaces, that sustains human wellbeing in the city.

Maria Tengö is a researcher at Stockholm Resilience Centre and co-theme leader of the Stewardship theme, maria.tengo@su.se.

Divya Gopal is a researcher at the Institute ofEcology, Technische Universität, Berlin.