Sailing into an Uncertain Future 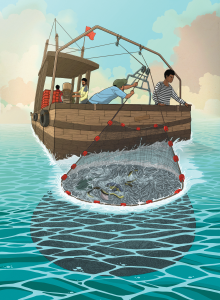 This is a story about trawl-fishing, about the lives of the people who depend on this dying industry and the reasons for its inevitable demise. Ultimately, it seems likely that the industry is destined for collapse, doomed by its own brutal efficiency. But what does this mean for individual fishers? How are we preparing for a time when trawl-fishing is no longer able to provide jobs to the millions that have depended upon it for decades and what is the future for those people?

Left anchorage at 6 a.m., the crew still brushing their teeth. A full moon casts a yellow light over calm waters. The sun will not rise for another hour. The Indian fishing town of Malvan recedes into the darkness.

Around the globe, mechanised trawler-boats have become one of the mainstays of commercial fishing. Although they vary massively in scale, the principle is the same – a net is cast from the back of a motorised vessel and towed for a number of hours. Sometimes the net is dragged along the sea-floor, sometimes it hangs midway in the water column. In either case, whatever marine life is in the net’s path, it is caught up and mechanical winches then haul it aboard the boat.

Once in deeper waters, winches begin whirring, ropes begin to play out and the net is cast for the first time of the day…

Trawling is a hugely effective way of extracting marine resources with a high market value. However, the problem lies in its indiscriminate nature. A whole suite of organisms that are not targeted or commercially valuable end up in trawl nets. These range from juvenile fish to sea turtles to sea snakes.

These two factors—the large number of boats operating throughout the tropics and the broad range of species which are caught—have set in motion a chain of events which are having severe consequences, both for marine ecosystems and fisher communities.

First, due to the effectiveness of the technique, trawling has been one of the factors which  has caused dramatic declines in stocks of highly prized commercial species such as anchoveta (Engraulis ringens) in Peru and other South American countries, and prawn stocks in Southeast Asia and Australia. Some fisheries experts say that because stocks of target species are in such a depleted state, there are now none which can be ‘sustainably’ harvested. There are just those for which harvesting is slightly less unsustainable than others.

The next link in the chain is the commercialisation of by-catch. By-catch is all the sea-life which was not being targeted, but which was caught incidentally due to the non-selectivity of the   trawl nets. By-catch is estimated to account for around 40% of the global marine catch and has traditionally had little market value. In the past, therefore, much of it was thrown back into the sea. Now however, as stocks of target species decline, fishers are forced to commercialise more of this by-catch to maintain income-levels.

…and in the two hours in which the net will be pulled through the water, there is time to speak with the crew. Deepak is young – he can be no more than 22. His arms are strong and on one arm is a heart tattoo, with the initials of a past girlfriend. When asked about it, he smiles bashfully. Anil meanwhile has been working on fishing boats since he was 14 or 15. Now 46, he is one of the most experienced members of the crew. Direct and straightforward, Anil answers questions in the same way that he and his crew-mates complete all tasks aboard the boat – briskly. Here in Malvan he earns about Rs100 a day (less than 1 ½ USD). With this money he supports his family at home in Karwar, Karnataka: his wife, son and two daughters, the eldest of whom is in her second year at university. The crew takes shore leave on rotation and having just returned, Anil will now not see his family for four to five months. By working on a trawler, Anil is able to provide his family with comparative financial security. It is true that were he to get injured, there is no health insurance on these boats and the owner would provide no financial assistance with medical costs. He previously worked on a small-scale gill-net vessel, a way of life which neither required such long spells at sea, nor so much time away from his family, but which compelled a more-or-less hand-to-mouth existence. Now on the trawler he has a reliable income and earns enough to make life more comfortable for his family. He does not have a passion for the ocean, or for this way of life – it is simply a job. But it is one that he and his family depend on for their health and livelihood.

At8.30a.m.the net is winched in.By8.50a.m.the catch has been landed on to the boat and an hour and a half later it has been sorted, the target and trash-fish boxed, the discards thrown overboard. Sorting is done by hand with dust-pans and plastic scrapers. Venomous sea snakes are buried amidst the squirming, salt pile.Bites are not uncommon.

10.30 a.m.–breakfast.Fishcurryandrice, cooked below deck at the prow, by the ship-cookShivram.

The net was re-cast for a second trawl almost as soon as the first was hauled up – there will be four today. Despite the aid of mechanised winches, the physical exertion required by the crew is immense. As is the potential danger. Men run along the gunwales as the small boat pitches, wheels spin, cranks pull and taut metal lines thrum and strain. Although regularly maintained, the machinery is decades old and rutted with rust. Not one of the fishers is without scars.

As a testament to the ingenuity of the fishing economy, a number of markets have been established for by-catch which previously had no commercial value. Some is sold for food, with re-branding or euphemistic names used to entice customers, such as crab cake, or the better known fish oils and other dietary supplements. Most, however, is dried, ground down into powder and made into fishmeal. This is then used in animal feeds (ironically this includes food for fish farms, which have been proposed as one solution to overfishing) and fertilisers.

12.30 p.m. – lunch. Fried fish and rice. After the meal everyone does their own washing up, including the Captain, Yeshwant. He chews a mouthful of saunf (fennel seeds) and the cabin is filled with the sweet smell. 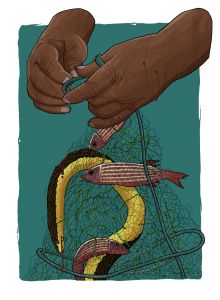 At 8.30 a.m. the net is winched in. By 8.50 a.m. the catch has been landed onto the boat and an hour and a half later it has been sorted, thetarget and trash-fish boxed, the discards thrown overboard. Sorting is done by hand with dust-pans and plastic scrapers. Venomous sea snakes are buried amidst the squirming, salty pile. Bites are notuncommon.

But as with stocks of commercial species, it seems inevitable that the fishing industry’s strategy of diversification, known as “fishing down the food web” , cannot be sustained in the long-term. More data is needed to be certain, but since overexploitation has dramatically reduced stocks of commercially important fish such as tuna and anchoveta, it seems highly likely that the new reliance on alternative species will, in turn, denude stocks of these forms of sea-life.

The last haul of the day is negligible – disappointed and late we turn for shore, heading almost due North on an easterly bearing73°27.015’E.Drop anchor at 5.30 p.m.The impact of the relentlessly throbbing engine on our eardrums only becomes clear when it stops at last.A hollow space is left behind.Thecrewloadasmallrow-boat and ferry the catch to the market on the beach.

A working day of over 12 hours. The crew does not get weekends.

And where this chain ends, it seems, must be the collapse of the trawl-fishing industry. Marine- life simply does not have the capacity to reproduce at a rate that will keep pace with the rate of extraction, and so the biodiversity of our oceans will reach such a depleted state that no large scale fishing will be economically viable. It is true that there are global efforts to reduce the ecological impacts of fishing. However, there is an enormous gulf between allowing marine ecosystems to slowly recover, and bringing them back to a point where they can once again be harvested on a commercial scale. 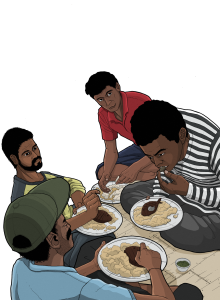 And so, it seems that the sad but inevitable truth is that in many ways, trawler fishing can already be seen to be dead in the water – it is only a matter of time before it sinks completely.  Stocks of target species are already barely commercially viable. The fishmeal industry is no more sustainable in the long term. On the one hand it is difficult to have sympathy for an industry which has literally destroyed its own foundations by overexploiting the resource on which it depends. On the other however, to view the issue from this broad scale misses the finer detail. It misses the impacts on the lives of individual fishers like Anil, Deepak and their crew-mates – Yeshwant the captain and Shrivam the cook, Pintya, Lankesh, Subodh and Keshav; the impacts on the thousand such ‘thalashis’ at Malvan, and the millions more around India’s coastline.

The challenge now is finding a brighter future, for both the myriad life-forms that live in our seas, and also the approximately 40 million people that depend on those seas for their livelihoods. With the demise of the industry these people will find themselves with no means to support themselves and their families. And so it is vital that although the industry will die out—be it over the next 10, 20 or even 50 years—we do not allow its fishers to sail into the abyss with it.

FAO. 2018. The State of World Fisheries and Aquaculture 2018 – Meeting the Sustainable Development Goals. THE STATE OF THE WORLD Series of the Food and Agriculture Organization of the United Nations. Vol. 35. https://doi.org/ issn 10.

Matthew Creasey is a biologist and science writer. He currently works for the wildlife conservation charity WildTeam.

Shawn Dsouza is a researcher at Dakshin Foundation with interest ranging from marine ecology to marine resource management.

Adwait Pawar is an illustrator based in Bangalore who lives with his three cats and aspires to their  sense of detachment. He has been experimenting with different styles of illustration recently and is quite enjoying himself.