Snapping, Symbiosis, and Sociality in the Sea

One of the most ubiquitous sounds that that snorkelers or scuba divers hear when visiting a coral reef is a subtle ambient soundtrack of snapping, crackling, and popping. Most visitors are surprised to learn that these sounds have a biological basis: they are made by  thousands  of snapping shrimps, living in the coral matrix. Snapping shrimp (Alpheus and Synalpheus) are one of the most abundant and diverse inhabitants of coral reef communities. Systematic surveys of coral reef diversity indicate that  these  shrimps  constitute  a  significant proportion of what is known as the “cryptofauna”—small animals, both mobile and sessile, that live in the coral reef matrix or in symbiosis with other coral reef organisms. The din of snapping shrimps is so pervasive that one species was even named after the legendary band Pink Floyd (Synalpheus pinkfloydi). 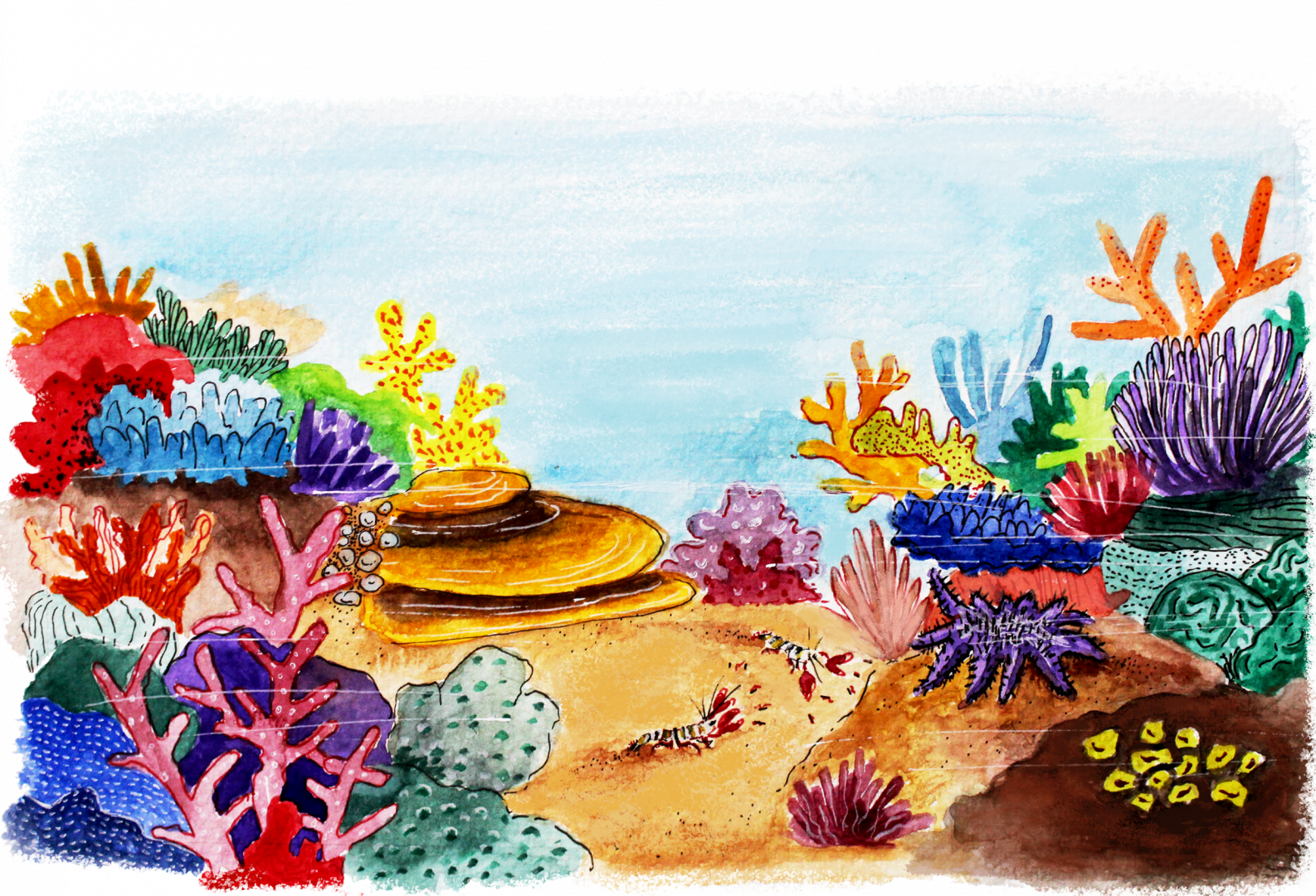 The snap that gives these shrimp their name is produced by an asymmetrically enlarged claw, armed with a complex snapping mechanism. Although it was thought for years that the sound was produced by the two fingers of the claw striking together, studies utilizing high-speed video indicated that the snap comes milliseconds after the closing of the claw, and is produced by the violent implosion of a cavitation bubble. This implosion also causes a small flash of light and a powerful shock wave, giving these shrimps their other common name—pistol shrimp. These shrimps use their snapping claw for many functions, including communication, defense, and predation. Some species of Alpheus use specially modified hammer-like claws to drill elaborate galleries of tunnels into rock or dead coral. However, far from being a curiosity of natural history, the snap may have important consequences for coral reef communities. Recent studies have shown that the ambient noise of snapping shrimps can be an important indicator of reef health, and may in some cases serve as an acoustic settlement cue for juvenile reef fishes.

The snap of these shrimps also plays an important role in communication and interactions with symbiotic partners of these shrimp. Although most snapping shrimps are free- living, many species form symbiotic relationships with other marine animals including sponges, corals, gobiid fishes, echiuran worms, crinoid echinoderms, and sea anemones. For example, many species of Alpheus snapping shrimps form partnerships with different species of  goby fishes. These mutualisms have been some of  the most well studied  examples of cross-species communication in the sea. In this relationship, shrimp construct burrows in sand or rubble, which are colonized by gobies. In return, the goby acts as a lookout, warning the shrimp of approaching fish or other predators using a series of carefully timed tail flicks or other specialized behaviors. Shrimps maintain constant antennal contact with the goby while outside of the burrow, suggesting that this is necessary for accurate signal transmission.

Many species of Synalpheus snapping shrimps also dwell exclusively in the intricate canal systems of marine sponges. These sponges undoubtedly provide a critical predator-free habitat for these shrimp; fish typically immediately consume any shrimps removed from their sponge hosts underwater. However, experiments show that under some contexts, sponges can grow faster with shrimp living inside, and shrimp also defend their host sponge against predatory sea stars.

In some cases, these symbioses can have important effects on community functioning. For example, the shrimp Alpheus lottini typically lives symbiotically with branching pocilloporid corals. Although these corals are eaten by the crown-of-thorns sea star Acanthaster planci—a predator that can be several hundred times larger than the shrimp defender—A. lottini will vigorously defend its coral host by snapping and attacking the tube feet of the sea star using their snapping claw. Dense stands of this coral, protected by their crustacean symbionts, can actually provide refuge from Acanthaster predation to many other coral species, with important community consequences on coral reefs. 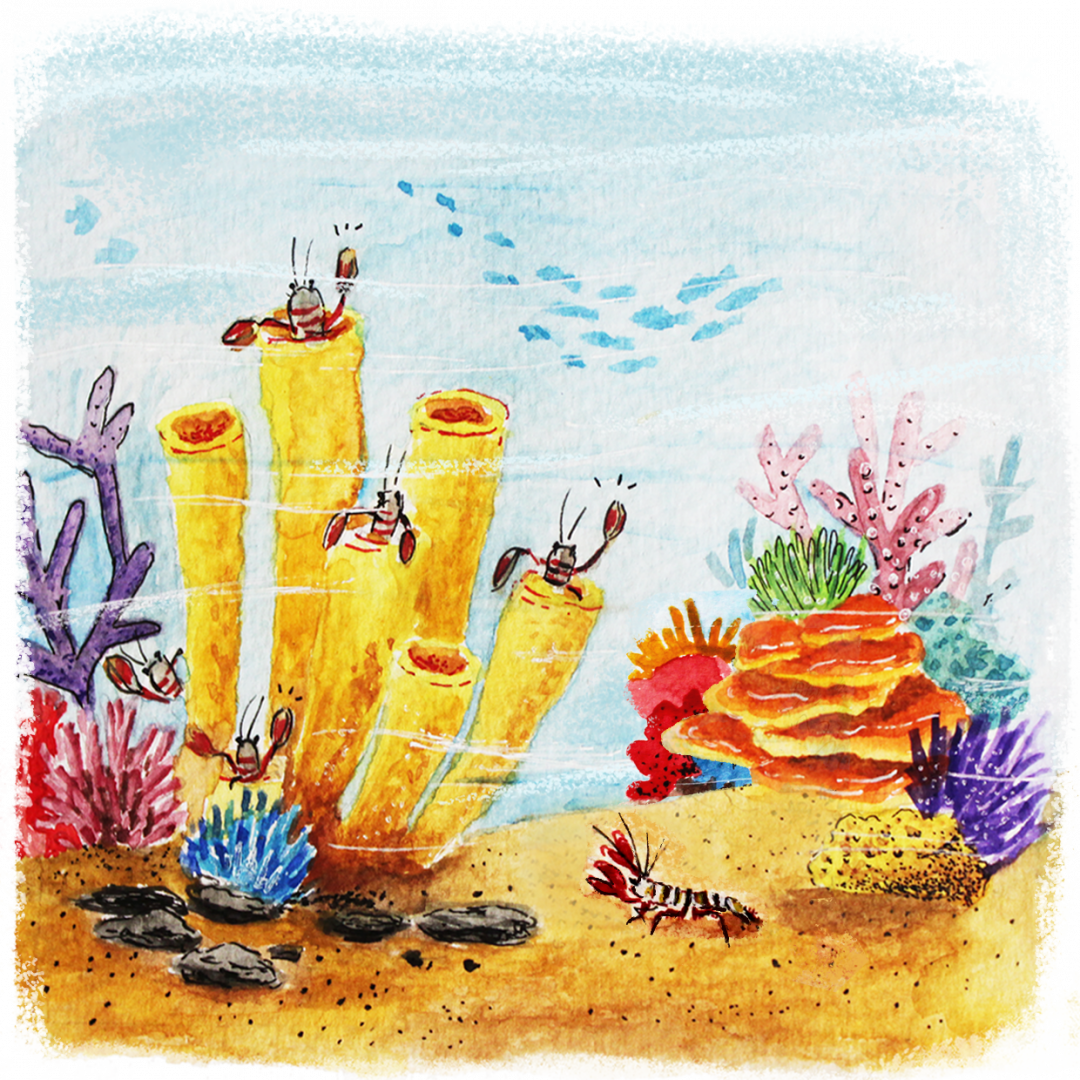 Snapping shrimp are also the only marine animals that show advanced social behavior,   in the form of eusociality. Eusociality is most well-known in terrestrial insects such as ants and bees, and typically consists of colonies consisting of hundreds or thousands of workers that sacrifice their individual reproduction to support a single breeding queen and cooperatively care for the young of the colony. Several species of snapping shrimps in the genus Synalpheus are known to be eusocial. These shrimp dwell in dense colonies in marine sponges, consisting of typically a single reproducing queen shrimp and tens to hundreds of worker shrimp that jointly defend their host. They are capable of complex group and individual communication. For example, individual worker shrimp can discriminate between colony members vs. non-colony members, repelling the latter with fierce snaps. Some eusocial shrimp colonies engage in coordinated snapping, a collective group defense in which a sentinel shrimp recruits the rest of the colony to snap in concert, resulting in a loud crackling sound that repels invaders.

This suite of traits allows eusocial Synalpheus to be competitively dominant to pair-living species: two decades of research across the Caribbean indicate that eusocial species are typically far more abundant than pair-living species and use more host sponges. However, recent surveys indicate a  drastic decline in  the  abundance of eusocial species in  areas (e.g. Belize) where they have been numerically dominant for decades. These declines are thought to result from multiple factors, including population cycles of the shrimp and recent changes in sponge and coral community structure in Caribbean coral reefs.

Thus, snapping shrimps play important roles in coral reef communities—as defenders of corals and sponges, bioeroders, and creators of the ambient soundscape that signals a healthy coral reef. Although most conservation research has focused on charismatic reef fauna such as corals and fishes, the important ecological contributions of these cryptic shrimps demonstrate the importance of the hidden biodiversity of coral reefs.

Kristin Hultgren studies phylogenetics and evolution of crabs and shrimps. She is a faculty member at Seattle University.

Akshaya Zachariah is an illustrator by profession, who believes in making a difference with the little time she has on this planet. Learning about nature, right from a young age, has opened doors for her to utilise her knowledge and translate that into illustrations to educate everyone around, including herself.