Sub-grouping in large social groups reduces the spread of infection 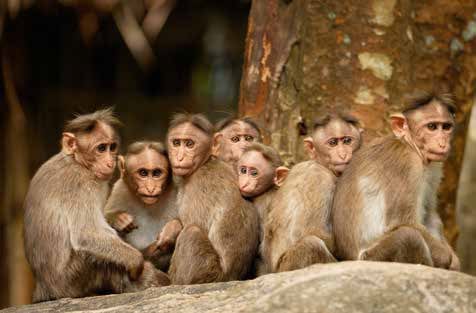 Social species such as primates and dolphins are known to engage in activities like grooming and playing, which help maintain bonds between individuals in a group. These otherwise casual behaviours, in fact, play very important roles in getting rid of parasites. One monkey pulls out a tick or a louse from another monkey in one of his routine inspections and prevents possible parasitic infection.

However, the risk of disease spread is also high in these species because individuals are constantly interacting with each other. Ecological theory suggests that disease transmission rates will be higher in larger groups because there is more potential for interaction. However studies examining the link between disease and group size have come up with mixed results—some find disease transmission increases with group size while others find the opposite pattern. In a recent study, Randi Griffin and Charles Nunn try and explain this incongruence using a network approach.

Griffin and Nunn first simulated the spread of a pathogen in artificially built social networks and found that spread is lower in networks that are more “modular”, i.e. consisting of more subgroups. This could be because pathogens quickly spread within modules but also die out before being able to spread to other modules. Then, using data from 19 species of primates from around the world, they examined the relationships between parasite richness and primate social structure. First, they found that primates that lived in larger social groups tended to have more modular social organisation. Also, those primate species which tended to have more modular social organisation had lower richness of socially-transmitted parasites. In other words, parasite richness tended to be lower in primates with larger group size because large groups tended to be more modular. These findings, taken together, provide some resolution to the inconsistency in findings with regard to the relationships between group size and disease risk. An interesting analogy to consider in humans? Having a close inner circle of friends might help prevent the spreading of your secrets all across your Facebook network!

Divya Ramesh is a staff writer at Current Conservation. divyaram23@gmail.com.