The Best Snake Hunters in the World

Sometime in the early 1900s, a German fancy leather trader came to India to look for snake skins. We may never know how he found out about the hunting prowess of the Irulas of Chengalpattu District but he very quickly organised what was to become one of the largest snake slaughters the world has ever known. Using middlemen, often Muslim livestock hide dealers, our German friend started a trade that eventually snowballed into the killing of over 10 million cobras, rat snakes, pythons and Russell’s vipers per year. And then it wasn’t just the Irulas – soon tribal hunters all over the country got into the act, but none had the finesse and expertise of the Irulas.

The trade was out of control and probably not sustainable for long. Luckily the combination of local and international outcry killed the bulk of the snakeskin industry with the ban on exports in 1976, but that put about 5000 Irulas out of a job and hard times followed. In 1978, with 12 Irula friends, I registered for a Cooperative Society for Snake Catchers. This was to let the Irulas continue to catch snakes, but only for the venom and then the snakes had to be released.

How they do it

I first met the Irulas in 1969 when I was on a snake collection trip to Madras for Haffkine Institute, then the biggest producer of antivenom serum. The late photojournalist, Harry Miller had written about the snake hunting art of the Irulas in the Indian Express and he introduced me to Arjun, who blew my mind with his casual skill. From that moment on I had found my peer group – I instantly like their reserved, calm attitude and deeply admired their vast store of wild knowledge. Over the next 34 years, I went on innumerable snake hunts and learned much.

One of the first bits of Irula “magic” they taught me was how to recognise the alarm cry of the babblers, mynahs and palm squirrels when they spot a snake. Very useful, especially after the rains make the bushes dense and snakes are hard to see. I learned how to collect “stick honey” from the small bees that harvest flower nectar every April and how to eat live termites without getting my lips and tongue bitten. Next, they tried to teach me how to find snakes by their tracks but decades later, I’m still a rank novice. In a harsh, hot land like India many snakes spend a good part of their lives underground – either hunting, eating and digesting rats or just tiding over the burning daylight hours. The Irulas specialise in finding the rat holes, termite mounds and other places snakes stay in, and that is like real magic. 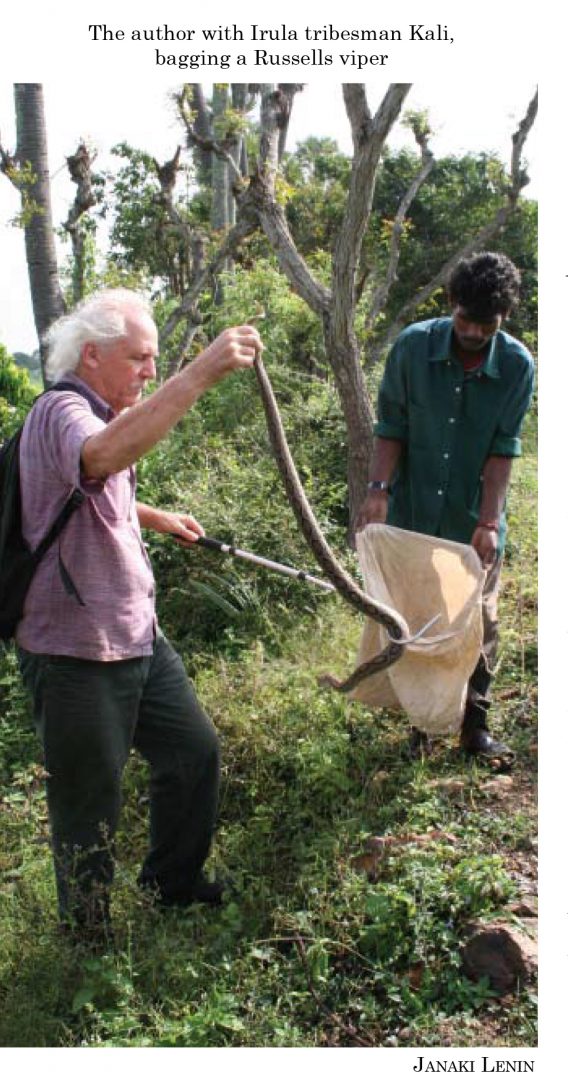 Last July my partner Janaki and I went snake hunting with Kali, a longtime Irula friend. He was catching the “Big Four” venomous snakes: cobra, krait, Russell’s viper and saw-scaled viper for venom extraction. We started with the cobra and headed straight to the boundary of a rice field where mole rat (Bandicoota bengalensis) burrows abounded. Scarcely noticing crab holes and rat holes with rat tracks or fresh diggings, Kali homed in on one with a slight smoothness, a shiny bit of compressed dry earth on the bottom edge. He peered in, dug a few licks with his short crowbar and showed us a very obvious snake track impressed on the softer earth deeper down. No root system to hamper work, Kali dug a wide access into the hole swiftly and carefully. Careful so not to cut the snake. After digging a while, occasionally peering in, Kali takes a thin, springy, green stick and gently pushes it into the hole about a foot. The stick mysteriously pushes back out an inch. Kali smiles and pushes his elbow to mimic the snake’s coil as it pushes against the stick. Now he knows he can safely dig a foot more without harming the snake. In a few short moments, the cobra is visible; it’s obviously a female because she’s with her 20 or so eggs! She is carefully removed and bagged; the eggs are collected for incubation back at the Irula venom centre.

Over the next few days, our Irula pals took us first to Russell’s viper territory, dense hedgerows of spiny Agave plants and we pulled out two adult and six baby Russell’s (the babies for release in a safe place). Then we went after kraits, the clues this time being a shed skin and a fresh scat. Digging out this elusive snake of the night was more difficult – the large male had found a hole in the root system of a neem tree. But again, no problem for the Irulas; finding the last of the Big Four venomous snakes of India was a snap. We spent the morning peering down into the rough bark of palmyra trees and found several of the tiny but dangerous vipers tightly coiled and well hidden. Again, the Irulas knew where to look: according to the species and the season.

When my son Nikhil and I wrote up the rough data of the 5 day hunt for a scientific note we found that we had slowly and carefully hunted about 3 km per day and caught a total of 55 snakes, including a bunch of rat snakes, water snakes, striped keelbacks and sand boas just to measure and release. We also recorded 158 shed skins of 11 species of snakes and started formulating ideas of how to use shed skins to study status and distribution. After all, it’s quite easy to identify a snake from the shed skin.

But the Irula knowledge goes far beyond the world of serpents. Being big consumers of the tasty field rats that abound in our rice fields, the Irulas have worked out rat finding and capture techniques that puts pussycats to shame. A hunter-gatherer can’t waste precious time and energy digging up a vacant burrow by small signs like tracks, dung, fresh digging and even the presence of rat lice. They are so good at rat catching that the Government of India’s Department of Science and Technology gave the Irula Cooperative a grant of Rs. 10 lakhs to do a pilot project of rodent control by direct capture. During the 20-month period, the Irulas captured over 400,000 rats, probably saving at least 12 tonnes of grain and other crops, without using a drop of a deadly pesticide. Unfortunately, the project was never taken to its logical conclusion: make rodent control in India a labour intensive operation that would employ lakhs of tribal people. As usual, the big industries (the pesticide producer) run the show and the Government bows to big bucks, never mind how dangerous and ineffective these rodenticides really are.

The Irula Cooperative is one of the most financially successful cooperatives in India, but it would be wonderful to see the Irulas’ other talents being fully utilised for the good of the country and to make a living for them too. Rodent control, crocodile farming, technical assistance to field biologists are just some of the many things the Irulas are expert at. The Coop’s sister organisation, the Irula Tribal Women’s Welfare Society, has helped Irula women get recognition as herbal and the tree planting experts. They have planted lakhs of trees since they started in 1986 and the future looks a lot brighter for these great people described in recent Government texts as ‘most primitive’ and as having the lowest per capita income in the country.

The Irula literacy rate is dismally low and few of their kids finish more than a couple of years of school. On the other hand, their knowledge of nature far surpasses most college graduates or even professors – now that’s food for thought!

This brief introduction to the field people I admire most in India would not be complete without mentioning the two non-Irulas who act as the catalysts in the success of the Irula Snake Catchers’ Cooperative and the Irula Women’s’ Society: S. Dravidamani and K. Krishnan. 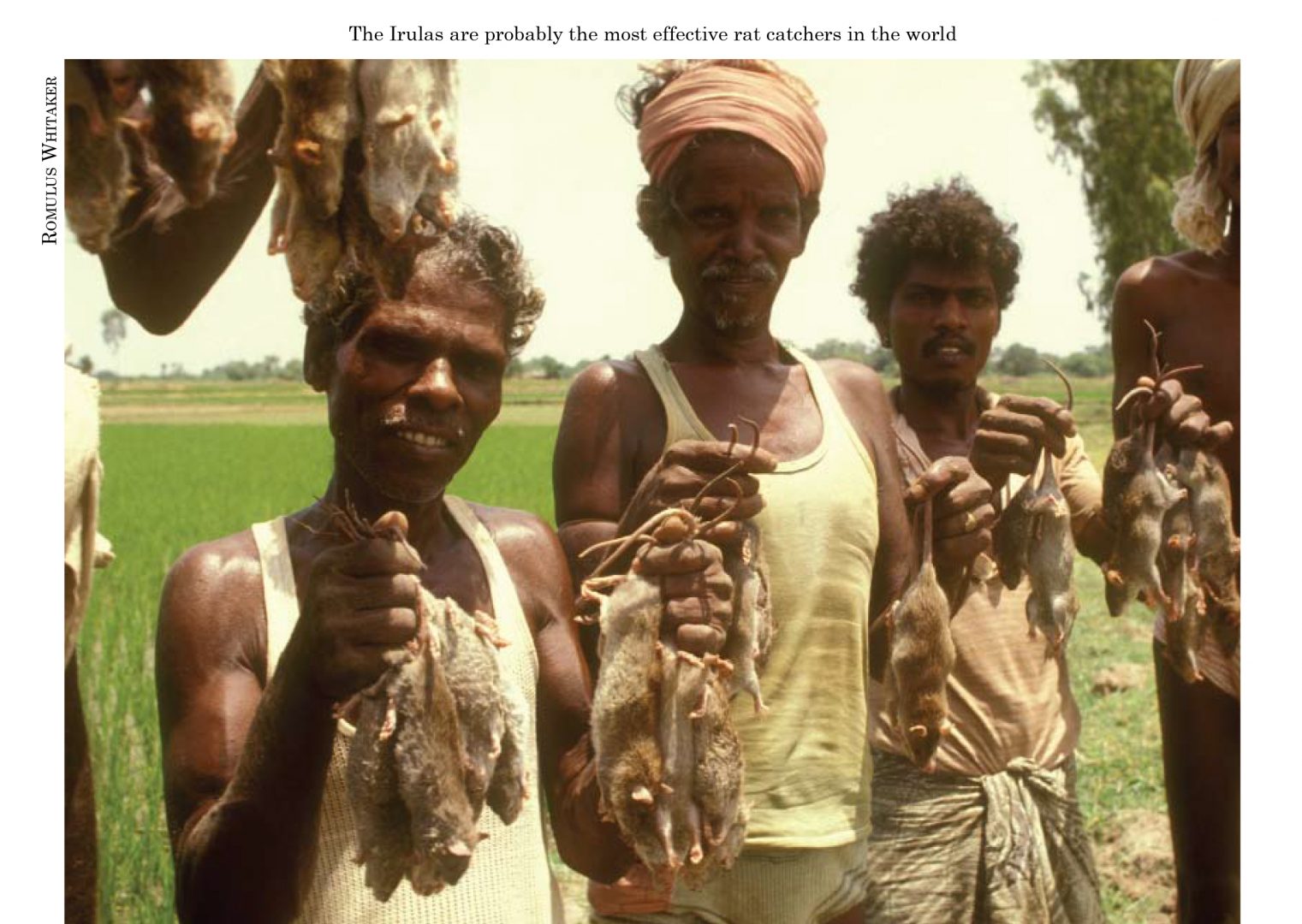