The consequences of conflict on Congo’s great apes 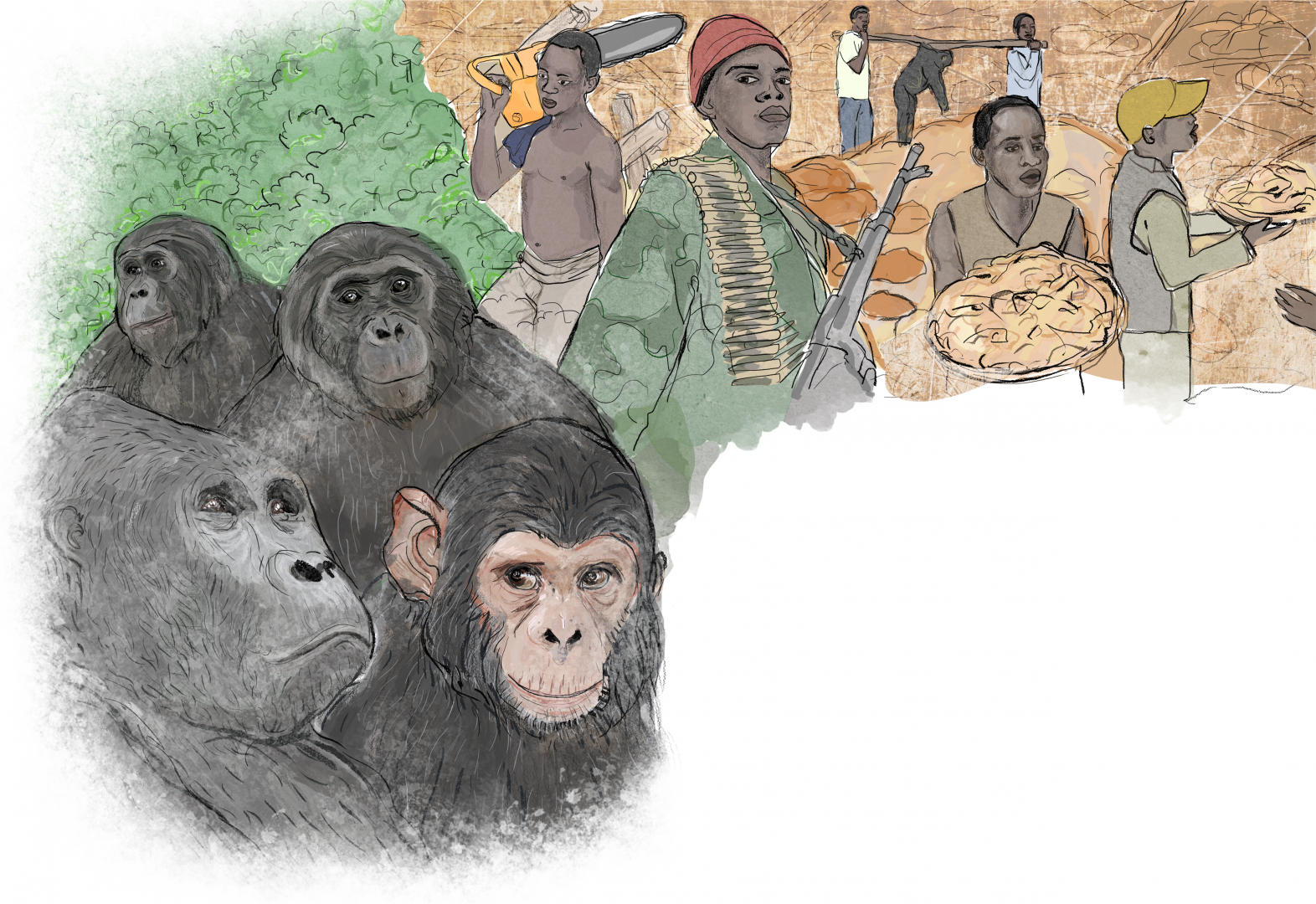 Our closest biological relatives, nonhuman primates, are facing an extinction crisis. While 60% of primate species are threatened with extinction, the great apes of the Democratic Republic of Congo (DRC) are experiencing increased turmoil due to the ongoing conflict occurring within the country.¹ This conflict, fueled by the DRC’s rich natural resources, has lead to a decline in the population of chimpanzees, bonobos and all four subspecies of gorilla, as well as those of  numerous other species.

The DRC is home to a large portion of the Congo Basin, the second largest rainforest on earth, and is crucial for maintaining wildlife diversity. The Congo Basin houses a wide array of species, many endemic, that cannot survive elsewhere. However, civil war is taking a toll on the DRC’s rainforest residents, both human and nonhuman. Despite 45% of the DRC’s land surface being covered in dense forest, the great apes are not safe within it.² Protected land and national parks are being exploited as laws safeguarding the land are disregarded. Kahuzi-Biega National Park, home to one of the largest remaining groups of endemic Grauer’s gorillas, along with several other national parks, still have occurrences of bushmeat hunting, deforestation and mining.³ This worsening conflict, caused by political instability, is threatening the lives of many, but there are ways to help lessen the war’s impact on great apes.

The war began soon after the 1994 genocide in neighboring Rwanda, leading to an influx of refugees fleeing to the DRC. Many of these refugees were genocidaires, those guilty of the mass killings in Rwanda. They formed armed groups that the government of the DRC (formerly Zaire) was unable to defeat, leading to the “First Congo War.” The war ended in 1997 with the overthrow of Zaire’s government, leading to the creation of the Democratic Republic of Congo. A new president, backed by Rwandan and Ugandan governments, took office, but that did not end the fighting for long. The new president soon switched sides, going against his former backers, which led to a joint invasion of Rwanda and Uganda. This invasion initiated the “Second Congo War” in 1998; this lasted until 2003, when the DRC’s government, plus other nearby countries, fought the invaders and rebel groups until a peace deal was signed.⁴ Despite the peace deal and a new transitional government, political instability and conflict continued in the eastern region of the country and lawlessness and violence persisted. Powerful rebel groups continued to emerge, and over 70 armed groups are present in the country today.⁴

Ironically, the areas that conservationists are trying to protect, contain the natural resources–minerals and forests–that fuel the conflict by providing the rebels with the financial means to operate in the country. Gold, diamonds, cobalt, copper, zinc and the more recently popular coltan (a component in electronic devices), are all found within the DRC. These minerals have garnered attention from major corporations, corrupt governments and warlords, keeping the country divided by giving the rebel groups incentive to continue fighting locals and each other to take control of the mines and the forests in order to stay in power. This has the further effect if keeping the locals living in poverty despite the country’s mineral wealth, an inequality that facilitates the perpetuation of the conflict.

This long persisting conflict has led to both direct and indirect consequences endangering apes. The war has slowed the progress of many conservationists working to save endangered species, as it has become very unsafe to continue in-field conservation work due to the ongoing violence.⁵ Disease, habitat destruction, bushmeat hunting and mining have taken their toll on the populations of gorillas, chimpanzees and bonobos and have the potential to eliminate these species from the wild

The economy of the DRC has been dependent on the extraction of natural resources, including timber, to bring in income. Many policies are in places to keep logging practices more sustainable; the DRC has tried to conserve its national parks, and approximately 60% of its original forest cover remains. However, deforestation is still occurring, including in areas (especially the Eastern DRC) that provide habitat for chimpanzees, gorillas and bonobos.⁷ The process of logging impact the apes because it can change the composition and structure of the forest, leading to fragmentation and making it less suitable for the apes who rely on it for food and shelter. Chimpanzees and bonobos build nests in the trees and gorillas construct them on the ground using the surrounding vegetation. Sadly, the fragmentation also isolates groups of apes from each other leading to inbreeding, which  reduces genetic diversity and lowers fitness, ultimately causing a reduction in ape populations.¹ None of these species can survive without the forests.

Illegal bushmeat hunting is contributing to the decimation of ape numbers. There are two main reasons why people hunt apes. First, refugees who fled to the DRC rely on forest animals; apes are appealing because they are large and offer a lot of meat. Second, soldiers poaching the apes not only for food but also as a source of income: Their meat is considered a delicacy in several countries. It is difficult to assess the size of ape populations because of security threats posed by several different militia groups found throughout ape territory. However, it appears that bonobos have been particularly hard hit by poaching; during the active fighting that took place during the First and Second Congo Wars, about a third of the frontlines occurred within the home range of bonobos, which were killed in larger numbers to feed the fighters.³

Further, fewer than 4,000 Grauer’s gorillas are thought to remain today.² This staggering loss has pushed conservationists to establish education programs working with locals to teach them about the value of great apes and why people should not be consuming ape species. Instead community outreach programs are working with locals to create alternative food sources that are considerate of the environment and putting an emphasis on the value of apes as a living animal and not a food source.¹ To address the demand outside of the country, social media and the Internet are being used to bring awareness to the issue on a global scale. By targeting young people and community decisions makers, social pressures are being placed on people who consume bushmeat for reasons other than survival and are pushing for cultural norms to change surrounding bushmeat consumption.¹

Large surface deposits of coltan and cobalt can be found throughout the eastern region of the DRC.⁵ Coltan is a rare ore most notably used to make capacitors in cell phones and other electronics; demand for coltan has skyrocketed because of the short life cycle of mobile devices.⁸ Cobalt can be found in batteries.³ The increased use of technology and electronics across the globe has made coltan and cobalt desirable to countries around the world. Mining of these and other minerals, provides jobs for many of the Congolese people, including children, who are desperate for money. By selling minerals to different rebel groups or by working for those groups, natives are able to increase their incomes. However, these militia groups pay the locals very little and keep the remainder of their earnings–sometimes millions of dollars–for themselves. They use these profits to buy weapons, which they then use to threaten natives and force them to mine. Weapons also allow fighting to continue between rebel groups who attempt to claim additional territories that contain profitable mineral deposits; some of these sites include  areas that were once safe havens for apes. People working in mines (and those in logging camps as well) are not only destroying the habitat, but also hunting apes for food. The biggest threat facing apes is the bushmeat hunting associated with mineral mining. 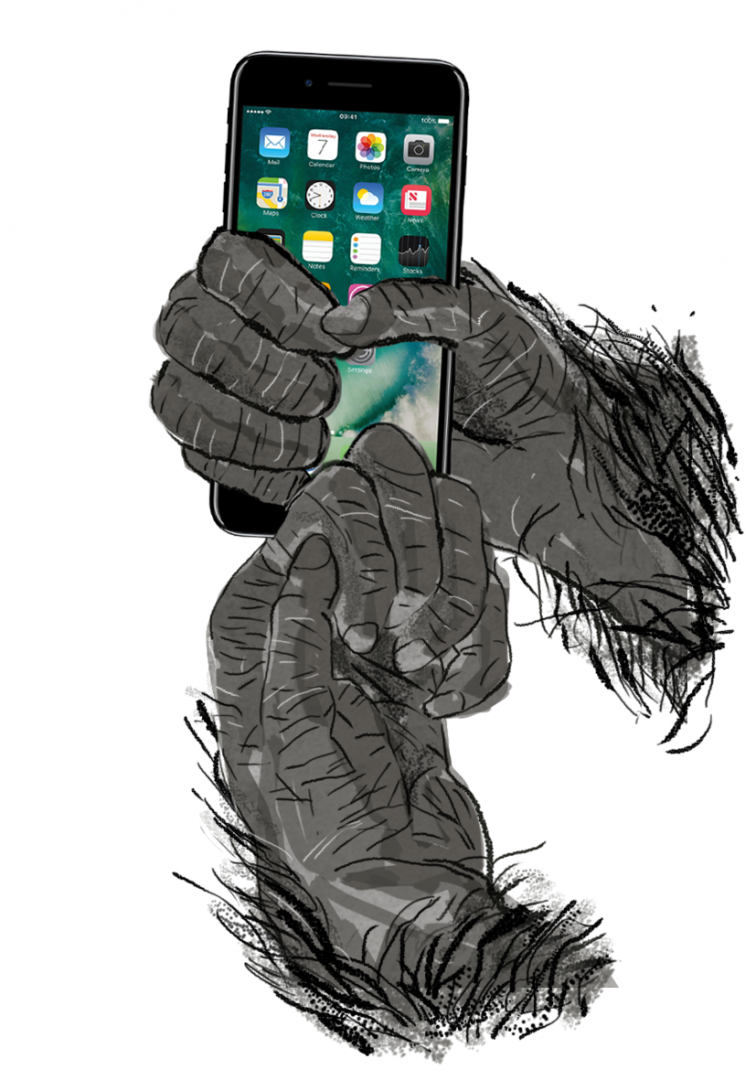 The great apes of Africa have immense importance to humans and the ecosystem they live in; losing apes would have negative impacts not just on biodiversity, but also on the human inhabitants of the DRC (and beyond) and on the environment in which they live. Apes have many similarities with humans. They have large brains, use tools and share a similar evolutionary history; studying them can increase our understanding of ourselves and our past.¹ Apes have taught and can continue to teach us about human behavior, learning and more, if we allow them to persist.

Apes also play an important role in their habitat and their loss would not go unnoticed. Apes consume a large quantity of food per day and can disperse seeds of varying size across large distances as they forage for more food; they play an important role in plant reproduction, helping forest flourish. The extinction of great apes in the wild would alter the balance of the entire rainforest ecosystem, which is home to countless plant and animal species that are essential for food, medicine and other resources, and which performs a variety of ecological services such as producing oxygen and mitigating the impacts of climate change by absorbing carbon dioxide.¹

How you can save great apes

While the war in the DRC officially ended years ago, the continued difficulties in the country mean that great ape conservation efforts are still of the utmost importance. Through donations to conservation groups working to protect apes and provide assistance to community members, some of the hardships attributed to the residual conflict could be abated. Educating locals about the importance of ape species can be vital to reducing the number of deaths caused by hunting and disease.

Another way to alleviate this problem is to decrease the demand for the products coming from the Congo’s illegal mining and timber extraction activities. It is difficult to ensure that a product is “conflict-free”, meaning the coltan and other minerals are not from miners who worked for rebel groups or mined illegally, but it is essential to try.⁸ Supply chains can be hard to follow, but consumers can “shop smart” and support companies that are working to reduce corruption and mitigate the issue by analyzing their supply chains and doing their best to avoid illegally mined minerals. Choosing companies like these can put pressure on other companies to pursue similar policies. If manufacturers only purchased sustainably-sourced resources, the miners of the DRC would be incentivized to either work legally and sustainably or even cease mining altogether.

An additional solution is recycling–not just cell phones and electronics, in order to reduce the need for newly mined coltan and cobalt, but also products incorporating other minerals and timber that otherwise would continue to be extracted from forests of the DRC. Lessening demand through smarter purchases would reduce income options for the rebel groups, thus potentially making it possible for the Congolese Army to defeat them. This, in turn, would help decrease the violence, allowing for the eventual strengthening of the Congolese government and a gradual ending to the enduring conflict. If the government regained control, they could more easily enforce laws against poaching, mining and logging, thereby allowing remaining ape populations to thrive and come back from the brink of extinction.

These issues may seem remote to many readers, but people around the world can contribute to ape conservation efforts by sharing information about the issues, the importance of apes and potential solutions–after all, you cannot solve a problem without first realizing it exists. Once people have been educated, they should be inspired to seek out ways to help through donations, recycling and being a conscious consumer–ultimately improving conservation outcomes and helping ensure the maintenance of great ape populations.

Madhurya Balan is an artist, illustrator, experiential learning facilitator, gardener and re-wilder. She is a believer and practitioner in free thought, speech and choices.