The dire conservation status of lions in West and Central Africa 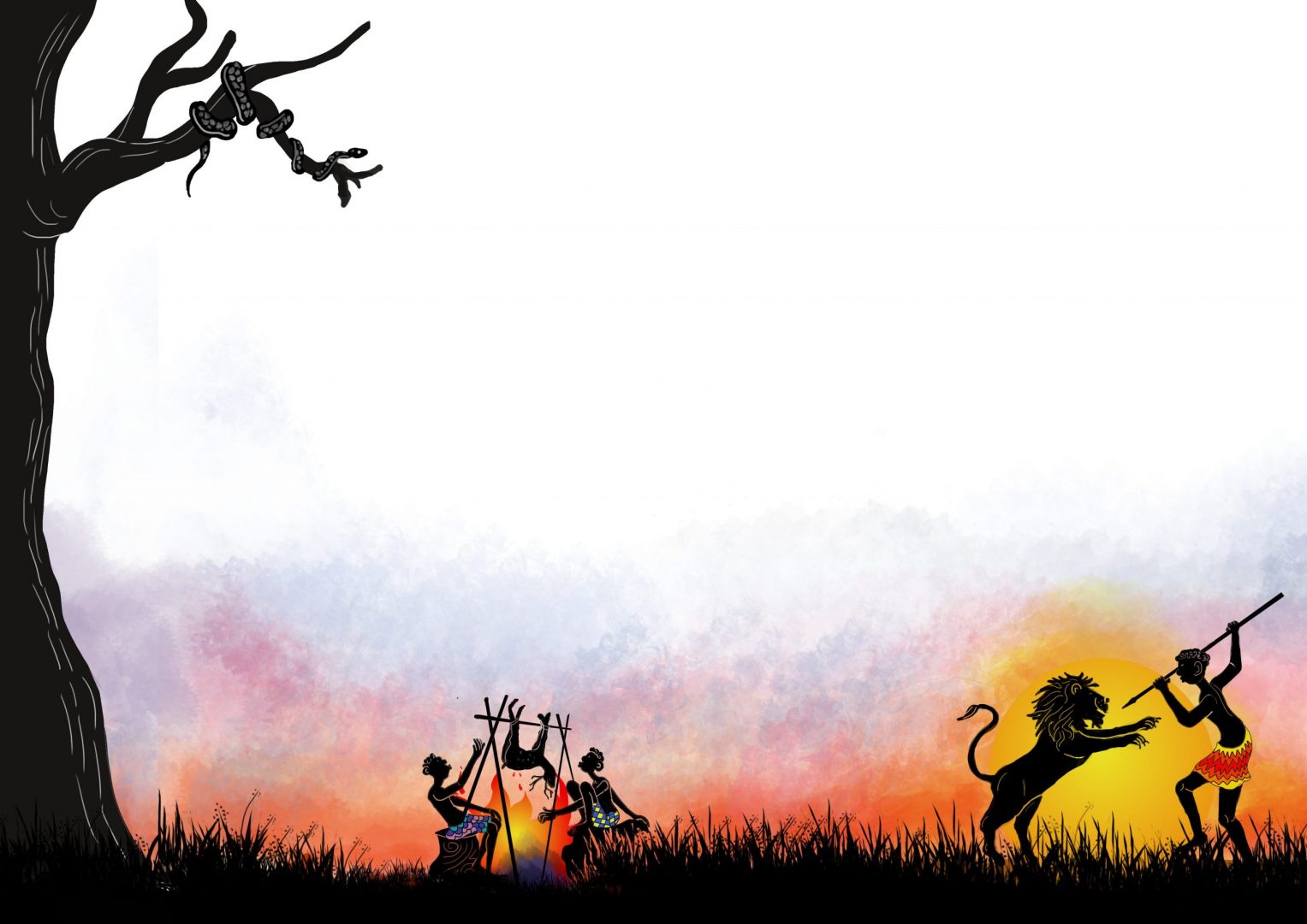 Besides elephants, lions are the quintessential symbol of wild Africa, used as icons of strength and power in national flags, coats of arms, historical and contemporary art, and logos of sports teams and private enterprises around the globe. The species’ popularity translates to high economic potential for countries that still harbor populations; lions are at the center of the tourism industry in sub-Saharan Africa, which generated US$ 36 billion of foreign revenues in 2012 alone. The portrayed king of the animal kingdom is losing ground, however. While lion populations are stable or increasing in a few Southern African nations such as Botswana, Namibia, South Africa and Zimbabwe, steep declines have occurred in West, Central and East Africa. These declines are driven by habitat loss, indiscriminate killing of lions in response to perceived or real conflict with livestock, poorly regulated sport hunting, and the depletion of lion prey through unsustainable bushmeat hunting. While the extent to which each of these threats limits lion populations varies by country, the impact of bushmeat hunting on lions and other savannah carnivores has been largely ignored until recently. However, it is now clear that the problem is pervasive and occurs in virtually all protected areas in savannah habitat.

As the largest land predator of the African continent, lions rely on a stable supply of prey—predominantly large ungulates weighing 200-550 kilograms. Lion population density is correlated with the available biomass of wild herbivores within this weight range. Large ungulates, however, are targeted by an unsustainable and increasingly commercialised bushmeat trade, leading to collapses in prey populations across large parts of savannah Africa. The drivers for this trade include human encroachment of wildlife areas, poverty, and food insecurity, while conservation efforts are hampered by inadequate wildlife laws and enforcement. An analysis of population data from 1970 to 2005 on 78 species of herbivores revealed that while population sizes increased by 24% in Southern Africa, they declined by 52% in Eastern Africa and by 85% in West Africa.

For lions and prey alike, the situation is most alarming in West Africa. In response, we helped to initiate and coordinate a massive effort to survey lion populations across the region. Between 2006 and 2012, 21 protected areas were surveyed, encompassing all of the largest protected areas within the historical lion range in West Africa, and the best remaining lion habitat in this region. All of the sites were reported to harbor lions in 2005, when we brought together wildlife authorities from West and Central Africa who provided their best assessment of where lions could still be found. However, after the survey was complete, of the 21 protected areas surveyed, only 4 still harbored lions. Lions now occupy only 1.1% of their historical range in West Africa. The total West African lion population is estimated to number 406 (273–605) individuals, likely representing <250 mature lions. Above 90% of the remaining lions likely persist in one population, in the trans-boundary W-Arly-Pendjari protected area complex, straddling the border region of Benin, Burkina Faso and Niger. Relict populations of <50 individuals each survive in Senegal’s NiokoloKoba National Park as well as in Nigeria’s Kainji Lake National Park and Yankari Game Reserve. These recently published results warrant listing of the lion as Critically Endangered in West Africa on the IUCN Red List. The current IUCN Red List already supports a separate regional listing of the lion in West Africa, and is likely to respond to this critical situation by assigning lions the highest threat category in this region in the new version of the Red List, scheduled to be published in 2015. 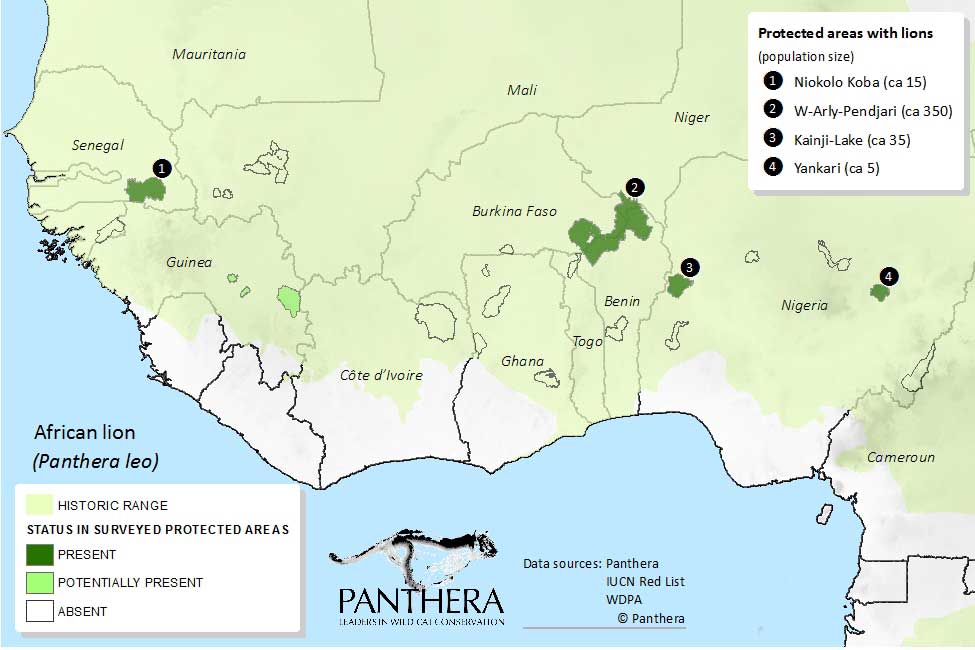 While this listing may draw some much-needed attention to the plight of the lion in West Africa, concrete measures are desperately needed on the ground to safeguard the remaining populations. A comparison of protected area management  characteristics between those West African sites that lost lions recently and those where lions still occurred revealed that two factors were mainly responsible for lion persistence: protected area size and management budget. In West Africa, where the carrying capacity for large ungulates is comparatively low, and where intense bushmeat hunting pressure inside and around protected areas is generally high, very large protected areas of 4,000 km² and above are required to ensure lion persistence. To effectively protect those areas, figures from East and Southern Africa suggest that US$2,000/km² is required to maintain lions at carrying capacity in unfenced protected areas. In comparison, the West African sites we surveyed operated on an average budget of US$28/ km², with sites still harboring lions possessing significantly higher budgets than those that lost their lions (US$61/km²vs. US$4/km²). By far the highest management budget, US$197/km2, was applied at the site that harbors >90% of West Africa’s lions; W-Arly-Pendjari. The lessons learned from this comparison are as simple as they are challenging. Lion conservation efforts in West Africa should focus on the largest protected areas that still harbor lions. At these sites, management budgets need to be increased significantly; even the best-funded site in West Africa, W-Arly-Pendjari, will require a tenfold increase in management budget to meet science-based recommendations on budgets needed for effective lion conservation. 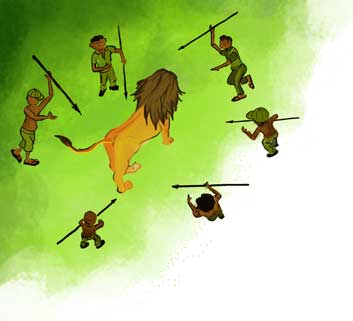 Considering that all eleven former or current lion range countries in West Africa are among the 50 poorest countries in the world, lion range states in West Africa will be unable to mobilise the resources required to secure their remaining lions. In the short term, that will require massive financial and technical assistance to range states from outside, principally by the international donor community in the developed world. For any such investments, it will be imperative that conservation initiatives assure sound governance of the funds, and that adequate funding levels are sustained in the longterm. Considering the unique potential of the lion as a magnet for nature-based tourism, investment should also be directed toward developing and enhancing photographic tourism in politically stable countries such as Benin and Senegal. This will help to create and maintain economic incentives for lion conservation, and develop enduring revenue streams for PA management not wholly reliant on donor funding. 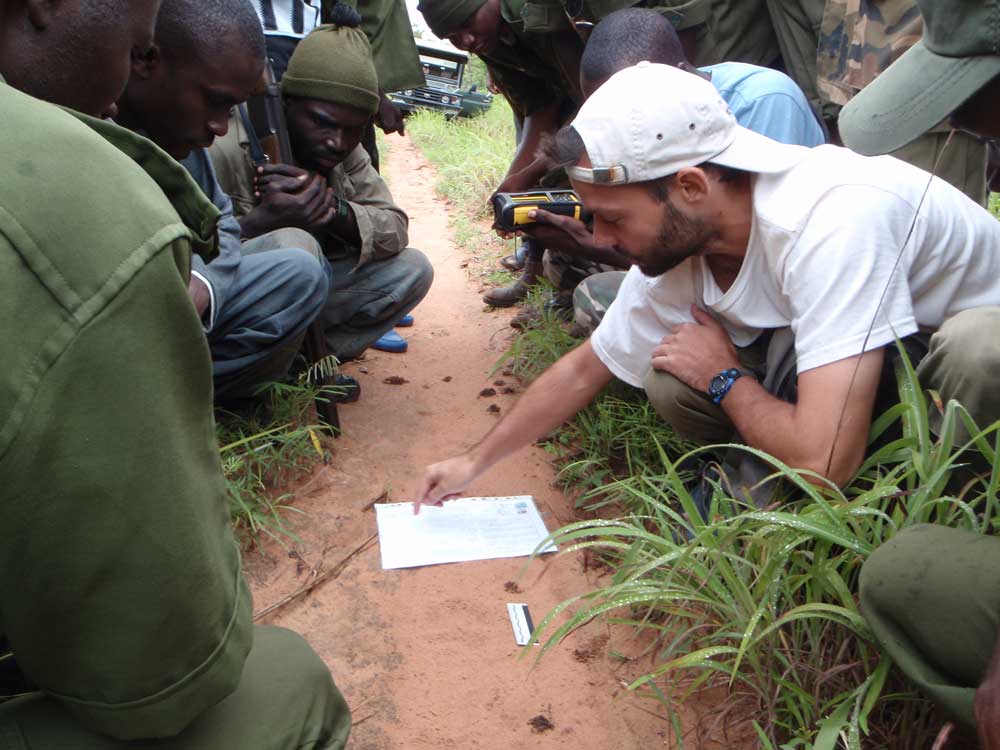 In Central Africa, almost no data exist on lion population sizes and trends, with the exception of Cameroon, where monitoring has revealed steady decreases in population size over the past decade. The largest continuous area thought to harbor lions is in the Central African Republic (CAR) and adjacent northern Democratic Republic of Congo (DRC). However, no lion field surveys have ever been carried out in either country, and available information on lion range and numbers in this region is highly speculative. Field survey efforts are urgently required but are hindered by the tenuous political situation in those two countries. Aerial ungulate counts recently conducted across northern CAR, covering 95,000 km2 of the best remaining wildlife habitat, established that large mammal numbers in the area declined by 94% in the past three decades. As elsewhere, the massive collapse in wildlife numbers is driven by uncontrolled bushmeat hunting and trade. Considering the close link between ungulate biomass and lion densities, it can be expected that lion populations in northern CAR suffered concomitant declines. The remaining wildlife habitat in eastern CAR and northern DRC has not yet been aerially surveyed.

However, conservationists familiar with these areas expect wildlife collapses similar to those in northern CAR. The first step towards securing remaining lion populations in CAR and DRC will be to confirm where populations remain and assess which populations hold the best promise for the long-term survival of the lion in Central Africa. 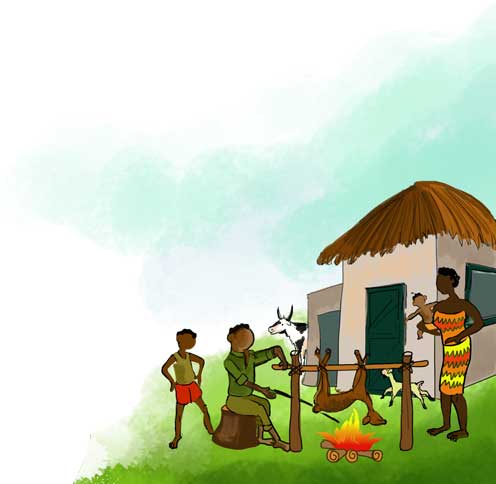 Hunter is President of PANTHERA, lhunter@panthera.org