The Making of Mowgli

It had been nearly half an hour since we started looking for the nesting bird that we had been waiting to spot all day. We weren’t hopeful, and it was getting dark. But Mangu Singh Shekhawat confidently continued to scan the thick forest on the hill across the nallah. Suddenly he froze. We followed his gaze and, sure enough – there it was! Obscured by a drooping vine, thirty feet up on a rocky ledge, and glaring at us with its penetrating yellow eyes was our bird – the cryptic Brown Fish Owl – sitting in its nest. Mangu gave a triumphant grin that seemed to say, “I told you so!”

When we first arrived in Sariska for our study on birds in March 2003, we had expected to employ a local person from the Gurjar community as our field assistant. Instead, we ended up working with this energetic, mischievous young ‘outsider’ hailing from a far-off village, who earned a living as a nature guide to tourists at Sariska. On our very first day in Sariska, an aggressive rhesus monkey got into our vehicle and grabbed one of our bags. Mangu swung into action, chased the rhesus and deftly prised it out of the surprised monkey’s hands! It was then that we sensed he indeed was a different kind of person. 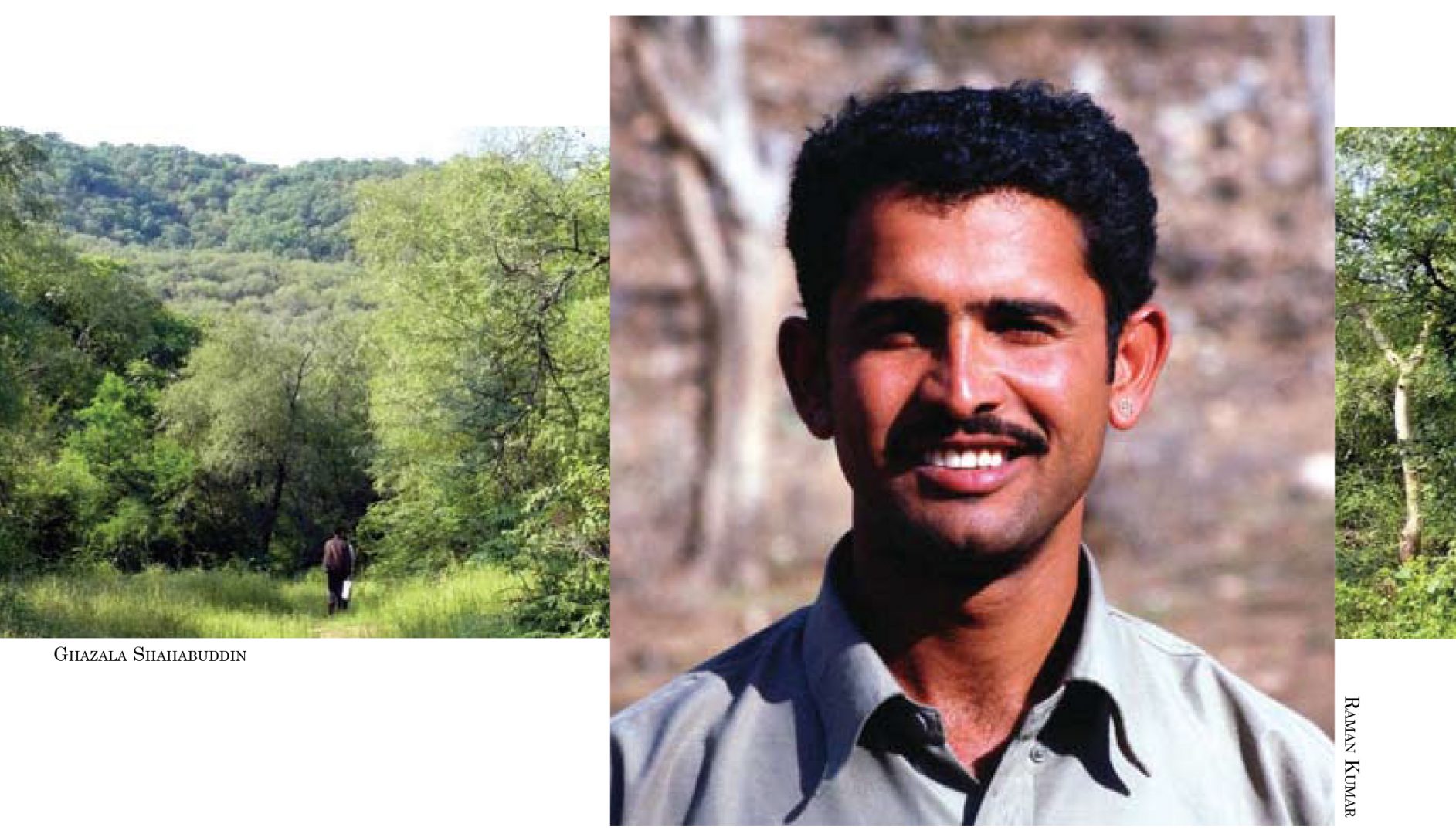 Mangu’s knowledge of Sariska was intimate; fieldwork was something he looked forward to. Inset: Mangu Singh Shekhawat always wore traditional ear studs and a disarming smile; his good humour brightened up even the most tedious field days

But how did Mangu end up in Sariska? “Back in our village, I helped my father and brother till our small piece of land. Cultivation was failing because of the long drought and I started looking for a job. Then I came across this advertisement in the newspaper calling for trainee nature guides and thought I’d try my luck in Sariska,” Mangu recollects. “I was new and had absolutely no knowledge about the forest or animals. It took me more than a year to gather confidence. Later, with experience, I started to enjoy it.” He smiles shyly and adds, “Now they call me ‘Mowgli’ Mangu.” Today, he’s just about the only trained guide remaining in Sariska. Out of the twenty-two who undertook the training, many have left their jobs. Some continued being nature guides but went away to other parks like Ranthambhore and Keoladeo. The rest took up better-paid jobs at privately owned resorts.

During our early days in Sariska, Mangu showed us around the Reserve, familiarising us with the terrain. His field skills and excellent relations with both the forest staff and the villagers helped us overcome the teething troubles of fieldwork. Every time we crossed a forest chowki, Mangu would inevitably stop and ask about the health of the forest staff there. His very presence was sure to bring an indulgent smile to every staffer’s face! When passing a hamlet there was seldom an occasion when Mangu was not invited for tea or lassi by some villager. His high spirits and good humour never failed to dispel the tedium and monotony of the long days of fieldwork.

Mangu quickly fits into his role while setting up the project. When we were scouting for sites, his knowledge of the place and the people was a great asset. Not only did he suggest ideal locations but also helped us plan out logistics for our study, which was aimed at investigating the effects of forest resource extraction on bird communities. During the course of our study, Mangu rapidly supplemented his existing knowledge of Sariska’s fauna by including more than 100 species of birds to his list, which was previously limited to large mammals as demanded by his job as a tourist guide. His sharp eye was quick to detect and identify birds and soon he also became familiar with their calls. With plants, he was equally adept. Though he already knew the vernacular names of many plants, he also learnt their scientific names with enthusiasm.

‘Mowgli’ Mangu’s observations go beyond plain identification and touch the realms of natural history and ecology, something he has learnt not from books but on his own in the field. Why are the vultures gathering there? – There must be a kill. Why are the partridges alarming? – There should be a mongoose nearby. Is that bird carrying a grub in its bill? – There should be a nest with chicks. And unlike many other paid naturalists who tend to exaggerate events just for extra effect, we found that his portrayal of events, animal behaviour and sightings were true in every detail.

Instead of being intimidated by technology Mangu eagerly mastered it; new instruments fascinated him. He took the initiative to understand the use of gadgets like the rangefinder and GPS and learnt scientific survey techniques such as point counts. This was a great relief; the tasks of data collection could now be shared efficiently and we could concentrate more on observation. By the time we concluded our fieldwork, Mangu had learnt and contributed more to the project than an additional researcher could ever have.

Mangu carved out a niche for himself as an excellent guide, especially among serious naturalists and birdwatchers. His reputation spread by word of mouth. “Most tourists are not seriously interested in wildlife,” he often complained. “They are impatient and loud and only want to see tigers. I prefer people who genuinely appreciate the wilderness.” After a tedious week with noisy tourists from Delhi and Jaipur, he looked forward to Friday afternoons when he was contracted with the Sariska Palace Resort to take groups of birdwatchers out on a birding walk. Accompanying him into the forest, one could sense his keen enthusiasm for all wildlife – whether a humble dung beetle or a charismatic king vulture.

Apart from guiding hardcore wildlifers, Mangu has also had a chance to assist several documentary filmmakers. “I have learnt a lot from such people,” he admits. “They have helped me develop a better understanding of nature.” He shows his prized possessions handed to him as gifts by visitors impressed with his work – a pair of binoculars, a field guide to birds, several books, pictures, postcards and souvenirs. His fascinating experiences in tiger country with various naturalists over the years could fill a book. “It was a quiet afternoon,” he narrated one such incident. “I was helping a German filmmaker take shots of a langur. The monkey had descended to drink water from a forest stream, when a leopard, who apparently had been eyeing its prey for quite a while, jumped out of the overhanging tree to grab the unwitting animal!” His eyes twinkle at the recollection. “I was so lucky to have witnessed such an awesome sight.” During his long years at Sariska, Mangu has earned the trust of the park officials at all levels. Any information provided by him on wildlife is taken seriously. He is one of the few regular volunteers during the annual wildlife census. Mangu also has the distinction of being the only person outside the forest department to win an award for his contribution to the cause of wildlife conservation. Working as a guide and doubling as a field assistant, Mangu regularly sent money home. “There’s no water for our fields. During the drought the well dried. Now we need to sink a bore-well and that is expensive,” he used to say. “I like this work. It is exciting and I learn a lot. Someday I will have my own Gypsy. I would also like to learn English so that I can explain things better to foreign tourists.” However, Mangu’s plans went awry with the disturbing news that tigers had disappeared from Sariska. Mangu was very concerned and he volunteered with the forest department to search for tiger signs, and collect intelligence about possible poaching.

But soon it was official: the tiger was declared locally extinct in Sariska. “Tourist numbers dropped drastically and I had two kids to bring up,” Mangu lamented. “I considered moving to Bharatpur or Ranthambhore, or even going to Jaipur and work as a tourist guide.” Finding that it was difficult to create a niche for himself from scratch in other wildlife areas, he reluctantly went to Jaipur to seek a living for himself as a regular tourist guide.

It was a struggle having to switch gears from wildlife to conventional tourism. But Mangu being Mangu, he took this new role in his stride. The following year he went to Pondicherry to learn French and since then has served as an exclusive guide for French tourists. However, in recent times with a dip in the arrival of overseas tourists, he faces another crisis. But his heart is still in Sariska. He hopes that someday he can find a job with a long-term research project in Sariska, so that he can get back to exploring the Aravallis. Mangu Singh Shekhawat is an exceptional case. He is educated, resourceful and versatile – he will adapt and survive. But, for most other field assistants, life is tough after projects wind up. They, having spent their prime years doing little else but assisting researchers, suddenly discover that their special skills can no longer earn them a living, and it’s too late in life to learn another trade. Taking a cue from Mangu, field assistants with their uncommon abilities can make excellent naturalists, given some training and support. Their abilities could come in handy if they find employment in tourism or forest departments. We are happy that Mangu Singh managed to overcome a livelihood crisis. But the research community is definitely the loser. Losing such trained and committed people to other professions is also a major loss for conservation in these regions, and we need to think of ways in which to address these issues. Mangu and other talented field assistants are worth a lot more than just a passing mention in the Acknowledgement sections of scientific papers.

Raman Kumar (cyornis@gmail.com) is a PhD student at the Centre for Wildlife Studies, Bangalore, India.