There used to be a time when lifestyle started from the soil and went back to it. Most items used in Indian homes were completely natural and hence, compostable. Compost was a daily reality, without language or explanation necessary. But nostalgia can be dangerous, for it lacks context.

Australia has just experienced an unprecedented wildfire season. The state of New South Wales on the south east coast, where I live, was the worst affected, recording the worst bushfires since colonisation. The Gospers Mountain fire was the largest recorded forest fire in Australian history. These fires coincided with the most extreme weather conditions on record. Nationally, Australia experienced the hottest day on record, with a national average of 41.9 degrees on December 18, 2019, the hottest December on record, and the hottest and driest year on record. On January 4, Penrith, a suburb of Sydney, had the highest temperature anywhere in the world of 48.9 degrees.

Those climate conditions, combined with the radical social and landscape changes wrought by 242 years of colonisation, have made Australia now critically vulnerable to large scale wildfire. Incongruously, a prosperous nation with a small population which you might expect to be able to shield itself from the effects of climate change, is now very exposed. Perhaps not so ironically, Australia is the world’s largest per capita emitter of greenhouse gases, a direct contributor to creating the conditions for the fires.

Estimates suggest that possibly one billion individual animals (mammals, birds and reptiles) died in the fires. Some of those belong to species also likely to have been edged closer to extinction. Australia already has the worst record of mammal extinctions in the modern world – since colonisation commenced in 1788, thirty land mammal species have become extinct.

Nearly 6 million hectares of temperate broadleaf forest have burned in eastern Australia this past summer. That is more than 20 percent of that global forest biome type within Australia, and is a far higher annual percentage than usually burns (globally between 5-10 percent). Many of these ecosystems have evolved with fire, so now, a month or so after the fires and with widespread rain, extensive regeneration is evident.

While many species in Australia co-evolved with fire, the unique nature of this summer’s events has particular challenges. The sheer scale of these fires reduces the possibility of pockets of refugia from which surviving wildlife can repopulate burned areas. For many species, in-situ survivors for animals, and seed banks for plants, can be key to fire recovery. But the intensity of these fires means small refugia (fallen logs, burrows, deep soil) is less available – in many places, everything burned, including swamps and normally wet rainforests. Human infrastructure – roads, fencelines, agricultural fields – also creates barriers both for animals fleeing fire and animals subsequently trying to move into burned and unburned areas. Plants have different strategies, and in a scoping exercise one month after the fires I observed regeneration from seed banks; from epicormic growth on scorched mature plants; and lignotuber growth on apparently killed mature plants. I saw active wombat burrows in otherwise blackened landscapes, much insect activity, and also evidence of
introduced predators, particularly red fox. 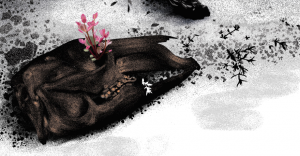 Captain James Cook, the naval captain who illegally ‘claimed’ Australia for the British Crown in 1770, made numerous diary entries recording his observations of smoke and fire on the continent: his words form the title of this article. He was one of very many colonial observers to see the activities of Aboriginal communities in effectively using fire to care for the country.

This summer’s bushfires are unprecedented in many ways, and perhaps that includes marking the point where mainstream Australians change their thinking about this country. Is this a pivotal moment in Australia’s environmental and post-colonial history? Is this the moment when Australians recognize the expertise of the people whose culture and knowledge prevailed for 99 percent of the continent’s human history? Can we have a different kind of fire in Australia?

Michael Adams is Associate Professor in Human Geography at the University of Wollongong, Australia.

Aindri C. is a communication designer specialising in animation and narrative illustration. She is a member
of Kadak, an online collective of women graphic artists.