Throwing shade at the wrong tree

For nearly a century, conservation across much of the world focused on creating people free enclaves, typically national parks and sanctuaries. In recent decades, there has been increasing recognition one cannot rely completely on these conventional protected areas to preserve diversity. Given current
human population sizes and growth rates, it may not be feasible, or fair, to substantially increase the area under reservation or restoration, since many biodiversity rich areas coincide with where the world’s poorer communities live. This has led to the development of alternate conservation approaches,
which include greater empowerment and participation of local communities. Thus, human-dominated areas, particularly matrices which include both natural areas and agricultural lands, are set to play an increasingly important role in long-term biodiversity conservation.

The agricultural matrix has, in particular, received a lot of attention in last couple of decades as an opportunity for the protection of biodiversity, since it covers 38 percent of land worldwide. In the Western Ghats, coffee plantations cover approximately 3600 km2; they have traditionally been almost entirely
shade-grown. Throughout the tropics, such traditional agricultural practices which incorporate trees are found to be compatible with the conservation of native biodiversity. Coffee plantations in the Western Ghats region provide habitat for some species as well as increase the overall connectivity of natural
habitats considerably. Given that they provide significant support for biodiversity, these shade coffee plantations provide excellent opportunities for the conservation of wildlife outside protected areas.

While national forest laws and policy were implemented after independence in 1947, whereby State-owned forests were managed by the Forest Department, indiscriminate felling of trees continued on private lands, resulting in the loss of timber and soil erosion in hill areas. To prevent this and promote conservation of trees in private areas, the Tree Preservation Order was issued in various states in 1952. This prohibited the felling, lopping or wilful destruction of native trees. Various states then enacted tree preservation legislations including Tamil Nadu, Maharashtra, Karnataka, Goa, Kerala and Delhi.

The Karnataka Preservation of Trees Act, 1976 provides for the preservation of trees in the state by regulating the felling of trees and planting of adequate numbers of trees to ‘restore ecological balance’. There is a provision for the appointment of a ‘tree officer’ by the Forest Department and a ‘tree authority’ for each urban and rural area, whose duty is to preserve all trees within his/her jurisdiction. The tree officer is supposed to carry out a census of existing trees and specify the minimum numbers and kind of trees that each region and land type should have. In specific cases, however, the ‘tree authority’ can grant permissions for tree felling.

All this sounds good for native trees, which should have positive outcomes for the preservation of genetic diversity, local forest types and habitats for other species. However, over the years, this did not play out quite as expected. For example, there were other simpler ways for acquiring permits for timber harvest. One coffee planter said:

Silver oak is free. No permit required for its harvest. But we need a permit to transport it. Also, jungle wood harvest is a problem. It takes long time to get permits [for it]. For us it is difficult to deal with the Forest Department. So we just give a contract to timber agents. These agents are very efficient at getting permits. They have got a fixed ‘cut’ for each level, starting from the top till the guards. They have got things under control. 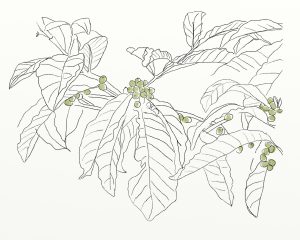 The Act provides for an annual tree census to be conducted in all private properties as a means to keep a check on violations of any of the provisions of the Act. However, the managers reported that the census of trees had never been conducted in the estates. One of them said:

If there is excess shade, we need to remove it. Timber from silver oak is sold in the market and jungle wood is used as fuel wood by our labourers. It is part of shade management. But we have no need to worry, as no officer will come to check in the estates.

A young planter, one of the few who was well-informed about the Act, pointed out that the KPTA provided for a decision on an application for timber harvest within a three-month period, but he had been waiting at least 18 months for permission to harvest an old rosewood tree. However, the most interesting response came from an elderly owner of a very large plantation:

For us there is a totally different procedure for timber harvest, one just needs to pay some bribe and in case of valuable trees like rosewood, give them their share of timber too.

There was very low awareness among the planters about direct implications of the Act on the management of coffee plantations. While all plantation owners interviewed knew about the existence of ‘some tree law’, very few understood its details. In the absence of the tree census, there was no way that the Forest Department could determine non-compliance of the law.

Most ironically, due to the constraints imposed by the law on felling native trees, private land-owners planted more non-native timber species. Thus, a law that was intended to protect native species actually had the opposite effect and has led to a decline in native species in human-dominated landscapes. Others have found a similar situation in Kerala, where the Tree Preservation Act actively discourages planters from growing native trees on their land.

There can be many gaps between policy and practice. Policy can be poorly framed or implemented. But in the case of tree preservation in these states, while there was also poor implementation, the perverse consequence (of leading to more non-native trees) has been a greater failure. If human-dominated
landscapes, especially those with the potential to be biodiversity friendly (like coffee) are to contribute to conservation, policy needs to be framed in a way to incentivise landowners to promote native biodiversity on their properties.

Archana Bali was a conservation scientist who worked in India and Alaska. She received her Ph.D. posthumously from the University of Alaska, Fairbanks, USA.

Kartik Shanker is Faculty at the Centre for Ecological Sciences, Indian Institute of Science, Bangalore and Founding Trustee of Dakshin Foundation, Bangalore.

Sawani Kumar is a communications designer who loves to paint, draw, and write about the more vulnerable aspects of daily life. Her dream is to be able to work for and from the Himalayan region.