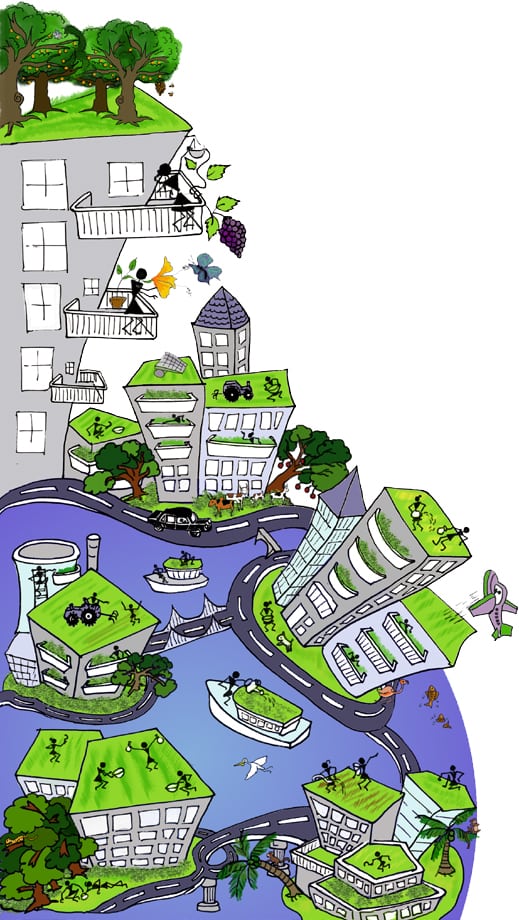 In the 1940s, Isaac Asimov invented Trantor, the center of a Galactic empire where his brilliant “Foundation” series of novels unfold. At its height, Trantor is a planet whose originally Earth-like land surface is entirely covered in metal domes enclosing subterranean metropolises inhabited by 45 billion humans. That is over 6 times as many of us as are currently jostling for space on Earth. And, like one of our megacities writ large, Trantor is an entirely urban planet with an (eventually fatal) dependence on 20 other worlds for food.

No room for bare dirt, let alone natural spaces, within that Galactic capital! Not surprising, given that Trantor sprang from the imagination of a quintessential New Yorker, in a period of technological optimism about human potential for limitless growth to conquer the universe. Recently, as humanity nears 7 billion, we passed an urban threshold: over half of us now live in cities sprawling over the Earth’s landscape. Cities whose alienated dwellers depend on food from ever distant farmlands. But we remain far from traveling to another planet, let alone establishing galactic empires. Instead, as climate change destabilises agriculture and rising oceans threaten to drown some of our most vibrant cities, we worry about sustaining even current human populations.

Meanwhile, an alternative vision of humanity is found in the writings of Asimov’s contemporary Aldo Leopold who, in “A Sand County Almanac”, also written in the 1940s, gave us the “land ethic”: a natural extension of ethics, an evolution of our moral sense of just behavior towards the rest of the natural world. He wrote:

“A land ethic changes the role of Homo sapiens from conqueror of the land-community to plain member and citizen of it. It implies respect for his fellow-members, and also respect for the community as such.”

“A thing is right when it tends to preserve the integrity, stability, and beauty of the biotic community.It is wrong when it tends otherwise.”

One can see an amplification of this land ethic in the more recent notion of “Earth Stewardship” which calls upon humans to take an active role in protecting biodiversity as the planet’s only capable “stewards”.

Trantor, with its eradication of nature, would be deeply unethical. Indeed most of our cities seem to lie on the wrong side of this ethical line, containing more concrete and asphalt than biotic communities. Yet cities are also centers of human culture supporting much of the integrity, stability, and beauty of human communities. Indeed, cities are where we also grow most of our naturalists, ecologists, and environmentalists these days.

Is it possible to reconcile human communities with those other biotic communities as equal citizens of Earth? We need an urban land ethic to guide our actions, find ways to preserve the integrity and beauty of the whole, human and non-human, and avoid destroying the living fabric of Earth’s biosphere before we self-destruct.

Urbanisation is fundamentally changing the nature of our planet. Preserving biodiversity on this new urban planet requires going well beyond the traditional conservation approaches of protecting and restoring what we think of as “natural ecosystems”, and trying to infuse or mimic such elements in the design of urban spaces. Cities already represent a new class of ecosystems shaped by the dynamic interactions between ecological and human social systems. As we project the spread of these ecosystems across the globe, we must become more proactive in not only trying to preserve components of earlier ecosystems and biotic communities that they displace, but in imagining and building whole new kinds of ecosystems that allow for a reconciliation between human wellbeing and biodiversity.

While urbanisation displaces many species, we also know that others have evolved adaptive response in behavior and physiology to not only survive but thrive under the sometimes strange and rather sustained urban selection pressures. Novel plant and animal communities have evolved in urban areas, often with active manipulation and management by human society.

Urban residential gardens and parks, for example, have become an important reservoir for populations of bees and other pollinators that provide valuable ecosystem services for farmers, but find it difficult to survive under modern intensive agriculture. Innovations such as rooftop gardens and vertical forests, other structural design elements that form the scaffolding of urban habitats, and human interventions such as supplementary feeding and watering, have the potential to offer novel habitats and niches for species that may be quite different from those in more natural ecosystems. Populations and assemblages of species that evolve under such urban conditions may well represent what the future holds for much of earth’s terrestrial biodiversity. As such, human society must take a more active role in understanding and shaping these ecosystems, and assume the mantle of Earth’s stewardship in the deepest sense.

As centers of human innovation, and perhaps the most active frontier of our impact on the planet, urban areas offer enormous opportunities to re-imagine and invent a different kind of future with room for humans and other species to thrive. As humanity continues to grow and build cities, our hopes of avoiding urban collapse lie in growing movements for green roofs, urban farming, alternative materials, and landscape designs that soften our hard urban edges, and offer novel habitats for even endangered species, by making cities more permeable to nature.

Even Asimov, in sequels written decades later, recognised the hubris and ecological folly of a wholly metallic urban planet, adding farm sectors open to the air, and even dirt and trees growing atop the metal domes! It is in the nature of life to colonise and adapt to new habitats, so in the long run, the evolutionary biologist in me knows that the earth will eventually reclaim all of our novel habitats as its own, even if we kill off many species and ourselves in the process. We would all be better off in the short run, however, if we allow nature and its biotic communities some more breathing room within our urban realm.We must heed Leopold and spare our planet the fate of Asimov’s Trantor. Even Asimov would have agreed.