I first visited the mass nesting beaches of olive ridley turtles in Gahirmatha, Orissa in 1997. We were a large group of international participants in a sea turtle workshop in Bhubaneshwar. We were hosted for two days by Bivash Pandav, a young sea turtle biologist with the Wildlife Institute of India. On Babu Bali or Long Wheeler Island, Bivash had his field camp with a team of dedicated field assistant, boatman and cook. Two years later, I returned as a post-doctoral fellow with the Wildlife Institute of India, to initiate a project on sea turtle genetics, and spent several weeks at the camp. This time, I got to know the team a lot better. There was Madhu, the cook, and majordomo of the camp. The boatman (Subash) and the rest of the team (Kalia, Siria and Sahadev) were proficient ‘turtle fishers’. Bivash wanted to work on mating pairs, and they had devised a triangular net with which they scooped the mating turtles out of the water. In three years, they tagged nearly 1700 mating pairs from the offshore waters of Gahirmatha. They also tagged several thousand turtles on the nesting beach. Without his dedicated band of followers, little would have been possible.

Later that season, I visited Bivash’s camp at the Devi river mouth. There, a young schoolboy named Bichitrananda Biswal (Bichi) was trying to impress upon Bivash his interest in sea turtle conservation. Along with Tuku, Tulu and Bishnu, Bichi kept track of the dead turtles that were getting washed ashore the Devi coast in large numbers and helped Bivash in tagging turtles during an arribada that took place near the Devi river mouth in March 1997. After working at his camp for three seasons, Bichi kept his interest in turtles alive, working for Operation Kachhapa and the Forest Department. Eventually, he would start his own NGO, Sea Turtle Action Programme (STAP). Today, STAP is a part of collective sea turtle conservation projects in Orissa, and Bichi an active participant. Turtles still continue to die in large numbers along the coast of the Devi river, and Bichi still continues to keep track of them, keeping the issue alive. 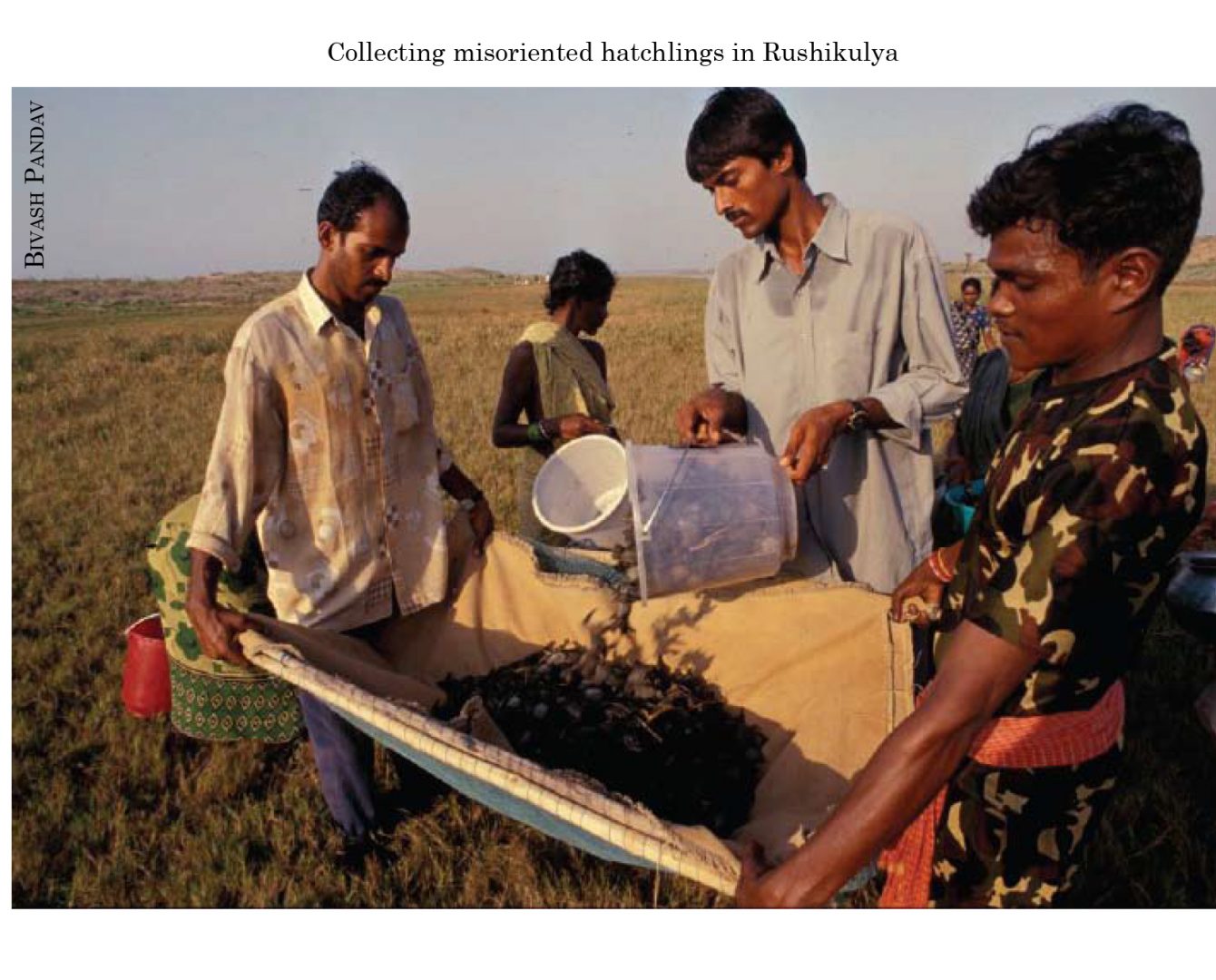 Further south, a similar band of turtle followers were initiated into tagging and counting rituals at Rushikulya. This mass nesting beach was only discovered in 1994, during one of Bivash’s surveys of the Orissa coast. Rabindranath Sahu was the fiery leader of this group. After working for Bivash, some of the boys worked briefly for Operation Kachhapa. During the mid-2000s, they assisted Basudev Tripathy with his fieldwork for his PhD and in turn, Basu helped them get a grant to build an interpretation centre and start their group, the Rushikulya Sea Turtle Protection Committee (RSTPC).

One of the major problems in Rushikulya is light pollution from a nearby highway, aquaculture farms and a chemical factory. Each year, when hatchlings emerged after mass nesting (millions at a time), most would be disoriented and end up in the vegetation behind the beach. Rescue missions were organised involving local volunteers, but hundreds of thousands of hatchlings still died, and even those that were rescued were probably weakened, soon to be devoured. While the biologists – Jack Frazier and Bivash amongst others – posed the idea of a barrier, and suggested the use of empty cement bags, one of the members of the group, Damburu, then came up with the idea of using a fence made of fishing nets, behind the mass nesting area. With funding from WWF and other agencies, for years, this barrier served to prevent hatchlings from straying away from the beach and getting killed. Today, members of the RSTPC run the interpretation centre at Rushikulya, participate in state conservation activities, spread awareness in local schools and assist researchers who work on sea turtle biology at the site, in addition to their own ongoing monitoring.

Many of them continue to work on research projects as field assistants. Ganapati helped Divya with her Masters dissertation and continues to work on our projects. Suresh, who is the latest to conduct Doctoral research on ridleys in Orissa, has a dedicated group of field assistants, including Damburu, Shanker, Surendra, Madhu and Kedar. His boatman, Sri Ramalu, has now worked for several years in turtle projects. Despite being hearing and speech impaired, he is gifted with an acute sense of sight and does not miss even a single surfacing turtle in the featureless seascape. His ability to get the boat through the river mouths where the breakers come crashing down, and manoeuvring through rough seas nonstop for six to seven hours are invaluable. Without his enthusiasm, hard work and skills, all the offshore studies would be much the poorer.

For all those who helped with sea turtle projects along the Orissa coast over the years, the projects have been a significant source of income even though the activity is only seasonal. With fish catch declining over the years, many other local fishermen now eagerly look forward to working in turtle projects. Some of them even want to work without pay in order to gain experience so as to get included in the future.

From retired residents on the coast of North Carolina, to indigenous communities in the Torres Strait, sea turtles have attracted an incredible variety of dedicated conservationists and volunteers across the world. In India, students, fishing communities and animal activists have all become involved in sea turtle conservation across the coast, some for more than twenty years. The groups in Orissa had a different origin, working as field assistants in sea turtle research projects. They have helped with three Doctoral (Bivash, Basu, Suresh), several Masters dissertations (Karthik Ram, Basu, Divya, Murali) and several research and conservation projects. Together, the projects have involved the monitoring of nesting beaches, offshore distributions, arribada census, hatching success, tagging, genetics, and satellite telemetry, covering a fair range of research that is carried out on sea turtles. And now, these field assistants turned conservationists have a significant role to play in the conservation of these animals and their coastal and marine habitats, not just in Orissa, but across India.

Kartik Shanker (kshanker@ces.iisc.ernet. in) is Assistant Professor at the Centre for Ecological Sciences, Indian Institute of Science, Bangalore, India, & a Trustee of Dakshin Foundation, Bangalore, India. 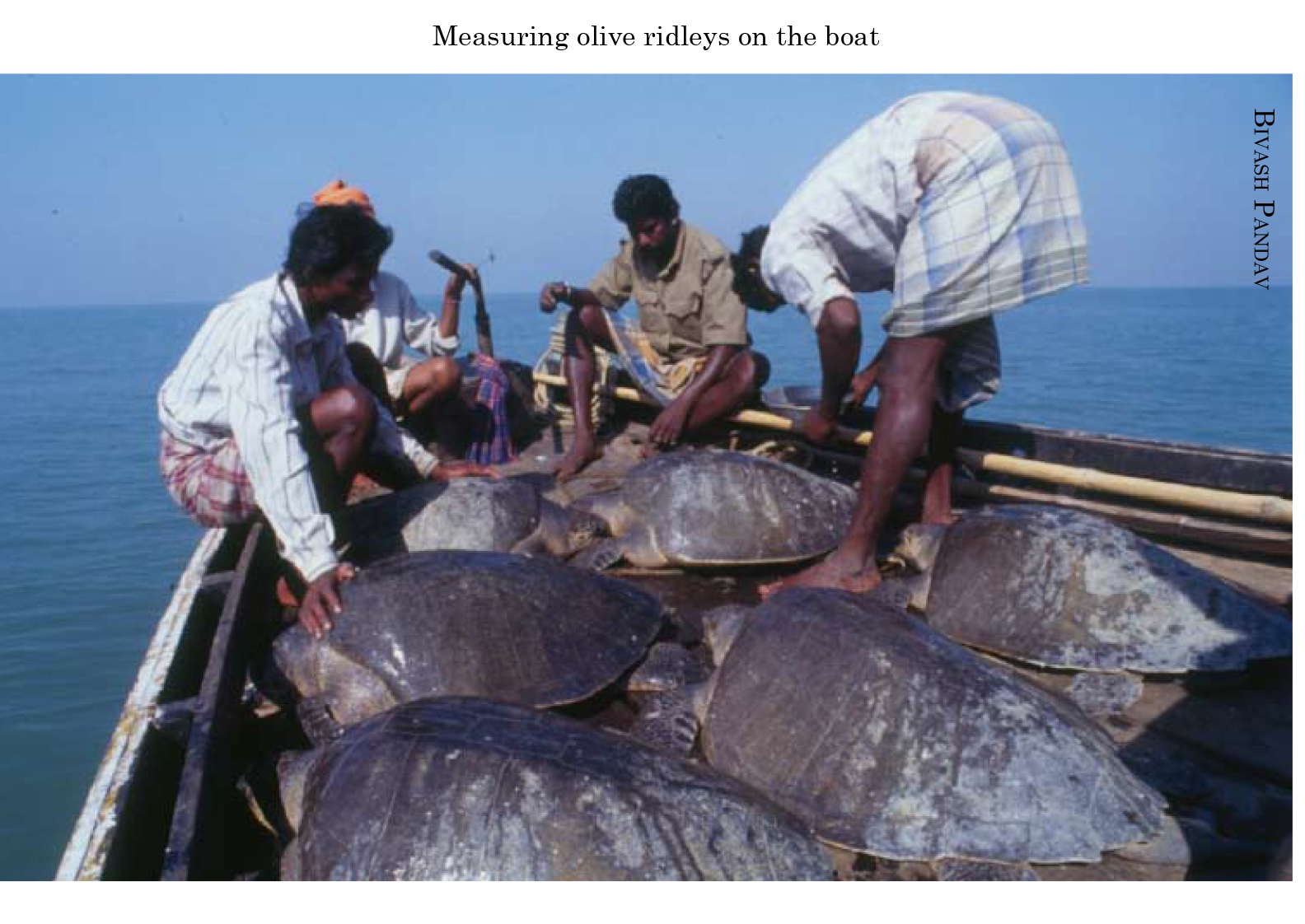