Turtles left out in the cold?

For species of conservation concern, rehabilitation of sick or injured animals is often done with little reflection of where it fits into the larger plan of conservation actions. 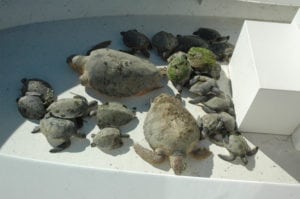 The cold wind whipped across the sound, creating little white-capped waves in an area that normally is so calm that the locals often call the waters “slick”. I was waiting for a park ranger to arrive with some hypothermic (or coldstunned) sea turtles that had been found alive but beach-stranded and lethargic. In warmer months, these sheltered waters are often thick with juvenile sea turtles that come to forage on abundant prey. However, when colder winter weather arrives, the turtles sometimes cannot leave quickly enough through the limited number of inlets, and being reptiles, they may easily succumb to hypothermia when the sound’s waters drop in temperatures. The boat arrived with 35 turtles and I stacked them in their various containers in the back of my work truck, before driving them to a wildlife veterinarian for assessment and initial treatment with fluids, antibiotics and anything else they may need. Over the course of a few weeks, we will receive over 150 live hypothermic turtles from a small part of the coast.

Not all hypothermic turtles survive, but most do if they receive appropriate care soon after being found. Many turtles will return to full health in 2 weeks or less, while others may need longer, particularly if they had any complications related to the hypothermia, such as pneumonia or eye damage from cold air or wind-blown sand. Often, the most difficult thing in managing hypothermic sea turtles is finding sufficient space for them during their rehabilitation. When several hundred live hypothermic turtles appear in a small area within a few weeks of each other, it can be difficult to find adequate space for them to recover. Often, sea turtle rehabilitation facilities, many of them volunteer-based, will go above and beyond what seems feasible to make room for as many turtles  as possible. Following this, another major problem is what to do with the turtles that have recovered. Often, coastal water temperatures remain cold for several months, so the turtles cannot be released from the beach without running the risk of more hypothermia. Thus, apart from waiting for late spring or summer to release the animals, the only option is to transport the turtles to warmer waters for release, either by boat to warmer waters far offshore, or by truck or airplane to coastlines closer to the equator. In recent years, some hypothermic turtles from the UK and other European countries have been flown to the Canary Islands or the US for release following rehabilitation. 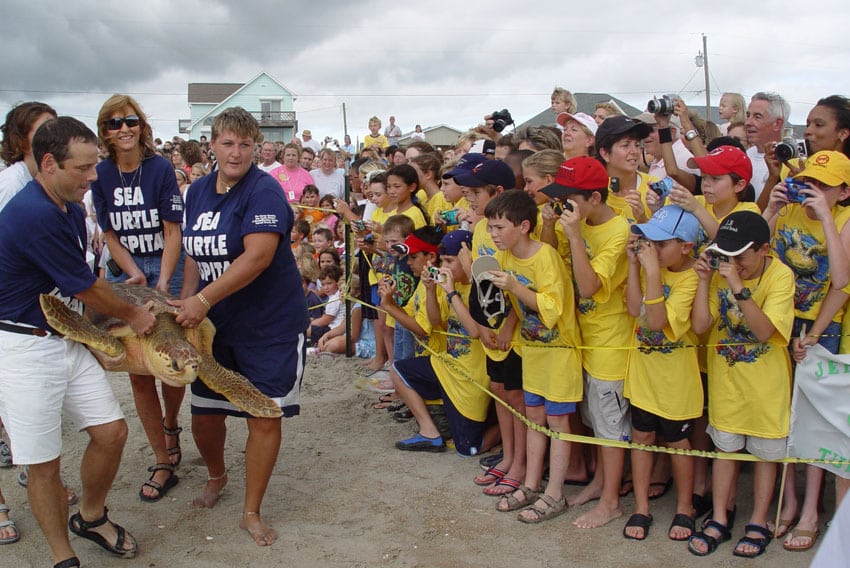 During the releases of turtles rehabilitated from hypothermia, there is often media attention and the resulting coverage often implicitly or explicitly states that these actions are helping save sea turtles. Strictly speaking, I agree that the individual turtles with hypothermia have been helped, but I wonder about the impacts of these actions on the larger populations of sea turtles. When hypothermic turtles appear on the coast, especially in large numbers, most people involved view it as a crisis that needs immediate response, and there is little time for reflection about what the end goals are (apart from ensuring the animals receive appropriate care). However, given the vast amount of resources expended in responding to and treating cold-stunned sea turtles, it is worth considering whether these are important conservation actions. I do not have the answer, but would encourage the discussion begin with these considerations.

Hypothermia in sea turtles is natural. Although many often consider sea turtles to be tropical or subtropical species, they can and do migrate to more temperate zones, presumably to take advantage of better foraging habitat. Hypothermic turtles regularly appear each year at higher latitudes, and regularly occur every few years even at middle latitudes. There also are historical reports of cold-stunned turtles appearing in various places in the US over the past century (e.g. Witherington & Ehrhart 1989), confirming that it is natural. Should there be an effort to try to reduce a natural source of mortality, such as hypothermia? Or should more effort and energy be focused on anthropogenic sources of mortality or other threats? This type of cost-benefit analysis question could (and should) be applied to any conservation action, although there are few examples where responding to hypothermia is considered. Two notable exceptions are the recent US Recovery Plans for loggerhead and Kemp’s ridley turtles, although no specific recommendations are made for whether or how much action is needed in response. Of course, some may argue that treating hypothermic turtles is good because it is a threat that can be mitigated, thereby increasing the resiliency of the population to respond to threats that we cannot mitigate. This may indeed be the best course of action, but it would require a larger discussion about all threats and responses, and include cost-benefit considerations.

We have little information about the status of coldstunned sea turtles that have been rehabilitated and released. Some short-term satellite tagging of some turtles has revealed that the individuals appear to survive for at least a few months after release (until the tag stops working or is shed). However, there are no long-term data showing that rehabilitated hypothermic turtles have contributed significantly to larger wild turtle populations. There are anecdotal records of released individual animals subsequently succumbing to hypothermia again at later dates, which reinforces that hypothermia is a natural event and calls into question whether a response is warranted.

Responding to hypothermic turtles does have other types of value. For example, because these events tend to attract media attention, it is an opportunity to increase public awareness and facilitate increased understanding of sea turtle biology and conservation. Cold-stunned turtles offer research opportunities, including health and physiological studies, sampling for foraging ecology, and assessing post-release outcomes (although the latter remain difficult to successfully complete). But none of these actions directly benefit wild populations of sea turtles, and when presenting information to the public, more effort should be made to distinguish between benefits to individual turtles vs. the wild population as a whole (see Loftin 1985). It is likely that many of the current actions in response to hypothermic turtles are driven in part by public perception of sick or injured animals and a general desire to have something “done” about it. If so, then a wider public discussion about threats to populations and impacts of responses is warranted, so that everyone has a better understanding of the different factors influencing turtle population. From there, we can prioritise actions, including responses to cold-stunned turtles. I am not recommending that they simply be left in the cold but rather we need to consider how much time and energy should be spent responding to them and if necessary, divert some of that to other threats that potentially could have greater impacts on wild populations.

Matthew Godfrey works for the North Carolina Wildife Resources Commission and manages their sea turtle conservation programmes. He has over two decades of experience in sea turtle biology and conservation. mgodfrey@seaturtle.org