What’s in the Genes: The molecular age of avian malaria 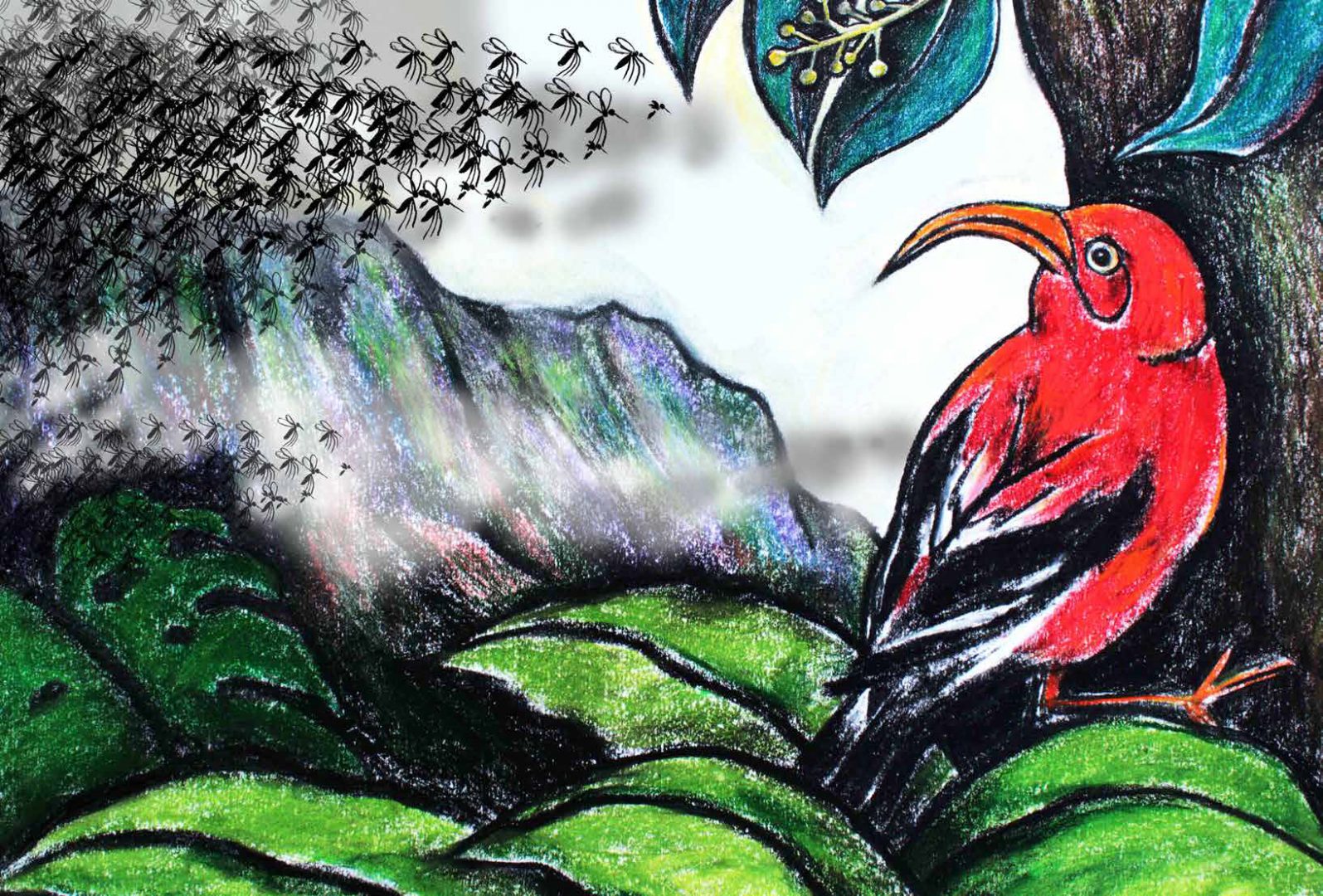 When we think about malaria, we immediately think of human beings—people in the tropics being bitten by mosquitoes, and getting consumed by malaria afterward. We rarely make a mental connection between malaria and birds, yet malaria parasites influence virtually all aspects of their avian hosts’ lives. I have been studying the effects malarial infection can have on bird populations, in susceptible ecosystems like the Hawaii archipelago.

Although the word ‘malaria’ has previously been used to refer to any type of infection caused by a blood parasite, we now use the term commonly to indicate infections originating from the genus Plasmodium. Parasites from both this genus and Haemoproteus are cosmopolitan (except for Antarctica), and have been reported from a broad range of bird species. These parasites are transmitted between hosts through vectors; Plasmodium species use mosquito vectors, whereas Haemoproteus species prefer biting midges from the genus Culicoides (Diptera: Ceratopogonidae) and louse flies (Diptera: Hippoboscidae).

Avian malaria is closely related to human malaria, but unlike the human form, it is not strictly a tropical disease, and is found in many temperate birds. With recent advances in molecular genetics techniques, an astonishing diversity among blood parasites has been revealed–much of which was not evident from morphology alone. In addition, the majority of distinct lineages identified from mitochondrial DNA sequences have been shown to represent reproductively isolated entities–effectively, biological species. It has been suggested that there might be as many lineages of parasites as there are species of birds!

The severity of malarial infections in bird populations depends on whether the birds have encountered the parasite previously during the course of evolutionary history. In island systems like Hawaii, which have been isolated for millions of years, birds have evolved in blissful oblivion, without any exposure to the malarial parasite. However, in areas where malaria is found, like in Asia, some birds have been co-evolving with the parasite.

When malaria reaches where it’s never been before

Islands in the Hawaiian archipelago are a classic example of how biological invasions can have a profound effect on endemic species (those that are found only in one area and nowhere else in the world). These islands have been isolated from the mainland for many millions of years. Geographical isolation and colonisation from the mainland facilitated the evolution of countless unique lifeforms–including, for example, the Hawaiian honeycreepers. The absence of disease-causing agents has been suggested as one of the reasons why such a diversity of life forms is often found on isolated islands. Based on fossil evidence, the Hawaiian Islands were once home to more than 100 endemic species and subspecies of land and water birds.

However, things changed in Hawaii when the Polynesians, and later the Europeans, landed in the late 19th and early 20th centuries. Numerous birds from different continents were introduced to the islands. At least 17 bird species new to
Hawaii became established in forest habitats after this initial introduction. The malarial pathogen (Plasmodium relictum capistranoae) was probably present in some of the introduced birds. For forest-dwelling native birds, the accidental introduction of mosquitoes (not to mention additional diseases such as avian pox and avian malaria), have had extremely negative consequences.

Across the mountains of Hawaii, birds, mosquitoes and avian malaria seem to be playing out a predictable drama. At lower elevations, there are many introduced bird species and almost no native Hawaiian bird species. The introduced mosquito, Culex quinquefasciatus, abounds in these areas. The introduced birds, however, are resistant to malaria. Malaria in the low elevations is only found in native Hawaiian birds that have somehow survived the infection–malaria prevalence is very low. As you go higher into the mid-elevation forests, the prevalence of malaria increases in native Hawaiian birds. Even higher up the mountain, abundances of both the mosquito and the Plasmodium decline due to the lower temperatures, and native Hawaiian birds are free to thrive and reach their peak numbers. Some of the native birds also escape to higher elevations to escape from the parasites. Introduced birds seem to be doing rather well, with no mortality.

Introduced birds seem to be doing rather well, with no mortality.On the other hand, 50-90% of the endemic Hawaiian bird species are dying out. There could be many other factors causing extinctions of these native birds, but avian malaria is believed to be one of the key reasons behind the crash of bird populations in the otherwise very suitable lowland and mid-elevation habitats.

There is an exception to every rule, and this case is no different. In the Hawaii amakihi (Hemignathus virens), a species of Hawaiian honeycreeper, malarial infections affect the survival of adults. However, the disease does not affect reproductive success or prevent populations from growing. Most other native bird species are on the decline in the forests of Hawaii, but the amakihi appears to be evolving tolerance to infection: Lowland populations have rebounded dramatically in recent years.

When malaria gets into an arms race

The effect of malaria is quite different in locations where avian malaria parasites have been living for millions of years. If Hawaii is considered to be one end of the disease spectrum, the Asian mainland— where there is a long history of hosts and parasites co-evolving and engaging in arms races—is an example of a counterpart at the opposite end.

Even in areas like the Western Himalaya, where resident species (non-migrant species) might have been exposed to malaria before, there can be scenarios where the parasite can result in the sudden emergence of disease epidemics. This can happen because a new host (the endemic birds) is exposed to a parasite (the Plasmodium) to which it has no protective immune response; this is similar to what happened in Hawaii. Alternatively, a parasite can gain increased virulence (the power to infect) by various means, like mutations. Or, a change in the environment can affect the equilibrium that was established between the host and parasite over millions of years. For example, a change in climate may result in a longer transmission season to which birds might not be able to adapt quickly enough. New climatic conditions can also result in the spread of the parasites into new habitats where they may encounter new, susceptible hosts.

Hitching a ride with migrating birds

Some birds travel great distances on their migratory journeys, and carry their parasites with them when they head back from their warm wintering grounds. The role of migratory birds in the spread of diseases between regions has been widely documented. However, journeys between different altitudes in the same mountain range, and whether parasites also travel, have not been documented. Migrants move between altitudes or down to the plains, and thereby encounter more diverse faunas of parasites compared to their non-migratory counterparts.

In the plains, the resident birds may act as reservoirs for blood parasites, increasing the risk that migrants will become infected with new parasites on their wintering grounds. Insects are among the groups of organisms most likely to be affected by climate change, because climate has a particularly strong direct influence on their development, reproduction, and survival. Given that suitable vectors are present to transmit and maintain the infection, such migrants can form an effective bridge for parasites between wintering and breeding grounds. If the high altitude avian fauna has evolved in the absence of these blood parasites, their risk of infection is potentially increased.

Studies on human malaria have shown that climate change can alter both where Plasmodium is found, and how much of it is found in different areas. The period when the Plasmodium grows inside the mosquito is very sensitive to temperature; the development of the parasite is completely blocked below 15C. To make the situation even more complicated, the vectors that Plasmodium depends on for transmission are also affected by climate change. As the environment changes, some habitats that are currently too cool to sustain vector populations may become more favourable, while others that are drying may become less favourable for insect breeding. For instance, a small rise in in ambient temperature and rainfall can increase the breeding season of mosquitoes in a particular area. This can increase the time window of malaria transmission, resulting in a larger number of generations of parasites per year. 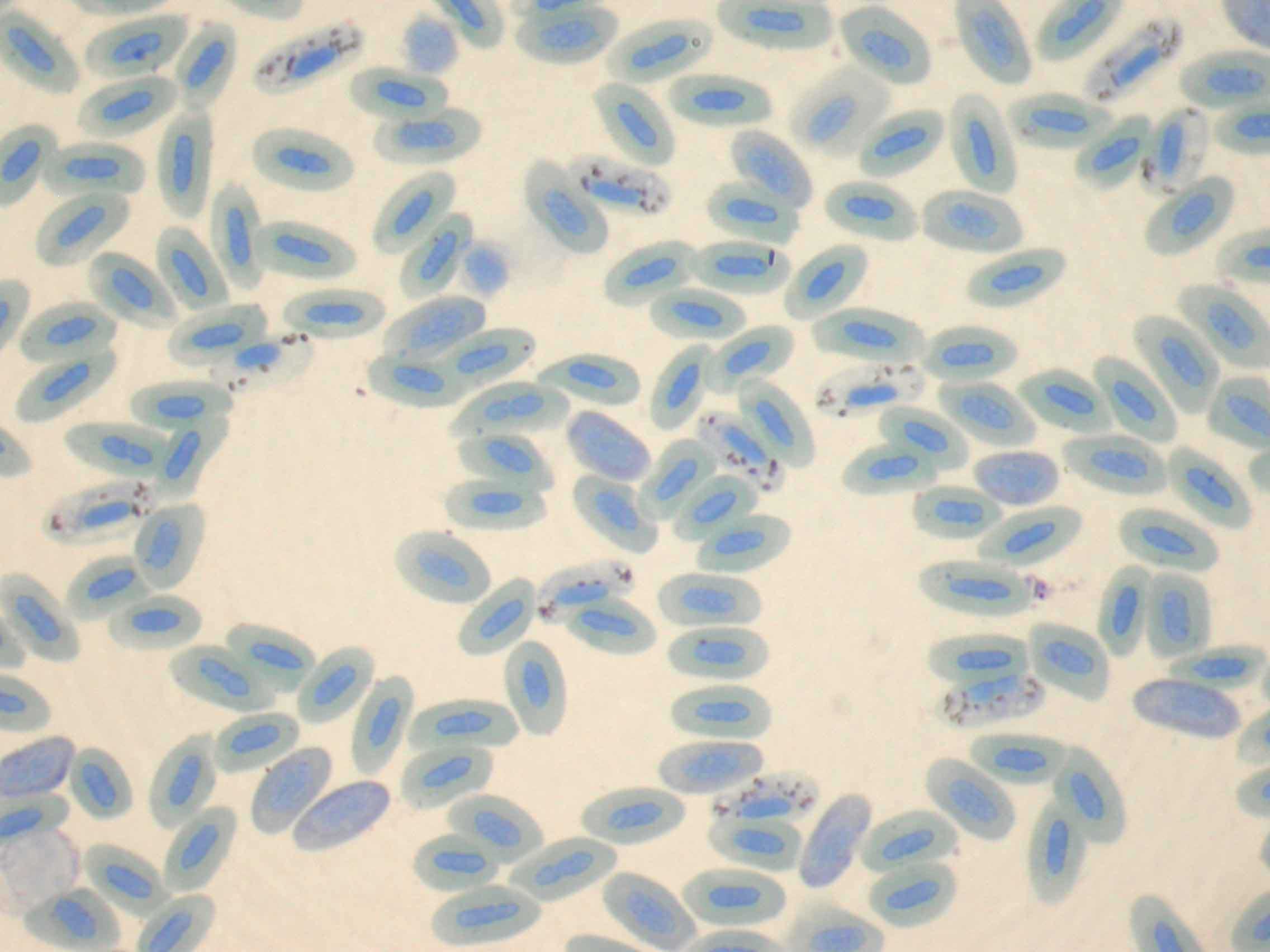 The Wellcome Trust-DBT India Alliance has funded a study of a possible altitudinal variation in the presence of avian blood parasites transmitted by vectors in the Western Himalayas. The main aim of the project is to study how changes in temperature, the community of insect vectors, the migration patterns of birds, and changes in habitat affect both rates of avian malaria infection, and its spread in high altitude areas that do not currently have malaria. The project focuses on the distribution of both Plasmodium and Haemoproteus blood parasites. It also studies the extent to which these parasites are exchanged between migrating and resident bird populations of Phylloscopus warblers (Leaf warblers) and Parus species (Titmice species) distributed across an altitudinal gradient, and how the vectors that carry these parasites between hosts are expanding to new areas in the Himalayas. The study is challenging because although we know the Western Himalayas are species-rich, the area is also relatively understudied, and there has been no research on the dynamics of the avian diseases and their vectors to date.

Across habitats as diverse as the tropical forests of Hawaii or the snow-capped peaks of the Himalayas, avian malaria parasites are important study systems for testing hypotheses about hostparasite evolution and ecology and the results of these studies have huge conservation implications for a variety of avian species. These findings can also be used to create models of the epidemiology of human malaria. Despite the similarity of disease susceptibility and transmission in humans and birds, birds may be easier to study because they are not subject to the complexities of human socio-economic and cultural patterns. Thus, they provide an excellent system in which to directly determine how ecological changes such as climate change, temperature, vector community, and habitat affect the prevalence and spread of diseases worldwide.