When an elephant dies

As tall as that tree
She walked,
Majestic!
Her trunk touched-
Those stars-
Blooming on the Acacia…
Her reflection,
Revamped that stream-
Yes,
She walked-
Majestic!
On this land-
Where lies her body-
Abandoned!

Not all natural phenomena and behaviors are pleasant to observe when we are in the wild. Most of the times, we are left startled and sometimes, even broken. Death is one of those things. Death has always been a crucial part of life and a harsh reality. Bereaved and lost, we stand when someone dies. In humans, we seek solace in lamenting over our lost ones and by being with our family members and friends. We try coming out of it. We divert our attention. However, someone close to us has become a memory. This is the hardest feeling to deal with.

Death, the cessation of all the fundamental functions in an organism, is a part of an ecosystem. Animals die. They get decomposed. And, on the same carcass, blooms another life of scavengers and decomposers. A new life begins. A loss for us is a gain for someone. The question then is whether animals are saddened by the deaths of their close ones. Elephants are! Known for their compassion, empathy, and emotional expressions, elephants too suffer when they lose someone in their herds. What happens when an elephant dies? It is physiologically proven that besides having strongly bonded families, elephants have larger brains with a highly complex hippocampus, bigger than that of humans and primates which aids them in building their memories and feeling emotions. This part of the brain is linked to their psychological state. Many studies highlight the psychological sufferings of elephants due to the stress of losing their close ones. I came across many articles about elephants being bereaved when they lost their members or when they are kept separated from their herds. When they come across the skeleton of a herd member they knew, they sniff and mourn their loss. There are hundreds of such scientific articles, anecdotes, and stories about elephants mourning death.

When I was in Hassan, a district in the state of Karnataka in India, I heard an anecdote about a dead elephant who was buried near a village and how a herd of elephants came to mourn that death.

Encountering something unexpected and unusual has always been the enticing perk of tiring days in the field. But not all of them were as tempting as I thought them to be. I have observed many incidences of killings and deaths in the wild- a ‘freshly’ killed spotted dear stolen by a pack of wild dogs, vultures clearing the flesh from a deceased bison’s ribs, the blooming growth of maggots in a partially decomposed elephant. All I observed of death was associated with animals being chased, attacked and flesh ripped off, something gruesome and unsavoury.

It was in a forested area of Karnataka, where I saw what elephants go through when someone they have been following throughout their lives dies. An old matriarch. It was then that my perception about death in the wild changed completely. The body of an old matriarch remained motionless on the floor of the forest with a few scavengers hovering over it. A young female from her herd most likely a daughter or a sister to the deceased female, started walking around her. Lowering her trunk, she kept periodically sniffing and lifting the trunk of the dead female. As per my observation, the old matriarch must have died a few hours ago. 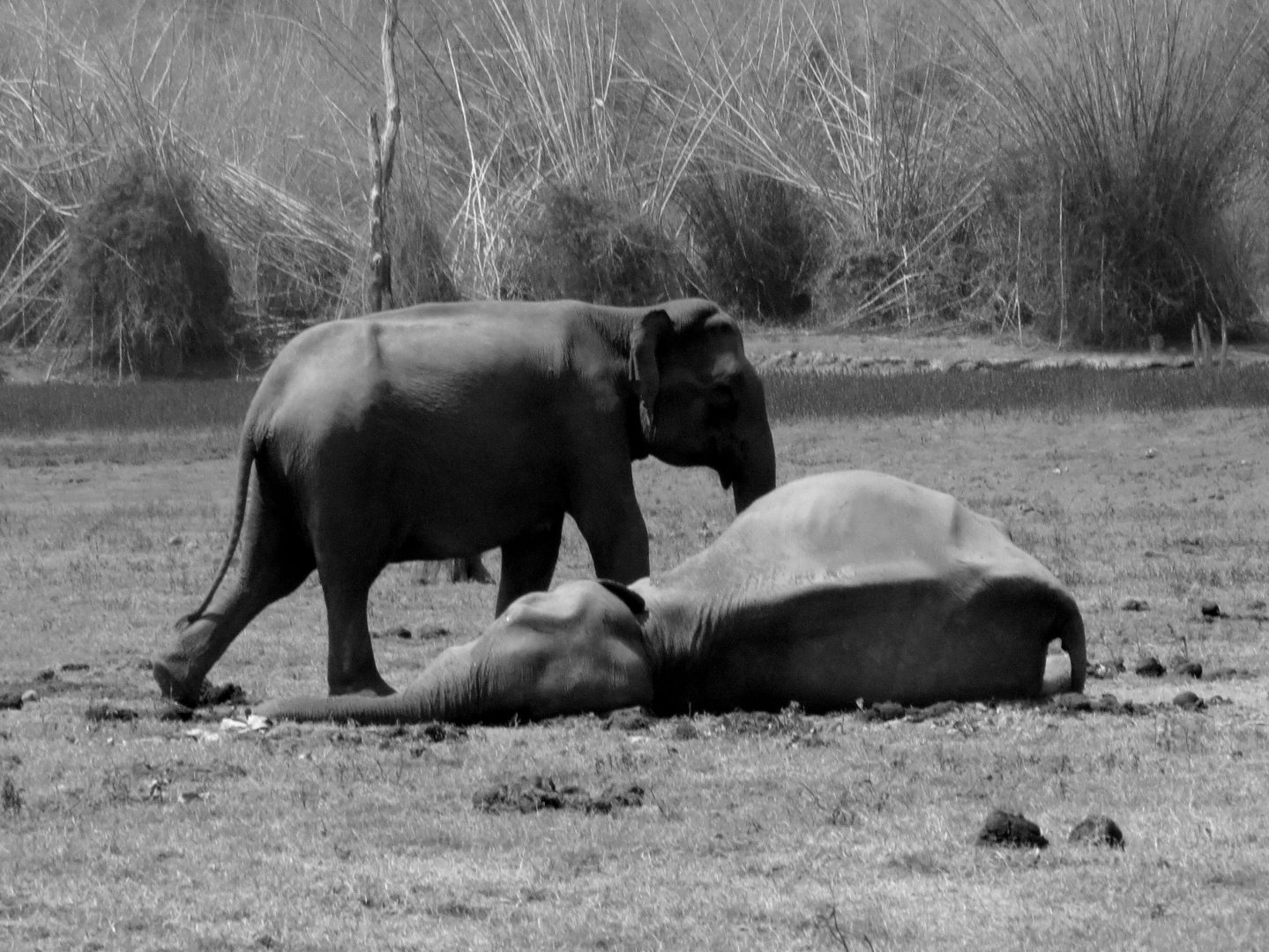 The feeling of loss in her expression was vivid. Her movement around the dead female- seemed to me like a funeral ritual from human society. Later, another sub-adult female joined her in this ‘ritual’. But she went back inside the bush instantly. Her sudden reaction puzzled me. I wondered if she had sensed my presence somehow even though I was behind a Lantana bush, a few hundred meters away. I, then, saw a herd standing near a bamboo bush. It was her herd. None of them had their ears spread out or trunk stretched high and that effervescence which they always carried was missing. A very distressing silence. It was moving for me as well. Even after I had moved on, the silhouetted images of silently mourning young females haunted my thoughts. 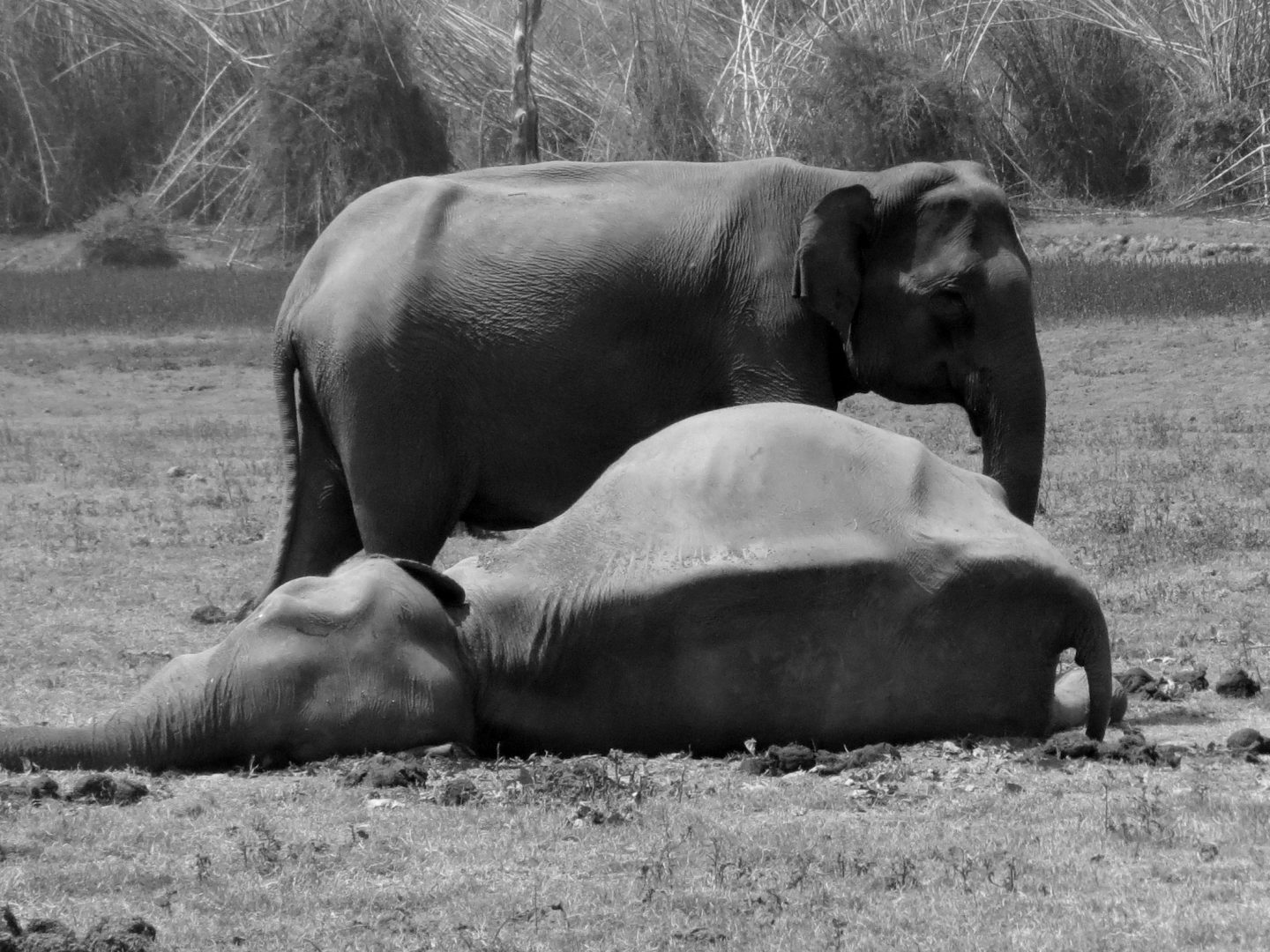 Later that day, I consulted a veterinary doctor from the forest department who confirmed that the death of the old matriarch was due to a severe intestinal infection. That was the day I observed that when an elephant dies, their family members go through an emotional breakdown. They too mourn the loss, like we do. They too console each other in their herd, like we do. This was the first incident that I observed in the wild which left me speechless out of grief. It has been well-documented that while elephants are in zoos, temples or captivity, they undergo depression-like symptoms and even PTSD (Post-Traumatic Stress Disorder) when their mates die. Sometimes it is so severe that they too even die.

This incident left me with a question; a question about their death. If elephants suffer immensely from the natural death of their family members, like in the above case, what might they be going through when family members die due to unnatural deaths such as in collisions, electrocution or retaliatory killings? Are we creating severe mental stress in these highly emotional and expressive animals. Could it be that when an elephant dies, there are other elephants from his/her herd who also suffer. This is the thought that still lingers in my mind. 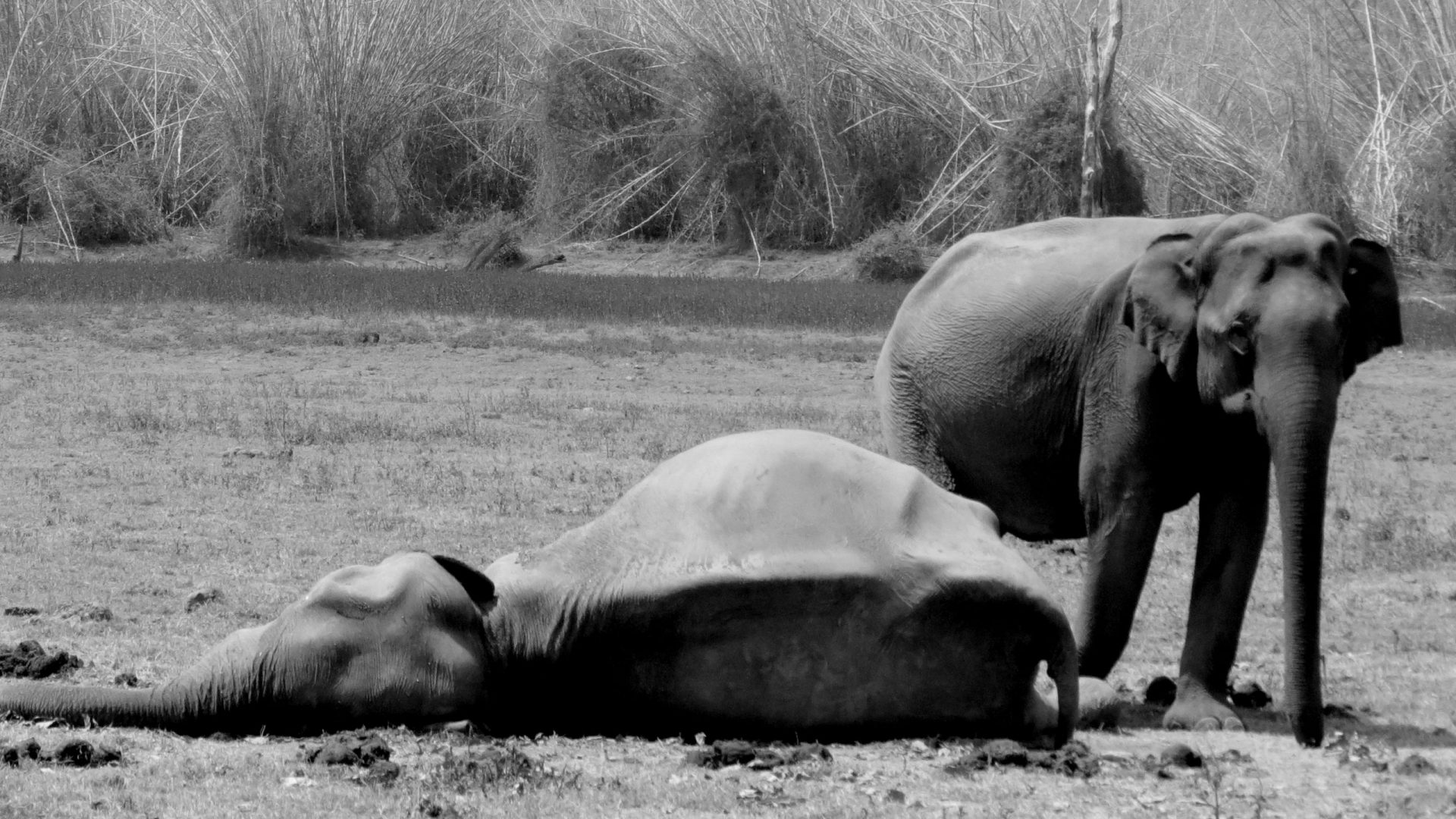 Dr. Sanjeeta Sharma Pokharel is an elephant biologist, who worked to understand the stress physiology in free-ranging Asian elephants. Besides being a researcher she is also a poet and a cartoonist.