When conservation clashes with culture 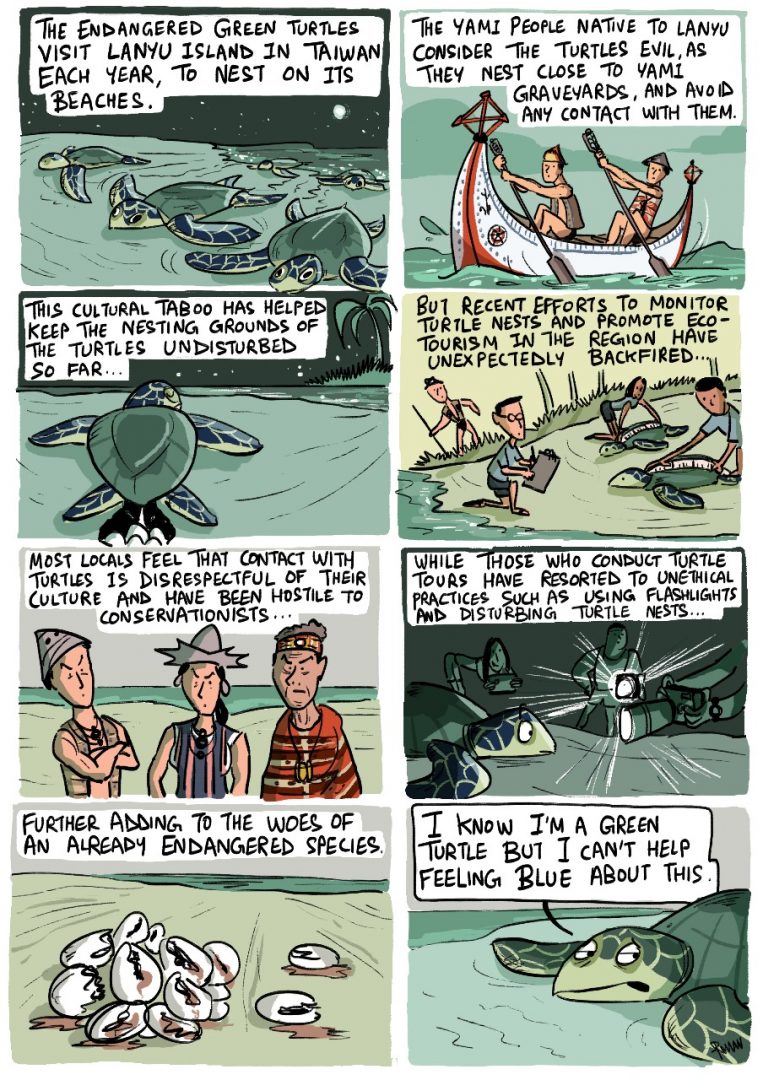 Efforts to conserve wildlife or natural areas may be met with hostility from local communities, especially if access or livelihoods are reduced. Most projects consider the economic impact of their actions on local stakeholders, but cultural beliefs can have as strong an effect on local support for conservation and are often overlooked when designing projects.

Since 1996, a local conservation organisation on Lanyu Island, Taiwan, has monitored nesting sea turtles, moved threatened turtle nests to safer locations on the beach, and promoted ecotourism as an economic incentive for turtle conservation. However, their activities have not been supported by the local ethnic community and conservation staff have experienced overtly hostile reactions. To understand this response, Tzu-Ming Liu from the National Taichung University of Education in Taiwan conducted a study in 2017. Liu found that the Tao/Yami ethnic group consider sea turtle nesting beaches to be taboo areas due to their proximity to traditional graveyards. Moreover, since turtles nest on these taboo beaches, they are considered to be evil spirits. Since interactions with such areas and objects are forbidden, the actions of conservation staff are regarded as dangerous and disrespectful. When the conservation organisation tried to involve members of the ethnic community in ecotourism, it attracted people who disregarded both, cultural and conservation rules. Such tour guides ignored advice on how to behave around nesting turtles and often disturbed nesting turtles. As a result, ecotourism itself has become a threat to the sea turtles whereas local cultural taboos aided in the protection of nesting sea turtles and their eggs from the threat of poaching. However, conservation staff are concerned about other threats, such as coastal development, and believe there is a need to continue their activities.

The study concludes with the recommendation that investing more effort in communication between the conservation staff and ethnic community would help to increase understanding about each other’s perspectives. The study also suggests that direct interaction with the turtles, such as moving threatened nests, should occur only in extreme circumstances so as to respect local customs. Finally, as ecotourism in the area is creating further conflict, and is now a new threat to the turtles, the study suggests that it should be suspended and another economic incentive for local involvement in conservation should be considered.

Tzu-Ming Liu. 2017. Unexpected threat from conservation to endangeredspecies: Reflections from the front-line staff on sea turtle conservation.Journal of Environmental