When young, male elephants live in herds. As adolescents, they wander looking for new areas to occupy, and as adults, they settle down and lead largely solitary lives. However, for a young male to find a suitable area for himself, he will sometimes have to travel vast distances, often through human-occupied areas like fields.

A study conducted on male African elephants shows that the high nutritional content of cultivated crops corresponds with an increase in body size. This explains why elephants venture into agricultural fields, even though they sometimes have to cross highways, railway-lines and other human-occupied areas to do so. 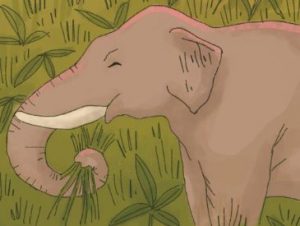 A new research paper found that adolescent bulls were not all solitary or in mixed-sex groups. They had formed stable relations with other males in a similar age class. According to researchers, risky environments showed an increase in group size.

The paper also showed that the availability of resources and the level of risk arising from humans inhabiting certain areas play a more important role in the formation of all-male groups.

Moreover, the elephants that fed on crops were in a significantly better body condition than those that foraged in forests. Better body conditions mean that elephants have more body mass, and can stay in musth, a period where they experience a rise in reproductive hormones for longer. All this indicates that the formation of the all-male groups could be an adaptive strategy in Asian elephant populations in a human-dominated landscape.

Older, more knowledgeable males play a pivotal role in all-male groups, as younger males mimic their behaviour in uncertain situations. Without the older bulls, these adolescent males would probably be more anxious in unfamiliar surroundings and prone to reacting more instinctively, and perhaps more aggressively. When devising management and conservation strategies for elephants, it is important to pay special attention to adolescent males, while keeping the protection of older bulls in mind.

S. S. Pokharel, B. Singh, P. B. Seshagiri, R. Sukuma
Lower Levels of Glucocorticoids in Crop-Raiders: Diet Quality as a Potential ‘Pacifier’ Against Stress in Free-ranging Asian Elephants in a Human-Production Habitat

Nicole Pinto works with FERAL, particularly on the Frontier Elephant Programme to communicate stories about the changing behaviour of elephants in human-dominated areas, as well as with farmers to find proactive approaches to mitigate conflict.

Samyuktha S is a Chennai-based product designer who finds joy in drawing, studying and interacting with the natural world. She particularly specialises in black pen illustrations but is currently exploring the wonderful world of colour.