Slow lorises are small, nocturnal primates that occupy a wide range across southern Asia including western Indonesia, parts of India, Myanmar, China, Thailand, Vietnam, Laos, and Cambodia. The first time I saw a slow loris, I was across the world in landlocked Denver, Colorado, browsing YouTube on my couch when a recommended video appeared depicting a cute, furry mammal with giant eyes. Before me, an owner of an illegal pet slow loris proceeded to “tickle” the animal while it threw its arms up and stared deeply into the camera with its large pouty eyes. This video led to another video depicting a slow loris holding a cocktail umbrella, a slow loris eating a rice ball, a slow loris being brushed.

How had an animal that only exists on the other side of the world end up in someone’s home in the U.S. being filmed, laughed at, and cooed over? 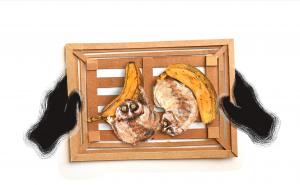 Journey of a Captured Slow Loris

The journey of the slow loris begins in the jungles of Southeast Asia. Primates are among the most ubiquitous species affected by illegal wildlife trade, with the slow loris being under extreme pressure due to their high demand as pets. There are five species of slow loris that are generally recognized, and all five are currently listed as either endangered or vulnerable. Since 2007, every one of these species has been banned for international commercial trade in the United States. Despite this ban, and aided by a lack of initiative from law enforcement and a lack of international awareness, slow lorises remain endangered and the demand for them remains high.

This high demand for slow lorises motivates poachers and hunters to collect the animals from their natural habitats to sell into the black market. Because the slow loris is small and lightweight, it can be easily transported in baskets, boxes and sacks, with some accounts even mentioning them being tied to poles or sticks. If the animals are destined to be sold at local markets, this journey is often short but extremely stressful. Other slow lorises are prepared for international transport – a lengthy journey that often has extremely poor conditions. These animals are reported to have high levels of transport-associated health problems such as stress, injuries, dehydration, and exhaustion.

While a complete picture of mortalities of captured slow lorises has not been well described, the physical and behavioral impacts of the illegal wildlife trade on slow lorises is devastating. In a 2018 study following 77 greater slow lorises who were confiscated from the illegal trade and brought to Cikananga Wildlife Center in Indonesia, 28.6 percent of the total slow lorises and 100 percent of infants died within six months of capture. Of the surviving slow lorises, 25.4 percent displayed abnormal behavior. Reports from rescue centers consistently demonstrate these high mortality rates and high rates of abnormal behavior from primates rescued from the wildlife trade.

As the only venomous primate in the world, handling slow lorises involves a presumed risk when humans get close enough to pose a threat. To create their venom, the slow loris mixes oil from the brachial gland in their mouth, then uses their powerful toothcomb (long, flat front teeth arranged like a comb) to inject that venom into their victims. Due to this venomous nature, traders frequently clip the slow lorises sharp lower teeth that create this toothcomb, both to protect their handlers from bites and to make the animals better suited as house pets. The teeth are often removed with wire cutters, nail clippers, or pliers, and many animals die from infection after the process. To a slow loris, having these teeth removed is life changing. The toothcomb is a vital defense mechanism, but it is also used for grooming, socializing with other lorises, and gouging for gum; a staple in the wild loris diet.

After all of this turmoil and stress, the slow lorises that survive these rigorous conditions are sold in the marketplace or auctioned off on the internet. Unable to ever be released back into the wild, these animals are destined for a life of captivity in a private home, as “photo-props” for tourists. The lucky few that are rescued spend the remainder of their days in rehabilitation centers.

But how did this once unknown primate indigenous to southeast Asia become such a desired worldwide phenomenon? The increasing use of the internet and the access it provides has allowed this species to be shared and traded in ways that were never possible in the past. 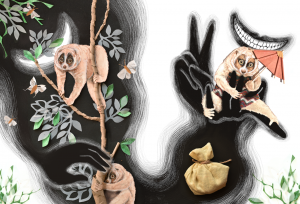 Wildlife Trade in the Age of Social Media

The owning of wild animals for companionship and entertainment has been a part of human culture throughout history. Records of a diverse range of exotic companion animals date back to both Ancient Greek and Ancient Roman culture. However, demand for these exotic animals has increased exponentially with the use of the internet and social media, which is now becoming the medium of choice for illegal wildlife traders. And slow lorises are one of the most well-known faces of this internet-driven craze.

Online videos of slow lorises frequently show them in close proximity to humans – wearing clothes, or using human-made props. This viral domestication creates the illusion that they make suitable pets, and overlooks the devastating fact that the slow loris species is both threatened and endangered. Online viewers often comment “how cute” and ignore their ecological and biological needs, causing misconceptions about the animal to form and grow. What viewers think is “cute” i.e. raising their arms, clinging to a cocktail umbrella, or eating strawberries, is in fact them displaying response actions related to high stress, such as defensive movements, crouching, mouth folding, freezing, attacking, scratching, or vocalizing. In these online videos, the primal responses of the slow loris are skewed and depicted instead as the animal being ticklish, singing or smiling. These videos normalize and glorify exotic and cruel pet ownership.

Celebrity social media accounts have added an additional element in the glorification of owning exotic pets such as the slow loris. In the tickling video, there were over250 comments about how the viewer discovered the video because of a celebrity promotion. In 2013, pop icon Rihanna Instagrammed a picture with two illegally traded pygmy slow lorises in Thailand. When celebrities blatantly ignore laws banning ownership of illegal animals and openly share content depicting wild animals in captivity, their followers may view their actions as acceptable.

People push boundaries to appear adventurous on social media. Therefore, tourist attractions involving direct physical contact with wild and exotic animals are becoming more prevalent, particularly using captive wildlife as photo props. Many people that fall for these tourist traps do not know that most of these animals were obtained illegally, are privately owned, and often live in poor conditions not suited to their needs.

Slow lorises, particularly, are often misidentified by hashtags on Instagram as a lemur, monkey, or bushbaby, showing that many tourists do not know what animal they are posing with, let alone anything about its ecology or conservation status. Additionally, 17 percent of slow loris photos on Instagram showed the nocturnal animals paraded in bright daylight, and 62 percent of the photographs featured the slow lorises dressed in clothing. A further investigation into one of these tourist traps in Marmaris, Turkey showed the nocturnal animals being photographed awake during the day or with flash photography during the night which can be damaging to the slow loris’ light sensitive eyes and cause health problems from the disruption of natural sleeping patterns. They were also being stored behind a small DJ booth, and being fed unsuitable foods including fruit wedges taken from cocktails.

The future of the slow loris may seem bleak after learning how these animals are used for entertainment both at home and as tourist attractions, but there is still hope for a better life for many of these small primates. The living conditions of these slow lorises are a result of both lack of knowledge and lack of empathy for these smaller beings. However, the path to a better future for these animals and many others begins with educating the general public and promoting positive changes in consumer behavior. And that can start with us. 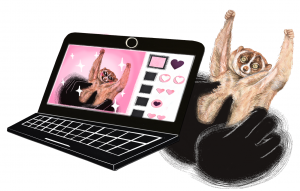 What Can You Do

A majority of us do not own exotic pets or even know anyone who does, but that does not mean we are not actively participating in the promotion of exotic pet ownership. Taking selfies with wildlife for social media likes promotes the idea that these animals are well-suited to be around humans. Even if the animals are legally owned, in the wild, in a rehabilitation centre, or in a sanctuary, the picture is still actively glorifying the animal selfie.

The most effective strategy is to change our attitudes around exotic wildlife, stop posting pictures with them, remove photos you may already have posted, and encourage friends and family to do the same. In fact, many sites like Instagram now allow you to report photos of wildlife exploitation. Instagram works with wildlife groups such as World Wildlife Fund, TRAFFIC, and World Animal Protection to spread education about appropriate interactions with nature and encourages mindfulness when posting photos with animals.

While social media sites are often villainized in the scope of the illegal wildlife trade, they also hold a great power to spread education and awareness to a large audience. Commenting on posts, channels, and websites when you see something immoral can have a huge impact. As consumers of these apps and websites, we can hold people accountable for the content they choose to share and can open up a place for learning when we see animals being exploited.

The animals that fall victim to the illegal wildlife trade cannot speak for or defend themselves against harmful people and situations. It is our job to be their voice by reporting videos and photos that exploit animals and by educating people when opportunities present themselves. Slow lorises gained much of their popularity as pets through social media, but this power of technology also can be used to spread knowledge and change the perception of human-wildlife relationships.

Riley Hamrick is an ophthalmic technician who recently completed a Master’s degree in Conservation Biology through Miami University. Her passion lies in resolving human-wildlife conflict.

Labonie Roy is a self-taught mixed media illustrator and nature lover. In her spare time, she enjoys growing plants, repurposing her old clothes and zero-waste DIYs.