Your social media likes could be killing pangolins in India 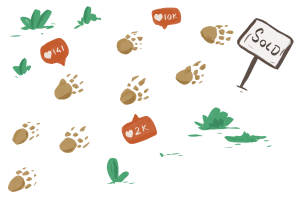 Trafficking of body parts and products made from rare and threatened wildlife species are highly lucrative businesses for organized cartels. This business
severely exploits poor and vulnerable forest-dwelling communities who are usually unaware of the risks and costs involved. In India, a range of species are illegally hunted and traded; some of them, smuggled abroad by trafficking networks. Commonly traded species from India include reptiles like star tortoises, sand boas, and geckos; birds including parakeets and owls; mammals including the Tibetan antelope, musk deer, civets and large cats; large woody trees such as red sanders and teak as well as several rare medicinal and ornamental plants, particularly orchids.

Technology, social media and communication tools play an important role in facilitating wildlife trade through bringing together the nexus of middlemen
and buyers based in cities and towns with the hunters who are mostly from villages virtually. Middlemen share videos and pictures of threatened and protected species online to their colleagues and contacts online, attracting buyers and therefore, enabling the trade and trafficking of endangered species.

No single group of animals has been more affected by illegal wildlife trade than pangolins, a group of medium sized, toothless mammals with horny
scales covering their body. These scales protect the pangolins from ants and termites, which is their principal diet. Along with the scales, their long tongue
and prehensile tail gives them the appearance of a reptile. Of the eight species of pangolins distributed across Africa and Asia, two are found in India, the
Chinese pangolin (Manis pentadactyla) and the Indian pangolin (Manis crassicaudata). They are also unique in belonging to their own order (Pholidota) and family (Manidae), highlighting their unique evolutionary history. 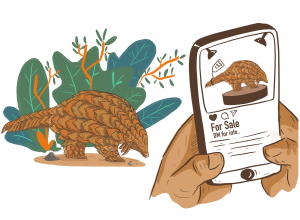 All pangolins are under severe threat throughout their range due to the domestic and international demand for their meat, scales and skin. In particular,
the four species of Asian pangolins (Indian, Chinese, Sunda and Philippine) are all highly endangered and could face extinction in the next decade. Since
the populations of the four Asian pangolin species have plummeted, traders are turning their attention to the relatively more common African pangolins.
Consequently, pangolin seizures are increasingly that of African pangolins.

Based on the surveys and community interviews during the course of our project on the Indian pangolin in the Northern Eastern Ghats of India, we found that the most frequently used methods for hunting pangolins were

1) identifying and digging the burrow;
2) tracking the foot and tail prints;
3) waiting at the burrow for the animal to emerge and then hitting them with sticks on the head;
4) use of dogs in tracking them and identifying their dens;
5) setting fire to their burrow entrance to smoke them out, and
6) tracking them at night (since pangolins are nocturnal).

These methods often overlap and are used in combination. It is reported that the pangolins are extremely easy to catch once they are sighted. A local who hunted several pangolins before recollects, “Dogs track pangolins to their burrows. If we find them outside, they don’t even run away, they turn into a ball. We cannot pick them up directly, as their scales will cut our hands. We hit them on their heads with sticks, and they open up. Then we hit woman we interviewed recalls, “I have seen this, eaten its meat many times. When my husband was alive, he and a few others used to hunt it, they used to dig them out of their burrows with spades.” However, people now realize the commercial value of pangolins in the wildlife trade market, and are trying to keep it alive till they find a buyer and sell it. Pangolins fetch steep prices locally and in the international market, and this is the greatest incentive for its hunting. Some researchers feel
that since money is the greatest motivator for hunting pangolins, any strategy which seeks to ask communities to forego that lucrative activity should start with identifying other conservation friendly and economically profitable activity.

Pangolin parts, particularly their highly sought after scales, are composed of keratin, the same material that makes up human fingernails and hair. Keratin
is not known to have any medicinal properties. This is the case with most other wildlife parts, which are made of the exact same materials as human body parts. Breaking widely held myths about the purported medicinal properties of wildlife is vital trade though, remain the grassroots communities, particularly forest dwelling people who coexist with these species. Unless they are made the main partners in conserving pangolins through community initiatives, the situation may continue to worsen rapidly for pangolins and other endangered species. The convergence of various stakeholders, most importantly forest dwelling communities, researchers, government departments and NGOs, in devising strategies to break the web of poaching and wildlife trade is therefore essential to save pangolins and other threatened species from extinction.

Vikram Aditya currently works as a postdoctoral research associate at the Ashoka Trust for Research in Ecology and the Environment, Bengaluru, on a project focused on developing models for assessing the contribution of biodiversity to agricultural productivity, food and nutritional security and livelihoods

Prajwal Acharya is an engineer turned self-taught artist. What started as a small hobby has now become his passion, which made him quit his job and move to the hills. And now he spends his life just creating art.