My work allows me to travel to remote villages in the Indian Himalayan states of Jammu and Kashmir, Himachal Pradesh and Uttarakhand. I communicate with villagers, eliciting their experience and perception on whether and how various technologies being implemented in their area, under the Department of Science and Technology’s TIME (Technology Intervention for Mountain Ecosystem)-LEARN programme, is helping them. These technologies which range from sustainable agriculture, balancing forest use and conservation, disaster management, renewable energy use etc. directed towards the upliftment of the poor and marginal mountain communities, aim at bringing indigenous traditional knowledge and scientific expertise together, and mould them into sustainable practices, conserving the richness of the local ecosystem, and strengthening local livelihood at the same time. 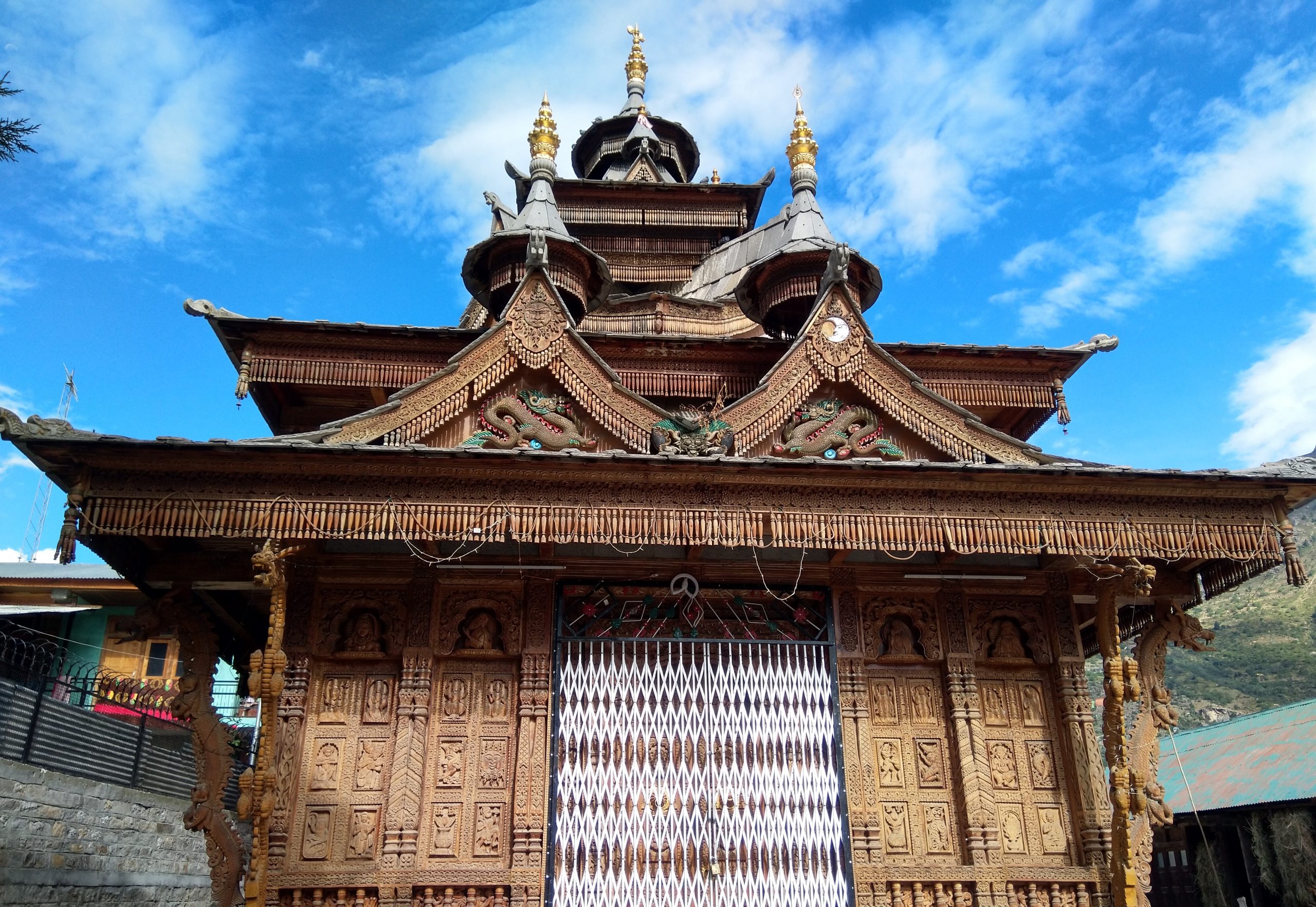 His answer was echoed by many of his ilk in the village. People were keen to bring in expert help to improve their production and harvest, and even try other fruit varieties like kiwis, peaches etc. that might do well in the region. Their interest to equip themselves with information regarding virus-free planting material and methods was evident through their participation in the awareness training held over the last three years by the Indian Agricultural Research Institute (IARI) team from Shimla. The villagers’ interest in the programme was not guided by the mere provision of ‘free planting material’ or woolly aphid treatment. Rather, their innate zeal to learn and adapt to the changing conditions propelled them to take part in such a programme. Through the course of my fieldwork, I noticed how the villagers of Batseri never blamed external factors too persistently. Before this experience, I had never heard of this village. I merely identified the big, red apples in the city markets as Kinnauri apples, but owing to this field visit, I now realise how each of those big, red apples had been tended to by the hard work of an apple farmer in some obscure village in Kinnaur. 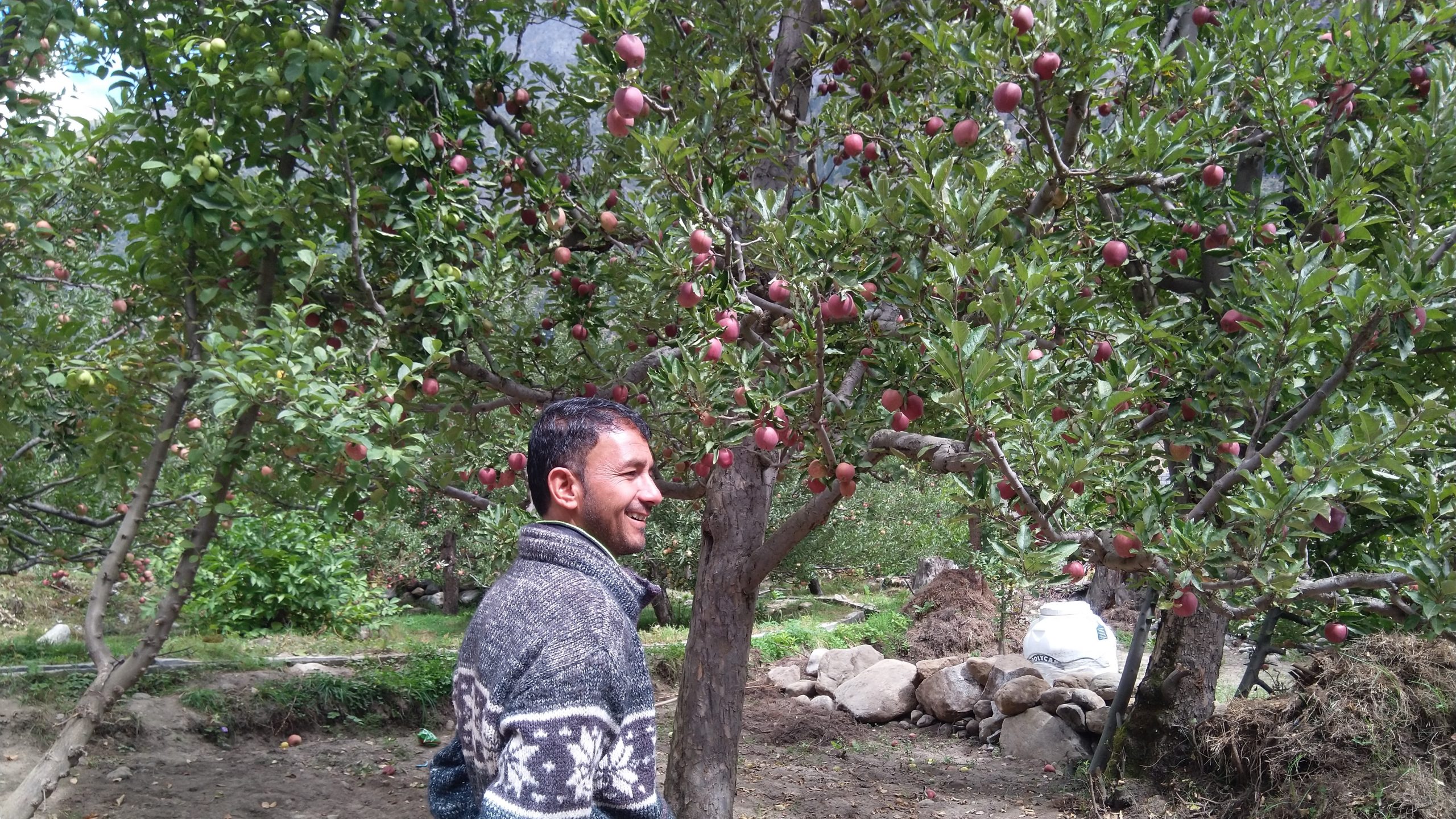 Sh. Trilok Singh of village Batseri was all smiles showing around his apple trees. Photo by: Juno Negi

In the last one year, I have to been to about twenty villages across fifteen districts of the three North-Western Indian Himalayan states, interviewing more than two hundred villagers – poor in material wealth, but rich at heart.
From Sh. Nek Ram (name changed) of village Pasoli, Dehradun to Sh. Rigzin Delek of village Padum, Zanskar valley, Ladakh, I have lost count of the number of teas and conversations I have had in total, meethi chai, feeki chai, namkeen chai (tsa cha), gud and chai, kaali chai, nimbu wali chai, Stevia chai. With each sip of the tea that I had with the people, I took in a different thought, but a common message
“…iss saal sirf char sau peti seb hua!”(This year we sold only 400 crates of apples)
“…baaki sabziyon par to asar hai botanical ka, par tamatar par asar nahi!”(The botanicals are effective against other vegetable diseases, but not tomato)
“…iss heater mein 15 minute mein paani garm ho jata hai!”(This water heater boils the water in just 15 minutes)
“…Yeh trolley lag jaye toh hamara roz ka nadi paar karna bahut aasaan ho jaega!”(Once this ropeway model is approved, it will be easier for us to cross the river)

My task was not to merely enumerate the verbal responses but to decipher the hidden answers and analyse the whys behind them, and with that, I realised how each individual, each community, each village, each state had its own story to tell. Why an intervention had better reception in one village than another; why people in one state have chosen to stay and tackle the difficult conditions, while those in another have opted to move out; why conservation seems so easy in some areas than in others. The everyday problems faced by individuals in similar geographical regions manifest in similar ways. But when it comes to the larger picture of a village, district or state, factors like the history of the region, literacy levels, people’s perception and attitude, policy interventions and exposure to outside influences act in tandem to present the final picture. Reflecting on the Batseri example from my study, I see how much weight lies in the hands of the people. If people in a village decide to work for themselves, if the head of the village is progressive and dynamic, if the youth are educated and motivated, factors like a changing climate, lack of government aid (especially in the form of free provisions), lack of employment opportunities etc. become secondary. Once people understand how the cause-effect cycle operates around them, they become more open to new interventions and learn to adapt in their own capacities. In no way am I underplaying the climate, governmental, or policy factors, but putting the will of the people in a proper direction with the right thrust and learning can arm them with the means to find their own ways. The role of the government must be to become a backbone that has to be there throughout to support them, meanwhile, also allowing the flexibility to attempt their own ways to steer through.

Most of the young population from the mountain villages moves out in pursuit of job security and a seemingly better lifestyle. But today, the current pandemic has put the idea of better employment and lifestyle in jeopardy. As mountain regions brace for a reverse-migration of population, the brunt of holding back its people in their native place, and at the same time sustaining the mountain livelihoods and resources, rests in the hands of the government till the hard-working people in villages like Batseri take back control over their own progress.

Tale of an avian trickster

Missing the forest for the tiger