Many of us have heard about shark fin, elephant ivory, pangolin scale, and even tiger bone trade. But what about the trade in other, lesser-known, less charismatic species? Hundreds of species of Asian songbirds are currently threatened by illegal and unsustainable trade—a phenomenon known as the Asian songbird crisis. Often caught from the wild and traded in poor conditions, songbirds end up being kept as pets or are used in cultural practices, such as songbird singing contests and religious releases. Approximately 66–84 million caged birds are believed to be kept on Java alone, but the trade goes beyond that. Birds are traded at both domestic and international levels. Indonesia, Malaysia, Vietnam, Singapore—the list of countries involved in the Asian songbird trade goes on, with some species being sold even in Europe despite international regulations.

Researchers, conservation practitioners, and law enforcement agencies are working hard to tackle the crisis and to slow down the catastrophic decline of songbird populations in Asia. Scientists are conducting field and genetic research, zoos and local NGOs breed threatened taxa for reintroduction, various organisations run community engagement and education activities. Conservationists and governments refine legislation, while law enforcement authorities make sure it is properly implemented. To coordinate conservation efforts and address the crisis in a more efficient manner, the IUCN SSC Asian Songbird Trade Specialist Group was formed in 2017 and currently includes 79 professionals tackling the Asian songbird trade.

However, bird extinction and biodiversity loss, in general, are not only concerns for conservation biologists. The art community has become increasingly involved in conservation by fundraising for and raising awareness about various threatened species. In this article two artists, Sofiya Shukhova and Tom Henderson, share their experiences with exploring the Asian songbird crisis through an artistic lens, creating art about this issue, and engaging fellow artists and the general public.

Researching the Asian songbird crisis through an artistic lens

In my artistic practice, I always try to focus on conservation issues that have received less coverage. In 2019, when looking for a new topic for my art, I discovered the practice of keeping Asian songbirds—a common threat to many bird species of Southeast Asia, where I live. Creature Conserve, a non-profit supporting artists and scientists to study, celebrate, and protect animals and their habitats, awarded me a scholarship to research this topic using art. Through visiting and collaborating with Planet Indonesia, FLIGHT, and TRAFFIC, I dived deep into this topic, saw the trade with my own eyes, and connected with various stakeholders from law enforcement agencies to poachers and local communities. All three organisations kindly allowed me to shadow their teams to better understand the issue, how to tackle it, and the organisations’ role in the process.

Based on my fieldwork in Malaysia and Indonesia, I created a series of artworks, each being inspired by different aspects of the trade: trapping techniques, singing contests, bird markets, and more. I first had an opportunity to showcase my works to fellow artists and conservationists in Singapore during my short art residency in Art Outreach in 2020. It was their feedback and additional insights into their work that helped me improve my works further and scale them up before I could finally exhibit them and show them to the public.

In 2021, my personal exhibition about the Asian songbird crisis opened in the Timiryazev State Biology Museum in Moscow. The exhibition included four sections: Birds in the wild, Birds as part of culture and traditions, The Asian songbird crisis, and Saving the birds—each looking at the songbird trade from a different angle and together showing its complexity and raising awareness. This exhibition helped me to see the public reaction to the ‘art for conservation’ storytelling format and get additional feedback. It is with this information in mind that I plan to adjust and bring the exhibition to Southeast Asia next year.

It took almost two years from the beginning of my research to the first exhibition. Along the way I met many passionate conservationists and artists, and together we created something special—a series of art interventions to tackle the Asian songbird crisis. Through my exhibition, a collaborative art workshop conducted by Tom Henderson (whom you will meet next), and sharing songbird art on social media, we hoped to have contributed to the public journey of informing, learning, caring, and inspiring change.

I initially approached Sofiya through Creature Conserve about running a workshop, to which she suggested we frame it around the Asian songbird crisis. The plan I proposed involved creating a repeatable surface pattern in collaboration with participants, each bringing their own understanding to a shared piece. We would be bound by a unified theme and agreed presentation of the outcome, but it was for the individuals to suggest what they thought was important to include in the pattern and why. Participants could create their artwork using any media they felt was appropriate and together we would compose the design.

Coming from a position of distance—physically and informatively—research for the workshop was necessary to understand the crisis that songbirds of Asia are facing. From a creative background, the value of research has always been impressed upon me. However, sources are hard to come by without knowing exactly what you are looking for. This is where the intersection of science and art is strongest. Specifically, it is the connection formed of scientists and artists actively sharing. From my position as a creative person, I wanted to spend some time understanding the subject before considering what the most important points might be. Sofiya linked me up with Serene Chng, a researcher studying the crisis first hand. With their shared understanding and research articles, I took in as much as I could to support making the pattern an authentic and accurate representation of the threats to these birds.

The workshops were an opportunity to open up a purposeful discussion about the Asian songbird crisis. In particular, our goal was to use our shared understandings to create bridges for an audience to be informed. The format of the outcome provided two collaborative opportunities to understand more about the birds, and so better communicate their plights. In the first instance, to make themed artwork with other artists, and in the second instance, to involve a consequential audience in the discussion in the hopes they too would continue the sharing. To make the latter point more effective, the surface pattern we were designing had to be more than a nice piece of art; it had to have a function. So, we designed it to be printed as a single tile for the cover of a notebook or sketchbook. When joined up to another cover, the resulting repetition of the tile might stimulate conversation as the cover owners put together connections (literally) to better understand what the design was communicating. Previously half-visible illustrations would become whole. The lives of the songbirds were complete and an audience had been unified. The participants brought curiosity, enthusiasm and open minds to the workshop and resolved this creative challenge to make a piece of work we were all proud of and, importantly, was effective.

The pattern did not just feature negativity, it had to show hope as much as it had to show threats. Science provides facts. It says what is. Art can say what could be. Art can inform scientists what to research next. Art is more than designs. It is problem-solving and critical thinking. It is a tool for communication and community. Here, the relationship between science and art becomes reciprocal. Both inform and inspire each other.

Art as part of conservation strategy

We must not underestimate the effort of conservationists fighting the sixth mass extinction, but in current times they are unlikely to be able to save all the threatened species and ecosystems on their own. People from various walks of life can contribute their skills to help, and creatives are no exception. Although the impact of art interventions for conservation may be challenging to measure, they are still as needed as other education and raising awareness programmes. Art can be a powerful tool for grasping viewers’ attention, sparking curiosity, and creating change.

A template for this positive action is found in the David Shepherd Wildlife Foundation’s Artist of the Year competition, which raises funds to go to conservation projects and engages an increasingly broad number of people with nature-themed artwork. Artists from around the world are encouraged to explore the threats facing the animals in their work. Positive change can be made on individual scales, too. Tom has raised small monies for charities like Wader Quest by creating themed artwork on wading birds, donating proceeds onwards. His illustrations are informed by science and conservation, promoting learning of the species depicted and encouraging donation and further study. The illustrations not only reach those familiar with the species but also those new to wading birds through wider sharing on social media.

Similarly, Sofiya has created artworks featuring species affected by the wildlife trade and human-wildlife conflict in Southeast Asia to donate them to several organisations and events to raise awareness and funds, including the fundraiser of the Singapore-based wildlife rescue centre, Animal Concerns Research and Education Society. She also designed and painted an education room for the kids in Save Vietnam’s Wildlife project where she used her art skills to create an engaging environment for the younger generation to nurture interest and care for local animals, such as pangolins, civets, and small cats.

Not only does art impact the viewer, but it also leaves an imprint on the creator and their community, making them catalysts for spreading awareness among new audiences. Their artworks continue to reach new people even after the events end and inspire other creatives to explore the topic.

Collaboration between conservationists and artists is key to this new approach of tackling biodiversity loss using art. Thanks to conservationists who shared their knowledge with Tom and Sofiya and enabled in-depth research of the Asian songbird crisis, they created more informed and therefore more impactful art. Imagine what you could do to raise awareness for other creatures under threat too. There is no better time than now to create art to support the natural world around us. What will you do?

Sofiya and Tom thank Creature Conserve for funding Sofiya’s fieldwork and Tom’s workshop and for supporting their art practices. 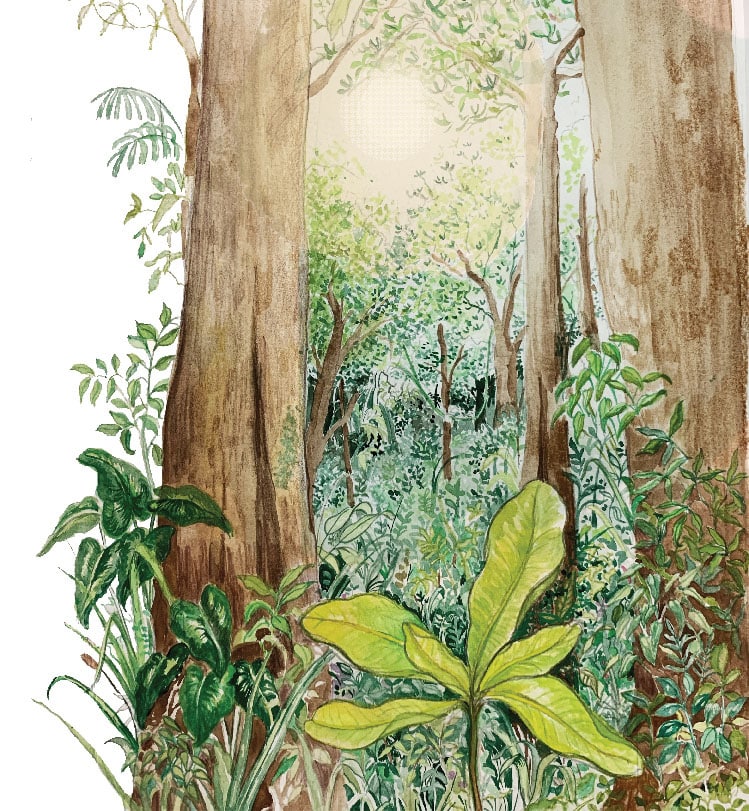