I never knew spiders were so fascinating, bizarre and cool until about 20 years ago when I started doing research and documentation on them! And so whenever I get the opportunity I make sure I tell everyone the wonderful natural history storiesof the spiders that are around us, with the hope that this will get more people interested and awed by them. I hope you will discover your own cool spiders and spider stories and you will pass this information to others as well!

Here are some of my favourite spiders. Do keep a close look out for them, you may find many of them in your own backyard. 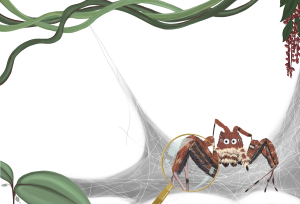 She looks very much like a piece of moving debris. Meet Portia, a spider of the family Salticidae or jumping spiders. Lab and field experiments by scientists have shown that the
Portia spider is very intelligent and has amazing vision. A spooky fact about her is that she loves to eat other spiders – the animal kingdom is indeed strange, eerie and wonderful.

Portia spiders hunt their prey by trickery, stalking and stealth. They trick other spiders by pretending to be a mate of the spider she is hunting. She also sometimes pretends to be a
struggling insect caught in a web just to lure her prey. When the unsuspecting spider comes to investigate, our Portia pounces, catches, and injects it with venom.

Scientists who study Portia spiders say that she uses different hunting techniques depending on the type of spider she hunts and modifies her hunting behaviour accordingly. Smart and cunning? Definitely! 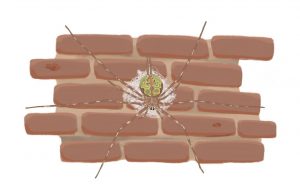 Flat against a tree trunk or on walls, are the skittish andquick-footed two-tailed spiders of the family Hersiliidae. Two-tailed spiders blend in so beautifully against the surface that they reside on that you need to peer and follow the silken trail lines they leave behind to spot them. Their common names come from the very prominent and long silk spinning organs (known as spinnerets) that look like “long tails”. Look out for them on the trunks of trees and on walls – at first you will find it hard to find them, but when you get the hang of spotting them you will start seeing them everywhere! They are a great example to showcase camouflage in the natural world! And you thought only chameleons can camouflage well?

Spider? Or ant? Look for clues!

When you look at this spider, you will never be able to tell that it is, indeed, a spider. As many people will attest it is terribly confusing to decide what one is looking at! This group of spiders that mimic ants, not only look very much like them, but also exhibit the behaviours of the ants they mimic! 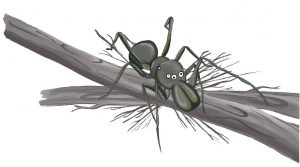 Ants use chemical pheremones to communicate with each other and find their own family groups. Some antmimic spiders are known to mimic these ant chemical phremones.

By mimicking these ant pheromones, some species get access to the nests of ants and to feed on the ant eggs. But they are not doing this just to find food, but also to avoid their own predators. Many insects, birds and other spiders avoid feeding on ants because ants are usually aggressive, and can be quite untasty! 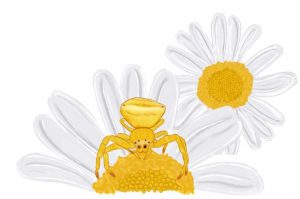 With the first two pairs of longer enlarged legs and posture, the crab spider indeed has an apt name. Belonging to the large diverse family group Thomisidae, if you peer closely at flower heads you will sometimes find them cheekily camouflaged and nestled there. Here, they wait for unsuspecting insects like bees. Bees fly to flowers for the sugary
sweet flower nectar that they get in return for their pollination services.

If you move a white crab spider to a yellow flower, given the right conditions after a few days the spider will change its colour to match the colour of the flower it has been placed on! Crab spiders are classic ambushers and it’s always a treat to spot them catch an unsuspecting insect with speed and agility.

Scientists are still trying to find out what the exact role of camouflaging themselves plays because experiments have shown that to their prey the spider is actually not very camouflaged at all! Are they getting any other benefits by blending in with their surroundings? Only more research and experiments will uncover this. 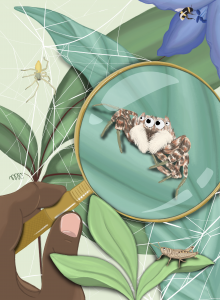 Have you heard of a ‘bola’? It’s a type of throwing weapon where heavy ball-like objects are tied to the end of ropes and thrown by people towards a running object that they
want to stop. You must have seen some cowboy movies where they throw something in true fisherman style?

Bolas spiders use silk and a sticky gum ball attached to the end of this silken line to act like their own bolas! They swing it like a weapon to whack and catch their prey! 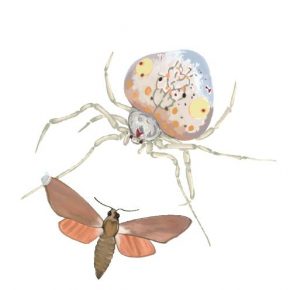 But before that, the spider mimics the pheromones that a particular group of female moths emit. Female moths emit this to attract male moths. When the male moth flies towards the direction to investigate the pheromone scent, the bolas spider is ready. Like a lasso, this sticky line is swung around to whack and then catch and capture the moth! Can you think of a cooler hunting strategy? I recently had the privilege of seeing a female bolas spider close to her freshly laid egg sacs, but because she is active at night I did not get to see her lasso-like hunting moves. I do hope that day comes soon!

Vena Kapoor works on nature education and outreach at the Nature Conservation Foundation, Bangalore. She also documents, conducts walks, talks and writes about the
spiders and insects that she comes across.

Saloni Basrur is an all-round artist who uses multiple media to express herself – from digital illustration to embroidery. She has brought animals to life through her creativity and storytelling and hopes to continue doing so for conservation communication