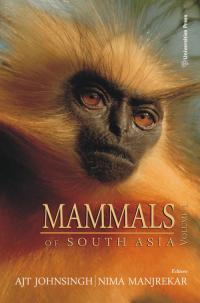 On my first visit to India, I saw more large mammals in a month than in a decade in South-east and East Asia. Naturally I wanted to read up on the wonderful species I was seeing. Prater’s book still did a great job, but so much has been found out since it was written that people have been anticipating, with relish, Mammals of South Asia. After a 17-year gestation, its first volume (of two) is here. About as thick as the binding could take, it covers insectivores, treeshrews, bats, primates and carnivores; the rest will be in volume 2, capped by the mouth-wateringly entitled final chapter ‘Little-known mammal species’.

The superb eye-catching front cover (a Golden Langur Trachypithecus geei) shows a species endemic to South Asia, in great need of improved conservation, and little known by the general public. The many colour plates, sourced from many different photographers and overall excellent, are grouped in four blocks. This presumably makes the book affordable to more people. Many monochrome photographs of animals and habitats enliven the text, although some, unfortunately, have reproduced too dark in the review copy.

Almost four dozen authors wrote the species accounts, giving a great diversity of style. Nonetheless, nearly all chapters share one important attribute: readability. Many species have chapters to themselves, but single chapters cover each of: insectivores; treeshrews; bats; mongooses, civets, linsangs and non-lutrine mustelids (small carnivores); otters; and small cats. These latter vary in structure, from the otters (three sequential species accounts) to the small carnivores (structured by topic, with no species accounts). It must be a matter of personal taste whether to prefer the former (easy to find information on each species) or the latter (gives a good feel for diversity within the group). Irrespective of number of species covered, each chapter contains, typically, a delightful line-drawing, introduction, description, taxonomy, distribution and status, ecology and behaviour, conservation, and references.

The species accounts are preceded by a preface and acknowledgements, an excellent foreword by George Schaller, and a 30-page introduction. This latter sets South Asia’s mammals in global context, with a strong focus on biogeography and endemism. Bizarrely, almost throughout, ‘Palearctic’ is used to mean the true Palaearctic and that part of the Oriental region not in South Asia. This obscures (in, e.g., Table 4, p. xlix) the true zoogeographic affinities of South Asia’s mammals, which lie overwhelmingly with South-east Asia, not with the Palaearctic. ‘South Asia’ itself is taken as India, Sri Lanka, Nepal, Bhutan, Pakistan, Bangladesh and, although few authors give much attention to them, Myanmar and Afghanistan.

Taxonomy and nomenclature are mostly fairly conventional, although some chapters mention modern proposals (e.g. that ‘Grey Langur Trachypithecus entellus’ may be a complex of seven species) and a few adopt them (e.g. that the linsangs Prionodon are remarkably distinct animals that belong in their own family). Unhelpfully, Cuon alpinus is here called ‘Asiatic Wild Dog’. This necessitates starting its account with a stern warning about this misnomer, the species being unrelated to domestic dogs! Why not just call it ‘Dhole’, a name in wide use in the rest of the world? I hope that the chevrotains Moschiola (to come in vol 2) will not be miscalled ‘mousedeer’, thereby requiring another announcement that ‘these animals are not deer’.

Unfortunately, the book is not flawless. A few photographs are mislabelled: Plates 27.40–42 and Fig. 27.3 all show Altai Weasel Mustela altaica, not the species they are labelled as. Some chapters seem to have been written in the 1990s and not updated. The pace of new insight leaves some very dated, such as Red Panda Ailurus fulgens. There are many inconsistencies and errors, mostly small, but sometimes resulting in entirely the wrong message. Perhaps paramount among these are statements about otters such as “In Southeast Asia, there does not seem to be any intentional otter trapping” (p 517): the last 20 years have seen otters trapped to eradication over much of Vietnam, Lao PDR, Thailand, Cambodia and Myanmar! This is a sad reminder of how quickly things can change. The serious researcher must make his/her own exhaustive search of the literature, particularly that published after the mid 1990s.

Despite the foregoing cautions, it is a genuine pleasure to read this book. It succeeds admirably in presenting the species in depth yet accessibly to the general public. The lengthy and, mostly, well-considered sections on conservation are thus very important. This remarkable book deserves to be a key reference not just for those in its region, but for naturalists throughout tropical Asia. Volume 2 is eagerly awaited.

J W Duckworth has spent most of his working life involved in conservation in South-east Asia, with a particular interest in mammals. He has visited India several times for inspiration in this work, and looks at the book in recognition of its regional interest, Will.DUCKWORTH@iucn.org.