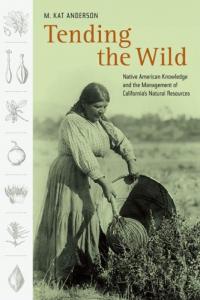 M Kat Anderson’s Tending the Wild has much to offer to a variety of readers. For those interested in history, it provides a succinct but informative summary of how the state and its inhabitants were impacted by the arrival of European explorers. Nature-lovers will enjoy the author’s descriptions of California’s rich biodiversity—particularly its flora. Related to these are accounts of the myriad ways in which the state’s native human populations have long utilised this wealth of natural resources in various aspects of their culture, not least of which is their cuisine. By weaving together all of these disparate threads, Anderson highlights the importance of indigenous knowledge—an incredible force once responsible for shaping California’s landscape and now a powerful tool that can potentially be used in efforts to restore, conserve, and sustainably manage a wide array of wildlife.

Early on in Tending the Wild, Anderson introduces a paradigm-shifting idea that will likely be anathema to many modern readers, and yet is strongly supported by the examples presented throughout the rest of the book: because humans are a part of nature, there is really no such thing as a “pristine wilderness” untouched by anthropogenic influence. Humans are, after all, an animal species like any other, requiring the use of certain natural resources in order to survive; many thousands of years after our exodus from Africa, we are as integral a part of our adopted habitats as any other species that can be found there. The main difference now, of course, is that we have a bad habit of utilising resources in an unsustainable way, thereby endangering not only particular indigenous species, but also entire habitats and ecosystems. Anderson, however, believes that indigenous wisdom can be used to break this habit and facilitate intelligent and sustainable stewardship practices.
It is for this reason that the author takes an integrative, interdisciplinary approach in her book; the connections between historical, anthropological and botanical details are used to outline the long and literally fruitful history of indigenous interactions with native species. A wealth of data—some gleaned from Anderson’s in-depth perusal of the literature, others collected through interviews conducted by the author herself—suggest that anthropogenic activities such as burning, harvesting, seed sowing and coppicing played an important role in shaping the Californian landscape into the productive and aesthetically pleasing “wilderness” described by early European explorers. Ironically, contemporary conservationists wistfully long for this “pristine” condition without realizing that it only existed in the very distant past, long before the original New World inhabitants crossed into the Americas via the Bering Strait. In the time since that event, Anderson argues, indigenous activities likely not only influenced the abundance and distribution of species (particularly plants), but probably also drove the evolution of many traits that allowed wildlife to flourish under anthropogenic disturbance regimes.

Tending the Wild challenges previous ideas about the relationship between humans and nature; it also highlights the amazing wealth of natural knowledge still possessed by native tribes despite all the time that has passed since their ancestors lived solely off the bounty provided by the Californian countryside. Anderson uses her book to unite these two themes in a call-to-arms for conservationists—both those who are interested in wildlife and those who wish to preserve indigenous traditions. The author suggests that many historic native management practices could be reintroduced in order to improve the abundance and health of native species and habitats. This would have the simultaneous benefit of providing indigenous peoples with the materials needed, among other things, to prepare their traditional cuisines and create traditional crafts; in other words, conservation of wildlife would also lead to conservation of culture.

Anderson also points out that the majority of management goals could only be achieved through collaborative efforts involving individuals of a variety of cultural and ethnic backgrounds, thus providing indigenous peoples the opportunity to share their perspectives, beliefs, and traditions with a wide audience. One potential—and desirable—result of this might be the fostering of “a new vision of human-nature relationships and the place of humans in the natural world.” In particular, the author hopes that people of all backgrounds can come to see nature as a place and a process with which they are integrally and intimately connected, rather than something with beauty to be admired from afar, and with riches than can be greedily plundered. The latter attitudes, she suggests, will both contribute to declining ecosystem health and our own feeling of disconnectedness with the landscape, whereas the former will have countless benefits both to the wildlife and our own psyches.

Caitlin Kight, a freelance science editor and writer, is a visiting researcher at the University of Exeter, Cornwall Campus, UK, caitlin.r.kight@gmail.com.