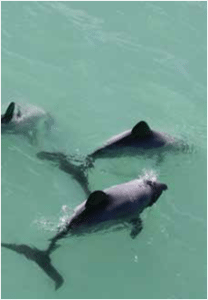 Marine reserves have recently become a major focus in marine ecology, fisheries management, and conservation biology. Traditional management methods are inadequate to address the multiple types of anthropogenic impacts, and marine protected areas (MPAs) have been proposed as an efficient and inexpensive way of managing fisheries. They also simultaneously preserve biodiversity and meet other conservation objectives as well as human needs, though the decisions concerning the design and location of most existing reserves have largely been the result of political and social processes.

There has been little evidence that MPAs have been effective in improving demographic parameters of marine mammals, as many years of data are often required to detect any meaningful biological change. The first evidence that MPAs can work for marine mammals is from a 21-year study undertaken in Banks Peninsula Marine Mammal Sanctuary. The sanctuary was established in 1988 to reduce gillnet mortalities of Hector’s dolphin, an endangered dolphin species endemic to New Zealand.

The authors individually identified 462 dolphins by photographs of their dorsal fin patterns and tracked this population from 1986 (before the sanctuary was set up) to 2006. Using statistical models, the authors analysed survival of dolphins before and after establishment of the sanctuary, and found that the probability of survival of dolphins from one year to the next increased by 6% after the establishment of the sanctuary. This study shows that area based protection of marine mammals is possible, but that long-term studies are required for effective monitoring of areas and species.
Irrespective of the size and species in concern for which the marine reserve is being established, it is paramount that goals are explicitly stated beforehand. These would help in designing the reserve, and are also critical for assessing the success of the MPAs.

Ema Fatima is a research scholar at the Centre for Ecological Sciences, Indian Institute of Science, India. fatimaema@ gmail.com