The Rediscovery of an Ant-ique – the Dinosaur Ant

The searing heat of the Australian outback evaporated into the night and a chill descended, sinking deep into the hollows between the mallee trees which surrounded the impromptu camp. Bob Taylor had itchy feet. Not because of his desert boots (although perhaps that too), but because he was itching to begin his search. In a way it had been over 40 years in the offing and this unplanned delay was trying on the nerves. What he sought was out there, somewhere, in the darkness.

Rewind 100 million years (or thereabouts). Plodding and prowling, munching, crunching and soaring, the dinosaurs were in at the height of their reign – the largest creatures ever to walk to surface of the Earth. Meanwhile, at the other end of the size spectrum, small solitary wasps were embarking on an interesting evolutionary experiment. Their anatomies were undergoing small changes, while at a social level, sisters were beginning to cooperate to raise their young. They were evolving into the first ants. 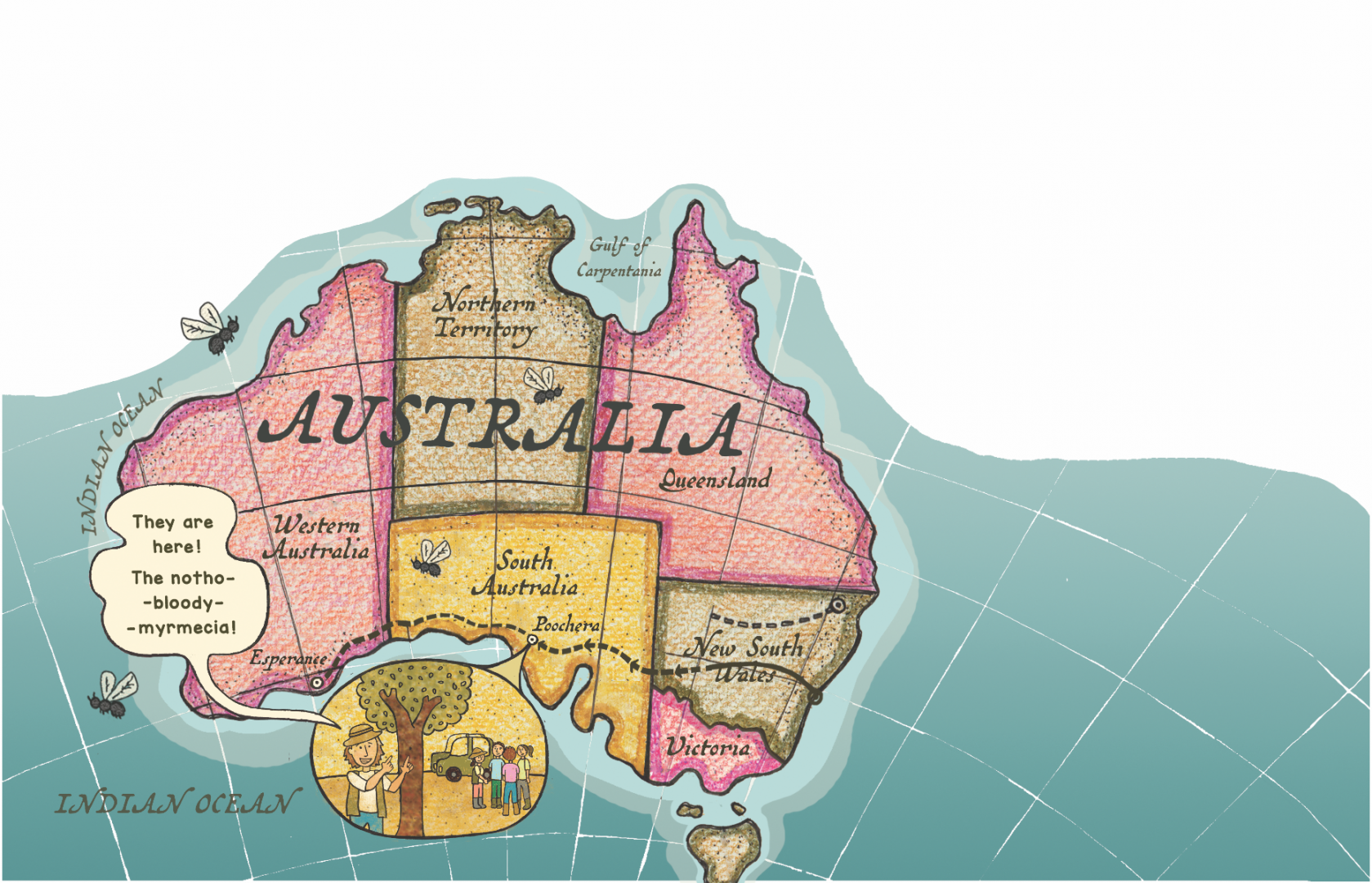 From those early beginnings ants have become one of the most successful and diverse families on the planet. Scientists have identified around 13,000 species so far and it is thought that there are likely many more thousands yet to be discovered. And there is huge variation among these species. Take body size – there is as much difference between the largest and smallest species of ant, as there is between a human and a blue whale. Individuals of one of the largest species, the giant forest ant (Camponotus gigas), are more than 2.5 cm in length. At the other end of the size-range, Carebara atoma are so small that an entire colony of would easily fit inside the head of the forest giants.

Ants have also evolved extraordinarily complex societies, dividing tasks between individuals, ‘farming’ for food and even depositing their waste in refuse dumps and carrying their dead to special areas away from the colony. But there is variation here too. The social complexity of some species is relatively simple and colonies may contain as few as 10 individuals. Meanwhile, some super-colonies contain more than 300 million individuals, each playing their part in sustaining the life of the colony. 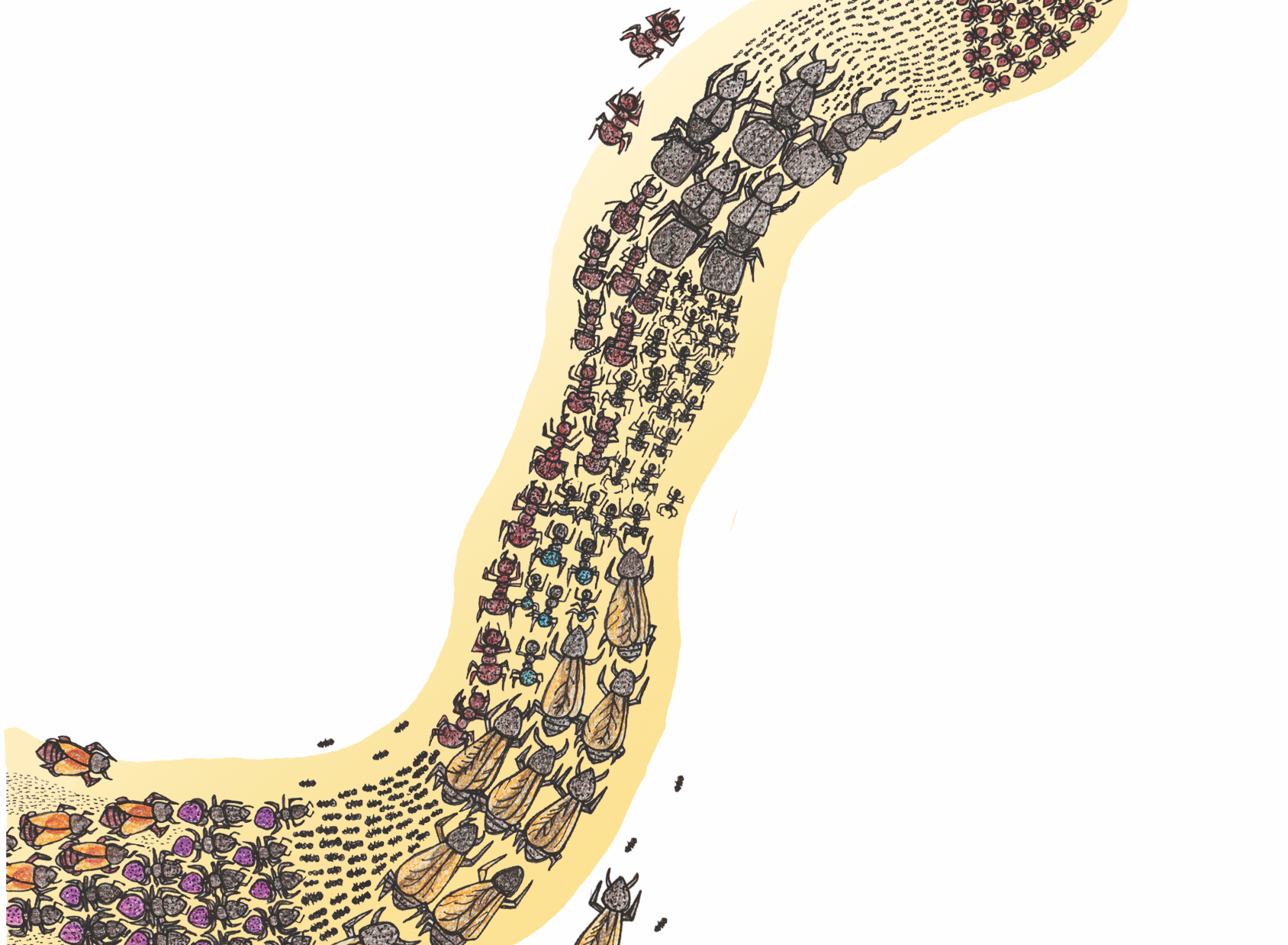 But how did such variation and complexity evolve? In biology, it is commonly assumed that complexity must have evolved from simple beginnings. So in the case of ants, it would be predicted that the first species would have relatively small colonies and simple social systems. However, actually showing this is difficult – how do you study species that were around during the time of the dinosaurs? The answer is – find a ‘Dinosaur Ant’…

So back we go to Bob Taylor and his itchy feet. It is 1977 and Professor Taylor, an Australian myrmecologist (ant researcher), was embarking on just such a search – a Dinosaur Ant hunt. Back in 1931 an expedition across the deserts of Western Australia had brought back two specimens of a previously unknown ant species. These were pickled in alcohol and given to the National Museum of Victoria in Melbourne. Named Nothomyrmecia macrops, there they sat for years, before a leading ant specialist finally recognised their importance. Their bodies suggested that they might come from a species very similar to the very first ants. If a living colony could be found, they could be studied and we might learn more about origins of the multitude of species living today. A number of expeditions went back to the original discovery site, but all failed to find anything. Eventually, rediscovering the Dinosaur Ant became the Holy Grail of myrmecology and Professor Taylor, then chief curator of the Australian National Insect Collection, made it his mission to find The Grail.

An expedition was organised, which would drive from Taylor’s base in Canberra in the far East of Australia, over 3000 kilometres to the original site where the Dinosaur Ant specimens had been found, near Esperance in Western Australia. However, with over a thousand kilometres still to travel, problems with the vehicles forced the expedition to make camp in an area of bush close to the small town of Poochera. After darkness fell, Bob decided to take a stroll and after only 20 paces, let out a yell (his language of course must be excused – he was very excited, and very Australian!). “The bloody bastard’s here! I’ve got the Notho-bloody-myrmecia”. He had found a Nothomyrmecia worker, wandering up a tree trunk, only yards from where the trucks had broken down. Over subsequent years, it was found that Nothomyrmecia did indeed have small colonies, and a form of sociality much simpler than that seen in many modern species. It seemed that this truly was the Dinosaur Ant – a missing link back to the very first ants to roam the Earth, 100 million years ago. 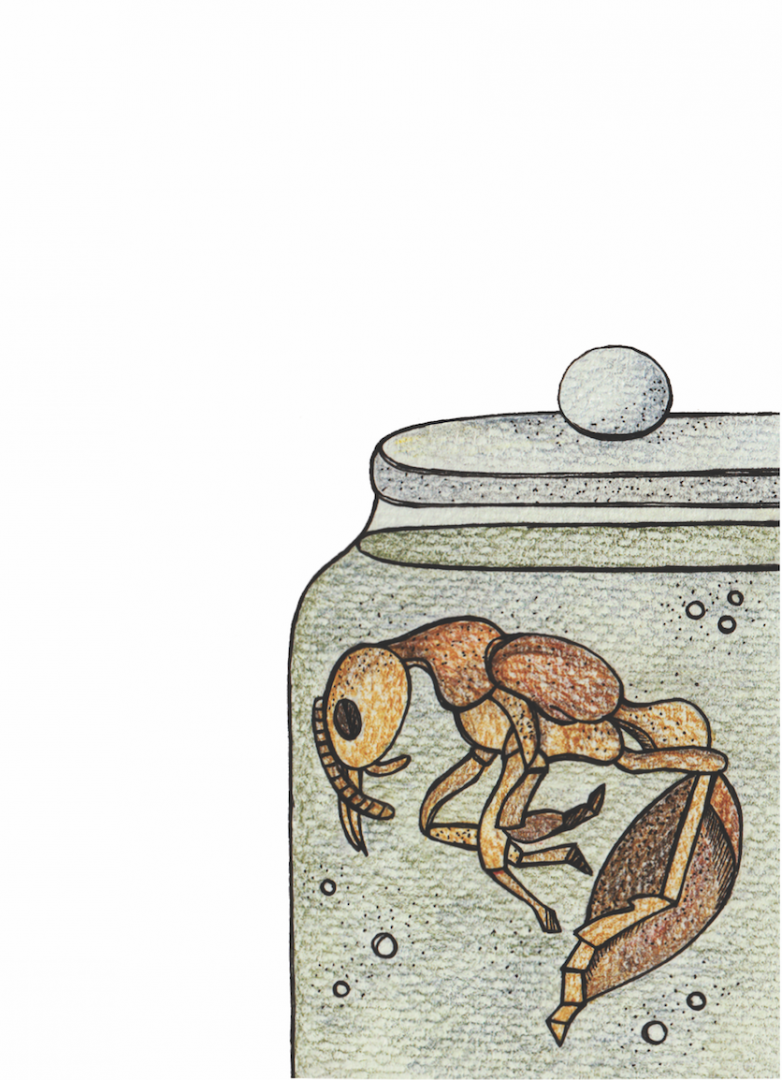 So what can we learn from this? Perhaps that all things really do have simple beginnings, that breaking down in your car can have its upsides, and that letting itchy feet, or a tingle in the bum, push you out of your seat to go exploring, can lead to some wonderful discoveries.

Matthew Creasey is a Ph.D. Researcher at Centre for Ecology and Conservation, University of Exeter, UK. mjsc201@exeter.ac.uk.

Sreeja Basu is a designer and illustrator based in Kolkata. She has studied art and design in Srishti School of Art, Design and Technology, Bangalore and liberal arts at the Young India Fellowship, Ashoka University, Sonipat. Her interest is in child safety and development, gender and sexuality, and education and play.