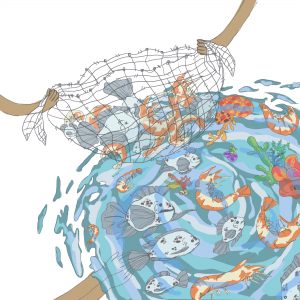 Ocean ecosystems face significant threats from human activities, not the least of which is fishing. According to the Food and Agriculture Organization of the United Nations (FAO), by 2013 approximately 90 percent of global fisheries were either overfished or fished to maximum capacity. The pressure placed on wild fish stocks from fishing, combined with other human impacts, such as climate change and pollution, has put many aquatic species and ecosystems at risk. Aquaculture, or fish farming, is frequently presented as a possible answer to the problems created by overfishing. As fish farms can rear organisms from egg-to-plate, these technological systems can produce valuable and nutritious food, presumably decreasing demands placed on wild fish stocks. More broadly, the substitution or displacement of farmed for wild fish follows a commonly held principle that when one resource is being depleted, it can be replaced with another. Aquaculture technology can act as a sort of “relief valve” for capture fisheries.
In an article in Conservation Biology, Longo et al. (2019) examine whether aquaculture production displaces capture fisheries. The study uses World Bank and FAO data to asses this relationship within nations from 1970 to 2014. The authors develop multiple models to examine whether there is evidence of displacement, while controlling for the principal driving forces of demand including economic and demographic indicators as well as more direct measures of demand, such as consumption of seafood and fish exports.  The results of the study did not provide convincing evidence that fish farming has thus far displaced or suppressed fisheries captures.
According to the study, continued efforts to enlarge seafood production appear to outpace technological efforts assumed to conserve wild species. Thus, the findings suggest seafood production has been structured more toward overall expansion, rather than environmental conservation. There are many explanations for why aquaculture production has not displaced fisheries captures as anticipated. The authors consider important global factors, such as economic growth dynamics, that organize production of seafood and promote demand, and have been shown to greatly influence the development of food systems in general. Also, the study highlights that many aquaculture operations are directly linked to capture fisheries. For example, aquaculture feed often contains fishmeal and fish oil, which are likely to be procured from wild fish captures. In addition, promoting fish consumption through aquaculture may stimulate demand for all types of seafoods. This study underscores the importance of empirically testing such relationships given the importance of these issues to sustainability concerns.

Why we can’t save the bees without changing our behaviour

The ways we use and protect land around streams matter