In Western Maharashtra, India, one  can find several shrines of Waghoba, a deity representing a big cat, both tiger and leopard. The Warlis, as well as several other indigenous communities in the region, worship Waghoba as an integral part of their belief system.

To learn more about this deity and its significance to human-leopard interactions, we—a group of researchers from Wildlife Conservation Society-India, Wildlife Conservation Trust and Norwegian Institute for Nature Research—conducted a study across Mumbai Suburban, Thane and Palghar districts of Maharashtra. From November 2018 to April 2019, we explored the landscape to document how extensively the Waghoba deities were found, and interviewed people within the Warli community (Nair et al. 2021).  By the end of the fieldwork, we had located 150 shrines! We also learnt a  lot about Waghoba, including origin stories, myths, beliefs, iconography, rituals, experiences, and festivals. Through these stories and practices, we got a glimpse of  the ways in which the people of that landscape comprehend the challenges of living with leopards. 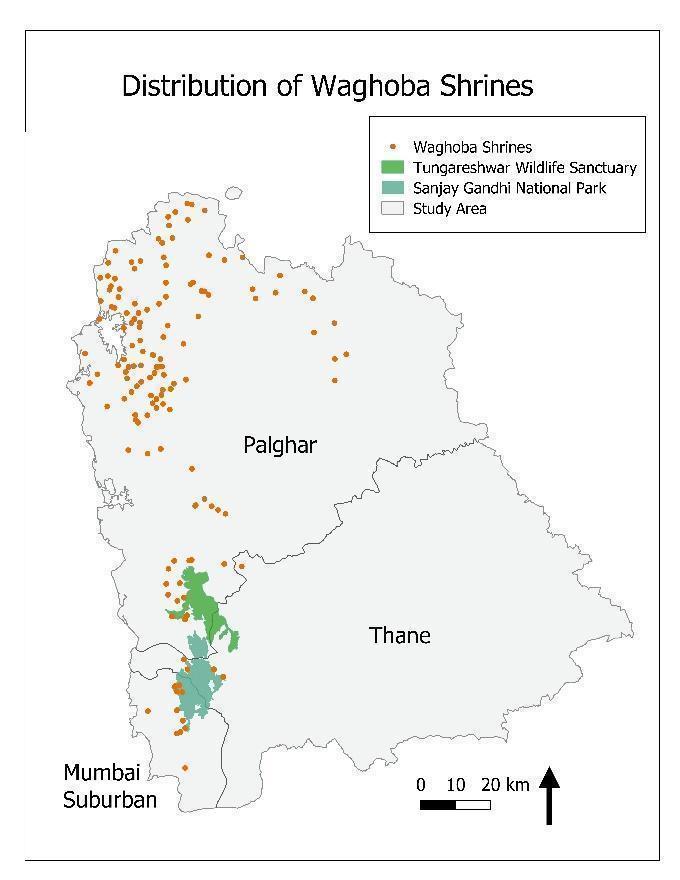 Below is one version of Waghoba’s origin story that was narrated by a Warli interviewee:

‘Human-wildlife conflict’ and ‘livestock depredation’ may be relatively recent concepts for people working in conservation, but narratives such as the above show us that these challenges are not at all novel to the people in this landscape. They are entwined in the stories that have been passed down orally for innumerable generations within the communities.

The origin story narrates how Waghoba, due to his nature, kills livestock and the ways in which his mother negotiates a deal between the people and Waghoba to maintain co-existence. The festival of Waghbaras is a manifestation of this negotiation. Waghbaras is celebrated every year across western Maharashtra, including in the middle of cosmopolitan Mumbai. People offer livestock as a sacrifice to Waghoba, in exchange for his benevolence and protection from danger and harm, especially from big cats.

By listening to their stories and learning about their rituals and practices, we learnt that the people in this landscape don’t see leopards as just a menacing beast. They see Waghoba, and thus the leopard, as someone who is bound by his nature of being a big cat, while also being bound by a promise he has made to his human kin. Such a complex and nuanced picture of the being creates a space for the leopards to survive not only in the landscape but also within the Warli society.

On the wolf trail

Seeking refuge from the storm: a new framework to bolster conservation efforts